It’s Friday, September 13, and we’re having The Mother of All Thunderstorms in Chicago this morning. I hope my ducks don’t get wet!

It’s National Peanut Day.  It’s also Friday the Thirteenth, which many people deem unlucky (I live in a 13-story building, but the thirteenth floor has an elevator button labeled “T”, for “top”.) I wonder if airplanes have a row 13? (I just looked this up and, indeed, some airlines are missing row 13. It’s one of the few examples I know of a company catering to superstition.)

At any rate, it’s also, appropriately, National Defy Superstition Day, as well as Blame Someone Else Day (this is Trump’s own holiday), Bald is Beautiful Day, and Snack a Pickle Day (I didn’t know “Snack” was transitive verb). Finally, but only in Africa, the UK, and Latin America, it’s Roald Dahl Day (Dahl was born on this day in 1916.)

Stuff that happened on September 13 include:

Gage lived 12 years after the accident, though, famously, people reported that his personality changed considerably. It’s instructive to read the Wikipedia entry linked above; you’ll marvel that he survived. Here’s Gage after he recovered, his skull, which was exhumed and preserved, and the big iron bar that went through it: 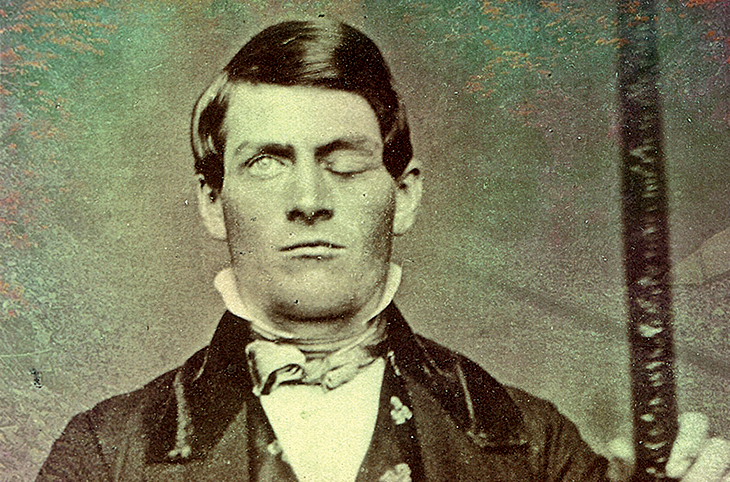 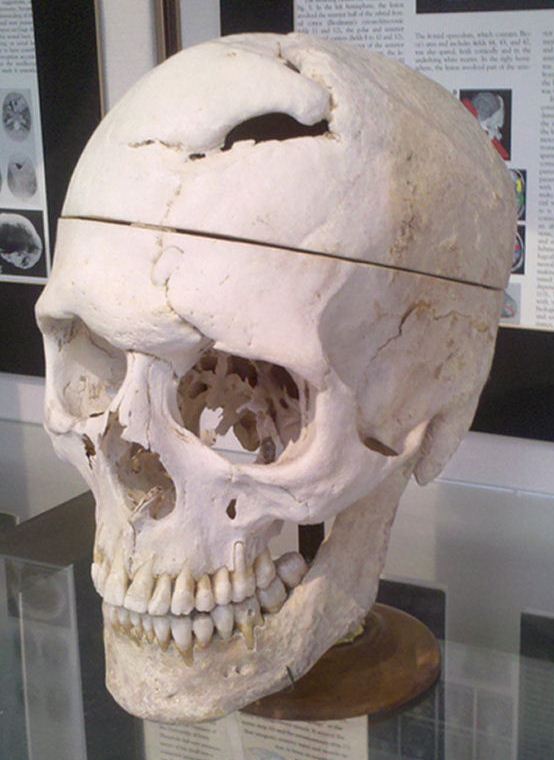 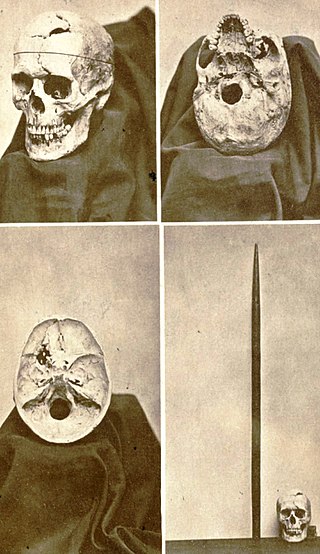 Bliss was disembarking from a streetcar at West 74th Street and Central Park West in New York City, when an electric-powered taxicab (Automobile No. 43) struck him and crushed his head and chest. He died from his injuries the next morning.

Arthur Smith, the driver of the taxicab, was arrested and charged with manslaughter but was acquitted on the grounds that he had no malice, nor was he negligent.

Those who died on September 13 were few; they include:

If you remember the movie Schindler’s List, you’ll remember that the cruel and tyrannical Göth was played by Ralph Fiennes.  The real Göth was hung for war crimes, but the gallows malfunctioned twice, depositing him on the ground, before they finally worked. If you want to see his hanging, with the malfunctions, it’s on YouTube.

Robinson is best known for his complicated Rube-Goldberg-like “contraptions,” but he was also a well known illustrator. Here’s a picture he did for Puss in Boots: 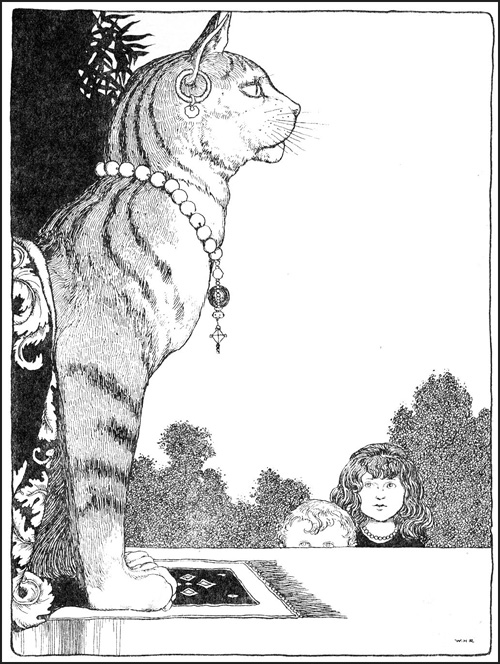 Meanwhile in Dobrzyn, Hili is on the prowl, but not really:

A: Are you hunting?
Hili: I’m just pretending. 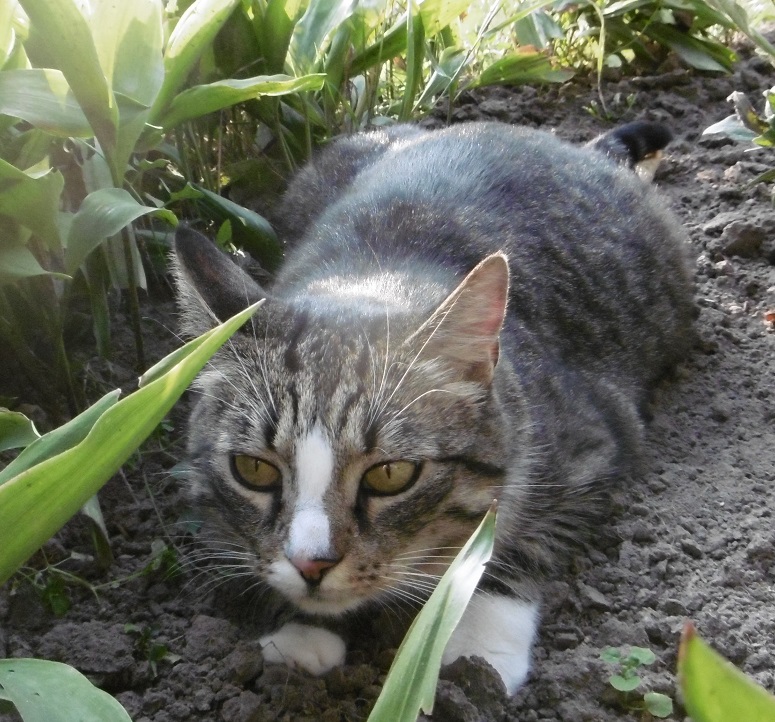 I got this UPS notice yesterday, and informed them via Twitter that they need to check their apostrophes: 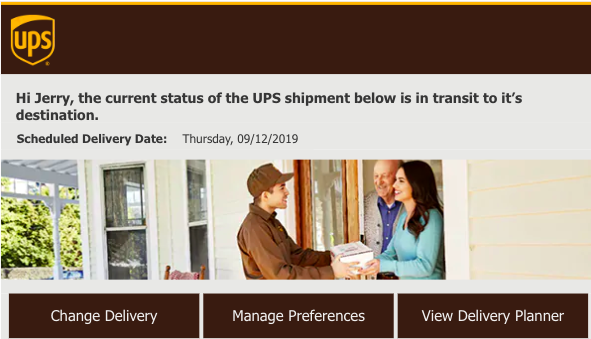 Reader James sent me this altered photo of Trump, with his mouth in the appropriate place: 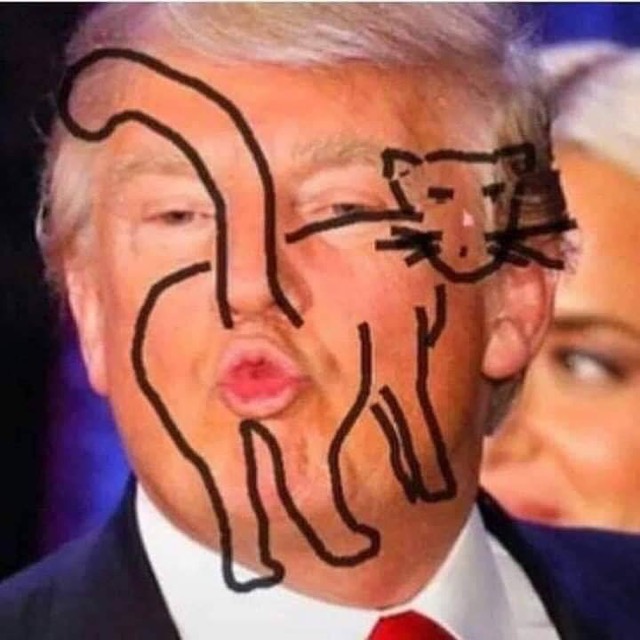 Grania sent me this tweet on April 7; it’s a beautiful photo of my town:

Just when I’m sure I’ve seen every possible photo of the #Chicago skyline, @barrybutler9 proves me wrong. Gorgeous! pic.twitter.com/smb8te1iCe

From reader j.j. Those kittens don’t look that fat to me!

Just time for a quick look at the papers… pic.twitter.com/QmHPPgUvKt

Two tweets from Heather Hastie. This one looks familiar, but I’ll post it again just in case: a cat feels the burn:

This parrot has been taking lessons from the seagulls in Finding Nemo:

Colin couldn't hide his smugness at having the banana all to himself.

Four tweets from Matthew Cobb. The first shows a superb and amazing new explanation for parallel evolution in sticklebacks (read the thread). My take is this: this can’t be “adaptive mutation”, as the “need” for reduced pelvic fins isn’t constant. It must be more or less an accident of DNA structure.

There is an amazing evolutionary biology paper out this week in Science:

DNA fragility in the parallel evolution of pelvic reduction in stickleback fishhttps://t.co/opj2EekUS6

Let’s look at what they did. pic.twitter.com/kigKik1ddu

Happy Science London? Science???? I’d ask her to tell me exactly where the Dow Jones average will be in a week:

Tune in to the Thatcher Seance. What will you ask her? pic.twitter.com/WaXE8Uzx8y

A nice interview with a real young activist:

This seal should be made an honorary cop.