Thanks to Mark Sturtevant for the link to the winners of the Bird Photographer of the Year Contest for 2019. The photos were so good that I’ll put them up in lieu of Readers’ Wildlife Photos today. Here’s just a sample; you can find all the best ones on the site:

The winner for Bird Photographer of the Year is Caron Steele with “Running Pelican”: 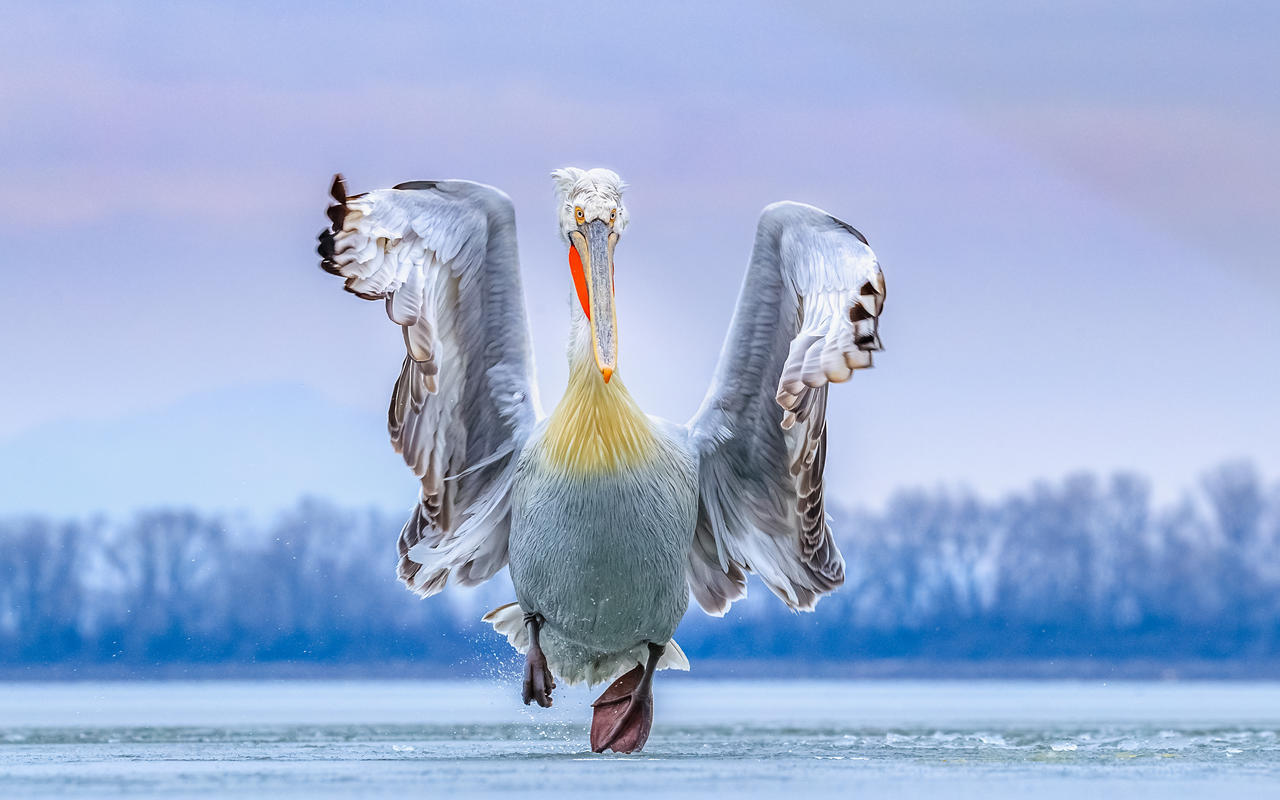 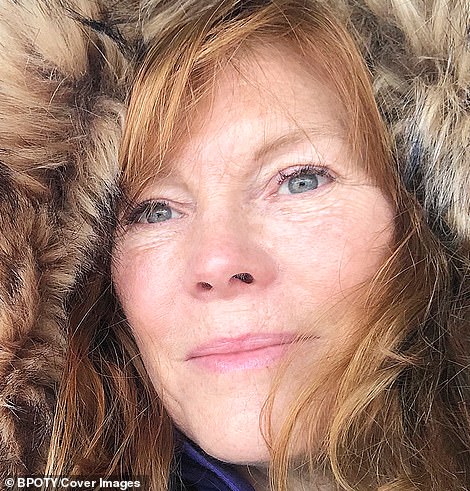 Two from Thomas Hinsche, who won the “best portfolio” award. The first is called “courtship display”, the second is “catwalk,” and the third is “welfare”: 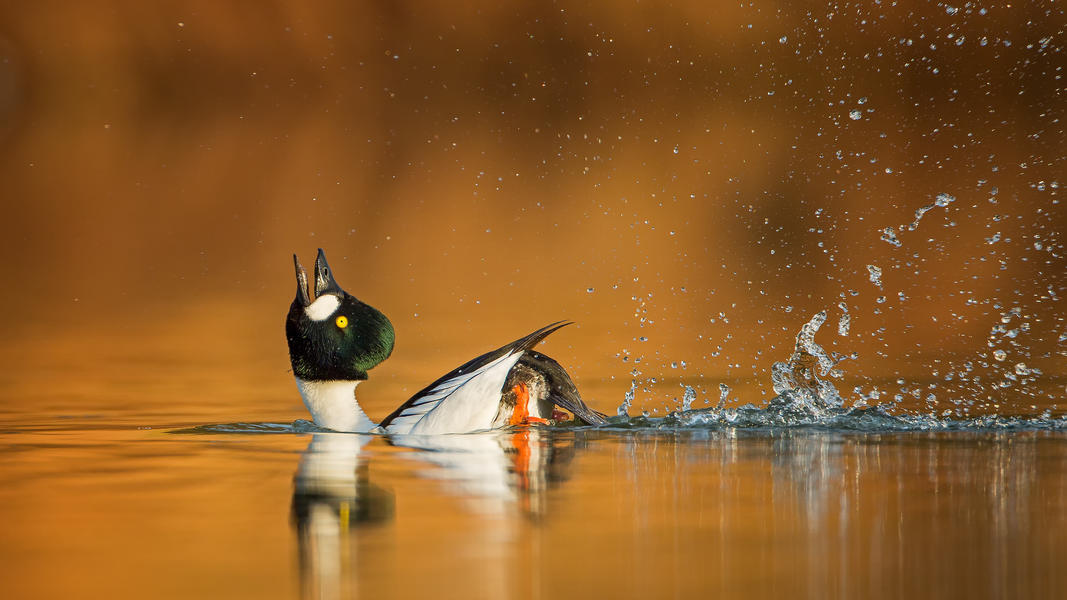 What kind of bird is this? 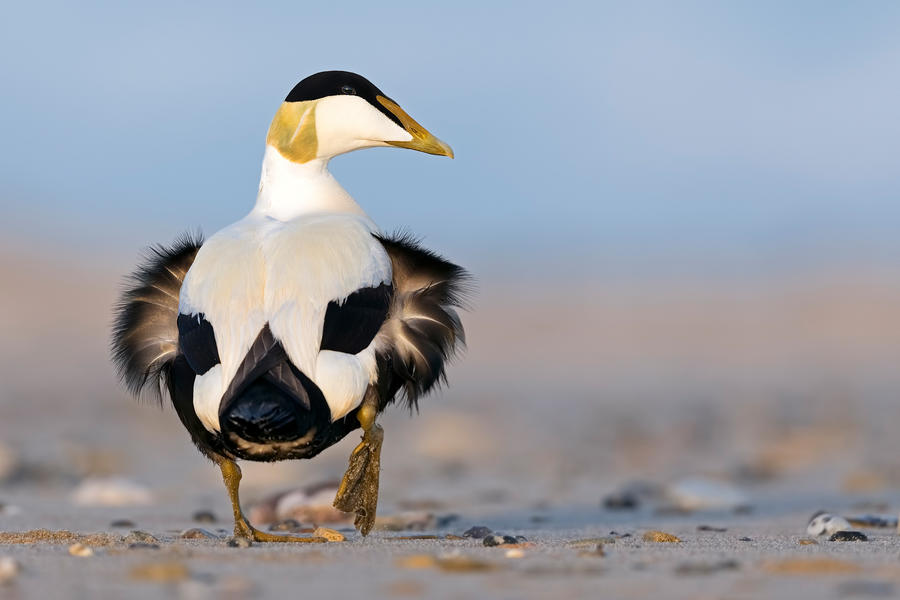 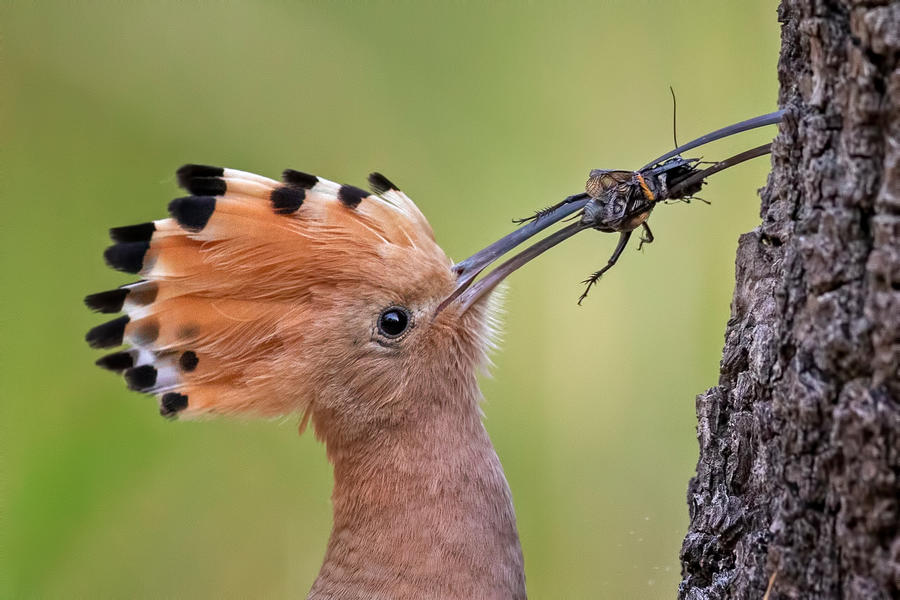 More photos from the Daily Fail summary (their descriptions are indented):

Indian photographer Yashodhan Bhatia received an honourable mention in the garden and urban birds category for this image of rosy starlings at the Ujni Dam in Maharashtra, India. A slow shutter speed was used ‘to create a feeling of movement’ 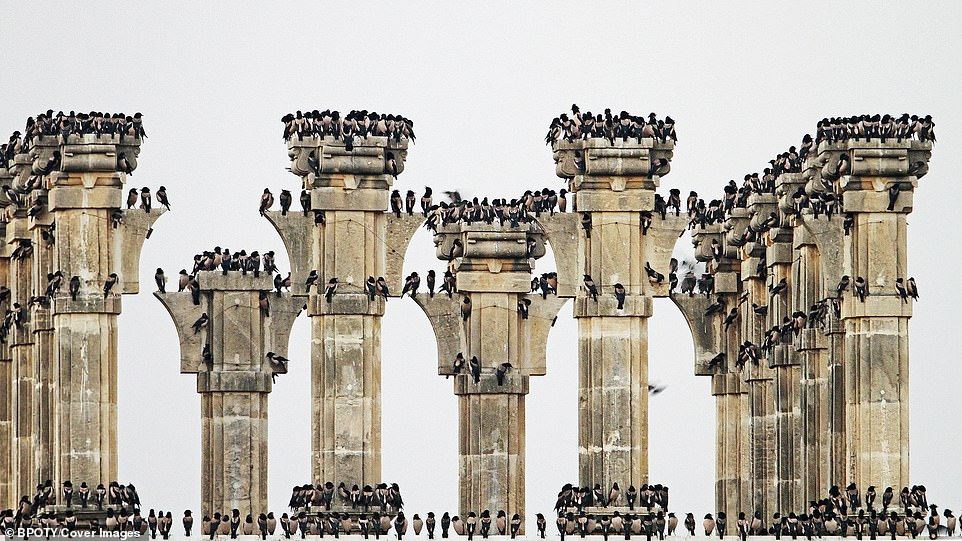 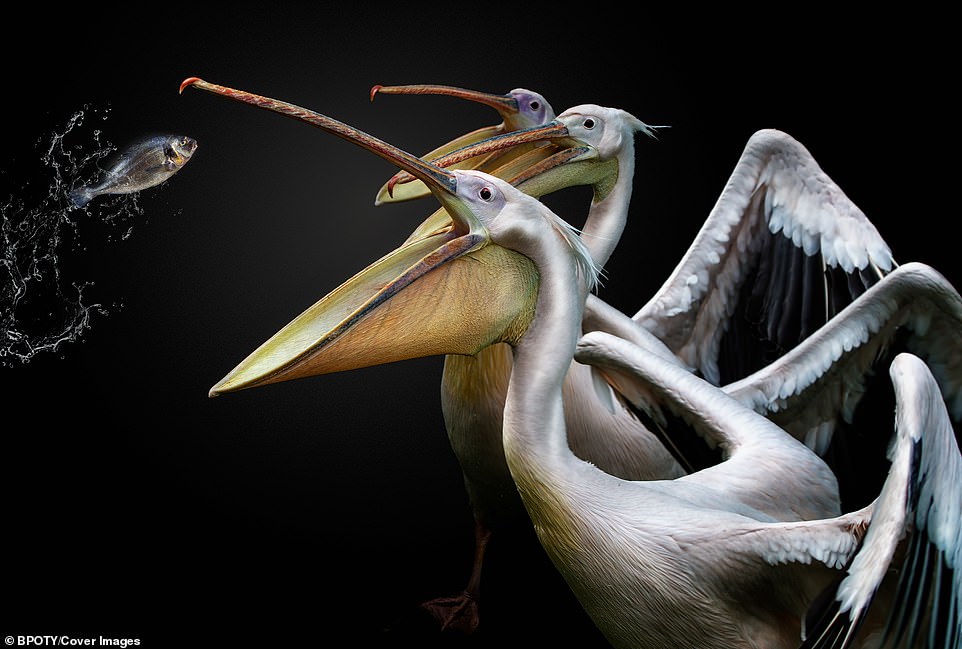 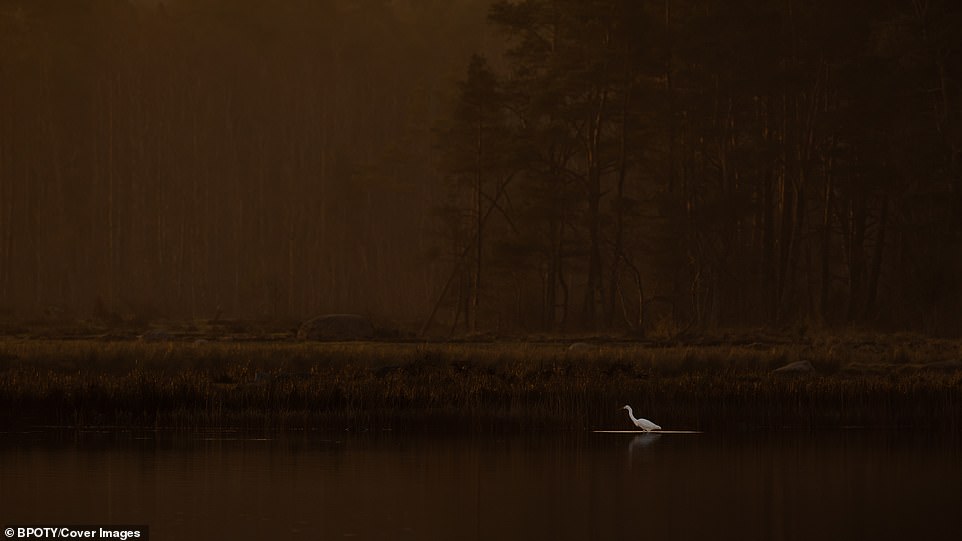 This picture of a common kingfisher was a silver award winner in the best portrait category and was snapped at a bus stop in Hertfordshire by Briton Ben Andrew. He said: ‘This image of a bold young Kingfisher was taken during the winter months. The bird spent time in the middle of a town centre, fishing around ornamental water gardens that are surrounded by shops, roads and a car park. The kingfisher regularly spent time perched on railings waiting to plunge into the water below. This spot was right next to the bus stop, so I positioned myself looking along the railings and waited for a bus to arrive. Luckily the buses in the town are blue, perfectly matching the Kingfisher’s plumage. So it was just a matter of waiting and hoping a bus came along with its lights on while the bird was sitting there!’ 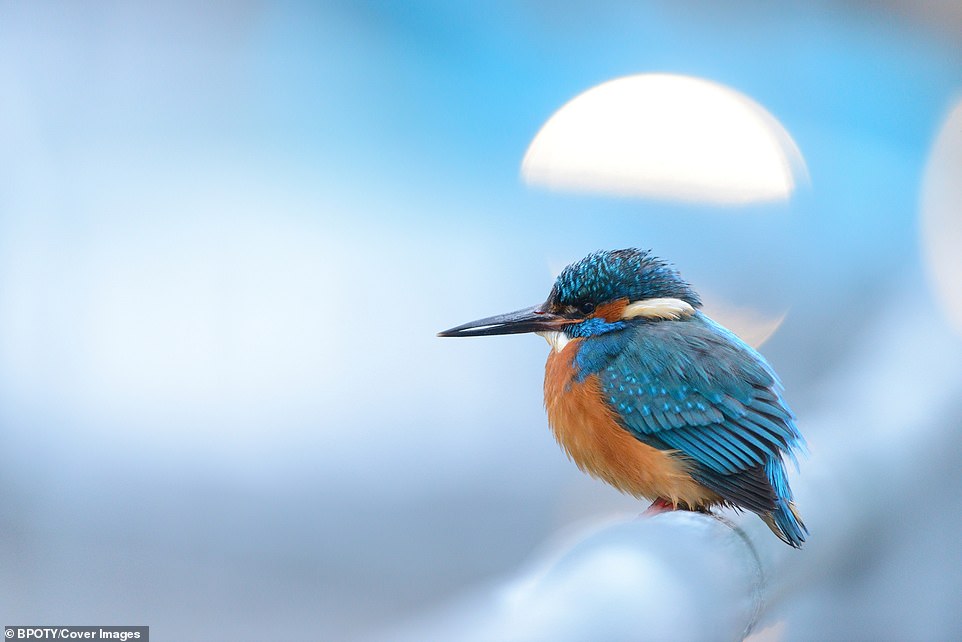 Tamas Koncz-Bisztricz, from Hungary, took this shot of a soda lake in his home country and is this year’s Young Bird Photographer of the Year 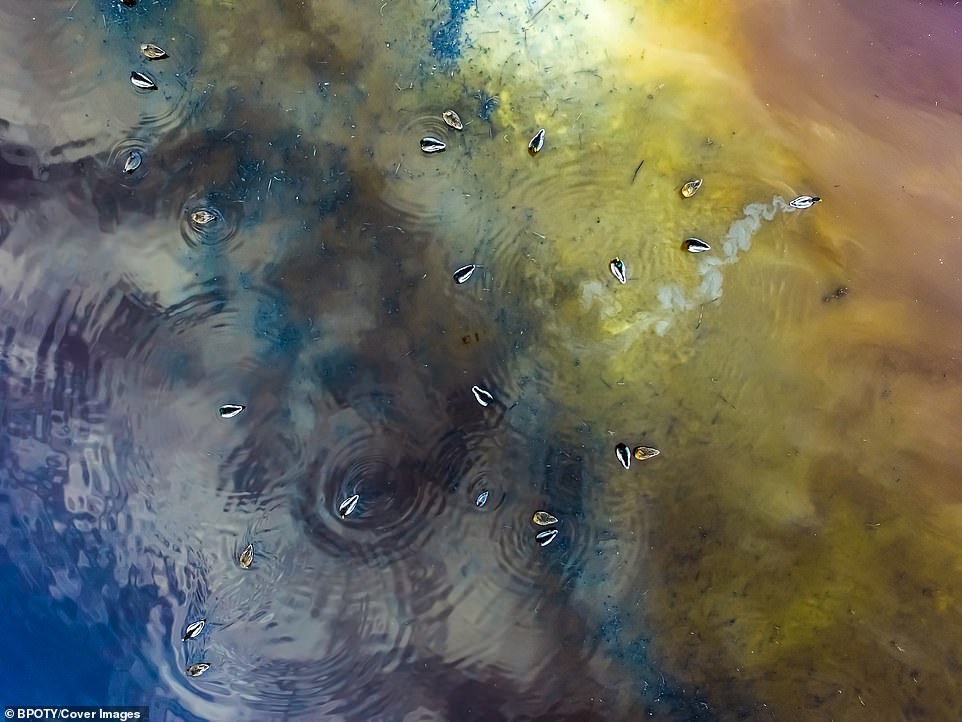 I love this one!

Cobalt-winged parakeets are the stars of this ‘birds in flight’ bronze-award shot, taken in Ecuador by Liron Gertsman from Canada. And it was quite an effort to get it. He said: ‘Scattered throughout the Amazon basin are hundreds of clay licks where parrots, parakeets and macaws come to eat clay and neutralize the acidic fruits that they eat. Getting to the clay lick (and watering hole) where I took this photo required a regional flight, a three-hour boat ride upstream, and a short canoe ride to get to base camp. From base camp, it took another short boat ride and a 30-minute hike each day to get to the clay lick. It took many hours of waiting over three days before we were treated to the sight of hundreds of cobalt-winged parakeets raining down on the forest floor. Seeing them and hearing the deafening roar of parakeet chatter was an experience I don’t think I’ll ever forget. After they drank the mineral rich-water and ate some clay, it was over. This photo captures the chaos as the parakeets took to the air. I used a slow shutter speed to convey movement’ 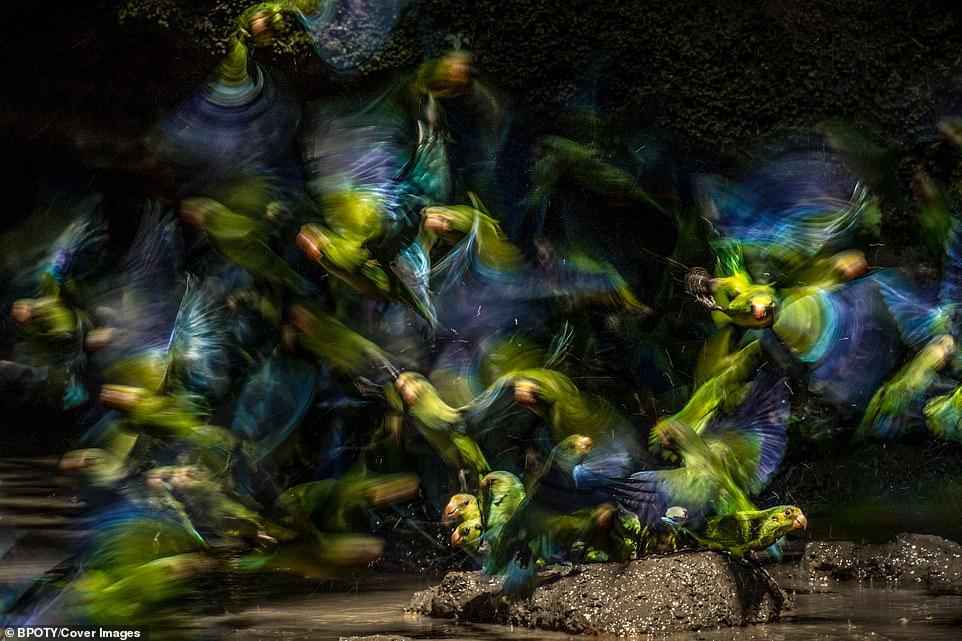 Beak condition: Nikunj Patel from the U.S landed a gold award in the birds in flight category for this image of a black skimmer in New Jersey 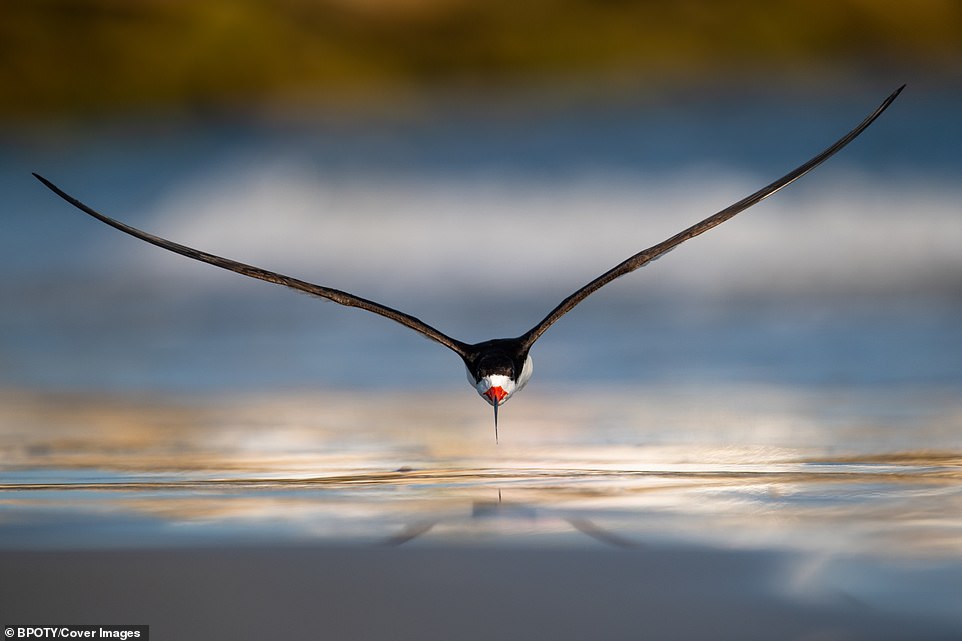 Dare I hope to see something like this in October?

This image of emperor penguins in Antarctica was taken by UK photographer Martin Grace, who earned a gold award in the inspirational encounters category for it. He said: ‘I shot a few images then put the camera away, and for 15 minutes it was just me, the emperors and heaven’ 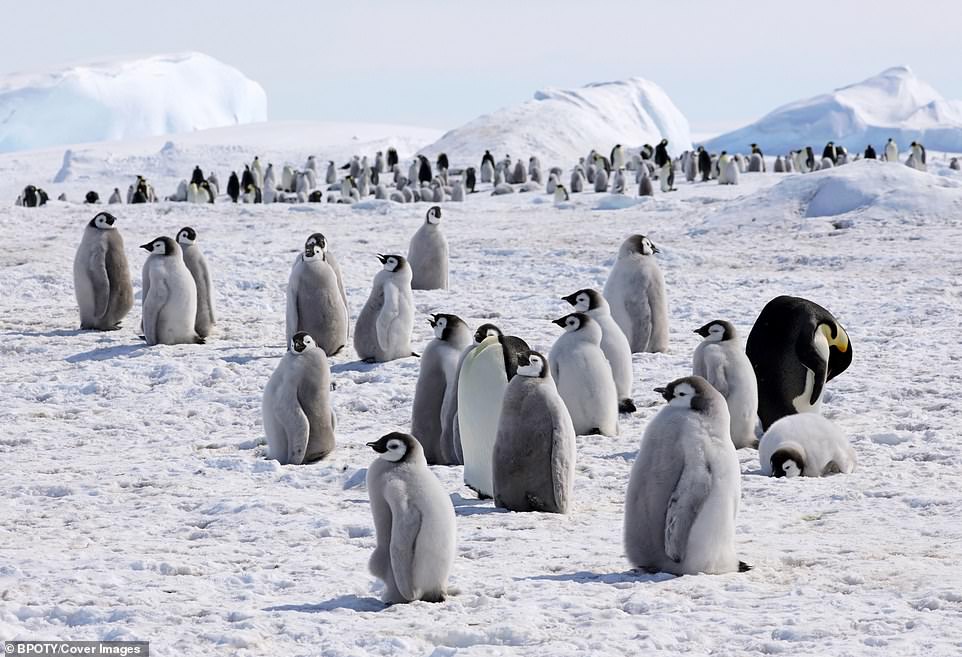 And another duck to finish: 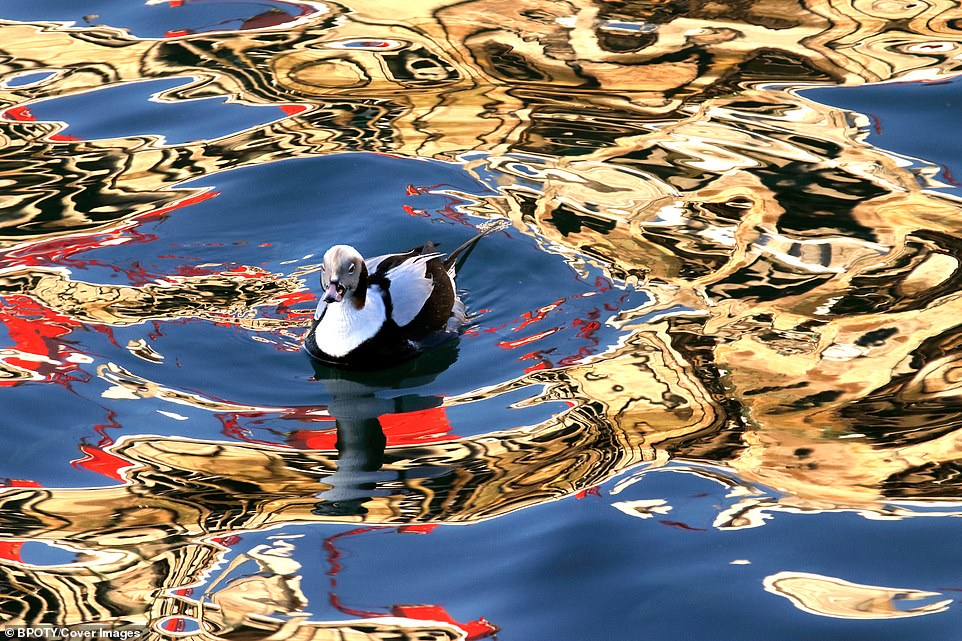 Go here (bottom of page) to see more. The entries are fantastic, and this must have been a hard one to judge.

16 thoughts on “Winners: Bird photographer of the year”