Not long ago I read a piece in Quillette, “The Academic Quarrel over Determinism,” written by William Edwards, described as an “independent scholar” and “founder of Bright Tapestry Data, a company pushing back on misinformation and fake news.” Edwards’ piece, about determinism and free will, seemed pretty muddled, and wound up arguing that even if determinism be true, we should still believe in free will because of the salubrious nature of that belief for our own well being and that of society. In other words, Edwards was asking us to make a Pascal’s Wager about free will (though the stakes are lower than Pascal’s own wager). To wit;

However, it is worth remembering the well-established relationship between risk and reward, because whether or not we believe in free will may turn out to be the Pascal’s Wager of the twenty-first century. With that in mind, any professional gambler worth their salt should bet on free will. There is just too much about the universe that we don’t understand, and the potential pay-off from agency is staggering.

That was too much for me, and so I wrote a response, also in Quillette: “Why We Shouldn’t Bet on Having Free Will—A Reply to William Edwards“. Besides trying to correct some of Edwards’ apparent confusion about free will (i.e., determinism doesn’t equal predictability; naturalism, which includes determinism plus stuff like quantum indeterminacy, does not give us any extra agency), I was almost insulted at the idea that we should believe something for which there’s no evidence because it has good consequences. That’s too much like the Little People argument for religion.

I won’t belabor what you can read in Quillette, but now there’s a new piece that criticizes both me and Edwards; it’s below (click on the screenshot). The author is Ben Burgis, described as follows: “Ben Burgis is the author of Give Them An Argument: Logic for the Left, which is available for pre-order from Amazon and Barnes & Noble. He’s also a regular on The Michael Brooks Show on Tuesday nights and he releases videos every Monday for the Zero Books YouTube channel.” Burgis also appears to teach philosophy part time at Rutgers. But the argument, not credentials, is what’s relevant here. 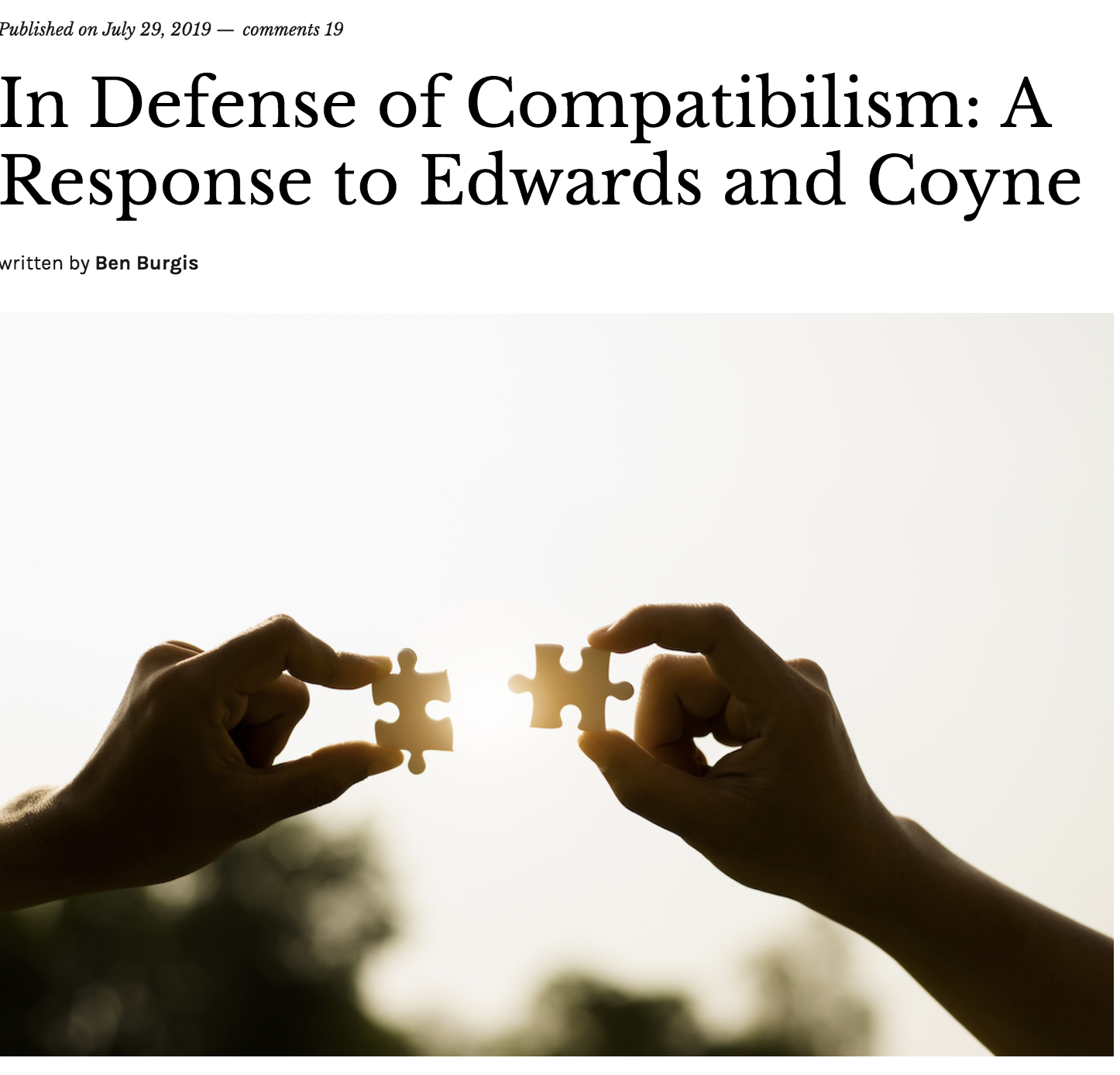 Burgis is arguing for compatibilism: the view that even if determinism is true (conceived of as “our brains obeying the laws of physics, both deterministic and indeterministic), we still bear moral responsibility for our acts. Burgis does agree that at any time we could not have done other than what we did, but insists (with me) that we still should be punished for bad things we do—at least those bad things for which we’re morally responsible. And the idea of moral responsibility, which flows from Burgis’s own definition of free will, is where we differ.

Coyne and Edwards both seem to think that the kind of “free will” we’d need to be held morally responsible for our actions is “contra-causal free will.” In other words, if we’re truly free, then our decisions can override a physical chain of cause and effect. Hume didn’t think we have this kind of freedom. In Chapter Eight of his Enquiry Concerning Human Understanding (“Of Liberty and Necessity”), he argued that, even when we don’t know everything about what led Person P to decide to perform Action A instead of Action B, we shouldn’t jump from that premise to the conclusion that there isn’t a coherent cause-and-effect explanation. Hume compared human psychology to clockwork. When a clock stops working, a peasant might only be able to report that “sometimes they stop working,” whereas a trained clockmaker would be able to find the tiny grain of sand that got caught in the gears. Nevertheless, Hume thought, as long as P picked A because he preferred A rather than because, for example, an assassin threatened to shoot him if he picked B, P chose A of his own free will. In other words, Hume thought that the freedom we need to be responsible for our actions is freedom from coercion.

This was an early version of compatibilism, and it’s vulnerable to some obvious objections. What about a kleptomaniac who steals a bauble to satisfy his compulsion, or a heroin addict feeding an addiction? More fancifully, what if a mad scientist were to implant a chip in P’s brain that caused him to have an overwhelming desire to do A? In each of these scenarios, coercion isn’t present, but P doesn’t seem to be in control of his actions in a way that makes him responsible for them—or, at the very least, he seems to have diminished control and hence diminished responsibility.

Many post-Hume compatibilists would say that in order to be responsible, P must be free not just from coercion but from other factors such as addiction, compulsion, and manipulation by brain implant. Nevertheless, they do not claim that P must be placed entirely beyond the influence of genetic and environmental factors to be responsible.

Never mind that contra-causal (or “libertarian”) free will is what most people think of as free will, and is certainly the view of free will held by many religions as well as much legal thought, for finding salvation or being held responsible for a crime depends on the contra-causal notion that you could have done otherwise.”

But why does being free from compulsion make you morally responsible? Because, according to Burgis, it means that the decision you make (although you couldn’t have done otherwise) was your decision (my emphasis below):

If I find a precious stone on a beach that no one has laid claim to, it’s fine for me to take possession of it. If I find the same kind of stone in a friend’s pocket, it would be wrong of me to take it without asking. In both cases, the stone comes from outside of me. I didn’t make it. The difference is that in the first case, I’m the only person with a claim to it. Similarly, if the mindless operation of natural laws playing out through a complex combination of genetic and environmental factors results in my weighing the pros and cons of a possible course of action in a certain way and coming to a particular decision, the reasons that motivated me are my reasons. If a mad scientist’s chip in my head brings about the same result, they are not. In both cases, my decision is determined by factors outside of me, but only in the first case do I have a unique “claim” on my reasoning.

To be sure, Burgis says that “there’s room for reasonable people to disagree” about his argument, but his argument, which is not new, still seems weak, and for several reasons.

1.) You are always acting under compulsion, whether someone holds a gun to your head, you’re mentally ill, or you’re acting according to what your brain has made you do. As Sam Harris notes, your deciding to drink a glass of milk was just as compelled as your doing something bad under external force. You don’t feel compelled when you do something like walk one way to work rather than another, but you are, because you’re simply following the logic of your brain circuitry and the “decision” it’s spit out.

For example, suppose you decide to forego your vacation so you can save money to send your kids to college. You don’t want to forego your vacation, but you want to send your kids to college, and if you don’t you’ll be ostracized by them and by society. If you give up your vacation in that way, are you under compulsion or not? I’d say you are—just as if someone held a gun to your head. For the workings of your genes and environment made it inevitable that you’d do what you did, even if you didn’t really want to. Many similar examples are conceivable. The point is that if determinism is true, every action we take is an action we were compelled to take.

2.) This does not mean that external circumstances surrounding an action should not be taken into consideration. If you commit a robbery because you’ll be killed if you don’t, then yes, you’re responsible for doing the robbery, but you would be punished, if at all, very differently from someone who commits a robbery without that form of compulsion. For if you do it without a gun to your head, you’re more likely to do it again and need to be punished differently for deterrence of others, for reformation (you need a different kind of treatment in these two circumstances), and the different likelihood that society needs to be protected from you.

4.) The concept of “moral responsibility” is injurious because it underlies a vindictive and retributive view of punishment. Yes, we need to punish people who do bad things, but we can do that by a). holding them responsible for what they did (not morally responsible), and b). realizing that they had no choice about what they did, and then c). meting out punishment based on the circumstances under which they did the crime, how much punishment will constitute a deterrent, what kind of reformation, if any, the malefactor needs, and considering how much society needs to be protected from the malefactor.

These are the reasons that Burgis’s argument doesn’t move me. His view that you are morally responsible, and have a form of free will, so long as what you do is not done “under compulsion” and is done “according to your own reasons”, is neither consonant with what most people think of as free will, nor adds anything to further the points I’ve already made about responsibility and punishment.  I’m not going to respond to Burgis in Quillette, for I’ve just done so.

Social progress in this area depends not on philosophers confecting one or another view of compatibilist free will: Ceiling Cat knows they’ve already devised dozens of conflicting definitions of “free will”, and has that solved the problem? No, of course not.  Real practical progress, which seems not to concern compatibilists, depends us accepting that there is no such thing as contracausal free will, and that every act we perform is an act that we were compelled to do by our genes and environment. When we accept this kind of determinism, then we can set about implementing the kind of judicial reform that we so badly need.

For those of you who say that “compatibilism can also motivate judicial reform,” my response is that compatibilists seem more interested in making semantic arguments than in fixing our badly broken penal system. The reason why determinists are more concerned with practical consequences is because we don’t have to make semantic arguments, and thus move directly from accepting behavioral determinism to effecting a humane utilitarian effort to fix the way we deal with crime and punishment.

128 thoughts on “Another philosopher in Quillette goes after my determinism, and proposes a compatibilist definition of “free will””