I have to admit that when I first saw Marianne Williamson in the Democratic debates my jaw dropped. How did this woomeister, who doesn’t hold elective office and never did, manage to get on stage with credible candidates? I did know about her history of anti-vaccination efforts as well as denial of depression and other mental illnesses, as well as her attacks on “Big Pharma,” but I didn’t comport that with her being on the Big Stage with real candidates. And yet some people like her! One of them is the ever-cringeworthy David Brooks, who wrote this editorial in today’s New York Times (click on screenshot). The title alone is astounding!

How does she know how to beat Trump? With a moral uprising! By defeating the dark psychic force of collectivized hatred! Well, Ms. Williamson (and Mr. Brooks), that’s easier said than done. Where would you propose that we begin?

It is no accident that the Democratic candidate with the best grasp of this election is the one running a spiritual crusade, not an economic redistribution effort. Many of her ideas are wackadoodle, but Marianne Williamson is right about this: “This is part of the dark underbelly of American society: the racism, the bigotry and the entire conversation that we’re having here tonight. If you think any of this wonkiness is going to deal with this dark psychic force of the collectivized hatred that this president is bringing up in this country, then I’m afraid that the Democrats are going to see some very dark days.”

And she is right about this: “We’ve never dealt with a figure like this in American history before. This man, our president, is not just a politician; he’s a phenomenon. And an insider political game will not be able to defeat it. … The only thing that will defeat him is if we have a phenomenon of equal force, and that phenomenon is a moral uprising of the American people.”

A moral uprising of the American people might also include criticizing of those like Williamson whose anti-vaxer views would lead to the death of children.  And this is what the no-punch-pulling Orac (a surgeon) does in this new article at Respectful Insolence (click on screenshot):

In case you’re wondering about Orac’s title, first, he appears to have gotten her name wrong (I’ve made a comment on his site to that effect), though in the rest of the article he gets it right. More important, part of his article is a criticism of a somewhat exculpatory article about Williamson by science writer Faye Flam at Bloomberg.com (click on screenshot):

Faye is a friend of mine, so this hurts doubly, but I think Orac rightly rakes her over the coals for casting Williamson as a misunderstood “science skeptic” rather as a science denialist. Here’s how Faye gives Williamson a pass:

The accusation of being “anti-science” has become a popular and effective way to discredit people, at least in certain circles. Self-help guru turned presidential candidate Marianne Williamson is learning that after her debate performances.

People often end up accused of being “anti-science” when they question scientific dogma, but questioning dogma is what science is all about. Donald Trump could be more accurately labelled as anti-science for the blatant cutting of funds for important scientific studies – though even he may not be opposed to the scientific enterprise so much as he is trying to protect his friends in industry at the expense of science and people exposed to pollution.

A particularly scathing anti-Williamson critique appeared in the Daily Beast, though the author couldn’t seem to find much fault with anything said in this week’s debate, instead digging up past statements. Indeed, she has dealt with some new-age ideas that are unscientific or even antithetical to science, but not more so than much organized religion is.

Williamson seems likely to disappear from the national conversation soon, and critics are right to go after her lack of policy experience. Criticizing her, or any other candidate, on the basis of ideas and experience makes perfect sense. But trying to discredit skeptics with the label of “anti-science” is not very scientific.

Well, the response to this, especially if you know Williamson’s history as well as her weaving-and-bobbing views now that she’s been called out for her anti-vaxerism and wonky views on mental illness, is this:

Here’s the thing about science (and being “antiscience”). There’s a hierarchy, gradations, if you will, of how unscientific or antiscientific your beliefs are. Believing something for which there is no scientific evidence and, in fact, there is plenty of scientific evidence that refutes that belief is on the extreme end, as is believing such things based on conspiratorial thinking. That’s what Williamson has a long history of doing with respect to vaccines. Remember what she has said on more than one occasion?

And here’s one of MW’s tweets (and a response):

Jonas Salk was a great scientist. The polio vaccine did and does save lives. The current controversy about vaccines is not about their inherent value. It’s about the rise in chronic illnesses (from 12% to 54%) among American children since the “Vaccine Protection Law” in 1986.

Orac also dismantles Wiliamson’s claim that chronic illnesses in children have risen to 54%, which is simply a lie. When pressed on this, or on her views that mental illness is just reified “sadness”, she tends to revert to her attacks on “Big Pharma”. Now Orac isn’t a huge fan of the pharmaceutical industry, but for Williamson it’s a displacement activity, designed to divert attention from her profoundly antiscientific views when she’s called out for lying: 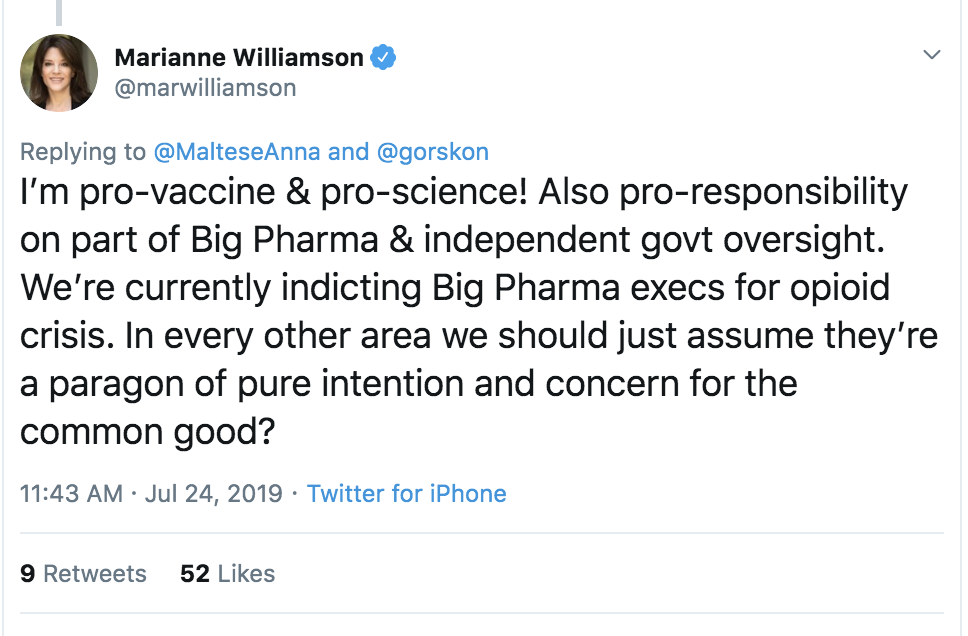 Yes, it must be conceded that there is a legitimate debate to be had over the treatment of mental health and the issue of regulatory capture in the regulation of pharmaceutical companies and their products, but Williamson’s dismissal of so much depression as “medicalizing normal grief” is a vast oversimplification and exaggeration. Of course, when Melber gets around to the issue of “skepticism” on vaccinations (a horrible horrible, horrible choice of a word for this) and tries to press her on it, we see her lay down this “I’m not antivaccine” antivaccine patter:

I think it’s an overstatement to say that I cast skepticism on vaccination. [Orac note: Actually, it’s an understatement.] On the issue of vaccinations I’m pro-vaccination, I’m pro-medicine, I’m pro-science. On all of these issues, what I’m bringing up that I think is very legitimate and should not be derided and should not be marginalized, particularly in a free society, is questions about the role of predatory Big Pharma.

Orac has a lot to say, but even if you just skim his piece and just listen to Williamson’s flaky lucubrations, you’ll wonder why anyone takes her seriously. Is it because Americans don’t know how settled the question of vaccination safety and efficacy really is? I don’t know.

Here’s one more bit from Orac’s piece, but you should watch this video of her with Anderson Cooper first (this was posted yesterday):

Orac’s take on this:

In this segment, Anderson Cooper focused primarily on Williamson’s past statements about antidepressants and psychiatric drugs. Cooper pressed her on her past statements about antidepressants “numbing” people, pointing out quite reasonably that depression itself numbs people. In responses, Williamson goes full woo, denying that she’d ever said what she’s been documented saying and then going on:

What I’ve talked about is a normal spectrum of human despair, normal human despair, which traditionally was seen as the purview of spirituality and religion, that which gave people comfort. gave people hope and inspiration in their time of pain. And with the advent of modern psychotherapy, a lot of the baton passed from religion and spirituality to modern psychotherapy, which was an interesting transition. Then, over the last few years, very very quickly, the baton was passed again to psychopharmacology, and so a nuanced conversation was lost regarding the nature of human despair.

Holy hell. Marianne Williamson’s entire objection to modern psychopharmacology for depression is that it has pushed aside religion and spirituality as the primary means of dealing with “human despair.” Given that she’s a New Age grifter, one shouldn’t be surprised. She doesn’t like a disease-based model of clinical depression because it cuts into her grift. She even goes on to suggest that the treatment of depression is seeking to keep us from feeling normal sadness after, for instance, the death of a loved one, which is a complete mischaracterization of modern psychotherapy.

If that isn’t antiscience, I don’t know what is.

Williamson, of course, got her start by coddling religion, and has simply leveraged that into her non-goddy but still wooey spirituality.

In this case, I think that Faye’s piece is off the mark, for it does conflate healthy skepticism with bald-faced denialism. There’s a huge difference, and Faye’s conflation of these damages the public understanding of science.

And nobody should view Williamson as a viable Presidential candidate, much less a thoughtful human being.