UPDATE: In today’s New York Times, David Leonhardt agrees with Mayer’s conclusions, but also links to a number of journalists who have diverging opinions about Franken (click on screenshot below). Several, for example, think that Franken should have resigned without going through an Ethics Committee procedure. Read his piece, and the links, and decide for yourself.

The other day I highlighted a new New Yorker article by staff writer Jane Mayer about the accusations that Al Franken had sexually harassed LeAnn Tweeden and 7 other women. As you know, those accusations ended Franken’s stint as a U.S. Senator; he was forced out by Senate Democrats without an investigation, apparently because Democrats needed to look credible on the issue of sexual misconduct since they were accusing Republicans (like Roy Moore) of it.

Now we have an NPR interview in which Terry Gross interviews Mayer for 42 minutes, as well as playing clips of interviews and statements by both Franken and Tweeden (these interviews, which don’t appear in the New Yorker piece, are the most interesting, revealing, and exculpatory—to Franken—part of the NPR piece). The interview with Franken, which took place several years before Tweeden’s accusations, makes it pretty clear that he was not sexually harassing her in the famous picture shown below, but re-enacting a skit he’d performed on a USO tour many times. Mayer highlights the weakness (indeed, outright falsity) of Tweeden’s accusations, and how readily the press bought them without doing any checking or exercising due diligence.

Here’s the picture that ended Franken’s career as a politician. He’s sorry he behaved this way, noting that a sleeping person can’t give consent, but the pose is part of the skit that Franken had played in many times. 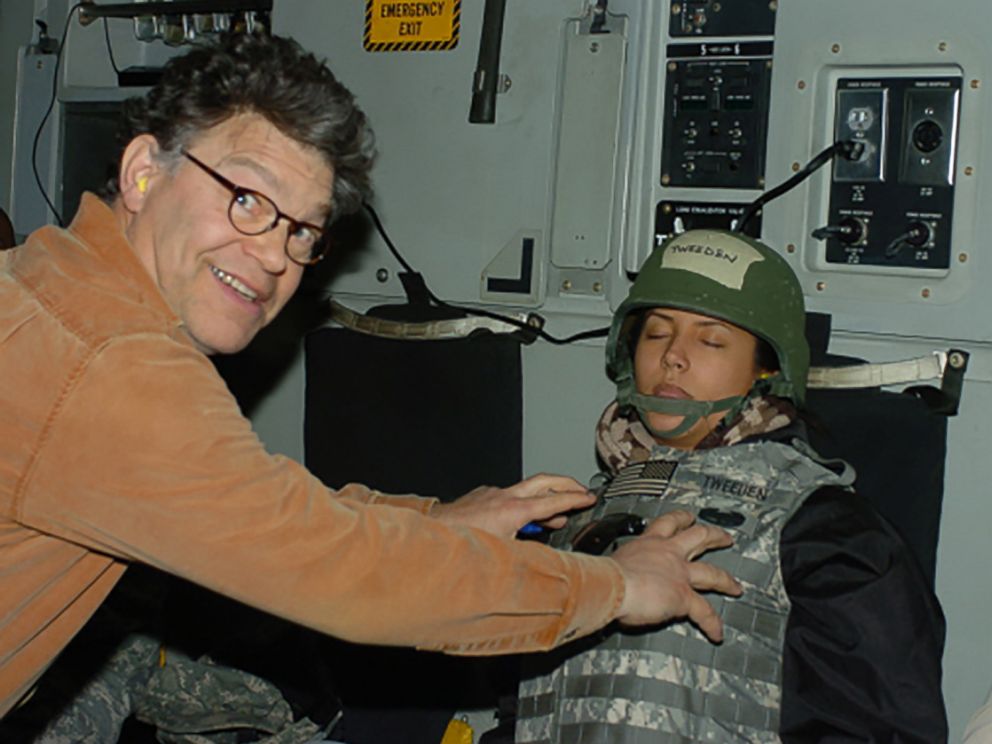 But what about the seven other women who accused Franken of sexual harassement? After all, one person might be wrong, or dissimulating, but seven?

Well, Mayer addressses them all more clearly than she did in her New Yorker piece. Two of them accused Franken of trying to kiss them on the mouth without permission, four accused him of touching them in ways that made them uncomfortable when they were taking a picture with Franken, and one person said that at a fundraiser Franken touched her inappropriately. Each of these instances lasted 3-5 seconds, and all were uncorroborated.

Following up on these accusations, Mayer concludes that Franken was a slob, but someone who was always posing for pictures, and was a hugger and lip-kisser of the type we see in the entertainment world. It seems likely that Franken was simply oblivious to how his behavior was perceived, but it’s also clear that he wasn’t guilty of sexual harassment, and that his expulsion from the Senate without an Ethics Committee investigation was unfair.

Click on the screenshot to hear the interview (there’s also a transcript, but it omits the interviews); when you get to the site, click the arrow at the upper-left of the screen:

At the end Gross asks Mayer the question that’s on everyone’s mind:

GROSS: So Jane, you’ve reported so many sexual harassment and sexual assault stories, dating back to the Clarence Thomas hearings. What’s the moral of the story regarding the Al Franken case? Where does that fit in in the #MeToo movement in your judgment?

MAYER: I talked to a number of incredibly smart feminists about how they saw it, and they’re quoted in this story trying to evaluate it, too. And I end the story with a quote from Debra Katz, who was the lawyer for Christine Blasey Ford, the woman who accused Justice Kavanaugh of having sexually misbehaved towards her many years ago.

And so Debbie Katz, in this story, says she feels it’s a kind of a cautionary tale, that the #MeToo movement – which she is a tremendous supporter of, as am I – needs to make sure that there is some kind of due process. You need to make sure that there is proportionality in terms of, you know, being able to distinguish different gradations of bad behavior. Not everybody is Harvey Weinstein, but there may be other kinds of misconduct that also need to be addressed, but in different ways. And nobody is saying you need to put up with sexual misconduct, but there are just different levels of it.

And then, finally, you know, I think what she’s saying is that if you confuse less serious charges with serious ones, you feed a backlash against the whole movement that could hurt the movement. And there are number of women who are really strong feminists who worry about that in this story.

What was lacking here was due process, and that rush to judgment was what did Franken in. I for one think that the Democrats should have gone through with an Ethics Committee investigation rather than railroad the man out of office.