There’s little doubt that had Al Franken not left the Senate because he was accused of sexual harassment, he would now be one of the top-polling Democratic candidates for President. In fact, I might have favored him over any of the other candidates. But there’s no chance of that: he’s gone and the accusations against him have rendered him political Kryptonite.

But article below by New Yorker staff writer Jane Mayer, which just appeared in the magazine, makes a good case that Franken was not guilty of harassment; if anything, it suggests he was a “huggy” type devoted to his wife and family, and was blindsided by the accusations. And now he regrets resigning. Before your hackles go up because you think he was a predator, please read the article.  If you buy its thesis, you’ll also no longer see Kirsten Gillibrand, who led the call for Franken to resign, as a viable candidate for President, either.

GBJames called my attention to this piece (I no longer subscribe to the New Yorker, but this is free online; click on the screenshot). He also said this, which I quote with permission:

I’m pretty angry about how this went down and I can understand why Senator Gillibrand is having trouble getting much support. 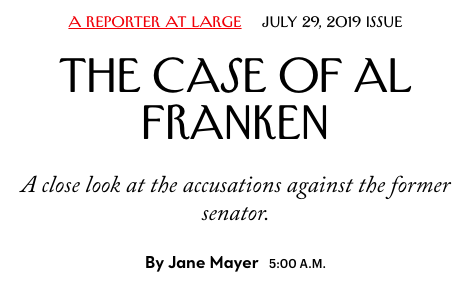 Some of the points include Franken’s regrets that he resigned under pressure rather than have a Senate Ethics Committee investigation of the accusations:

When I asked him if he truly regretted his decision to resign, he said, “Oh, yeah. Absolutely.” He wishes that he had appeared before a Senate Ethics Committee hearing, as he had requested, allowing him to marshal facts that countered the narrative aired in the press. It is extremely rare for a senator to resign under pressure. No senator has been expelled since the Civil War, and in modern times only three have resigned under the threat of expulsion: Harrison Williams, in 1982, Bob Packwood, in 1995, and John Ensign, in 2011. Williams resigned after he was convicted of bribery and conspiracy; Packwood faced numerous sexual-assault accusations; Ensign was accused of making illegal payoffs to hide an affair.

A remarkable number of Franken’s Senate colleagues have regrets about their own roles in his fall. Seven current and former U.S. senators who demanded Franken’s resignation in 2017 told me that they’d been wrong to do so. Such admissions are unusual in an institution whose members rarely concede mistakes. Patrick Leahy, the veteran Democrat from Vermont, said that his decision to seek Franken’s resignation without first getting all the facts was “one of the biggest mistakes I’ve made” in forty-five years in the Senate. Heidi Heitkamp, the former senator from North Dakota, told me, “If there’s one decision I’ve made that I would take back, it’s the decision to call for his resignation. It was made in the heat of the moment, without concern for exactly what this was.”

Other points that Mayer makes in her article (note: I am not saying she proves these contentions, but I will say that she makes a strong case that Franken was unfairly demonized).

Gillibrand then went on Facebook and posted her demand that Franken resign: “Enough is enough. The women who have come forward are brave and I believe them. While it’s true that his behavior is not the same as the criminal conduct alleged against Roy Moore, or Harvey Weinstein, or President Trump, it is still unquestionably wrong, and should not be tolerated.”

Minutes later, at a previously scheduled press conference, Gillibrand added insult to injury: she reiterated her call for Franken to resign while also trumpeting her sponsorship of a new bill that banned mandatory arbitration of sexual-harassment claims. She didn’t mention that Franken had originated the legislation—and had given it to Gillibrand to sponsor, out of concern that it might be imperilled by his scandal.

Not long ago, I asked the woman if she thought that Franken had been making a sexual advance or a clumsy thank-you gesture.

“Is there a difference?” she replied. “If someone tries to do something to you unwanted?” From her standpoint, because she was at work—a professional woman deserving respect—his intentions didn’t matter.

Franken has maintained that the woman’s story was the allegation “that killed me.” I asked her if his behavior was bad enough to end his Senate career.

“I didn’t end his Senate career—he did,” she said.

Franken was stricken when I related her comments to him. “Look,” he said. “This has really affected my family. I loved being in the Senate. I loved my staff—we had fun and we got good things done, big and small, and they all meant something to me.” He started to cry. “For her to say that, it’s just so callous. It’s just so wrong.” Rubbing his eyes beneath his glasses, he said, “I ended my career by saying ‘Thanks’ to her—that’s what she’s saying.”

Was Franken a sexual predator? The article suggests that he was not,—not in the least. Was he guilty of trying to kiss women in a way that was misinterpreted? Almost certainly. Should he have resigned from the Senate rather than face an ethics investigation? I don’t think so. But the #MeToo climate was so strong at the time that he was doomed from the moment that The Picture appeared. And although some women, like Gillibrand, have no regrets about forcing Franken from the Senate, others are troubled. The article ends like this.

The lawyer Debra Katz, who has represented Christine Blasey Ford and other sexual-harassment victims, remains troubled by Franken’s case. She contends, “The allegations levelled against Senator Franken did not warrant his forced expulsion from the Senate, particularly given the context in which most of the behavior occurred, which was in his capacity as a comedian.” She adds, “All offensive behavior should be addressed, but not all offensive behavior warrants the most severe sanction.” Katz sees Franken as a cautionary tale for the #MeToo movement. “To treat all allegations the same is not only inappropriate,” she warns. “It feeds into a backlash narrative that men are vulnerable to even frivolous allegations by women.”

I, at least, felt sorry for Franken, for he feels blindsided and unfairly treated, and even became clinically depressed. He’s dropped out of sight and no longer can fulfill his mission to drop the comedy and be a good Senator. If you think he’s guilty, you’ll feel no pity for him and will say he’s gotten his just deserts. But read the article before you decide.

71 thoughts on “Should Al Franken have left the Senate?”