I used to think that Inside Higher Ed (IHE) was a pretty objective forum for reporting news from academia. But now, it seems, they’re going the way of BuzzFeed, publishing what is essentially a hit piece on Steve Pinker that, starting with his trivial assistance to Alan Dershowitz in the first prosecution of Jeffrey Epstein for sex crimes (Pinker interpreted the language of a statute, for chrissake), goes on to dredge up all the other accusations of Pinker from the last several years: he’s white, male, old, a sexist, and his scholarship is deficient. In other words, it goes beyond the ambit of the news to once again thrust a sword into Pinker. You can read the piece by clicking on the screenshot below.  Yes, I know where the title of the piece comes from, but it makes absolutely no sense to me in this context.

Note the prominent use of the incriminating picture, whose circumstances Pinker has explained. 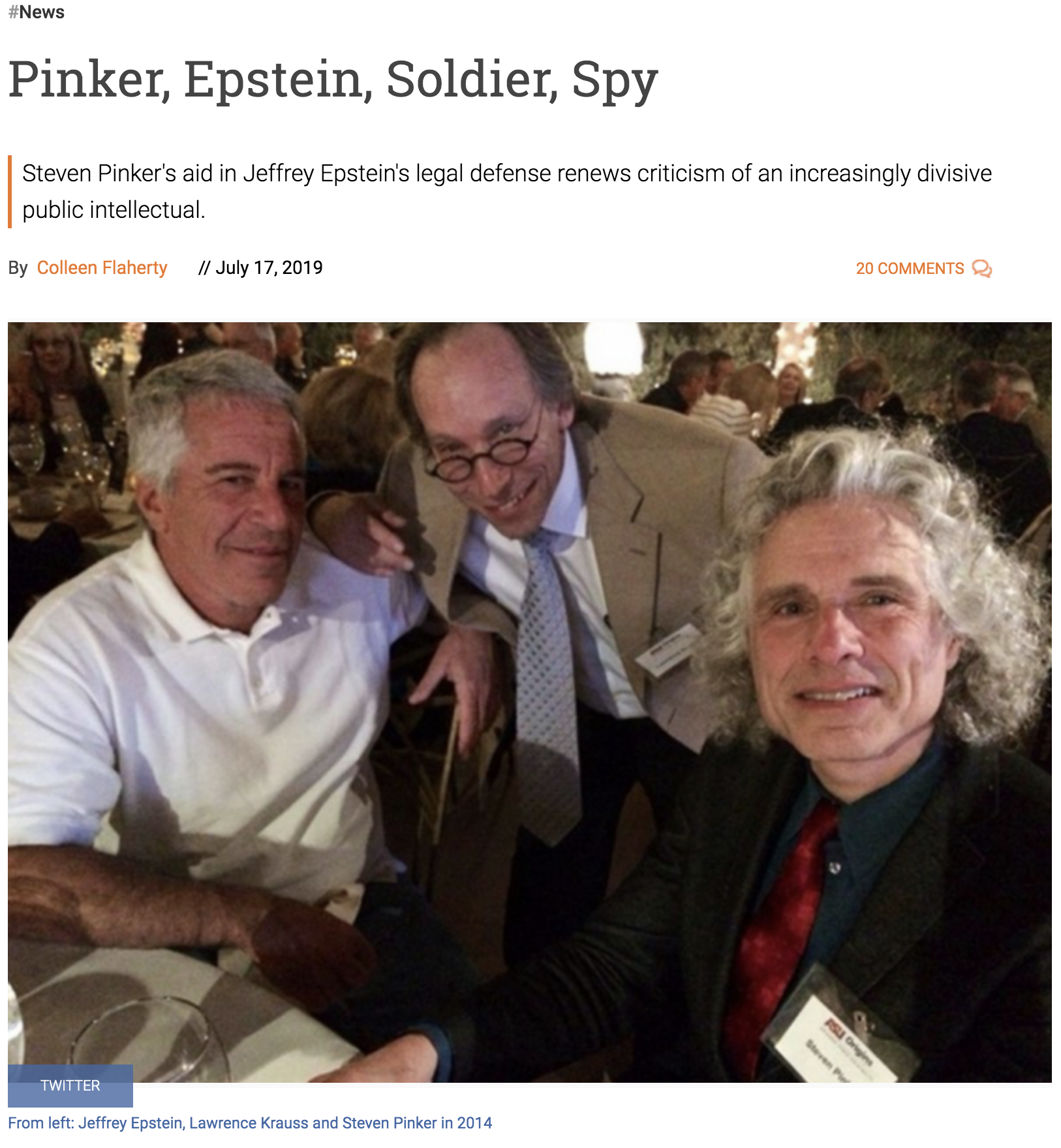 What bothers me about the piece is that everybody who comments on Pinker is a critic, save one tweet from Claire Lehmann defending him and a quote from my defense of Pinker when Steve explained his dealings with Epstein.  What are you supposed to think when you read the following quotes? (I’ve added links to some of those quoted to help identify them.)

That convicted sex offender Jeffrey Epstein had help in avoiding federal or state prison is unsurprising: money and power often buy what they shouldn’t. But the recent revelation that Epstein found aid from star psychologist Steven Pinker in the form of a 2007 legal document surprised both Pinker’s fans and critics.

. . .As Pinker wrote in 2018’s Enlightenment Now: The Case for Reason, Science, Humanism and Progress, “People seem to bitch, moan, whine, carp and kvetch as much as ever,” despite reams of data on how humans’ quality of life continues to improve.

Pinker’s detractors, meanwhile, take the revelation that he knew Epstein and contributed to his legal defense as proof that the professor is a fraud, has lost his way, or both. Just as critics have accused Pinker of glossing over inequality and the continued suffering of individuals in praising progress, they’ve asked how he could have patinated a predator’s defense.

“At a certain point, if you’re playing Dr. Pangloss to people who administer a monstrous social order, then at some point you’re going to rub shoulders with and do favors for actual monsters,” said Patrick Blanchfield, a scholar of politics and violence and an affiliate faculty member at the Brooklyn Institute for Social Research.

As I said before, I must be even guiltier than Steve because I was on the defense team of O.J. Simpson, who was accused of a horrible double murder and got off.  And look at Blanchfield’s quote! Rubbing shoulders and doing favor for actual monsters? I guess every criminal defense lawyer and expert witness is “doing favors for monsters.” Blanchfield isn’t even savvy enough to know that a vigorous defense is the only guarantee we have that the law doesn’t start railroading everybody. There are standards of guilt, and they include proof beyond a reasonable doubt.

And here’s Pinker’s help with Epstein (and being at meetings with him) used to confirm the supposedly shoddy nature of Steve’s scholarship:

Joel Christensen, chair of classical studies at Brandeis University, said that “however forced, or tepid or merely transactive” Pinker’s interaction with Epstein was, it “confirms for many what has been clear for years.” Pinker, he said, “is a reactionary who is moving from the center to the right because he refuses to engage critically with new voices or to entertain honestly the criticisms his work has produced.”

I guess my working for O. J. Simpson’s team confirms that I too am a reactionary. What does Pinker’s assistance for Dershowitz have to do with his political affiliation or openness to criticism? What are people like Christensen thinking?  I can only guess that they’re using this trivial assistance by Pinker to flaunt their own virtue.

And what was Pinker’s crime? The article details it:

But it’s the favor that Pinker did for Epstein that’s caused him the most trouble of late: in 2007, Epstein’s attorneys — including Harvard legal scholar Alan Dershowitz — submitted a letter to federal prosecutors arguing that their client hadn’t violated a law against using the internet to lure minors across state lines for sexual abuse.

“To confirm our view of the ‘plain meaning’ of the words, we asked” Pinker, “a noted linguist, to analyze the statute to determine the natural and linguistically logical reading or readings of the section,” the letter said. “We asked whether the statute contemplates necessarily that the means of communication must be the vehicle through which the persuading or enticing directly occurs. According to Dr. Pinker, that is the sole rational reading.”

It’s impossible to know how much that analysis helped Epstein land his deal, if at all. But it clearly didn’t hurt him.

First of all, the favor was done for Dershowitz, not Epstein, and that’s important. Steve was acting as an expert witness in a criminal-defense case, as I did many times when trying to ensure that the government didn’t misuse DNA evidence by misinterpreting the statistics to the detriment of the accused. Apparently Flaherty herself—the author—doesn’t understand that helping out with a criminal defense is not a crime: it’s what needs to be done to ensure that the government always has to prove its case beyond a reasonable doubt. Author Flaherty doesn’t even mention that!

And yes, rich people can buy better lawyers and better defenses than can poor people. That’s a big inequity in our system, and desperately needs fixing, but it doesn’t hurt the justice system—it helps it. The more robust the defense, the more thoroughly the prosecution must document its case. For Epstein now, it looks as if no lawyer, however good, will be able to get him off; and that’s the way it should be. To my mind, the evidence against him is overwhelming, and I don’t see much “reasonable doubt.”

The article then describes a bit of contretemps between Pinker and feminists in which he’s hung out to dry because he says that rape has at least something to do with sex. (He’s right: it’s about a combination of power and sex, an assertion that I agree with and that caused me to fall out with Susan Brownmiller when we were collaborating.)

Flaherty then quotes from my posting of Steve’s defense, but she can’t resist immediately opposing what Pinker and I said with the words of another critic. In this piece, the critics always get the last word.

Coyne wrote, “There you have it. If people are going to tar Pinker by flaunting his association with Epstein, then Pinker deserves a reply. This is his reply, and any further discussion should take it into account.”

Adia Benton, an assistant professor of anthropology at Northwestern University, said that beyond Pinker and Dershowitz, “I think there’s a tendency for men to overlook the foibles of their acquaintances and colleagues. The shunning of assholes and creeps is just not done. Especially when it comes to sexual misconduct and misogyny.”

Overlooking the foibles of their acquaintances and colleagues? Not shunning assholes and creeps? Did Dr. Benton or Ms. Flaherty note that I called out Lawrence Krauss for sexual predation, publicly disassociating myself from him? So did several other men, including, I believe, physicist Sean Carroll and the board of the Center for Inquiry. Dan Dennett and Pinker have both said they found Epstein’s crimes reprehensible. None of that is mentioned, of course: Benton gets the last word here.

My view of articles in general is that the last paragraph always gives a clue to the slant of the piece and the opinion of the writer. Here’s Flaherty’s:

Comparing Pinker to University of Toronto psychologist and quasi-guru Jordan Peterson, Christensen said Pinker “courts public attention and controversy after years of creating and publicizing work that is interdisciplinary and outward focused.” Over the past few years especially, he said, Pinker has joined “a cadre of older, mostly white male academics who espouse a purist view of free speech and debate” that “ignores significant scholarship from women and scholars of color about how free speech and academic freedom as traditionally construed overweight and privilege already privileged voices” — meaning mostly white, older men.

Yes, the ending criticizes free speech as well as trotting out the “old white male” canard to denigrate free speech. Never mind that the head of the ACLU, and author of a very good new book on free speech, is a woman: Nadine Strossen. Never mind that one of the most stirring and eloquent defenses of free speech I’ve heard in recent years was given by Van Jones, a liberal (and black) commentator for CNN (watch it here).  Never mind that minorities gained their rights largely through free speech—demonstrations and orations!

This is a one-sided, disappointing, and virtue flaunting article that serves as yet another hit piece on Pinker. I’m deeply disappointed with Inside Higher Ed, and with Flaherty’s reporting.