I’m rereading Orwell’s novel 1984, and so this new report from Science reminded me of the Party’s attempt to change language into “Newspeak” and, by purging old words, creating a new language with a new ideological slant. (That, of course, derived from Orwell’s earlier but superb essay Politics and the English Language.)

The Science article relates, at some length, how studies by several federal agencies—mainly the U.S. Geological Survey (USGS), but also the Department of Agriculture and the Interior Department—have been deleting references to climate change from press releases. It appears to be a deliberate but unofficial policy of the government. 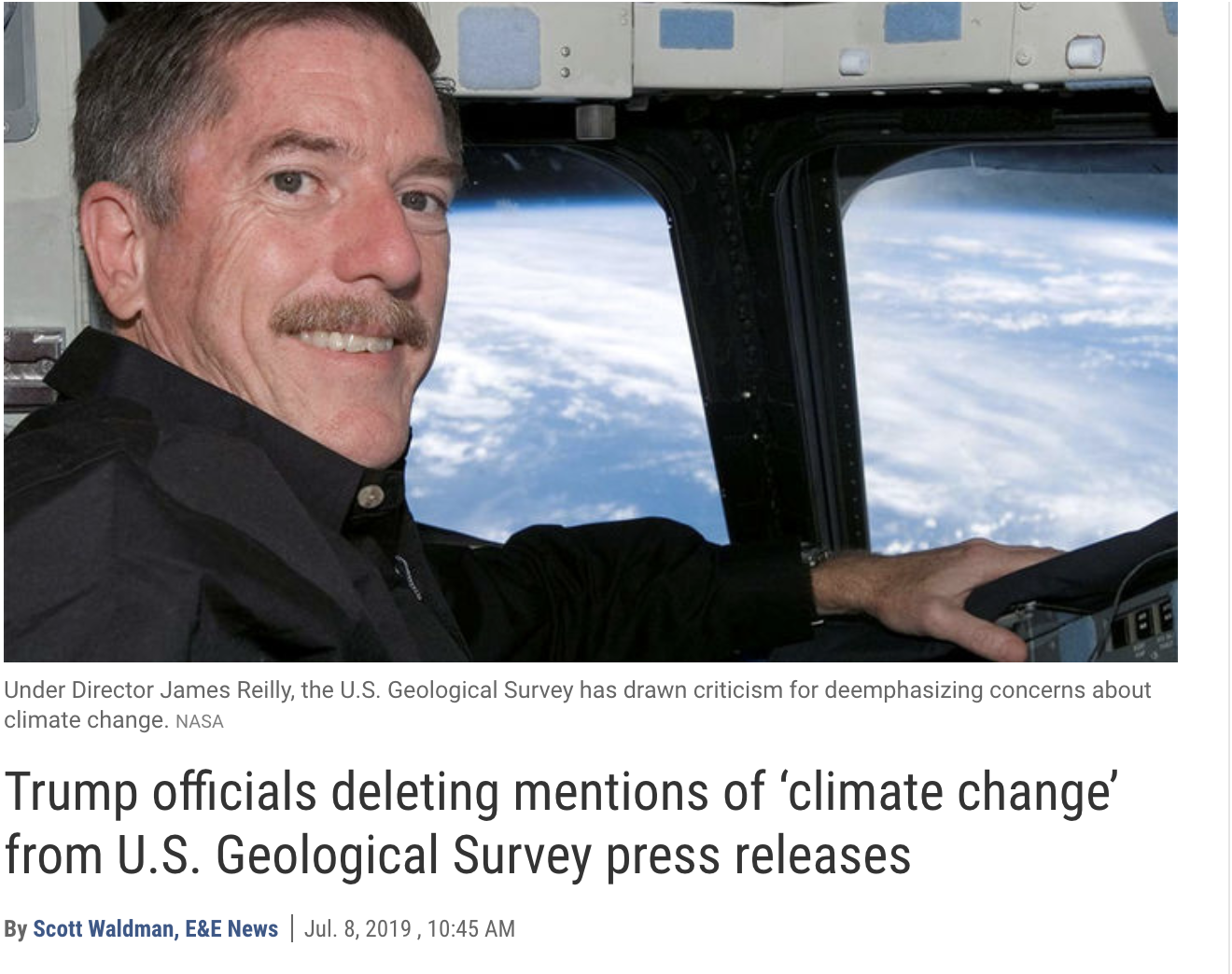 To be sure, there are no accusations that the Trump administration is forbidding the agencies from conducting studies on global warming, or from publishing the results in journals. The accusation is that in the press releases—often the only thing journalists read or care about, since they’re averse to reading papers—expunge mention of global warming as a cause of various damages or potential damages to the environment. This redaction has been going on for some time, but this useful article collects several instances of press-release censorship.

I’ll give just two examples, as quotes from the article:

a.) “A March news release from the U.S. Geological Survey (USGS) touted a new study that could be useful for infrastructure planning along the California coastline. At least that’s how President Donald Trump’s administration conveyed it.

The news release hardly stood out. It focused on the methodology of the study rather than its major findings, which showed that climate change could have a withering effect on California’s economy by inundating real estate over the next few decades.

An earlier draft of the news release, written by researchers, was sanitized by Trump administration officials, who removed references to the dire effects of climate change after delaying its release for several months, according to three federal officials who saw it. The study, published in the journal Scientific Reports, showed that California, the world’s fifth-largest economy, would face more than $100 billion in damages related to climate change and sea-level rise by the end of the century. It found that three to seven times more people and businesses than previously believed would be exposed to severe flooding.

‘We show that for California, USA, the world’s fifth largest economy, over $150 billion of property equating to more than 6% of the state’s GDP and 600,000 people could be impacted by dynamic flooding by 2100,’ the researchers wrote in the study.

The release fits a pattern of downplaying climate research at USGS and in other agencies within the administration. While USGS does not appear to be halting the pursuit of science, it has publicly communicated an incomplete account of the peer-reviewed research or omitted it under President Trump.

‘It’s been made clear to us that we’re not supposed to use climate change in press releases anymore. They will not be authorized,’ one federal researcher said, speaking anonymously for fear of reprisal.”

Note, however, that later in the article, when summarizing the press release, author Waldman does quote the final press release as saying this:

“The authors then translated those hazards into a range of projected economic and social exposure data to show the lives and dollars that could be at risk from climate change in California during the 21st century.”

So it’s not completely kosher to imply that all mentions of climate change were expunged from press releases. The article could have been a bit more honest about this.

And on the incipient demise of polar bears:

b.) “A release in 2017 that publicized a study on how polar bears were expending more energy due to a loss of sea ice did not mention climate change. It noted that a ‘moving treadmill of sea ice”’ in the warming Arctic forced polar bears to hunt for more seals and placed pressure on their population in the Beaufort and Chukchi seas, without stating that climate change is a key driver of sea ice conditions.”

That is even more dishonest.  And we all know why this censorship is happening: economic interests come to bear on the government that impel a Republican administration to downplay the results of anthropogenic climate change. The “moving treadmill of sea ice” is an Orwellian euphemism for “icecaps melting because of climate change.”

All this does, of course, is convince people that if there is a problem, it has nothing to do with greenhouse gases or human energy change. And that reduces the urgency of reducing emissions.  If there is any humanity to look back on our species in the future, they’ll marvel at how much we ignored an exigent problem. But of course nobody may be left to chastise us for our shortsightedness. It all seems unstoppable.