Unless you get up very early this Monday, July 8, 2019, I’ll be back in Chicago when you read this. (I’m writing this in the United Lounge at the Honolulu Airport). It’s National Chocolate with Almonds Day (I remember when you could get a big Hershey Bar with almonds for only 5¢, which dates me as very old). It’s also Body Painting Day as well as National Blueberry Day and  Video Games Day.

Congrats to the US team, which won the FIFA Women’s World Cup in soccer for the fourth time, beating the Netherlands 2-0. The Google Doodle celebrates the victory (below)

Here’s a short video of the highlights:

The score would have been even more lopsided had the Netherlands keeper not made two great saves:

Stuff that happened on July 8 include:

Those who expired on July 8 include:

This is a sad day, because when Templeton died he left all his dosh to foundations with the mission of blurring science and religion: of showing that science could in fact give evidence for the divine.

Meanwhile in Dobrzyn, a feral black cat has been hanging around Andrzej and Malgorzata’s house, and apparently has been seen outside with Hili. They have been leaving out cat food and cream for the animal, who has been coming closer to the house and even just a few feet from Andrzej. (They also put a nest box for the cat on the veranda.) They’ve also given the cat a name: Czarnuszek.

Could this be a substitute for Cyrus as Hili’s BFF? Who knows? But here’s the first dialogue with Hili and Czarnuszek. May there be many more!

Hili: Why is the black cat afraid of me?
A: He can see that you are bigger.
Hili: But I’m not hissing at him. 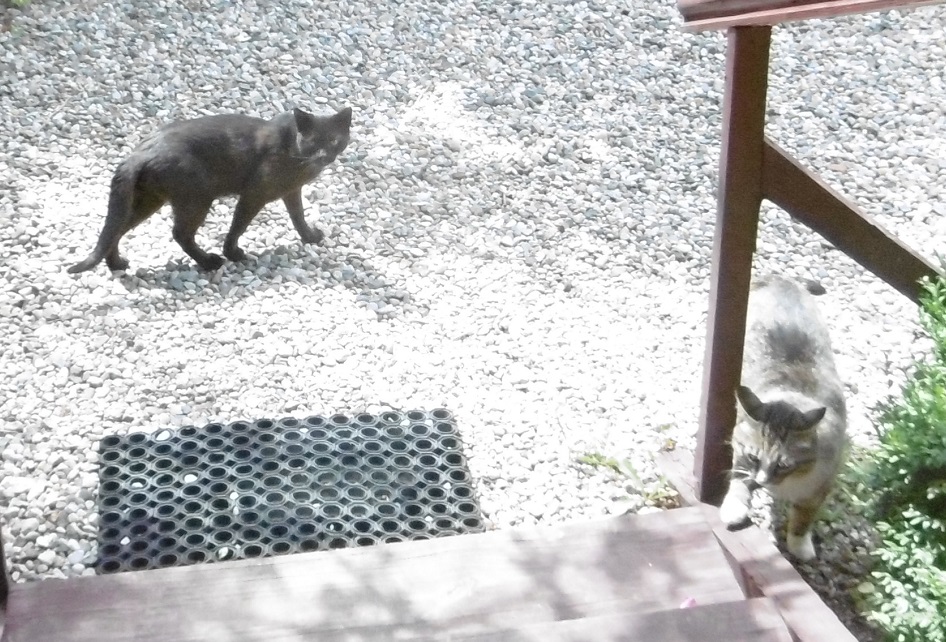 And some tweets. I found this one, and it’s very soothing. Oh to be a capybara in Japan!

Three tweets from Nilou. The first: “Such is life on the steppes.” But the UV urine-train detection is new to me.

Golden eagles can see the ultraviolet spectrum—which enables them to detect the urine trails of small rodents pic.twitter.com/cLCahSAi0B

This fish is also new to me:

Because of its oversized mouth and temperamental behaviour, the fish Neoclinus blanchardi is commonly known as the SARCASTIC FRINGEHEAD. pic.twitter.com/dJYjWxdxLz

And another remarkable display of head stabilization in birds:

A recent video of a hunting kingfisher from @SheppeyWildlife demonstrates how birds are uniquely adapted to stabilize their gaze. https://t.co/jvQjtjrsGB pic.twitter.com/DFlgXsxXir

From Gethyn: tent-licking lions. Would you want to or not want to experience this on safari? I would!

Two tweets from Heather Hastie. This cat really enjoys having its toes massaged:

Not many cats would soak in their own kitty pool:

And three tweets from Matthew. In the first, the Jodrell Bank Observatory, run by Matthew’s University of Manchester, becomes the first “science site” to gain status as a UNESCO World Heritage site. See more information here.

So…. that's it! We did it!@jodrellbank is now a UNESCO World Heritage Site….
Nearly 10 years after @ProfTimOB & I began the process, it was a privilege to hear the gavel come down on the decision. Huge thanks to everyone who helped us along the way. 👏👏👏 pic.twitter.com/OHyOr1qehg

Good question: why are the peas upside down? I don’t think this is an illusion.

Why are the peas upside down.

It's fucking me up. pic.twitter.com/P9Y2N68IOA

YOOOO, this cockatoo is deadass tearing down anti-bird spikes 😂😂😂

he said fuck the police pic.twitter.com/xLQHC2zLDh