(Re the title: perhaps you are old enough to remember this commercial.)

Can anybody appear on The Big Think these days? Apparently so—if you’re willing to make nice to religion.

Reader Kit, who called my attention to the misguided lucubrations of Michio Kaku yesterday, also pointed me to this 8-minute Big Think video by comedian, actor, and writer Peter Holmes, who tells us that he knows what God is—thanks to his having read Joseph Campbell on the nature of myth.

No, God is not an old man with a beard, he’s really a metaphor for a mystery—a kind of truth that is not only ineffable (rendering it, of course, non-refutable), but a “higher level of truth”.

It does not seem beyond the realm of possibility that Holmes was stoned out of his gourd when he made this video (after all, he says he wishes the listeners were stoned and also makes approving noises about Cannabis sativa). The stream of “thought” is disconnected, bizarre, discursive, and fragmented: just the kind of mind-dump you hear from some stoners. Believe me, it’s no Ulysses.

Have a listen (there’s also a transcript at the site): 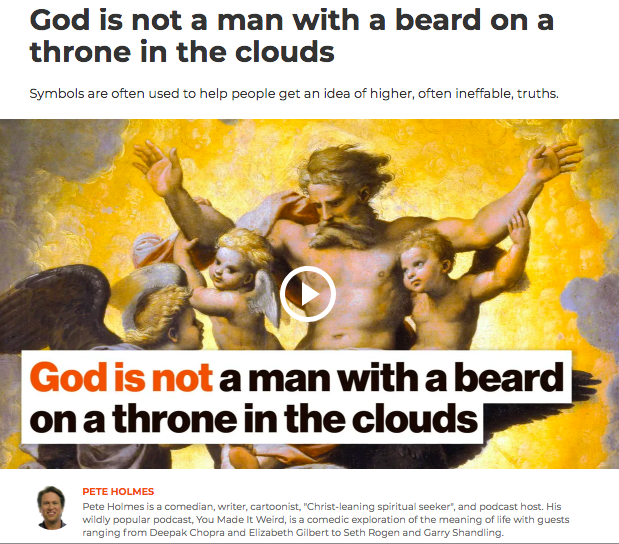 The transcript is one long paragraph, like a stoned monologue. Here’s the end of it (emphases are mine):

. . . And Richard Rohr talks about God being like a verb more than a noun. It’s not a thing that you have and you know that you have. It’s an experience and it’s a way that you change how you go about every single moment of your day, which is really the same moment. We’re just moving through it. [LAUGHS] I hope you’re stoned. I hope you’re stoned while you watch this because there’s only one moment, we’re just moving through it. That’ll kick it up a gear. I hope it’s a sativa. But anyway, he helped me understand that literal truth is the lowest level of truth, and that God– obviously a man with a beard on a throne in the clouds is a metaphor for God. It’s old, the beard is old. OK. Old. Been here a while. Throne is important. Clouds is above it. Seize it. In the old days, if you want to know a town, climb a hill and see the whole town. So it’s just a metaphor. But he does better than that. He says, God itself– a man and a beard, a cloud, all that, that’s a metaphor for God. But he says God itself is a metaphor. And God is a metaphor for what? It’s a mystery. So he’s the thing pointing– or she or it. This is a metaphor for the mystery that we’re all in, regardless of your beliefs. I do not think someone is going to scan your brain when you die for the correct beliefs. Fuck that shit. I believe in aliens. You know what I mean? I give my believe away so willy nilly, how could this precious, unbelievably vibrant, juicy, sexy game come down to, what thoughts did you think repeatedly? I believed this and I didn’t believe that. Scan. OK, you go to heaven and these Hindus go to hell. God, we lost it. But guess what.

Okay, so Holmes tells us that no religion has a monopoly on truth, and they’re all metaphors for something that’s apparently a “higher truth”, which, he says, is infinitely superior to “literal truth”:

Well, if you can figure out what he means by literalism versus emotionality, and what “emotional truth” is, and what the mythical and emotional truths of his love for his wife are, then good luck to you. But when it comes to something Higher and beyond Holme’s spouse, what, exactly, is he talking about? Is it spirituality? Is it awe? Or is it something beyond these feelings—something real. And if it is real, what is it?

I have no idea, nor do I want to smoke weed to figure out what Holmes is saying. Let him sum it up with the bullet points:

It seems from this pabulum that Holmes really does accept the existence of some kind of “divine”—something numinous. It’s not just Richard Dawkins looking up at the stars and feeling awe and wonder. No, there’s something Supreme, and Old, and Presiding Over Us All.

But what, pray tell, is It? We don’t know, and Holmes, perhaps overcome by the fumes of a burning plant, doesn’t let us in on His Secret.

I haven’t scanned the Big Think videos to see if there are any atheistic ones. But I hope that if there are, they aren’t as bizarre and nonsensical as the one above.

47 thoughts on “God is both a metaphor and real: a serious mind dump by a possibly stoned comedian”