Pardon my French if I emit a loud “Oy, gewalt!”  If you click on the video below, you’ll go to a miserable display of accommodationism by by physicist and science popularizer Michio Kaku (there’s also a transcript at the site). It’s sad to see a man spend down his credibility in such a way. 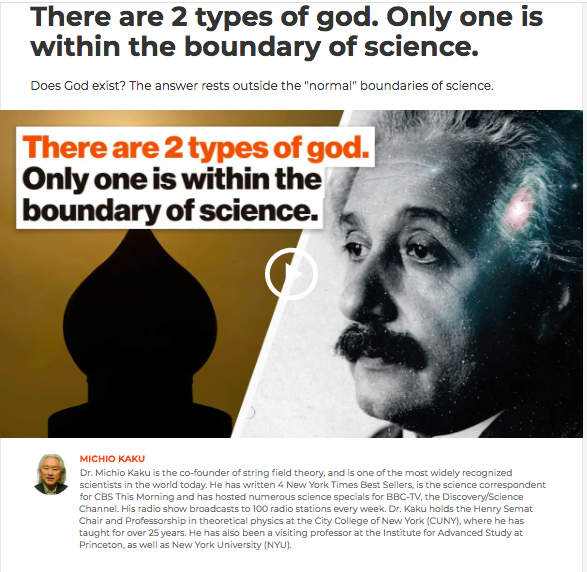 I haven’t listened much to Kaku, so I don’t know how good he is at popularizing science. Nor do I know anything about his substantive contributions to physics. But this Big Think video joins an increasing number of other religion-coddling Big Think pieces, and it is as the kids used to say, “heinous.” First, there’s this:

Well, when you talk about religion, I like to quote from Galileo. Galileo said, the purpose of science is to determine how the heavens go. The purpose of religion is to determine how to go to heaven. So in other words, science is about natural law. It’s about the laws of nature. While religion is about ethics, about how to go to heaven, how to be a good person, how to earn the favor of God. So you see, as long as you keep these two separate, there’s no problem at all. The problem occurs when people from the natural sciences begin to pontificate upon ethics and when religious people begin to pontificate about natural law. That’s where we get into trouble.

This is simply a rehash of Gould’s NOMA (non-overlapping magisteria) hypothesis, and it fails for the same reasons that NOMA failed: most religions aren’t content to completely avoid truth statements (ergo we have creationism among Orthodox Jews, Muslims, and fundamentalist Christians); and religion is not the sole bailiwick of ethics. In fact, religion isn’t even the best bailiwick of ethics, for it corrupts rationality in its attempt to make us do what God wants. So why shouldn’t a scientist be a better judge of ethics than a believer?

But where Kaku really blows it is when he tries to say that there really might be a god, but we just don’t know because adducing evidence for God is simply beyond the ambit of science. Look at this palaver:

Therefore, you ask the question, is the existence of God provable? Well, what is science? Science is based on things that are testable, reproducible, and falsifiable. But you see, the existence of God is not testable. It’s not reproducible. We cannot reproduce God at will. You cannot put an angel inside a box and demand that miracles take place. It doesn’t work that way. That’s why religion is based on faith rather than things that are objectively testable, falsifiable, and reproducible. Now, that doesn’t mean that God doesn’t exist. I don’t know. I don’t know if God exists or not. All I’m saying is that science is limited by looking at what is testable, reproducible, and falsifiable. There are areas where you push the boundaries of that, like the Big Bang.

I suppose that Kaku would say that the existence of Santa Claus, Bigfoot, or leprechauns are not testable propositions, either. But that’s bogus. As Victor Stenger used to say, “The absence of evidence is evidence of absence, if the evidence should have been there in the first place.” There should be evidence for a divine being who wants us to worship him/her/it, just as there should be evidence for the Loch Ness monster and other superstitiions. But it’s not there in any of these cases. Is Kaku, then, also a Bigfood agnostic and a tooth-fairy agnostic? I think not. To Kaku, God is somehow different from these other fictions.

I need hardly note that the existence of the Big Bang is not outside science: we can test its occurrence in various ways: the expansion of the universe, the signature of microwave radiation left over from it, and so on. So yes, you can test the Big Bang, Dr. Kaku.

This seems to be a man who is so muddled, at least in this video, that he can’t even get science right, much less religion. Once again the Big Think is a Big Thunk.