A reader sent me a link to an article from The Australian which, sadly, is behind a paywall (click on screenshot to see). It is the very height of shameless pandering to ethnic groups who accept false stories about their history, and it’s also the nadir of academic truth. (If you want a transcript of the entire piece, judicious inquiry will yield one.) 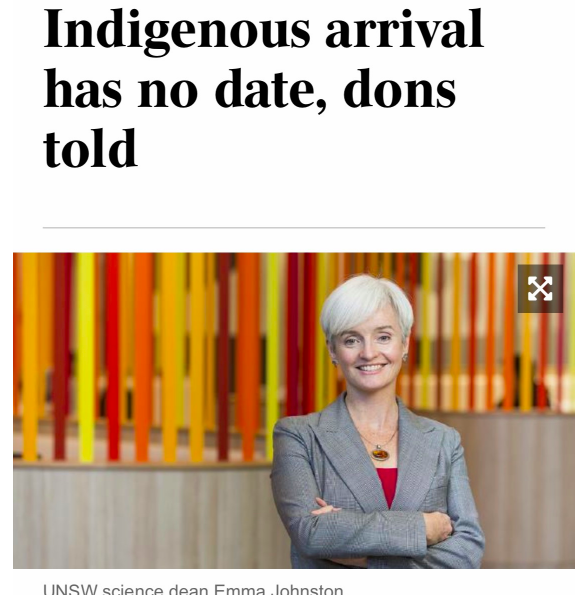 For you, dear readers, I’ll transcribe the relevant parts:

University science lecturers have been warned off making the familiar statement in class that “Aboriginal people have been in Australia for 40,000 years.”

It puts a limit on the occupation of Australia and many indigenous peoples see this as “inappropriate,” according to the University of NSW language advice for staff.

The document suggests that it is “more appropriate” to say that Aborigines have been here since the beginning of the “Dreaming/s” because this “reflects the beliefs of many indigenous Australians that they have always been in Australia from the beginning of time, and came from the land.”

. . . A new set of classroom guidelines, which alert scientists to existing language advice, was circulated in the science faculty this month. One scientist said that most academics got on with their work and did their best to ignore such documents.

Many indigenous Australians see this sort of measuring and quantifying as inappropriate.”

But scientists push back, recognizing that although some aboriginal people hold this false view of their origins, the scientific facts say otherwise:

Last year a UNSW science faculty research centre said the First People “arrived soon after 50,000 years ago, effectively forever, given that modern human populations only moved out of Africa 50,000-55,000 years ago”.

The centre’s blog on its review of the scientific evidence begins: “Many Aboriginal Australians would say with conviction that they have always been here.”

. . . The inclusivity guidelines, which introduce and link to the indigenous language advice, were approved by a working group involving the dean Emma Johnston.

. . . The Weekend Australian asked researchers in this field whether indigenous Australians had warned them against the attempt to unravel the timing and sequencing of arrival on the continent. University of Wollongong archaeologist Richard Fullagar said: “The Aboriginal people I’ve worked with are enormously interested in the scientific evidence” of early indigenous occupation.

He said this research could be sensitive, and said: “Aboriginal people have sometimes told me that they have been here forever.

“Current scientific evidence indicates that the first Aboriginal groups in Australia came from islands to the north and ultimately (like all of us) from modern human dispersals out of Africa with subsequent genetic mixing.

The “advice” of UNSW, a respected Australian University, is reprehensible, for it urges scientists to dissimulate about where Australia’s inhabitants came from to protect their feelings and avoid contradicting their origin myths.  But it’s too bad if people’s feelings are hurt by the truth, especially when the truth is an important part of anthropology and history.

It is as if, in America, anthropology and evolution professors were told to avoid saying that hominins evolved from our common ancestor with chimpanzees beginning about six million years ago. After all, such a statement would hurt the feelings of the 38% of Americans who adhere to young-Earth creationism as described in Genesis. And surely that is a higher percentage of Americans than of aboriginals in the Australian population.

In an issue like this, there can be no compromise with truth, no catering to the false beliefs of minority groups. It’s doubly shameful that this initiative came in part from Dean Emma Johnston, who has a background in estaurine science.

But science is not a form of postmodernism in which all truths are equal. And a truth universally acknowledge by those who have studied the data is that the ancestors of indigenous Australians came to the continent roughly 50,000 years ago.

Shame on you, University of New South Wales and Dean Johnston! I hope, and trust, that the University scientists will ignore your ridiculous guidelines.

I’ll be sending a polite note to Dr. Johnston, whose contact details are at the link.

70 thoughts on “Ideology versus science (again): University of New South Wales urges professors to lie about the arrival date of Aboriginals”