Reader Mark Jones called my attention (as did other readers) to this three-part BBC show with an accommodationist theme (click on screenshot), whose first part aired yesterday morning in the UK. Mark did some digging on the show and its host, Nick Spencer, and found substantial Templeton influence and dosh behind it. His summary is below as a standalone post, and, following that, his take on the first show.

You can now listen to the 27-minute show in the U.S. by clicking on the picture below: 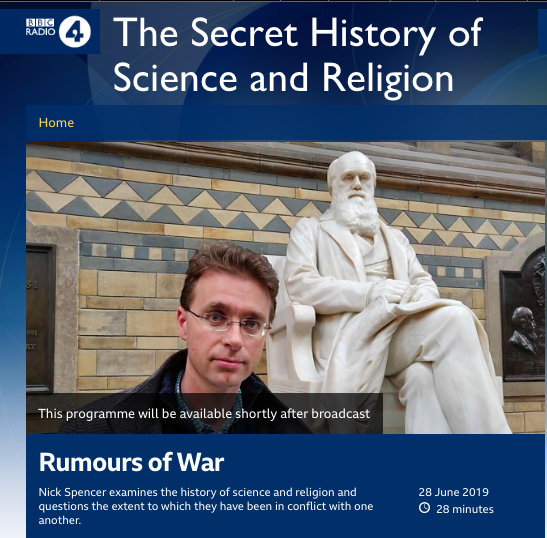 The Not-so-secret History of Science and Religion

I notice that the faitheist BBC are now to broadcast a three-part program pushing the agenda of the Templeton Foundation.

Nick Spencer is a Senior Fellow at the Christian thinktank Theos, and is responsible for the 2009 Templeton funded project “Rescuing Darwin” (to the tune of $600,000!!, according to page 214 of this book).

The aim of the “Rescuing Darwin” study:

“Both Darwin’s position and his spirit of engagement need to be rescued from the crossfire of a battle between the militant godly and militant godless who, though poles apart on so many issues, seem to agree that evolution threatens belief in God.”

(Just to reinforce the point about Templeton funding of ‘science and religion’, there’s a 2017 grant of $2.4m for the Faraday Institute—which Spencer works with—to ‘to finance a 20-year lease on a set of bespoke new-build offices which will provide a secure home for The Faraday Institute to develop over the next two decades’.)

Spencer has written a report on the conflict, drawing on the data from that project and other sources, which analyses the conflict via people’s attitudes to it, rather than using analysis of the inherent contradictions between the two fields. Even here it’s clear that the data indicate a conflict:

“…it is certainly not the case that the data show no conflict between religion and science in public perception, or no religious antagonism toward science. In particular, evolution is an issue for certain religious believers, disproportionally independent (evangelical) Christians, Pentecostals and Muslims. Longitudinal data simply do not exist here, but it would be reasonable to guess that levels of anti-evolutionary feeling have increased over recent decades, perhaps in line with the fragmentation of the Christian landscape and/ or with the prevalence of creationism and Intelligent Design in the US – even if the level of anti-evolution sentiment reached is usually less than headlines allege, and nothing that would merit the idea of a “war” on science.”

Note the attempt to diminish the conflict at the end. His conclusion:

“In short, while we should not underplay the extent to which there is a perceived conflict in some quarters, between science and religion, nor should we overplay it, exaggerating it into a full-scale war between vast and irreconcilably opposed armies. Rather, we should seek to understand it in its complexity and respond, not with disparagement or contempt, but with intelligent and reasoned dialogue.”

He is now “embarking on a major study, again in partnership with the Faraday Institute, funded by the Templeton Religion Trust, to explore this landscape in unprecedented detail”. I can’t find details of this, but knowing Templeton, the grant will be a generous one.

And now the BBC are going to give Spencer a megaphone to push his soft-soaping of the conflict. Great!

I’ve listened to the first episode now [JAC: you can listen as well; see above], and it was the familiar rejection of the conflict thesis with which we are familiar.

Spencer cited a number of celebrated instances of science ‘apparently’ conflicting with religion, but sought to persuade us that these were not quite as conflicting as we might think. Unfortunately, his analysis amounted to “It was more complicated than simply science vs religion, ergo, no conflict”. Well, it’s true that it was more complicated than simply science vs religion, but that does not show there was not still a conflict between science and religion. In one instance, someone said the Galileo affair was about science against science and religion against religion. This is no doubt true, but doesn’t gainsay the obvious maleficent effect of religion on science at the same time. The Catholic Church even apologised for it, with Pope John Paul II writing:

“The error of the theologians of the time, when they maintained the centrality of the Earth, was to think that our understanding of the physical world’s structure was, in some way, imposed by the literal sense of the Sacred Scripture.”

That is practically the conflict in a nutshell.

It was disappointing for a program on the BBC not to seek out contrarian views to challenge Spencer’s argument. He spoke to other faitheists like Peter Harrison and Tom McLeish to support his views. Fair enough, but it would have been instructive to see how he responded to challenges to his narrative. Maybe he will do that in later programs.

The BBC is not required to have balance within a (non current affairs) program, but needs to show it across its output, so this isn’t a breach of any guidelines—as I understand them. However, I would be surprised if the BBC ever made a series pushing the conflict thesis. I’m not aware of one in the past.