This is about the most hypocritical gesture I’ve seen from the Left since the Chicago Dyke March refused to allow Jewish “gay pride” flags (a star of David on a rainbow-colored banner) in its celebratory march two years ago.  According to many sources, including the three below, the DC Dyke March, which took place in Washington on Friday, banned all “nationalist symbols”. That included Israeli flags, Jewish gay pride flags, and American flags. They apparently still allowed marchers to wear Jewish symbols like yarmulkes or Star-of-David necklaces. And of course Palestinian flags were permitted (and perhaps encouraged!). 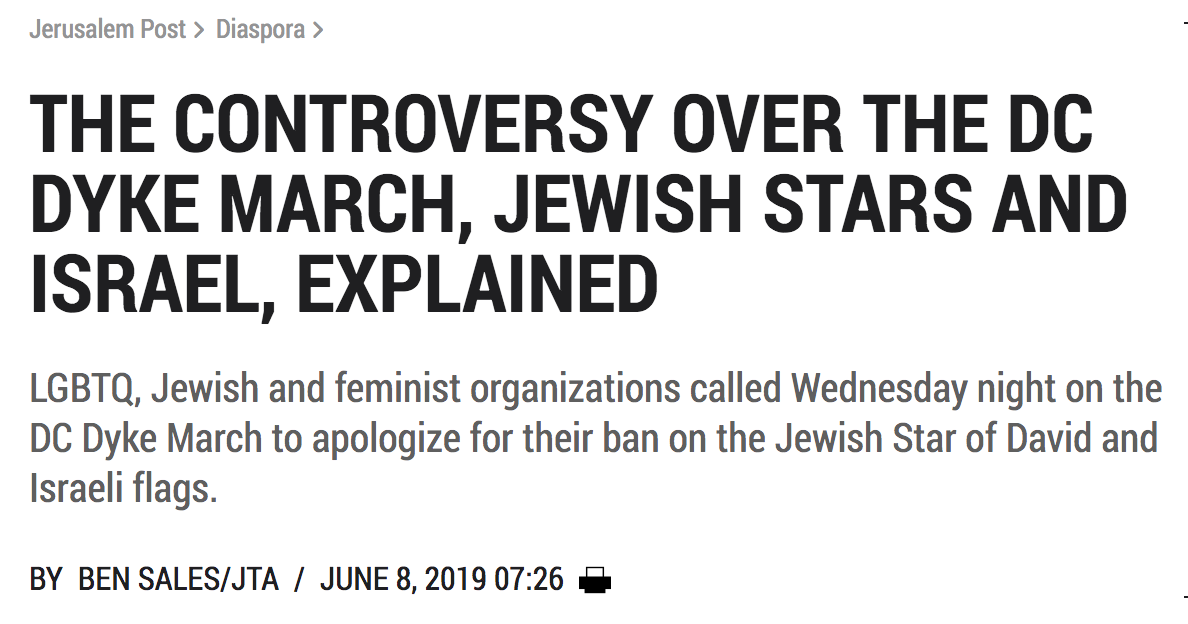 What is the DC Dyke March?

The DC Dyke March is an alternative parade to the main LGBTQ parade taking place this weekend in Washington, D.C. Its politics have traditionally been to the left of more mainstream pride marches. It’s one of a movement of Dyke Marches that have taken place nationwide.

The Dyke March’s description on its fundraising page says it’s focused this year on combating gentrification and displacement.

“Our goal is to encourage activism within our community and center transwomxn, queer womxn, nonbinary, lesbian, and other dyke identities who are oft-marginalized by the mainstream LGBTQ movement,” the webpage says, using an alternative spelling for “woman.” “We believe Dyke is not a sexuality, but a political identity centered on solidarity in each other’s struggles and a belief that none of us are free until we all are.”

If it’s focused on gentrification, why is everyone talking about Israel and Jewish stars?

One of the march’s policies is to discourage “nationalist symbols.” According to organizers of the march, that includes Israeli flags and American flags, which are the only ones they have mentioned specifically.

But the organizers are taking that policy one step further, and asking marchers not to bring a longtime symbol of LGBTQ rights, rainbow flags, with Jewish stars superimposed on the center. March organizers say those flags are reminiscent of the Israeli flag, which they say could feel threatening to Palestinian marchers. “We choose to prioritize Palestinian lives and justice in Palestine over lazy symbols,” organizers write.

The flags of other countries besides America and Israel are permitted. AsJill Raney (a Dyke March organizer) argued, American flags (and of course Israeli flags) are prohibited because these countries commit “human rights abuses.” The Post adds this:

“Palestinian flags are allowed because we believe they represent the hope for freedom for the Palestinian people,” Raney said. “The symbols of liberation are the whole point of Dyke March. Symbols of governments that cause human rights abuses are not welcome.” She didn’t explain how the Palestinian flag is not nationalist.

And of course, the red herring of “safety” comes up. March organizer Rae Gaines said this (my emphasis):

“The issue [with the Jewish Pride flag] is where the Star of David is positioned in a way that looks like an Israeli flag, it creates an unsafe space,” she said. “It really is a shame that Israel took this symbol of Judaism and turned it into this nationalist symbol….I understand the Jewish pride flag is a symbol that a lot of Jews have come to embrace, but there are so many other Jewish symbols that we can use to express our Judaism, like a Star of David [on a necklace], like a yarmulke, a tallit.”

Unsafe space? Seriously? Are these people 13 years old or something? I would think that it would express a form of solidarity if Palestinian dykes and Jewish dykes could march together with the emblems of their land. Only an idiot would claim that a Star of David on a rainbow flag would create an “unsafe space”.

The Palestinian flag is more than “not nationalist”, though Palestine isn’t yet a nation. It is the very symbol of oppression—of women and gays. The blatant hypocrisy of this whole Dyke March ban, which smacks of anti-Semitism, is demonstrated by the fact that that Palestine is a huge abuser of human rights, especially of gay people, women, and non-Muslims. “Dykes” are gay women, and both of those characteristics are oppressed not by Israel, but by Palestine. Go to the Wikipedia page on “LGBT rights in the State of Palestine” to see the discrimination faced by LGBTQ people in Palestine, which notes:

Homosexuality is illegal in the Gaza Strip but not in the West Bank, although LGBT rights are not protected in either. [Note below that lesbianism isn’t explicitly banned.]

. . . According to a 2010 compendium of laws against homosexuality produced by the International Lesbian, Gay, Bisexual, Transsexual and Intersex Association (ILGA), the decriminalization of homosexuality in Palestine is patchwork. On the one hand, same-sex acts were decriminalized in the Jordanian-controlled West Bank in 1951 and remain so to this day. On the other hand, in the Gaza Strip, the British Mandate Criminal Code Ordinance, No. 74 of 1936 remains in force and continues to outlaw same-sex acts between men, although lesbian women are not subjects of the code and their relations are thus, technically, not unlawful. Palestine has no civil rights laws that protect LGBT people from discrimination or harassment.

In the Hamas-controlled Gaza Strip, gays have been killed by either Hamas or their own families, and even a Hamas commander, as reported by the New York Times, was killed at least in part because he was gay.

The UNFPA also reports that “Gender Based Violence (GBV) is a key protection concern in Palestine. According to Palestinian Central Bureau of Statistics (PCBS) 2011 Violence Survey, an average of 37% of women are victims of GBV in Palestine; in the Gaza Strip, this percentage increases to 51%. Women in Palestine face multiple layers of violence and discrimination.” Of course the website blames this not on Islamic culture, but on “traditional patriarchal norms and values” and on “the occupation and its consequences” (Islam isn’t mentioned at all, and I’m not quite sure how the occupation leads to gender-based violence since many other Islamic countries that aren’t occupied oppress or even execute gay people).

Women in Palestine are often subject to oppressive sharia law, including grossly asymmetrical divorce laws, for Palestinian law is explicitly based on Islamic law.

Finally, it’s well known that while there is a dwindling number of Christians in Gaza and the West Bank, there are either no Jews or almost no Jews in Palestine (I’m not aware of any, but there may be one or two closeted Jews who would be killed if they were outed). In contrast, nearly 18% of Israelis are Muslims, and Israel harbors many Christians and members of other faiths. Atheists, too, are discriminated against in Palestine, while many Israelis (perhaps most) are nonbelievers. I have to add the caveat that I am not a complete supporter of Israel’s or Netanyahu’s policies, but on this issue—gay rights, women’s rights, and religious rights—the demonization of Israel and extolling of Palestine is ridiculous.

In short, you have to be blind or an idiot to think that Palestine is more friendly to gays or women than is Israel, which has a thriving gay community and much stronger protection of women’s and gay rights. And of course Israel is loaded with atheists.

The position of the organizers of the Dyke March, which tacitly celebrates a territory that openly oppresses women and Muslims, can be understood only by the festering anti-Semitism of the Left. Why? Because the Left traditionally sides with underdogs, and they perceive Palestinians to be far more underdoggish than are Jews. This is why gays side with cultures that demonize and kill them rather than with cultures that tolerate or even celebrate them.