Greg Mayer and I written four times (1, 2, 3, 4) about Harvard’s misguided decision to punish students who joined off-campus single-sex clubs. These clubs—there are now eleven—are both all-male and all-female, and comprise the famous “finals clubs”, which are basically social organizations, equivalent, I suppose, to fraternities and sororities.

While I never had any interest in joining such clubs, it’s beyond Harvard’s ambit to punish students who join groups that are not affiliated with the University. This violates freedom of association, and the existence of the clubs themselves is not illegal.  Yet Harvard, at the instigation of ex-President Drew Faust and Dean Rakesh Khurana, went ahead and imposed sanctions on students joining these clubs. As I wrote in December of 2017:

Beginning with the class of 2017 [now with students entering in 2018; see below], any Harvard student found belonging to a gender-exclusive group will experience these sanctions (taken from the Post article):

I thought, and continue to think, that this is a terrible idea, for it violates Harvard’s own policy of allowing students freedom of association. Why should they be punished for what they do off campus so long as they adhere to the student code of conduct on campus? And I’m not the only one who thinks this; Steve Pinker weighed in here, agreeing with many Harvard faculty as well as the Foundation for Individual Rights in Education (FIRE), which sent a letter of protest to Harvard.

Now, according to the Harvard Crimson, a group of lawmakers in the House of Representatives has introduced a law that would prevent colleges from blocking students’ freedom of association. Unlike a previous Republican bill that included freedom of association as one provision, and failed, this bill is sponsored by 8 Democrats and 6 Republicans. Click on the screenshot to read the Crimson‘s piece: 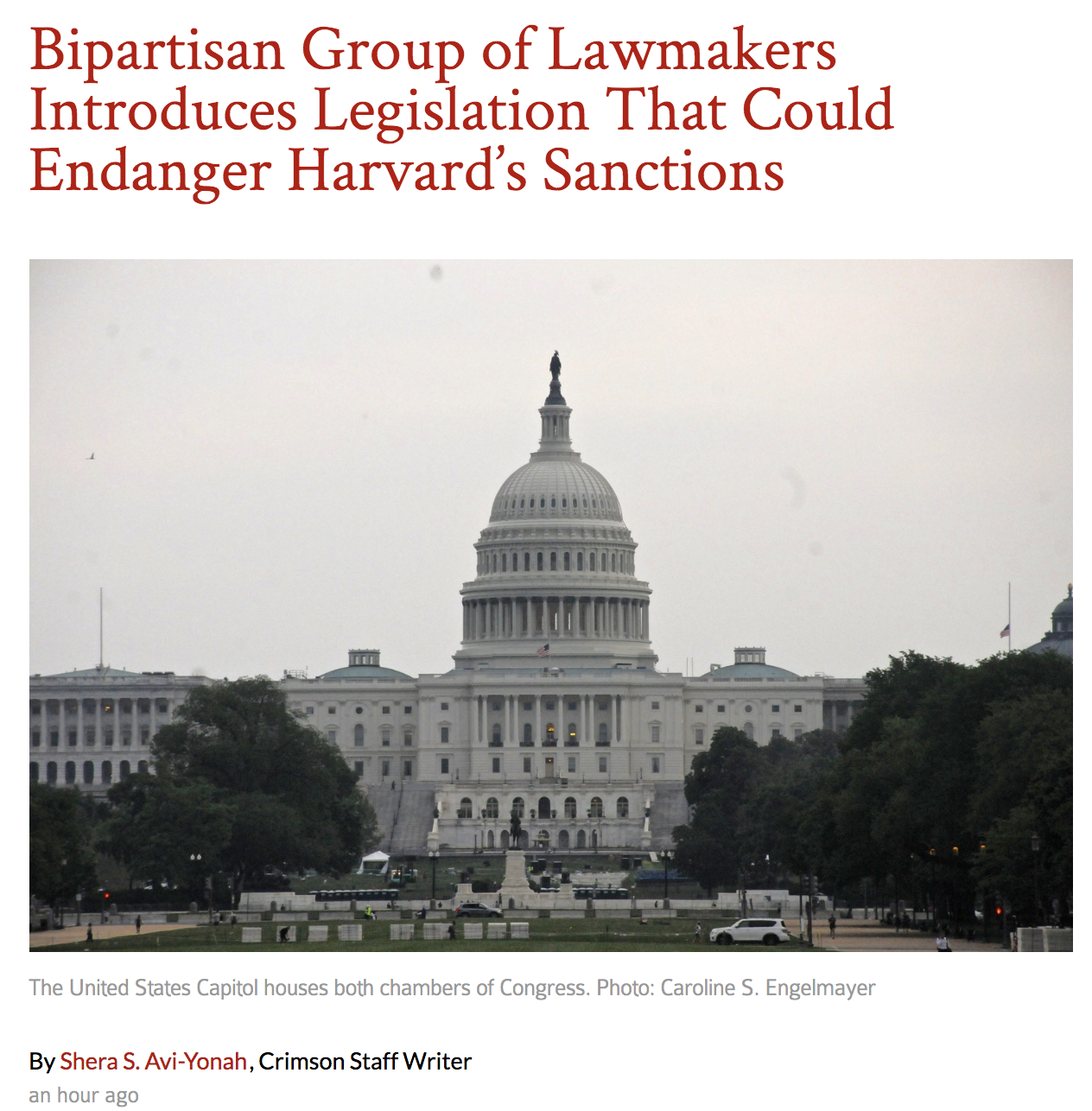 A bipartisan group of lawmakers introduced a bill in the House of Representatives that could imperil Harvard College’s social group sanctions Wednesday.

The bill — called the College Freedom of Association Act — seeks to amend the Higher Education Act “to uphold freedom of association protections,” according to a summary.

The CFAA would prevent universities from penalizing students who are members of single-gender organizations, whether or not the groups are officially recognized. If passed, it would almost certainly bar the College from enforcing its policies.

The College’s sanctions — which took effect with the Class of 2021 — bar members of unrecognized single-gender final clubs, fraternities, and sororities from holding leadership positions in recognized student groups, captaining varsity athletic teams, and receiving College endorsements for certain prestigious fellowships like the Rhodes.

Rep. Ruben M. Gallego ’02 (D-AZ), who introduced the bill, wrote in an emailed statement that his decision to support it is rooted in his own fraternity experience at the College.

“All Americans have a constitutional right to freedom of association, and this legislation merely reinforces these rights for students enrolled in college,” he wrote. “I have personally benefited from opportunities to form life-long friends at Harvard University as a member of Sigma Chi, and that support system helped me through difficult times after I returned from the Iraq war.”

The CFAA marks the second legislative attempt that could impact the sanctions in the past two years. A group of Republican representatives spent much of 2018 pushing for a revision to existing higher education law called the PROSPER Actthat dealt in part with social group policies. Last year, experts said that bill was almost certainly doomed.

The new bill is slightly different, however. Its sponsors, numbering eight Democrats and six Republicans, represent a cross-section of the 116th Congress. At least one of them — Rep. Elise M. Stefanik ’06 (R-NY) — was also involved in pushing PROSPER.

Now I’m not sure whether a college can refuse to officially recognize single-sex or single-gender organizations. Although I’m not a lawyer, on what grounds could anybody force a university, either private or public, to recognize University-affiliated single-sex clubs? Would that have anything to do with recognizing men’s sports teams versus women’s sports teams? It seems to me that a university, especially a private one, could do what it wants about this issue when the proposed organizations have a formal affiliation with the college.

But off-campus organizations are a different matter. There is no justification I can see for Harvard punishing students for joining unofficial finals clubs, and it was wrong to do so. I don’t know if this bill will pass. And I don’t know Gallego very well (he’s a Harvard alum), but he doesn’t seem to be a conservative Democrat. As far as I’m concerned, this provision of the bill should pass, and has the bonus of being a slap in the face to the odious Rakesh Khurana.