Reader Gregory called my attention to this piece in the Washington Post (it may be paywalled for you, but judicious inquiry might yield a copy). Click on screenshot to read:

Now the University of Wisconsin campuses are public institutions, and are therefore covered by the First Amendment. But many people are calling for a suppression of free speech in this latest case, in which a student, during the campus celebration of Israel Independence Day, held up a sign that, says the Post, had a swastika and the word “Gas.”

Joel Berkowitz was outraged when a University of Wisconsin at Milwaukee student held a sign bearing a swastika and a hateful message directed at students celebrating Israel’s independence: “Gas,” the sign said.

In other words, the sign’s message was “Gas the Jews”.  In fact, the sign was considered so horrible that the picture accompanying the article, taken from a tweet, had the sign censored, even though there was no censorship in the original tweet from the Simon Wiesenthal Center.

Original tweet. Curiously, I don’t see the word “gas” on the sign, and it’s hard to make out what the other words are:

At the University of Wisconsin – Milwaukee, @uwmpolice stand idly by as a student taunts his #Jewish peers with a swastika for over 3 hours. @UWM, is this what student fees are going towards? pic.twitter.com/oakNTCKpr7 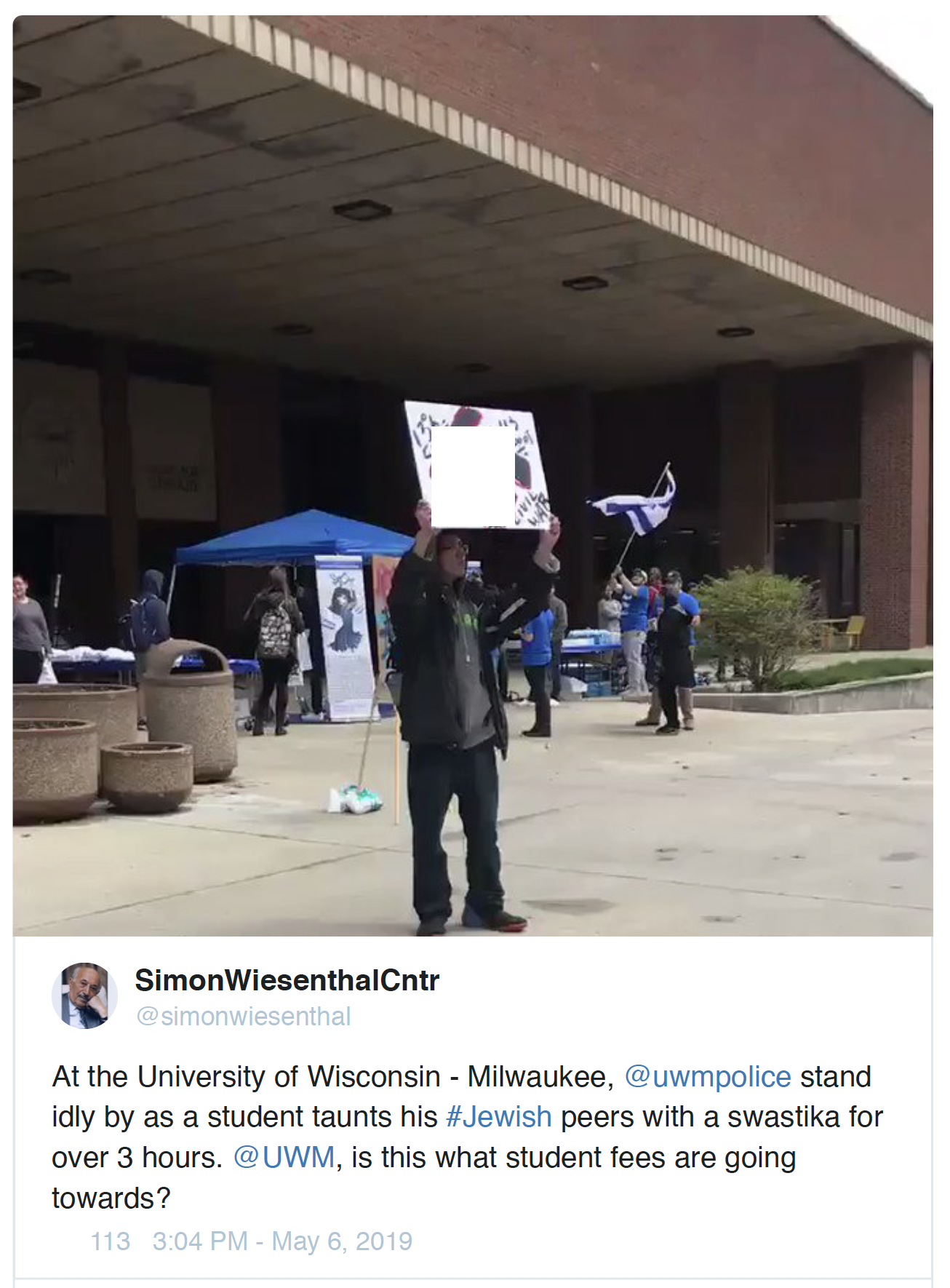 Crikey, did they really need to blot out the swastika and the message? The Simon Wiesenthal Center, a pro-Jewish organization, didn’t find it necessary!

At any rate, the students were outraged, as were faculty like Joel Berkowitz, who runs the school’s Sam and Helen Stahl Center for Jewish studies.  Here are some quotes by Berkowitz and others about how this student should have been punished or even beaten up:

“They weren’t even denouncing a swastika in the middle of campus,” Berkowitz said in an interview. Yet Berkowitz, whose family includes Holocaust victims and survivors, acknowledged the difficulty honoring the principles of open discourse and respecting dissent that pushes the limits of decency. Shouldn’t limits be placed on speech so repugnant — gas the Jews — that it implies a threat of violence, he wonders?

“No one that I’m talking to is saying that we should ride roughshod over the First Amendment,” Berkowitz said. “But there are discussions about what are the limits of free speech. They are not absolute.”

Sadly for Dr. Berkowitz, this sign falls squarely within the limits of free speech as defined by American courts. Even if the sign did say “Gas the Jews”, that’s not an incitement to imminent violence against the Jews. For crying out loud, this lone moron is not going to inspire people to immediately run out and buy Zyklon B!

There’s more. The Provost issued a statement decrying the speech but asserting that the protest was legal. (I’m not even sure he should have given an opinion on the speech. While the sign is clearly odious and disgusting, what should a university say about less repugnant forms of “hate speech”?)

The May 6 incident on the Milwaukee campus began when students organized a rally marking Israel’s independence, and a student appeared with a sign showing a swastika. Calls for disciplinary action against the student, including expulsion, started soon after, and Mone issued his first statement the following day.

“Under the First Amendment, displaying offensive symbols, such as a swastika, to a general audience in a public space is protected akin to speech,” Mone wrote. “Nevertheless, please know that we emphatically renounce such hateful symbols and do not support or condone any viewpoint that is hurtful, harmful or disparaging.”

For some, the chancellor’s words made things worse. Mone apologized and acknowledged that his first statement had fallen short.

“Please know I have heard you and acknowledge my message did not fully capture or reflect how deeply saddened, frustrated and angry I am personally, as a member of this community, that anyone would inflict such pain and fear on our Panther family,” he wrote. “I strongly condemn the swastika and other messaging that it contained for what it is — hateful, anti- Semitic and an affront to our University’s values and dedication to inclusivity and diversity.”

His “clarification” smacks of bullying, as the first statement is fine—if you even require that the University express an ideological opinion. And of course even the later apology didn’t satisfy the mob, who wanted the student expelled, arrested, or even worse. They seem to have forgotten the ACLU’s defense, on First Amendment grounds, of the Nazis marching through the Jewish suburb of Skokie, Illinois in 1977. The Supreme Court allowed the Nazi march to take place.

[Provost] Mone declined to comment. Other university officials, citing privacy laws, wouldn’t say whether disciplinary action had been taken against the student. But as the controversy spread, students and members of the Jewish community criticized the university’s apparent lack of action.

“How evil! He should be arrested!” a commenter wrote on Artists 4 Israel’s Facebook page.

. . .Some responded with strong language of their own.

“Of course, there’s always an alternative resource that’s also available on and off-campus, which employs a blanket, three hefty individuals and a baseball bat,” read an article on JewishPress.com, an online site for the largest weekly Jewish newspaper in the United States.

Jebus, and shades of Evergreen State! Not even milkshakes are enough for this miscreant. He should be wrapped in a blanket beaten up with a baseball bat!

Berkowitz wants a process established, even though there are already ample legal guidelines for what constitutes free speech (and this is free speech).

Berkowitz said the school’s response should include establishing a formal process to determine whether a university member should be penalized for hateful speech that shades toward a threat, as he believes occurred here.

“Just because you have the right to say something under the Constitution doesn’t mean you can do whatever you want. There can be other kinds of policies in place,” Berkowitz said.

Look, I’m an atheistic Jew, and generally more sympathetic towards Israel, and condemning of anti-Semitism, than many on the Left. But what happened with the anti-Semite above is simply his exercise of free speech. Seriously, does he pose an immediate threat to Jews? Of course not! He will be demonized and shunned on campus from now on, and deserves that opprobrium. This is one reason to have free speech: even when it’s repugnant, it allows you to identify those who are your enemies, and to counter them with your own speech.

In my view, the best thing to do would have been to ignore this guy. He wanted attention and he got it. If nobody commented on this, or made it a big deal, others like him would be less likely to sell their wares. If you want to stop actions like his, ignore it. He is not a threat to Jews.

The world is full of anti-Semites, and unless you think their speech deserves a response (this incident does not), you should ignore them. If you think that this kind of speech will lead to more anti-Semitism, then fight it with counter speech. But don’t try to punish those exercising their First Amendment rights. That is a slippery slope, and believe me, “hate speech” is a slippery slope.

This reminds me of part of Andrew Sullivan’s column in New York Magazine this week (click on screenshot):

I’m not referring to the title article, which is about immigration (and well worth reading), but about the nastiness of the Internet, and about Sullivan’s views on “hate speech” being banned or de-monitized on YouTube (Sullivan doesn’t like that). At the end of the second bit, Andrew says this (“Maza” is Vox producer Carlos Maza, who, tired of being called “faggot” and other homophobic names by the right-wing YouTuber Steve Crowder, launched a successful campaign to get Crowder and others demonitzed an/or blocked on YouTube):

It’s not fun to be called names. But as a cab driver once told me, “Butch it up, honey. It’s gonna be a tough decade.” I’ve been openly gay since 1987 and an openly HIV-positive writer and editor for 23 years. The sheer scale and ferocity of the hatred and abuse — from right to left — I have absorbed during that time is hard to describe. There was close to a decade at the Dish when I was emailed almost every day by someone saying I had AIDS dementia. I’ve been called every variety of “faggot” you can imagine, been assaulted in public by a political foe, been picketed, heckled, and am now routinely described as an anti-Semite, a white supremacist, a eugenicist, a misogynist, a transphobe, and just the other week was compared to Ernst Röhm, an actual gay Nazi. None of this is pleasant, and there are times, I confess, when it gets me down, as it is intended to. But the idea that I would go running to the big-tech muckety-mucks and try to get my verbal abusers punished or canceled for it? Not in a million years. I’m a grown man. This is a free country.

You need to learn how to ignore abuse in the public square; you need to live with the fact that people will lie about you; you have to set boundaries and stick to them. I don’t care about what people say about me as long as it isn’t true — and if it is true, and I’ve fucked up in some way, I’ve learned to be grateful for it, even if that takes a while. Maza is young, so maybe this desire to shut down other voices or run crying to the authorities because mere words hurt his feelings will wane. I sure hope so.

“I’m an adult. This is a free country.” Those are words worth remembering, especially for the outraged folks at the University of Wisconsin. Part of living in a free country is tolerating free speech and not crying to authorities when they host free speech that offends you.

84 thoughts on “Free-speech suppression at the University of Wisconsin”