Seven years ago (that long???!), I wrote about the giant stick insects (phasmids) found on a pinnacle of rock (“Ball’s Pyramid”) near Lord Howe Island, which lies between New Zealand and Australia. (See the posts here, here, and here.) Lord Howe is an oceanic island—the remnants of an ancient volcano—and home to many endemic species of plants and animals.  As I wrote earlier:

I’ve written twice before about Drycoceocelus australis, the giant stick insect of Lord Howe, an isolated volcanic island in the South Pacific (see here and here). The beast was once thought to be extinct, but climbers found 24 on Ball’s Pyramid, a jutting vertical spire of rock about 8 km from Lord Howe. They’re “YUUUJE,” as Philomena would say: up to six inches long and weighing nearly an ounce. They look like this, showing why their nickname is “tree lobsters”: 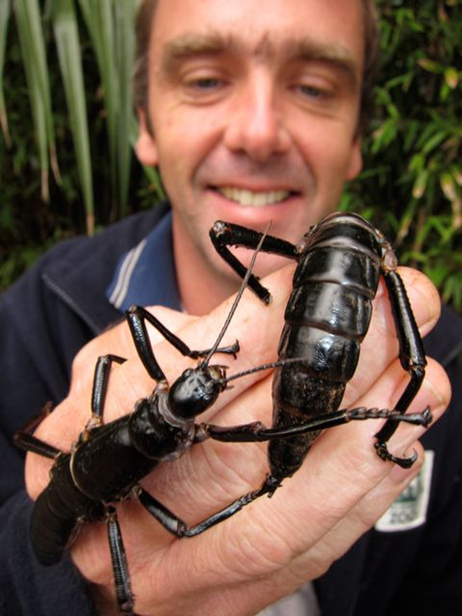 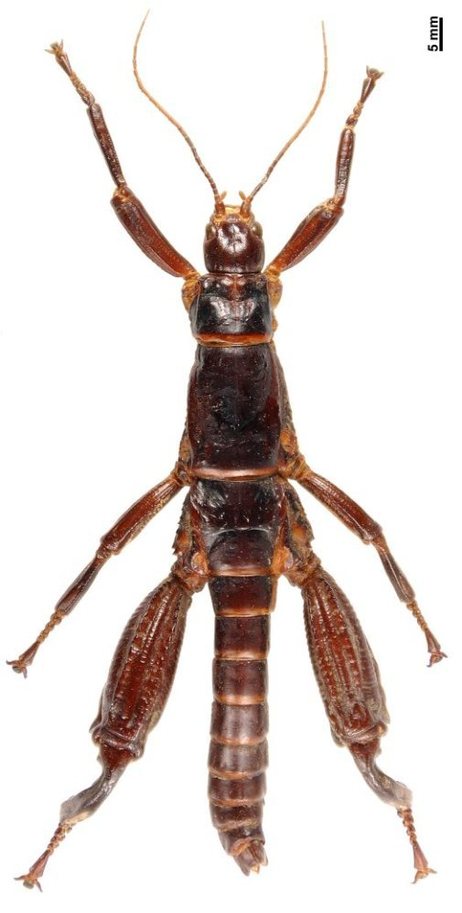 Here’s Ball’s Pyramid, where the insects were found by explorers in 1964. As the Pyramid was  part of the volcano that created Lord Howe Island, and only 23 km away, the stick insect was once numerous on Lord Howe, too, though it was wiped out by 1920 by a combination of fishing (they were used for bait) and rodent invasion. 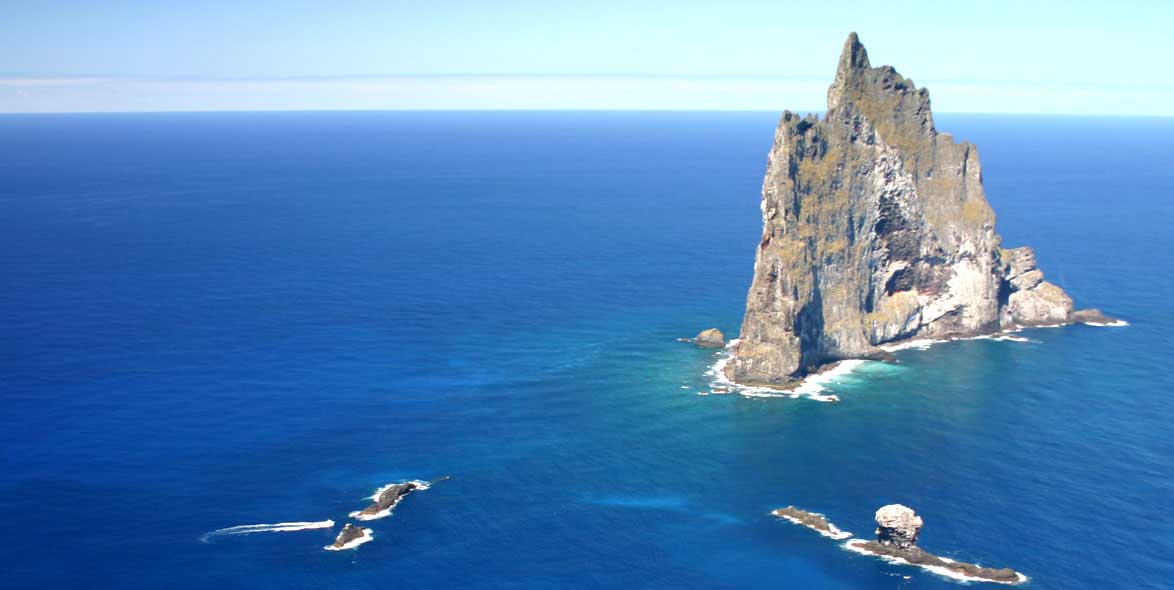 Although the insects were thought to be extinct after 1964 on Ball’s Pyramid as well, climbers in 2001 found a small population—only 24 stick insects. These were recovered and brought to Melbourne to expand the population for possible re-introduction on Lord Howe, as described in this post and the video below:

But reintroduction wouldn’t work on Lord Howe so long as there were rodent predators there. So, hand in hand with the captive breeding program, a process of rodent extirpation is now planned to begin this year, as described in this news piece in Science (click on the screenshot): 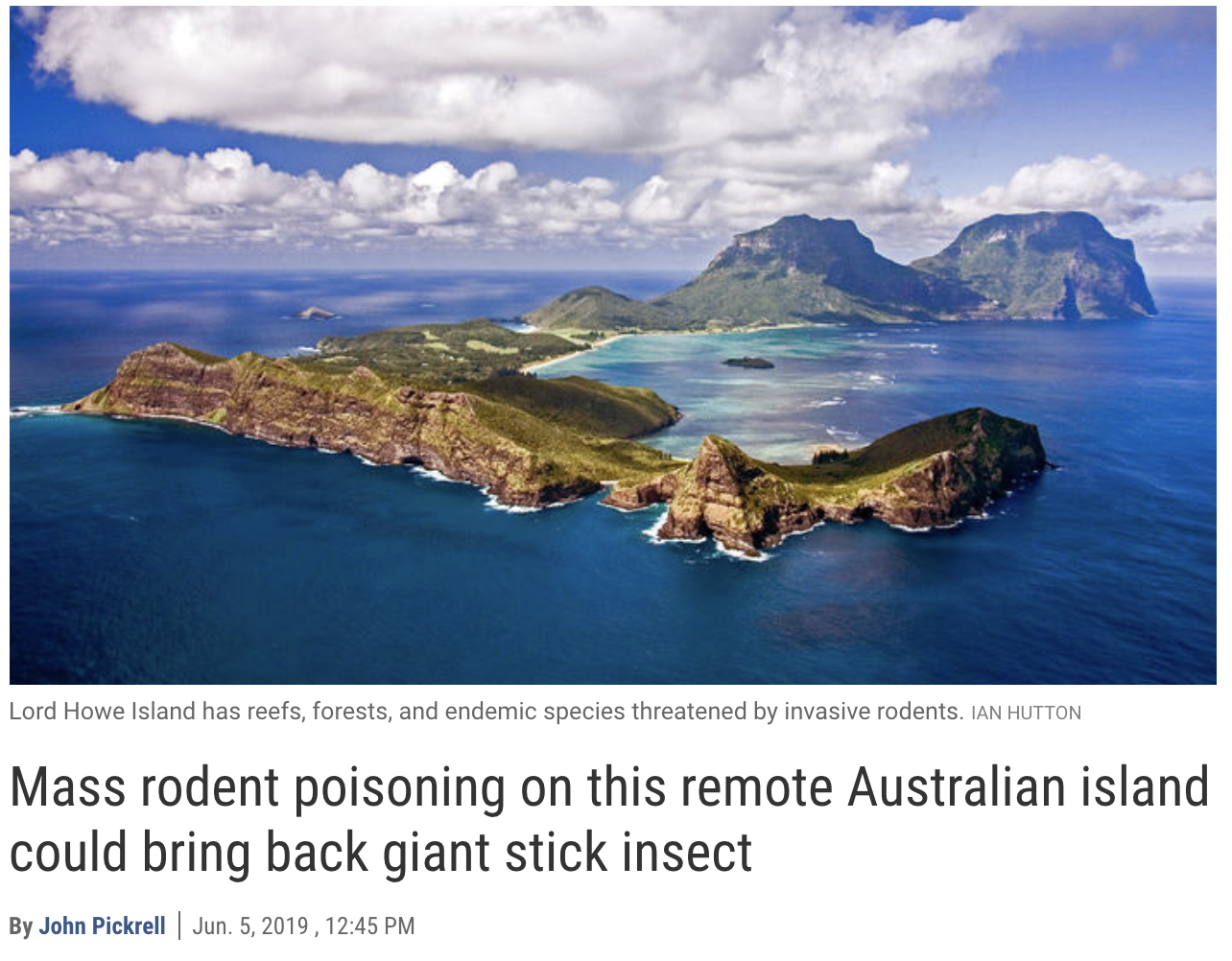 . . . the Lord Howe project, years in the making, “will be the largest rodent eradication undertaken on a permanently inhabited island anywhere in the world,” says Andrew Walsh of the Lord Howe Island Rodent Eradication Project, who is overseeing the effort to spread 42 tons of poisoned cereal pellets across the island. Some 28,000 bait stations were filled across farmed and residential areas starting 22 May, and helicopters will scatter baits over more forested and mountainous parts of the island as soon as weather permits.

Walsh and his colleagues hope to undo some of the damage from the voracious rodents, which have wiped out five endemic birds, two plants, and 13 insects, including the 15-centimeter-long, black, waxy-looking Lord Howe Island stick insect, also called the phasmid or tree lobster (Dryococelus australis). Some lost species, including the phasmid, have subsequently been rediscovered on surrounding islets. Eliminating the estimated 360,000 rodents—including house mice, which arrived in the 1860s—could allow the native animals to return to the main island, and will also protect another 70 or more threatened species, such as the little shearwater, masked booby, and several endemic palms that grow in the island’s cloud forest.

I don’t know if this will work, for they have to get every single last rodent off the island (unless the last one is a male or non-pregnant female), and that would be hard. But they’re going ahead with the project, which will cost $ 7.3 million U.S. ($10.5 million Aus). Not everybody is in board with this, though, as some residents think the baits “might harm children, pets, cattle, and other wildlife or damage the lucrative tourist trade.” And the article adds:

People weren’t the only complication. Research in 2007 had revealed that the poison, a rodenticide called brodifacoum, might endanger two endemic birds, the Lord Howe Island woodhen and the Lord Howe Island currawong. Since April, a team from Sydney’s Taronga Zoo has been involved in rounding them up, housing the roughly 200 woodhens and 125 currawongs captured so far—more than half the wild populations—in aviaries and pens. The birds have “settled in beautifully,” says Leanne Elliott, wildlife conservation officer at the zoo. Once the poison has broken down, they’ll be released into the wild again, likely in stages toward the end of the year.

This is a massive conservation effort, and I hope it will work. The reintroduction of the stick insect is only speculative now, but will likely occur, since they plan a trial release of the Aussie-bred phasmids in 2021 on an islet in Lord Howe’s lagoon.

Here’s a prize-winning animation about the phasmids: “Sticky”.