UPDATE: I now have a copy of the Washington Post article, which says that Noa was turned away from euthanasia consultation because she was too young.  Further, we learn again, as I mentioned in Faith Versus Fact,  that the most vocal opponents of euthanasia are religionists.  Here, for example, is what Pope Francis said, the cluless git:

The Vatican mourned her passing Wednesday morning on Twitter. “Noa’s death is a great loss for any civil society and for humanity,” Pontifical Academy for Life wrote. “We must always assert the positive reasons for life.” Pope Francis, in a separate message, stated, “Euthanasia and assisted suicide are a defeat for all. We are called never to abandon those who are suffering, never giving up but caring and loving to restore hope.”

What were the positive reasons for Noa’s life? Does the Church’s judgments outweigh hers in that matter?

It’s almost like the church wants her to suffer. In fact, the Church often likes that: Mother Teresa thought the suffering of her “dying destitutes” was good because it enabled them to experience the suffering of Jesus.

The idea of “euthanasia” is repugnant to many people because it conjures up images of the Nazi treatment of children and the genetically “unfit”, or of your grandmother being forcibly killed against her will. In fact, “assisted suicide,” as it’s also known, is legal in seven U.S. states and in eight countries or parts of them.  I consider the responsible and legal implementation of assisted suicide as a sign of an enlightened society, to be used only when there are strict guidelines and the patient is suffering unbearably with a terminal condition (that condition includes depression and mental illnesses when they cannot be cured despite extensive efforts).

Assisted suicide for the incurably depressed is in fact legal in the Netherlands, but is not often used, and operates under strict rules. While it has been used (see here, for instance), it is quite rare, and in some cases having that option has made people who initially wanted to die decide to live.

Here is a summary the Dutch law from Wikipedia:

The mental illness issue is controversial, as many people think that the severely depressed and suicidal should be forced to live unless they decide to kill themselves on their own. I disagree, as in some cases depression does cause unbearable misery and is incurable. In those circumstances, and with proper legal and medical restrictions, I feel that such people should be allowed medical intervention to die. I know others won’t agree with me, but I see no use in prolonging unbearable suffering. (You can say that the depressed person might get undepressed, but terminally ill patients have also been known to recover, and those with treated but chronic suicidal depression for years are unlikely to revert.)

At any rate, yesterday there were many reports in both the popular and social media yesterday that a depressed 17-year-old Dutch victim of rape, Noa Pothoven, was euthanized by Dutch doctors. In fact, this was not the case: doctors refused to euthanize her (she was anorexic, severely depressed, had tried to kill herself several times, and had been institutionalized and given medication—all without improvement). As the Twitter feed below reports (and some checking indicates that it’s apparently true), Pothoven was refused legal euthanasia. She decided to die by refusing all food and water, in effect going on a hunger strike, knowing that this would kill her.

What the doctors did was palliative care that involved not force-feeding her. Can you object to that? What is indisputable is that this is not euthanasia, but suicide, with doctors not intervening in a way that would have doubled her suffering. Again, this is not euthanasia, which requires direct action by doctors to take someone’s life.

But such is the opprobrium of even the word “euthanasia” that the Western press (but not the Dutch press) almost uniformly reported this as euthanasia via medical intervention. Here, for example, is a result of a Google search this morning for “Rape victim euthanized”. Every article here says that she used “legal euthanasia”: 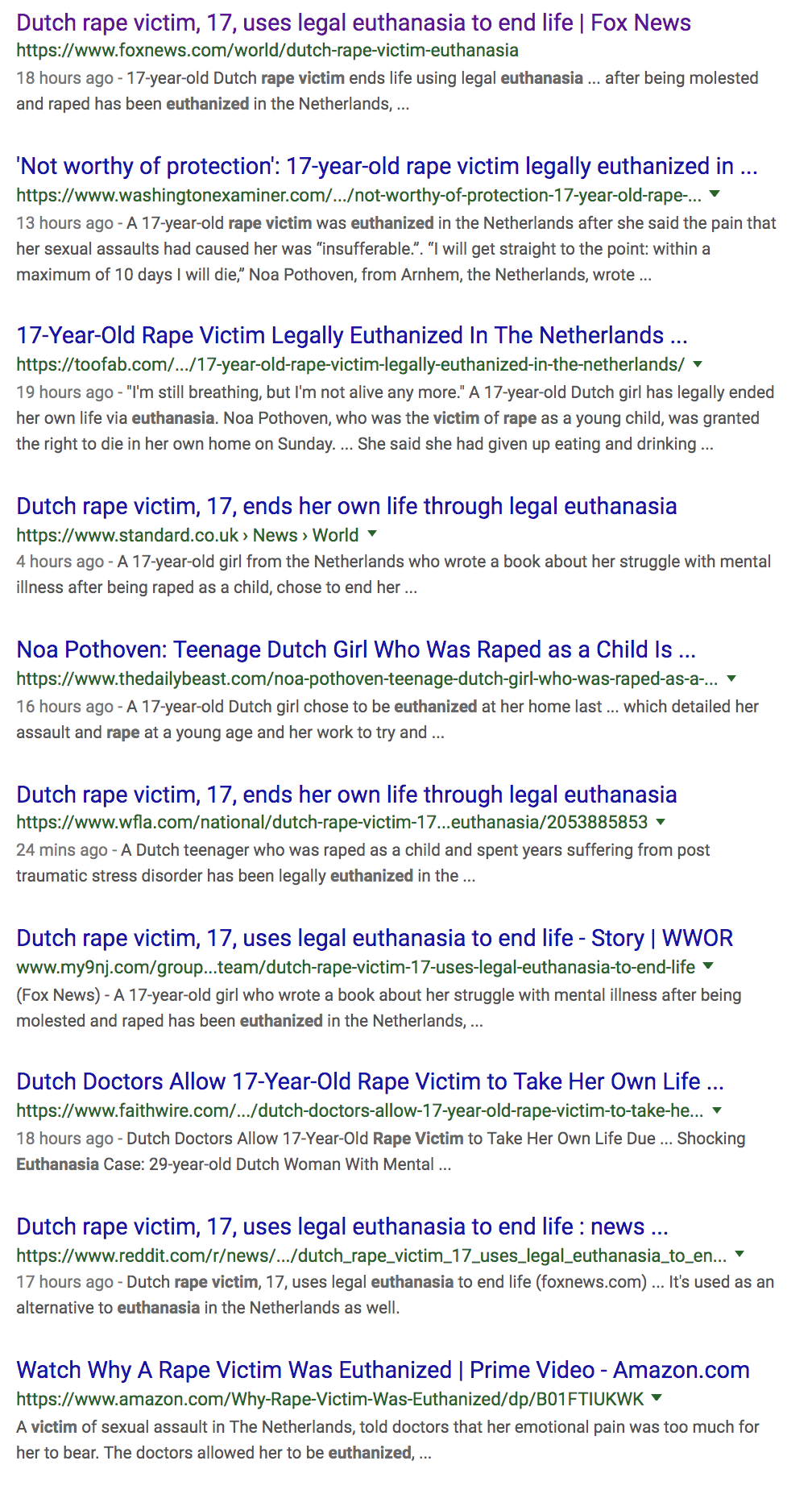 And some screenshots from Google:

If you read some sources closely, like The Daily Beast, you get a sense that “legal euthanasia” wasn’t really going on here (but who reads beyond the headlines these days?). Nevertheless, even that venue, and the Washington Post, report it as “legal euthanasia”. From the Beast:

A 17-year-old Dutch girl chose to be euthanized at her home last week after she said the pain of being raped and molested as a child had become “unbearable.”

Noa Pothoven, from Arnhem, Netherlands, wrote in an Instagram post a day before her death that she breaths [sic] “but no longer lives.” Her sister confirmed her death on Sunday. The Dutch first legalized euthanasia in 2001, the same year that Pothoven was born.

“It’s finished. I have not really been alive for so long, I survive, and not even that… I will get straight to the point: within a maximum of 10 days I will die,” Pothoven wrote in her native Dutch on Saturday. “After years of battling and fighting, I am drained. I have quit eating and drinking for a while now, and after many discussions and evaluations, it was decided to let me go because my suffering is unbearable.”

That “within a maximum of ten days” is a clue that she was not going to be euthanized with an injection or drinking barbiturates: this is a time-frame for dying by refusing liquids. But the Beast still characterizes implies that it was legal euthanasia:

In her book [Pothoven’s book Winning or Learning], she wrote that she was sexually assaulted at a school party when she was 11 years old, and was raped by two men just three years later when she was 14 years old.

Her mother, Lisette, said at the time that her daughter’s book should be mandatory reading for social workers and those responsible for adolescent psychological care. She also publicly criticized the fragmented mental-health system in the Netherlands, calling the bureaucracy “maddening.”

Pothoven had previously sought services at the End of Life Clinic in The Hague, but was reportedly turned away due to her age. Children as young as 12 can legally seek to be euthanized in the Netherlands, but a doctor must first determine that the patient’s pain is unbearable before they can be accepted. Seven such cases were accepted between 2002 and 2015, according to Alliance Vita, an international association that aids individuals and policy makers dealing with bioethical issues.

The practice was intended for those suffering from terminal cancer and similar excruciating physical conditions, but the law also allows people suffering from severe psychological pain to seek euthanasia. It is limited to those with intact mental faculties and “unbearable and hopeless suffering.”

Under Dutch law, the patient must repeatedly ask to die, a second doctor must agree in writing that the death is justified, and a post-mortem panel, made up of a doctor, a jurist, and an ethics expert, have to confirm that those requirements have been met.

Even the Washington Post reported in its headline that there was euthanasia involved:

I can’t read the entire article (it’s behind a paywall at the screenshot link), but I notice that at the top of the report there is now a “clarification”: “An earlier version of this story reported that Pothoven’s death came via euthanasia. It is unclear whether doctors assisted in her death, though she earlier requested their help.”

Nevertheless, the worldwide media reported this as legal euthanasia. Besides The Daily Beast and the Washington Post, misreporting occurred by the Independent and a gazillion other sources (just do a Google search).  In fact, it’s hard to find an accurate account of what happened. Even if they say she died after “requesting euthanasia,” which is formally correct, you’ll almost never see reports today that she died after refusing food and water. The corrections will start trickling in later—if ever.

A few places that got it right are here, here, and the Twitter feed below from Naomi O’Leary, a correspondent for POLITICO Europe.

Infuriatingly, it's too late: this misinformation has already spread all over the world from Australia to the United States to India. Her name, #noapothoven is even trending in Italy. pic.twitter.com/CN22J7xdkK

The family had tried many kinds of psychiatric treatment and Noa Pothoven was repeatedly hospitalised; she made a series of attempts to kill herself in recent months. In desperation the family sought electro shocktherapy, which was refused due to her young age.

A decision to move to palliative care and not to force feed at the request of the patient is not euthanasia.
Dutch media did not report Noa Pothoven's death as a case of euthanasia. This idea only appeared in English language pickups of Dutch reporting.

I had immediate questions reading the Dutch articles about whether this was a case of euthanasia or not. It would have been an enormous deal in the Netherlands if a 17-year-old really had euthanasia. It's really easy to check. Like I say, took me about 10 minutes. Infuriating.

If you ever worry about whether you can trust a story or not, a good way to check is to look up whether @Reuters is reporting it or not. I trained to be a journalist with @Reuters, this is what they do.

Here is Pothoven with her book. She’s gone now, and it’s very sad, but I can’t say that she made the wrong decision. 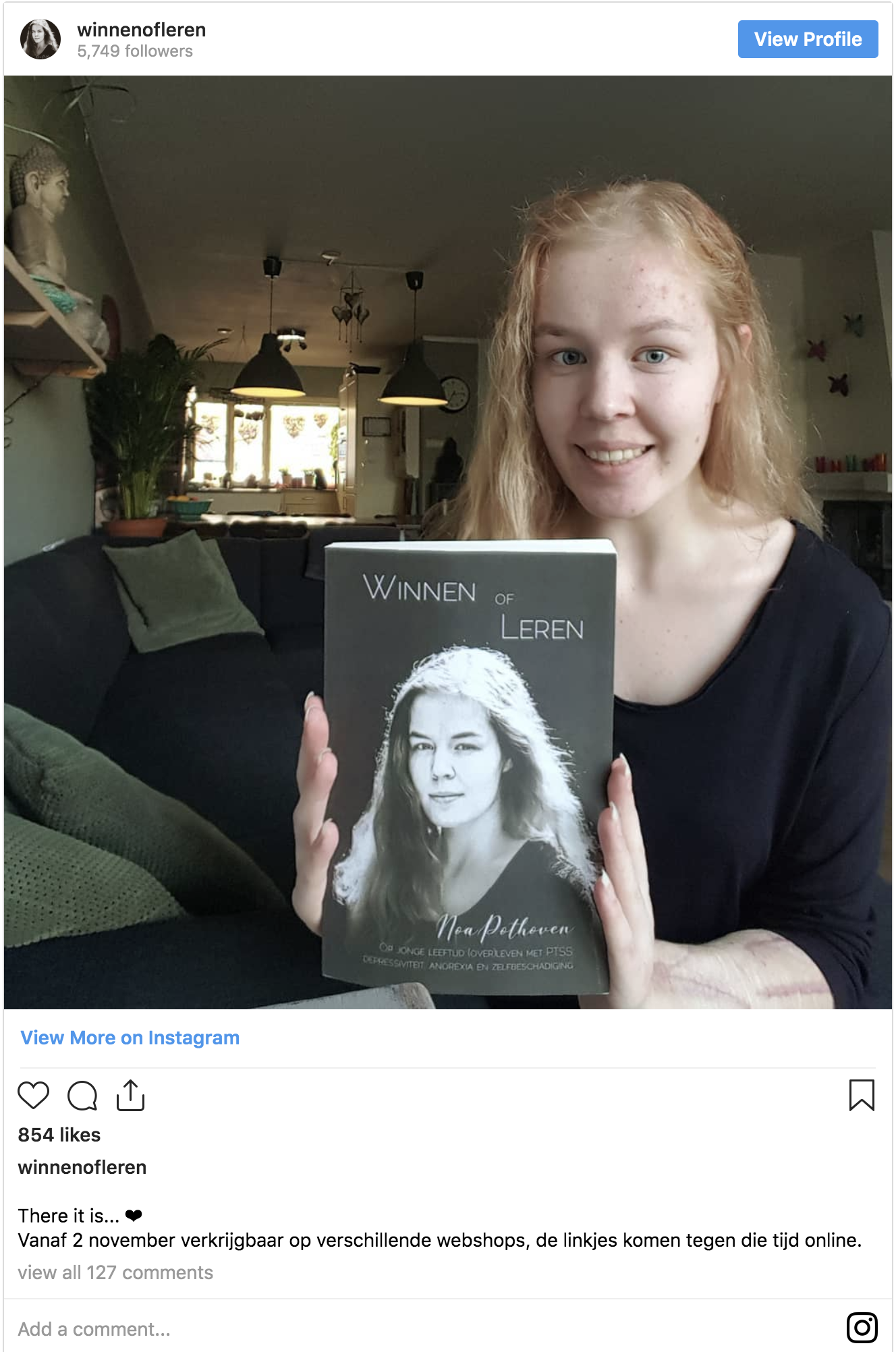 The lesson is that even the mainstream press will hop on a story without proper vetting. And, of course, this was all over social media, reported as legal euthanasia with Pothoven being killed via medical intervention. That doesn’t seem to be the case, and though there’s a chance that I’m wrong and that she was euthanized, I would bet lots of money that the report of refusal to eat or drink is correct.

Reporters are simply not doing their job these days, and it’s even worse because, when I checked some of the sources above, none had retracted their claims of euthanasia or even cast then in doubt like the Post did. Such is the sensationalism of the word “euthanasia”, and the hunger for clicks by even reputable journalistic sites, that proper vetting wasn’t done.  This misreporting is itself a story, but will you see that anywhere?

But there’s room for debate in the comments: do you think euthanasia should ever be allowed for those suffering from mental illness? And feel free to give your own take on when (if ever) euthanasia should be legal.

77 thoughts on “Mainstream and social media report that a depressed Dutch rape victim was legally euthanized. They were all wrong.”