My contretemps in the pages of Quillette continues with the psychobiologist John Staddon. I hope this is the end of it, as it’s no fun to write what I’ve written many times before to criticize a man who’s repeating old and tedious arguments that have been rebutted many times before. But so great is Staddon’s animus against atheism that he simply can’t learn.

As you may recall, Staddon originally wrote a piece in Quillette called “Is secular humanism a religion?” His answer was “yes,” even though his own concept of religion didn’t fit secular humanism in two of its three defining characteristics. But his main point was that secular humanism is religious because it has a morality—a morality that, as a conservative, he considered odious. (One of the supposedly repugnant aspects of secular morality was gay marriage.) He also argued that, like religion, secular humanism has “blasphemy rules,” like the criticism of those who wear blackface. That’s what’s known as “straining to support your argument”, and it causes mental hernias.

Well, I couldn’t let his piece stand, and so wrote a substantial reply, “Secular humanism is not a religion.” I won’t reiterate it here, as you can read it at the link or read about it on my website (here and here).

Staddon was apparently peeved that I didn’t swallow his half-digested pabulum, and so wrote a response to me called “Values, even secular ones, depend on faith: A reply to Jerry Coyne” (you can read my note about it here, which didn’t give a rebuttal because I knew I’d write one for Quillette). In this response, without admitting it, he retracts his original claim that secular humanism is a religion. He first argues that he didn’t choose the title (and that may have been true), but neglects to add that the very first sentence of his first piece, a sentence that he surely wrote himself, was this:

It is now a rather old story: secular humanism is a religion.

Oh well, let the readers be deceived. But he went on to claim that well, maybe secular humanism and its morality really isn’t religious, but they do have religious aspects: they’re based on faith. As Staddon said,

My argument is simple: religions have three characteristics: spiritual, mythical/historical, and moral. Secular humanism lacks the first two and is often quite critical of these aspects of religion. But they are largely irrelevant to politics. Hence the truth or falsity of religious myths is also irrelevant, as are Coyne’s disproofs of the existence of God. The fact that religious morals are derived from religious stories—myths in Mr. Coyne’s book—does not make them any more dismissible than Mr. Coyne’s morals, which are connected to nothing at all. In his own agnostic terms, all are matters of faith.

I couldn’t let that stand, either, as “faith” means something very different in secular humanistic ethics and religious ethics. And the claim that secular morality is based on “nothing at all” is completely stupid.

I explain the difference in the construals of “faith” in my article, while noting that, at bottom, any ethical system is based on “preferences”. In religion it’s for following the dictates of your particular sect, while in humanism it’s usually based on what kind of world you’d like to see and inhabit. There can be no claim that this and that morality is “objective and scientific” as all are grounded on preferences. (Some differ from me: Sam Harris and Derek Parfit, for instance, think that we can construct a perfectly objective morality.)

But I’m getting ahead of myself. You can read my response by clicking on the screenshot below.  And thanks to Rebecca Goldstein for discussing the issues with me; one can have no better critic. 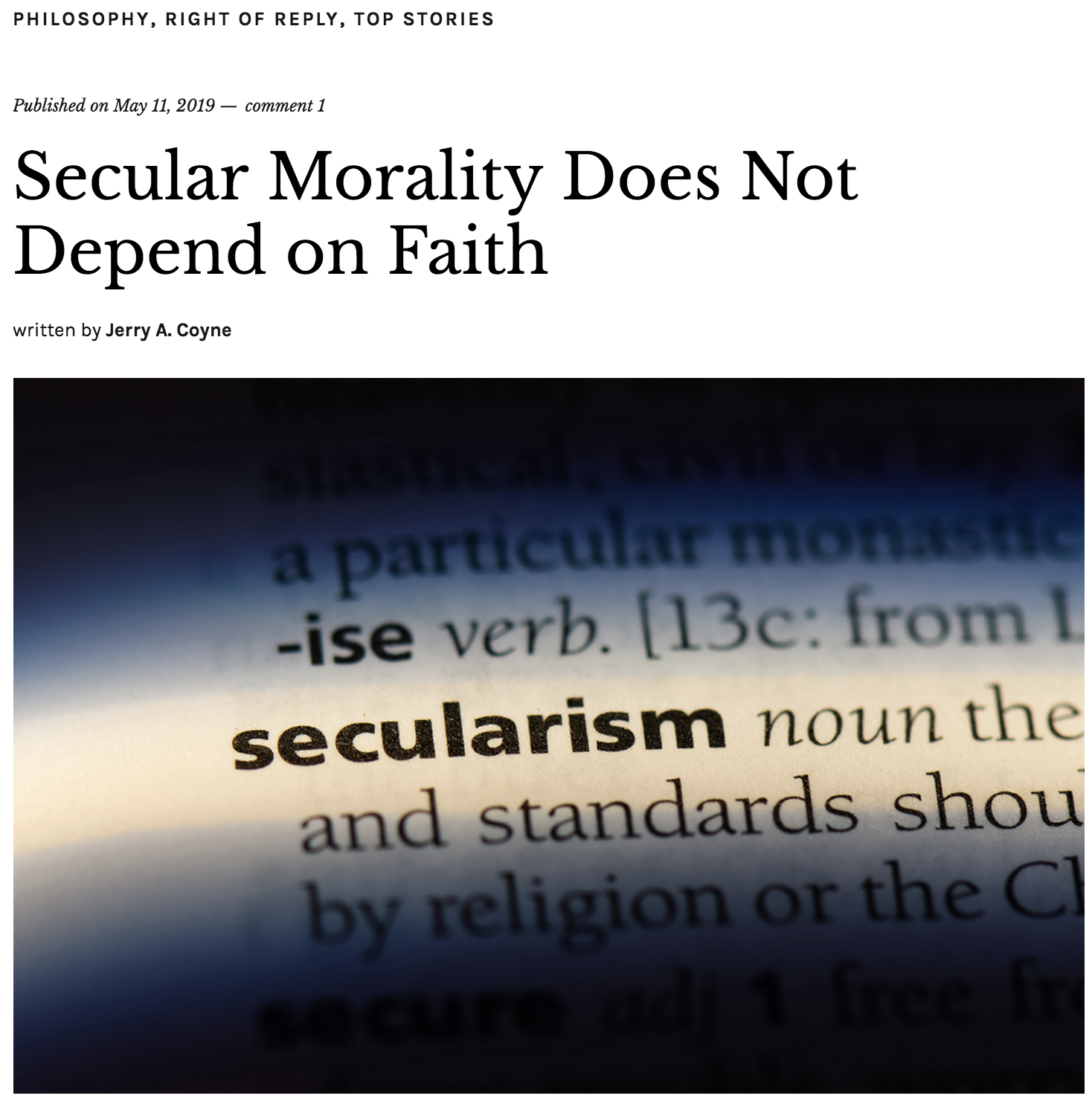 As I found before, the commenters on my piece, already active, are disappointingly unthoughtful.

35 thoughts on “My newest piece in Quillette: Another response to John Staddon”