I couldn’t resist a HuffPo clickbaity title. Forgive me.

This story was on many right-wing websites yesterday, but I refrained from posting about it (though I shouldn’t have to given the copious documentation). Now, however, the New York Times has picked the story up, and also reported a fillip: House Speaker Nancy Pelosi has spanked Ilhan Omar for Omar’s antisemitism.

You can read the article below. In short, the brand-new Congresswoman Omar has a history of antisemitic statements and tweets, including supporting the Boycott, Divestment, Sanctions movement and issuing tweets like this (I believe she deleted it after an uproar): 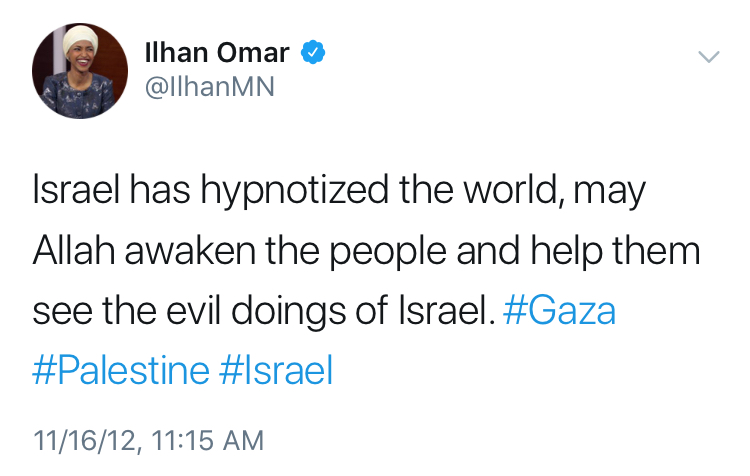 I believe, but don’t know for sure, that Omar—and perhaps her colleague Rashida Tlaib—are not just Muslims but Islamists, dedicated to spreading their faith more widely.

Regardless, see this NYT article for more criticisms, but also for the claim (on February 1) that Democratic leaders were still standing by Omar as well as Tlaib, who not only favors BDS but the genocidal “one state solution”.

Here’s Omar, in response to a tweet by the odious Glenn Greenwald, saying that Republicans defend Israel (and criticize Omar) only because they’re being paid off by those usurious Jews (“Benjamins” are $100 bills, bearing the likeness of Benjamin Franklin):

When Omar was asked exactly which Jews were paying off Republicans, she gave this response:

Well, AIPAC is the American Israel Public Affairs Committee, and as the New York Times notes, “Aipac does not contribute to political campaigns, but its large-scale conferences and congressional trips to Israel have long drawn enthusiastic and bipartisan participation.”

Even Chelsea Clinton clapped back at Omar (LOL) for this:

Please learn how to talk about Jews in a non-anti-Semitic way. Sincerely, American Jews. https://t.co/qo3BU2Pqgn

Co-signed as an American. We should expect all elected officials, regardless of party, and all public figures to not traffic in anti-Semitism.

As is so often the case with the “progressive” anti-semites, though, Omar blamed the fracas on the GOP: it was a right-wing smear:

👋🏽 Chelsea – I would be happy to talk. We must call out smears from the GOP and their allies. And I believe we can do that without criticizing people for their faith.

I look forward to building an inclusive movement for justice with you. 💪🏽 https://t.co/EGA9NQfBCi

All this became too much for the Democratic leadership, and, one by one, Democrats have been calling out Omar for her hateful views. Today five house Democratic leaders issued the statement below, tweeted by Pelosi after she had a “conversation” with Omar. I can only imagine how that trip to the woodshed went, but the statement below stands by itself as an explicit indictment of Omar’s anti-semitism.

In our conversation today, Congresswoman Omar and I agreed that we must use this moment to move forward as we reject anti-Semitism in all forms. https://t.co/UpZA3DNgQs pic.twitter.com/1Z6rH65e3M

As the Times wrote:

. . . what distinguished the events of Sunday and Monday from earlier controversies around Ms. Omar was the willingness of Democrats to join in.

Ms. Omar had been trying to distance herself from a 2012 comment on Twitter in which she said Israel had been hypnotizing the world to look past its actions in Gaza. She expressed regret for trafficking in an anti-Semitic trope, which she said was unwitting. And she had reached out to Jewish Democrats to make amends.

But her latest comments made some question the authenticity of her contrition.

Let us be clear here: Omar was never contrite. Nor are Tlaib or Ocasio-Cortez. They’ll simply keep a low profile for now, as their power in their own party (and their re-electability) will be compromised if they continue going after the Jews.

Yet these young progressives are simply sharing the sentiments of their progressive peers that Israel is a monster compared with Palestine, that BDS is a good way to go after Israel, and that we really need that one-state solution, which of course will eliminate Israel after a lot of killing. This is what you get when you ignore the bigotry of the Democratic Socialists.

It’s ironic, but completely understandable, that “congresswomen of color”, who should be dedicated to inclusivity, have decided to exclude the one group that has been scapegoated for millennia: the Jews. Yes, Omar et al. are going to mute themselves (if they’re able to!), but they will not change where they stand.

People have been urging these three Congresswomen to restrain themselves on other fronts, saying that they need to cut back a bit on their unrealistic desire to transform America instantly. Well, I share many of their goals, including higher taxes on the wealthy, an increase in capital gains taxes, universal medical care, and a serious effort to cut the usage of fossil fuels and stem global warming.

Yes, they need to proceed a bit slowly there, as that transformation is not going to happen overnight. But what they can do now is to stop dissing the Jews.

I have three responses:

1.) This is NOT a real apology; it’s the usual palaver that “my intention is not to offend Jews” and such. Well, maybe it wasn’t her intention to offend, but it was her intention to do down the Jews. And it’s not an apology that recognizes the offensive nature of her remarks; it simply says, “You’ve misconstrued my intent.”

2.) Omar didn’t apologize but says she is “listening and learning”. What that means, I suspect is that she’s learning how to be antisemitic in a more subtle way.

3.) But note as well the lists of lobbyists who are “problematic”, lumping AIPAC with the NRA. Fine, but where are CAIR and the other Muslim lobbying groups? Are they not “problematic” too?

Coda: Chelsea Clinton got attacked for using the phrase “as an American” above, which apparently shows her “white fragility.” The Nazi-punching Dan Arel also makes a guest appearance as the Antifa Retweeter (h/t: Grania): 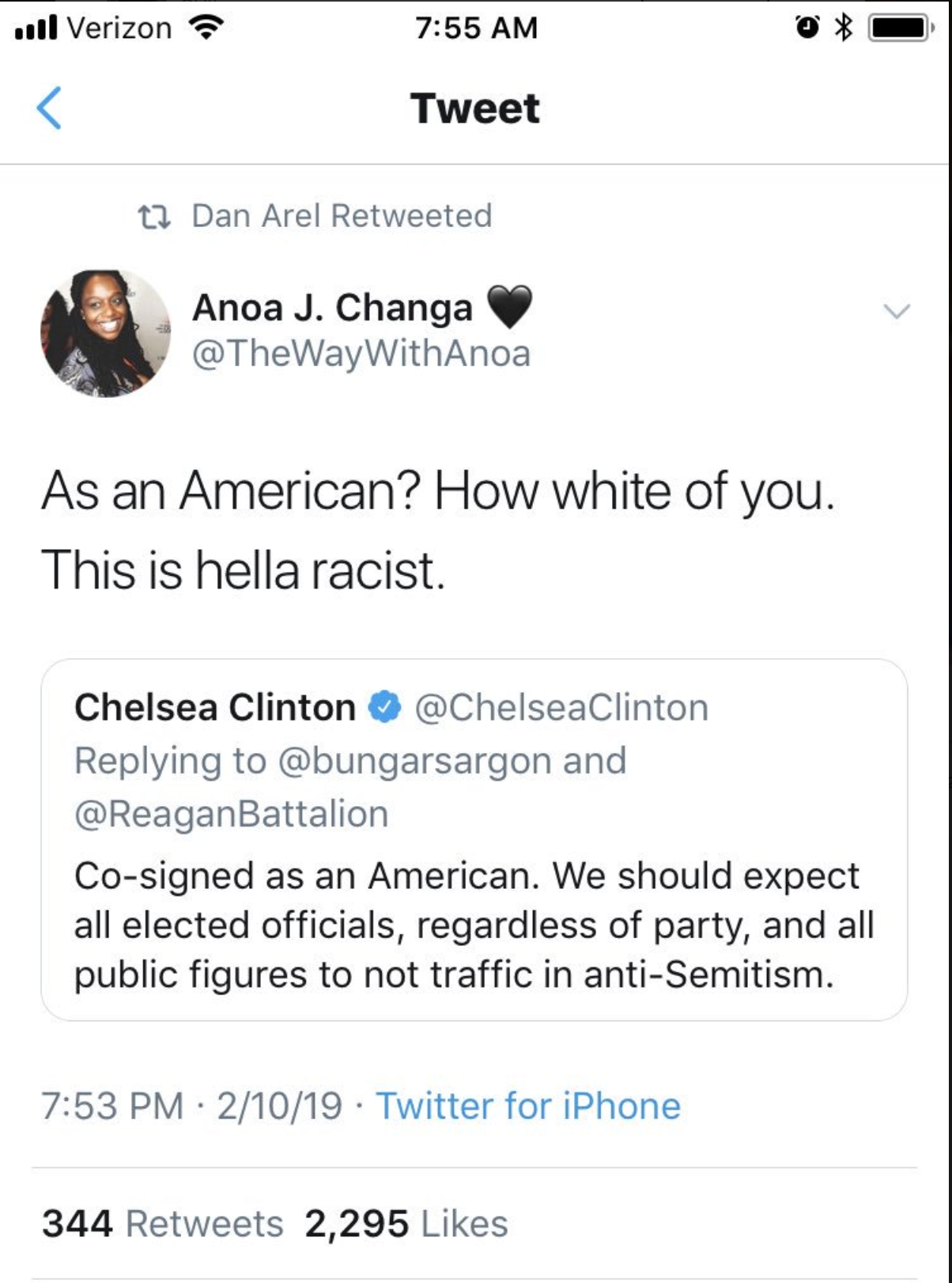 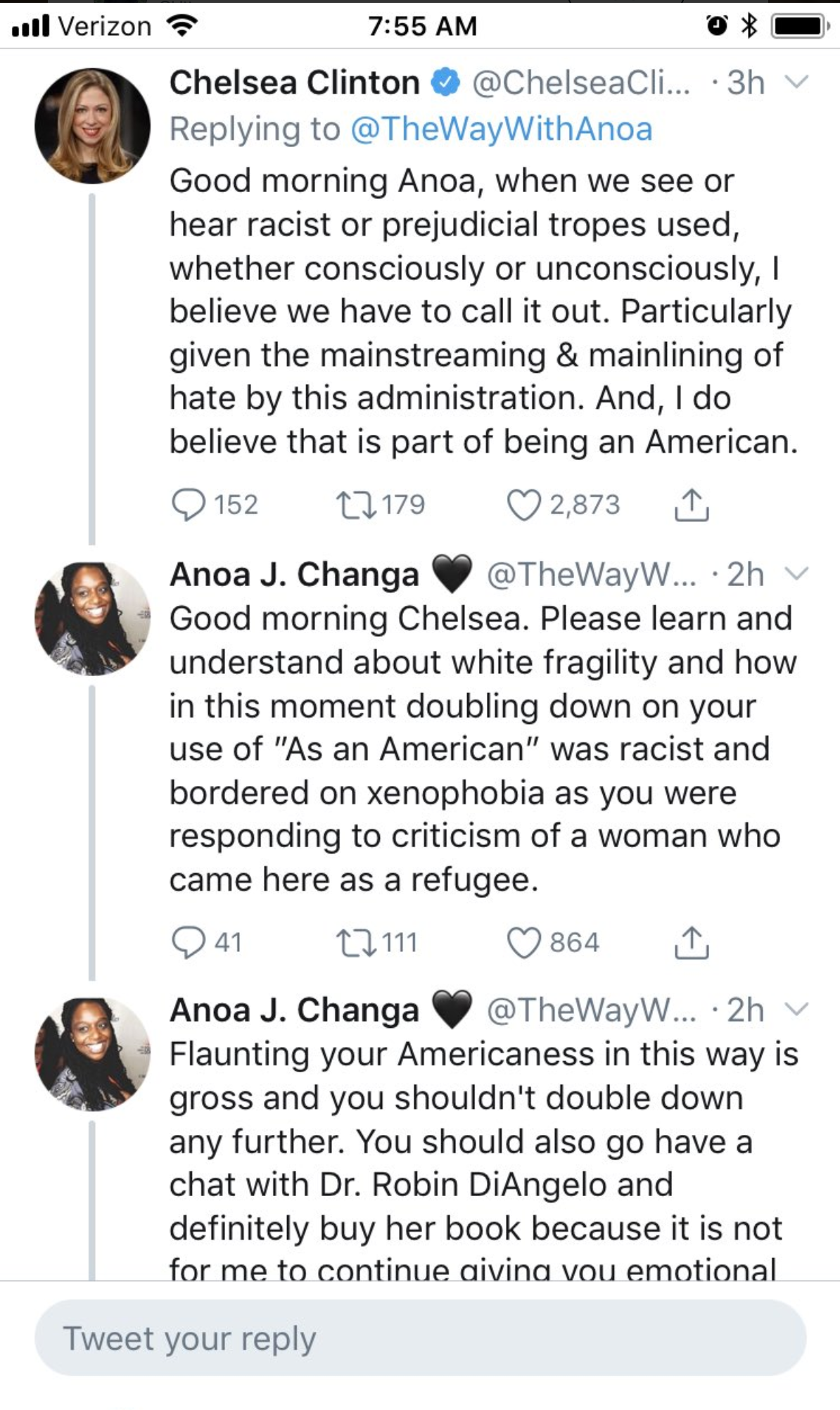 90 thoughts on “Democrats throw shade on Ilhan Omar for antisemitism”