You may be aware of Titania McGrath, apparently the reincarnation of Godfrey Elfwick. Both Titania and Godfrey trolled the Authoritarian Left by pretending to be social justice warriors and mocking the extremes of that ideology. In fact, both Titania and Godfrey were so convincing that their tweets were taken seriously by some SJWs, and non-SJW liberals like Sam Harris.

As we know, there’s no distance between reality and satire when you’re dealing with the Authoritarian Left. When they start calling out General Tso’s Chicken (not even a real Chinese dish) for being inappropriately cooked and a case of cultural appropriation, then you know you’ve entered the twilight zone. And so there was a gaping niche that Godfrey and then Titania sought to fill.

After “Godfrey” published a spoof piece in 2016 that fooled the Guardian, and then spewed a bunch of tweets that were considered offensive (as I said, there’s no humor on the Regressive Left), he was finally banned by Twitter last year.

After a period of quiescence, however, an Elfwick clone appeared in the form of the magnificent Titania McGrath (see his/her/their/zir/its Twitter feed).  Here are a few of Titania’s recent tweets:

Titania was notable for his/her/their/zir/its poetry, and produced some magnificent specimens of lyrical and appropriately angry Social Justice Poems. Here’s one: 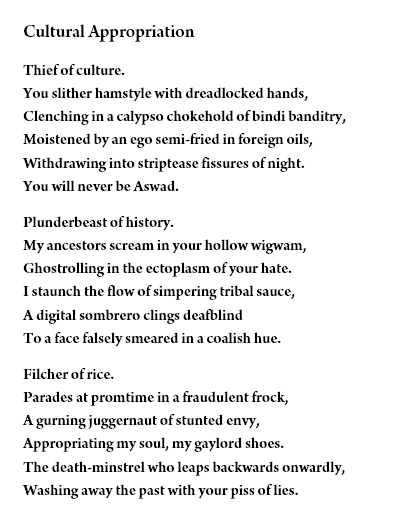 But then Titania was also banned from Twitter. It didn’t last long:

And her reappearance on Twitter was celebrated in the Spectator by none other than. . . Godfrey Elfwick! (Click on screenshot). Clearly, the Spectator is in on the joke.

Now Claire Lehmann, who’s also in on the joke, has enlisted Titania to recount her Twitter Troubles on Quillette. It’s pure McGrath, as you can tell from the title (click on screenshot):

If you’re not familiar with hir, here’s how it begins:

My name is Titania McGrath. I am a radical intersectionalist poet committed to feminism, social justice, and armed peaceful protest. In April of this year, I decided to become more industrious on social media. I was inspired by other activists who had made use of their online platforms in order to spread their message and explain to people why they are wrong about everything.

This week the powers-that-be at Twitter hit my account with a “permanent suspension” (a semantic contradiction, but then I suppose bigots aren’t known for their grammatical prowess). This was the latest in a series of suspensions, all of which were imposed because I had been too woke. The final straw appeared to be a tweet in which I informed my followers that I would be attending a pro-Brexit march so that I could punch a few UKIP supporters in the name of tolerance.

Unfortunately, those who fight for the progressive cause are continually bombarded by alt-right trolls who like to engage in a form of harassment known as “debate.” Only a few days before my suspension, a misogynist referred to me as “shrill and humourless.”  As I was quick to point out, humour is a patriarchal construct. This is why it has been so gratifying to see the success of our current wave of feminist comedians, those brave women who are subverting the genre by ensuring that it doesn’t make anyone laugh.

Do not pity me. As a woman in a heteronormative patriarchal world I am accustomed to males like Jack Dorsey attempting to keep me silent. In my absence from Twitter, I took the opportunity to spend some time at a resort in Val d’Isère, where I could relax and contemplate my oppression. I even managed to write a book which I have entitled Woke: A Guide to Social Justice. I did want to call it My Struggle, but that title was already taken apparently.

I am a healer, a weaver of dreams. I have been put on this earth to defend minorities and fight for social justice. My work is not about ego. It is so much bigger than me. So please make sure you spread the word about my new book so that as many copies as possible can be sold.

Titania is a breath of fresh air in the toxic atmosphere produced by entitled Leftists.  And now, it seems (and only seems, as this may be another joke), that Ms./Mr./Womnyx McGrath has a book in the offing. He/she/zir/its announces it below, and it’s even listed on Amazon UK, scheduled for release in early March of next year (details, of course, are very scanty). Is it for real? Who knows? But it should be required summer reading for all students who are about to start college.

80 thoughts on “Titiania McGrath suspended from Twitter, then returns in glory and defiance”