It’s Sunday, October 28, 2018, and National Chocolate Day. I expect that at least 30% of the readers (with me among them) will be paying homage to this most delicious plant product. It’s also International Animation Day, so let’s see an old one. Cartoons aren’t what they used to be, as the YouTube notes suggest about this 1931 classic, based on a jazz song with a long history.

In the Betty Boop short film “Snow White”, Koko the Clown (voiced by Cab Calloway) sings “St. James Infirmary Blues” when he believes Betty Boop is dead. Cab Calloway’s voice is unique and specially eerie for this song. Koko’s dancing during the “St. James” number is rotoscoped from footage of Calloway.

Freaky, eh? What would today’s kids think of that one?

Here’s a tweet, sent by both Jiten and Matthew, that gets pride of place for Tweet of the Month. Yes, it is a cat.

This picture of a crow is interesting because…it's actually a cat pic.twitter.com/dWqdnSL4KD

Lots happened on this day in history. in 1420, Beijing was officially designated the capital of the Ming Dynasty, with the Forbidden City completed in that year. On October 28, 1492, Christopher Columbus landed in Cuba during his first voyage across the Atlantic.  Here’s his route before he went back home (on none of his four voyages did he land on mainland North America): 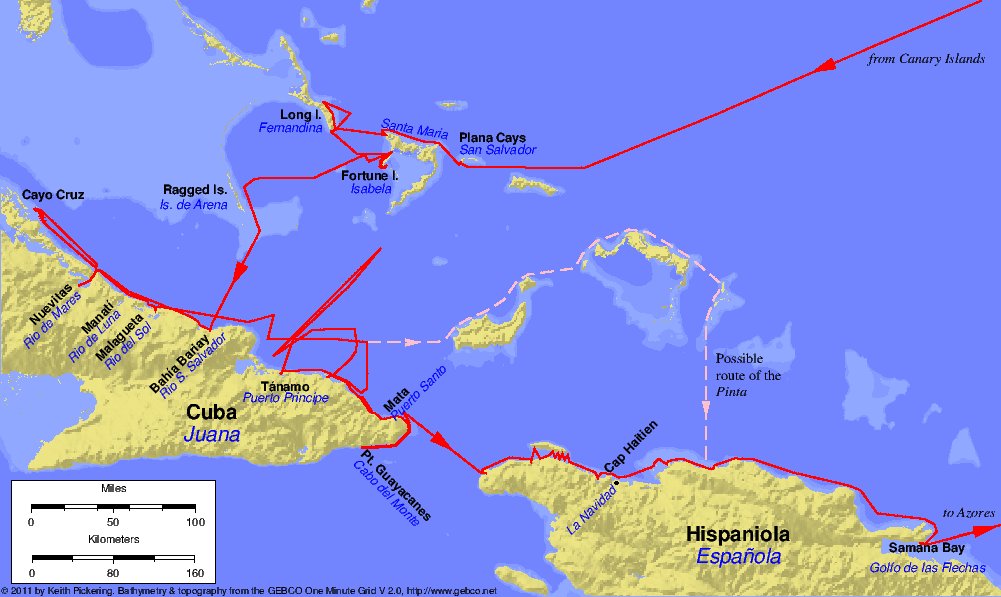 On this day in 1636, a vote of the court of the Massachusetts Bay Colony established the first college in what would become the U.S.: Harvard University. Exactly 250 years later, Grover Cleveland dedicated the Statue of Liberty (a gift from the people of France) in New York Harbor. It was also on that day in 1886 that workers threw ticker tape into the streets in celebration, starting the first “ticker tape parade”. That, of course, is passé, as ticker tape no longer exists. On October 28, 1919, Congress passed the Volstead Act over President Woodrow Wilson’s veto, creating “Prohibition” that began in January, 1920, and lasted for 13 years. No booze!!! According to Wikipedia, it was on this day in 1948 that “Paul Müller [was] awarded the Nobel Prize in Physiology or Medicine for his discovery of the insecticidal properties of DDT.”

And in 1956, Elvis Presley got a polio shot on national television, which, it’s said, raised immunization levels in the U.S. from 0.6% to 80% in just six months. Don’t ever say that Elvis didn’t do anything good! Here’s a fascinating 7-minute video, produced by the University of Cambridge, about how vaccination was promoted in the U.S. Elvis’s bit begins 8 seconds in, but watch the whole thing. I’m old enough to remember when polio was a huge scare, and we were told not to go to public swimming pools lest we get infected.

On this day in 1962, the Cuban Missile Crisis ended when Nikita Khrushchev ordered that Soviet missiles be removed from Cuba. Finally, on October 28, 1965, the Nostra aetate, the “Declaration on the Relation of the Church with Non-Christian Religions” of the Second Vatican Council, was proclaimed by Pope Paul VI, absolving the the Jews of responsibility for the death of Jesus, reversing Innocent III’s 760-year-old declaration. Thanks, Pope!

Meanwhile in Dobrzyn, Hili’s dialogues have become so arcane that not even Malgorzata understands them: 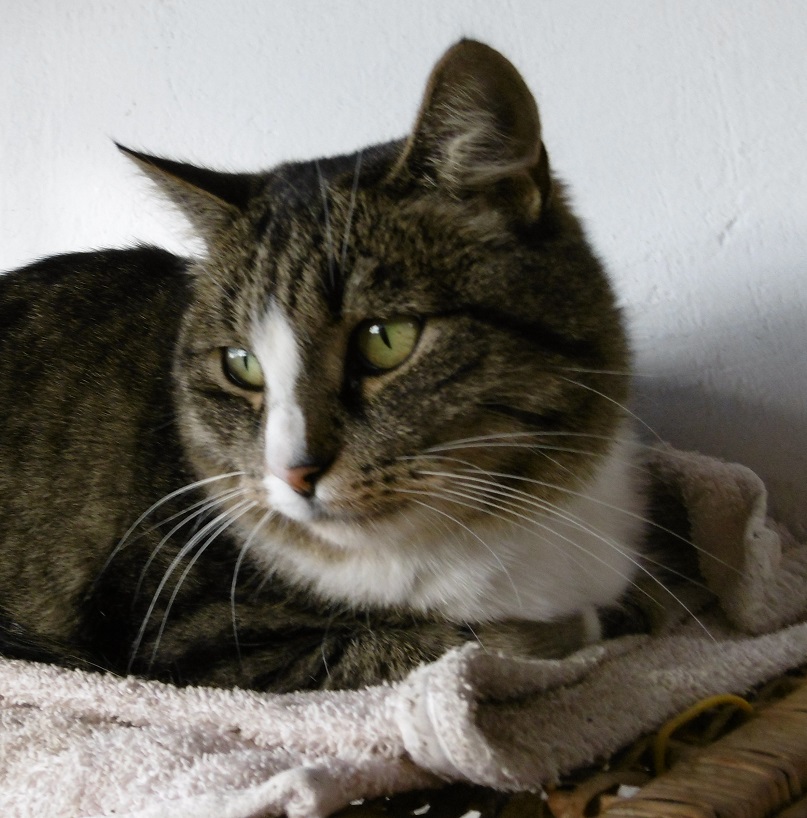 Tweets sent by Grania. The first one is cow love, but I think an otter or duck cuddle would trump a cow cuddle.

The tweet below refers  refers to Christina Rad’s video accusation that she was groped by physicist Lawrence Krauss, and to Krauss’s counter-accusation that she made the video to enrich herself. You can find the accusation of monetization on pp. 9-10 of a 51-page document written by Krauss and sent to Arizona State University’s President to defend himself after ASU’s Dean recommended that Krauss be fired. If you want it, ask.

So Krauss is now saying I published my videos against him to make money. To this I say LOL. Those videos are not (and never were) monetized. Anybody can check this, you will see no adds, I'm getting literally 0$ revenue from the views of those videos. FYI and such. @LKrauss1

Matthew has finished his book on the history of research on the human brain. Congrats, Dr. Cobb!

I just pressed 'send' and the brain book MS is winging its way to @ejklake @ProfileBooks. Let's see what he thinks. This bastard has taken me nearly 3.5 years to write. It's not only about 18 months late, it's also about 40% overweight – 178k words in total. Urgh.

From Matthew Cobb. His first tweet is about springtails: a HUGE group of them.

And the Big Guy speaks. But I thought he was omnipotent!

If you follow adaptations derived from endosymbiosis, here’s one:

And my favorite procyonid.  These critters are fiercely smart, and this one unscrews the bottom of a bird feeder with its bottom legs!

There’s a reason they call it a catwalk. Naturally, it’s in the cat-loving city of Istanbul. But how can the models ignore that cute moggie?

Cat of the YEAR.