UPDATE: Jeong’s history of racist tweets goes way back and can be seen by following the thread on the tweet below. Her excuse that she was simply reponding to harassers can no longer stand.

One of the most disgusting spectacles on the Internet this week—besides the continuing Presidency of Donald Trump, which should be placed under a circus tent—is the way Leftists have come to the defense of Sarah Jeong, the newly named head tech writer for the New York Times who had a history of anti-white racist statements on Twitter. HuffPost, and Slate have already defended her, not even admitting that she had anything to apologize for. You can find other defenses of Jeong at various websites that purport to be progressive, including a new piece on Vox arguing that her words aren’t racist, and a similar piece on Splinter. Even Ed Yong, whom I used to respect, has come to Jeong’s defense by retweeting a defense:

Here’s a typical mushbrained defense of the right of people of color to be racist, written by Zack Beauchamp at Vox.  Here Beauchamp is arguing against the view that Jeon was serious in what she said:

To anyone who’s even passingly familiar with the way the social justice left talks, this is just clearly untrue. “White people” is a shorthand in these communities, one that’s used to capture the way that many whites still act in clueless and/or racist ways. It’s typically used satirically and hyperbolically to emphasize how white people continue to benefit (even unknowingly) from their skin color, or to point out the ways in which a power structure that favors white people continues to exist.

What a mendacious and tortuous defense! It’s right out of the pages of Orwell’s 1984. This is the nadir of progressivism, an assertion of the Left’s right to be racist because “white people” really means “the power structure is white and some members of it do racist things.” And really, in what respect was Sarah Jeong, a privileged Asian woman, oppressed and powerless? She’s a well known writer and will have even more power when she becomes an editor at the Times. She claims that she got a couple of nasty tweets, and those justified her tirade, but I’ve seen only two of them (I myself have gotten more!), and no evidence that every one of her racist tweets was a response to a troll. Finally, the way to respond to hate tweets is not to evince racism and bigotry. The hypocrisy was was compounded by the Times‘s keeping Jeong on but firing a white woman, Quinn Norton, who also had a history of odious tweets.

It has not escaped my notice that the Right has made a huge pile of hay from the Left’s defense of Jeong, calling out the Times, properly, for hypocrisy. If the Left could do anything that would push people into the Trump camp, it would be to defend a racist when Lefists are supposed to be anti-racist. This makes us look like big time hypocrites, and you can see the evidence by the crowing at the National Review, Fox News, and many other right-wing sites. The fact is that most Americans define racism as bigotry against a race, not as the social-justice way in which only white people can be racist. To most Americans not infected with extreme identity politics, tweets like these from Jeong look like simple racism:

“Dumbass fucking white people marking up the internet with their opinions like dogs pissing on fire hydrants.”

“Are white people genetically predisposed to burn faster in the sun, thus logically being only fit to live underground like groveling goblins.”

If those are “jokes,” as some of Jeong’s defenders claim, they’re not very funny.

A lonely attack on Jeong’s racism, with which I agree, was given by Andrew Sullivan in New York Magazine (click on screenshot below). But even Sullivan has been attacked for his criticism (e.g. here and here). It makes my stomach curdle to see the way the Left truckles and grovels to the Control Left, to the point of attacking those who call out racists.

Anyway, I’ll put a few of Sullivan’s quotes below in case you don’t want to read his whole piece. (If it goes behind a paywall, as Sullivan’s columns are wont to do, just write me for a copy.) 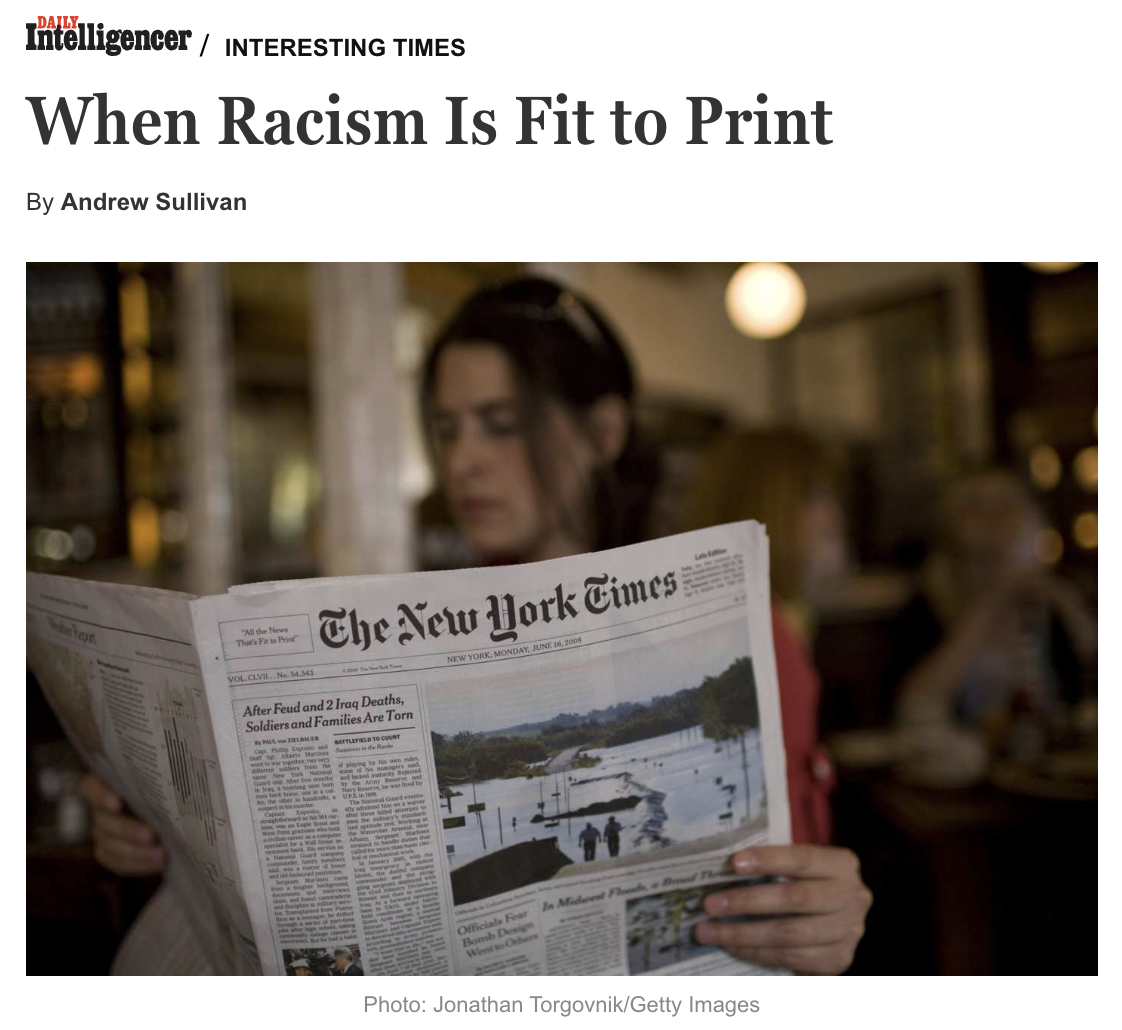 Let me add first that I’ve had public beefs with Sullivan in the past, most notably over his defense of religion, but this time he’s on the money. And I don’t think it’s because I’ve moved toward the Right. He’s moved leftwards, and the Left has moved towards insanity.

Sullivan begins by highlighting the new definition of racism:

But the alternative view — that of today’s political left — is that Jeong definitionally cannot be racist, because she’s both a woman and a racial minority. Racism against whites, in this neo-Marxist view, just “isn’t a thing” — just as misandry literally cannot exist at all. And this is because, in this paradigm, racism has nothing to do with a person’s willingness to pre-judge people by the color of their skin, or to make broad, ugly generalizations about whole groups of people, based on hoary stereotypes. Rather, racism is entirely institutional and systemic, a function of power, and therefore it can only be expressed by the powerful — i.e., primarily white, straight men. For a nonwhite female, like Sarah Jeong, it is simply impossible. In the religion of social constructionism, Jeong, by virtue of being an Asian woman, is one of the elect, incapable of the sin of racism or group prejudice. All she is doing is resisting whiteness and maleness, which indeed require resistance every second of the day.

As for the defense that Jeong was justified in being racist because she was responding to trolls, Sullivan isn’t buying it:

Let me explain why I think this is the purest of bullshit. If you want to respond to trolls by trolling them, you respond to them directly. You don’t post slurs about an entire race of people (the overwhelming majority of whom are not trolls) on an open-forum website like Twitter. And these racist tweets were not just a function of one sudden exasperated vent at a harasser; they continued for two years. Another tweet from 2016 has her exclaiming: “fuck white women lol.”

None of this excuses the behavior of the online hordes that are seeking her head. When media companies give in to those mobs, they are just feeding a voracious beast. It’s worth noting, however, that Jeong has a long record of cheering online mobs when they target people she dislikes. “Is there anything more tedious than media navel-gazing over ‘outrage mobs’?” she tweeted earlier this year.

And I don’t think the New York Times should fire her — in part because they largely share her views on race, gender, and oppression. Their entire hiring and editorial process is based on them. In their mind, Jeong was merely caught defending herself. As Vox writer Zack Beauchamp put it: “A lot of people on the internet today [are] confusing the expressive way antiracists and minorities talk about ‘white people’ with actual race-based hatred, for some unfathomable reason.” I have to say that word “expressive” made me chuckle out loud. (But would Beauchamp, I wonder, feel the same way if anti-racists talked about Jews in the same manner Jeong talks about whites? Aren’t Jews included in the category of whites?)

Finally, Sullivan has noticed, as have many, that this kind of mindless demonization of whites reflects—and may result from—what’s going on today in American colleges:

Yes, we all live on campus now. The neo-Marxist analysis of society, in which we are all mere appendages of various groups of oppressors and oppressed, and in which the oppressed definitionally cannot be at fault, is now the governing philosophy of almost all liberal media. That’s how the Washington Post can provide a platform for raw misandry, and the New York Times can hire and defend someone who expresses racial hatred. The great thing about being in the social justice movement is how liberating it can feel to give voice to incendiary, satisfying bigotry — and know that you’re still on the right side of history.

No amount of intellectual gyrations can make racism acceptable to a true progressive. For racism is simply demonizing entire groups or imputing invidious traits to them, and it’s wrong, regardless of whether those groups be blacks, Hispanics, women, Jews, or whites.

Now, two questions. First, should Jeong had been fired? Sullivan, as you can see above, doesn’t think so. Neither does Quinn Norton, who was fired by the Times for odious tweets:

I don't think @nytopinion made the right call firing me, though I understand that they panicked, and don't bear them ill-will, at all, really. But I hoped they have learned to only fire people for cause, not social media fishing for out of context tweets, & stand by @sarahjeong.

Nor does First Amendment lawyer Marc Randazza, who argues that Jeong and the Times shouldn’t even have apologized for her hate-filled racism:

Now everybody do the same.https://t.co/cKofjWW4cq

Well, yes, I think that Jeong and the paper should have apologized. As for her being fired, I don’t much care. It’s up to the Times to make that decision, and I don’t think Jeong will be tweeting racist hatred any longer. Still, it’s hypocritical for the paper to have fired Quinn Norton but not Jeong.

Second, was the Times catering to Twitter mobs by apologizing, and would they have caved even more by firing Jeong? None of us want social media pile-ons to determine people’s fate. But sometimes the Internet is right, and when they are, appropriate action should be taken. Jeong should be dealt with not because people are baying for her blood, but because they called attention to an odious aspect of her past that the paper didn’t know. (Actually, I don’t know if they were aware of it beforehand.)

The rule for progressives should be simple: demonizing entire groups of people based on ethnicity or gender, and imputing to those groups nasty characteristics, is wrong. It’s divisive and it foments hatred. It is not good for society. And as our President and his minions proceed to do just that, it’s up to us to fight it, not to excuse other people’s bigotry because they aren’t white. To do that is just going along with the Right as well as making it more likely that they’ll continue to have power in our country.

183 thoughts on “The Sarah Jeong affair: more defense of her racism”