First, a report from Jacques Hausser in Switzerland:

Nice eclipse tonight (in Eurasia and Africa), the moon with a very luminous Mars (Mars is a bit hazy here.Five minutes later, clouds did hide everything…)

You can read more about the eclipse at timeanddate.com; it was visible from Australia, Africa, Europe, Asia, and South America, but not North America.  As the site notes, “Totality will last for 103 minutes, making it the longest eclipse of the 21st century.” Did anyone see it beside Jacques? 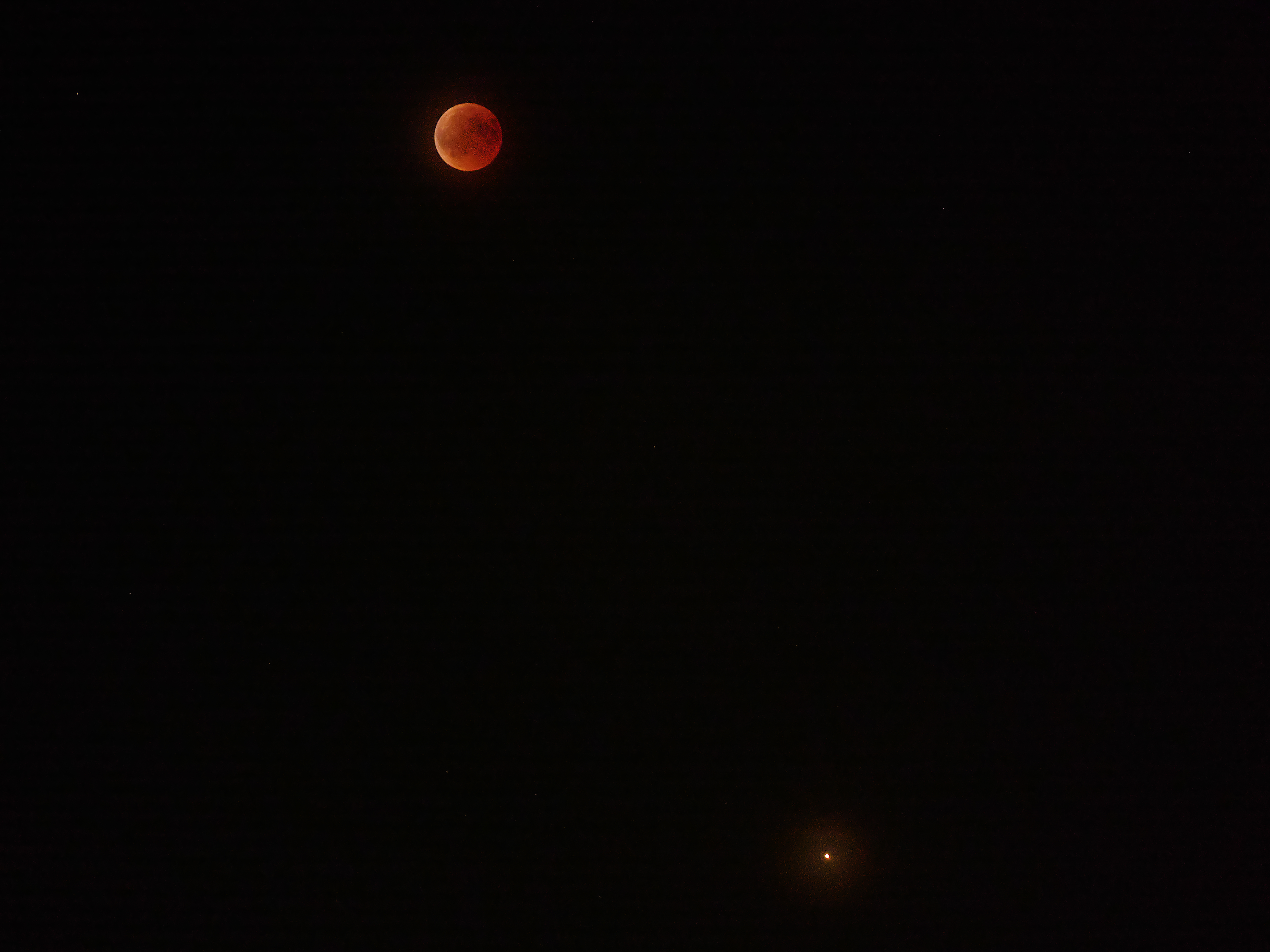 Where I walk my dog there is a stormwater collection pond, shown in the first picture, that has a decent population of bird life. whenever I walk by the gravel patch in the foreground of the picture these two killdeer ( Charadrius vociferus) get all excited. So yesterday I as approached, I looked to see if I could spot the nest. The second picture shows the nest with 4 eggs in the gravel. The third picture is a bit blurry because the bird was moving but this is their “broken wing” act trying to distract me from the nest. The two birds put a great deal of effort into luring me down the path away from the nest. The nest site is circled in the first photo: 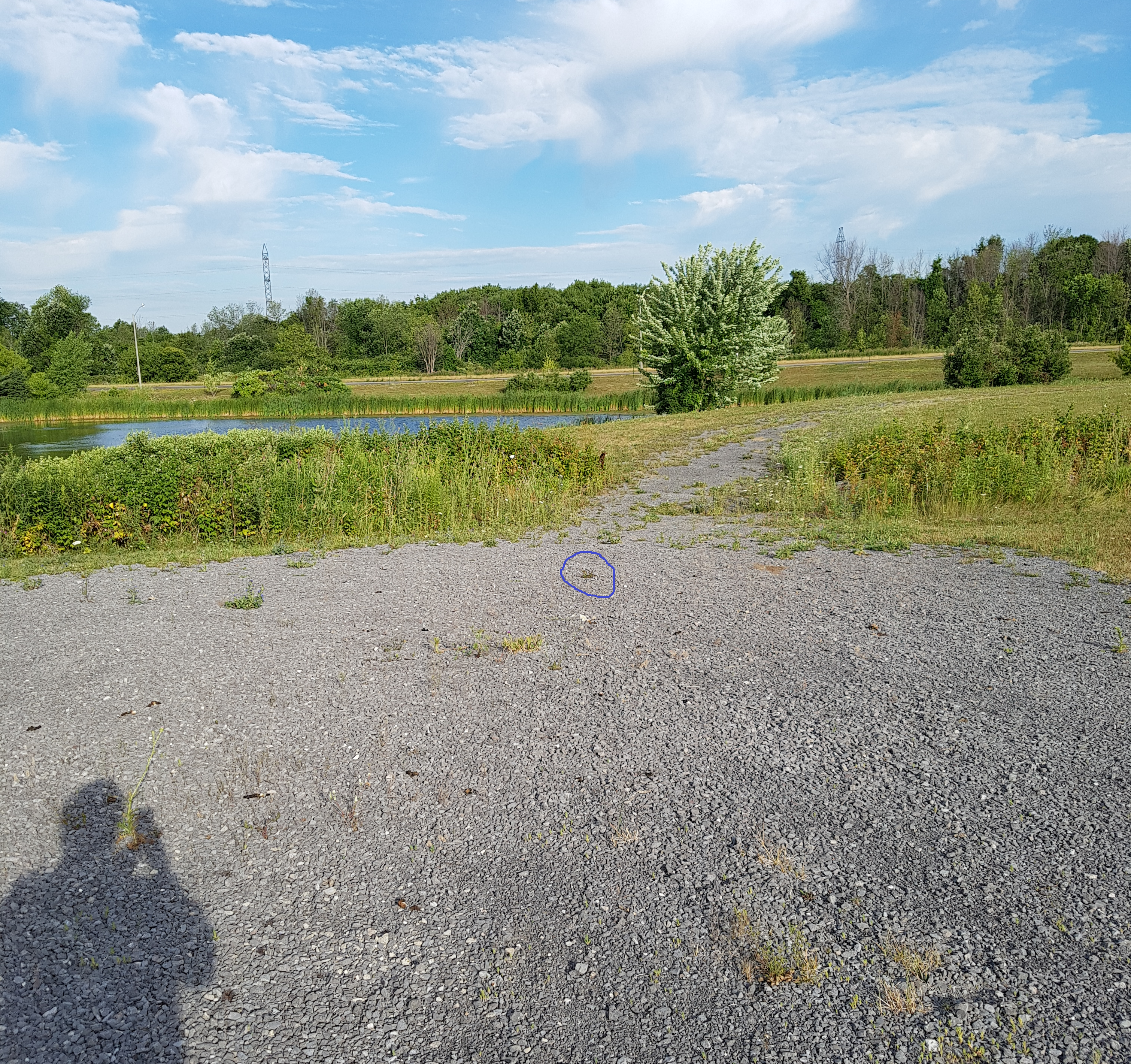 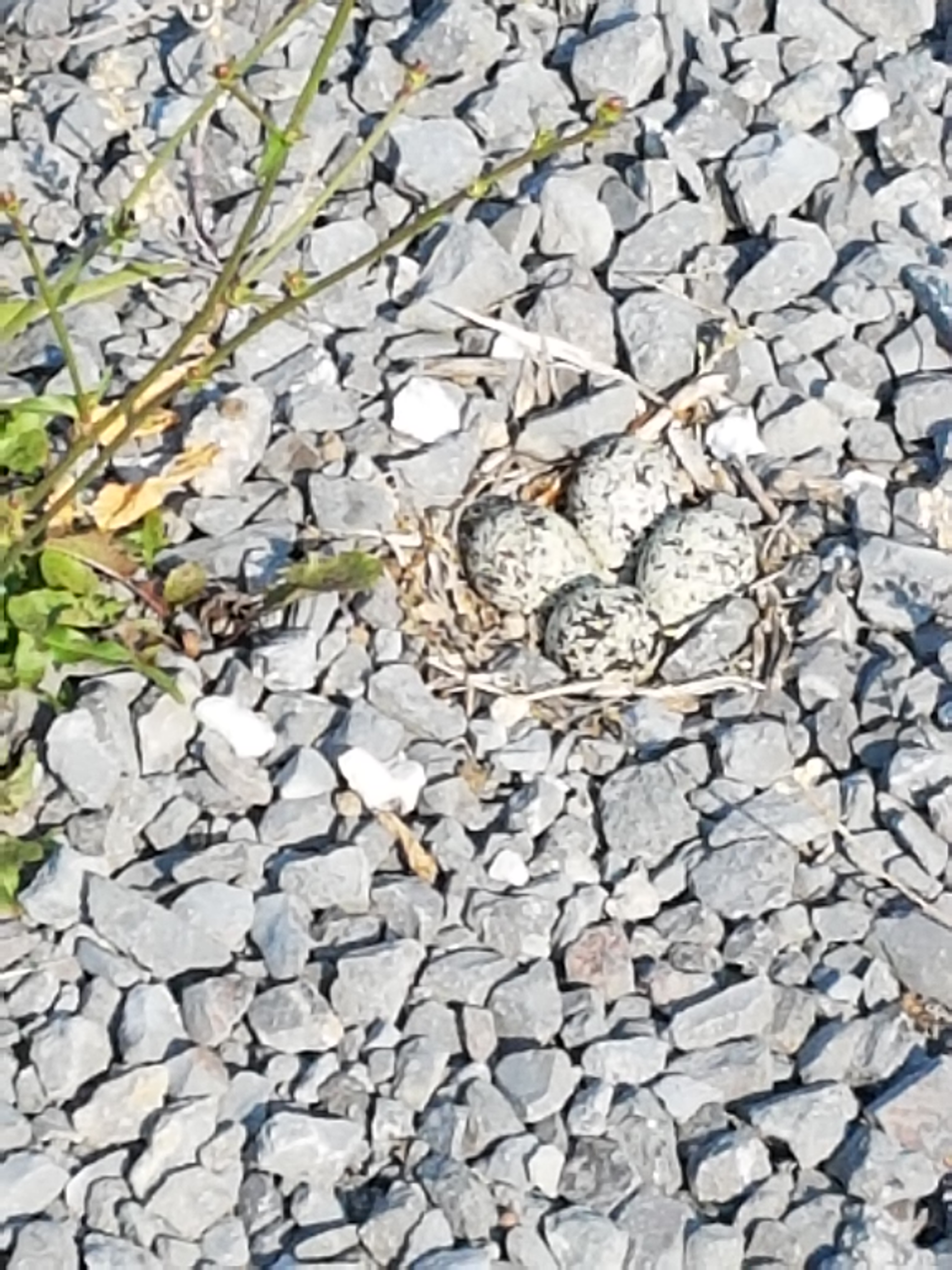 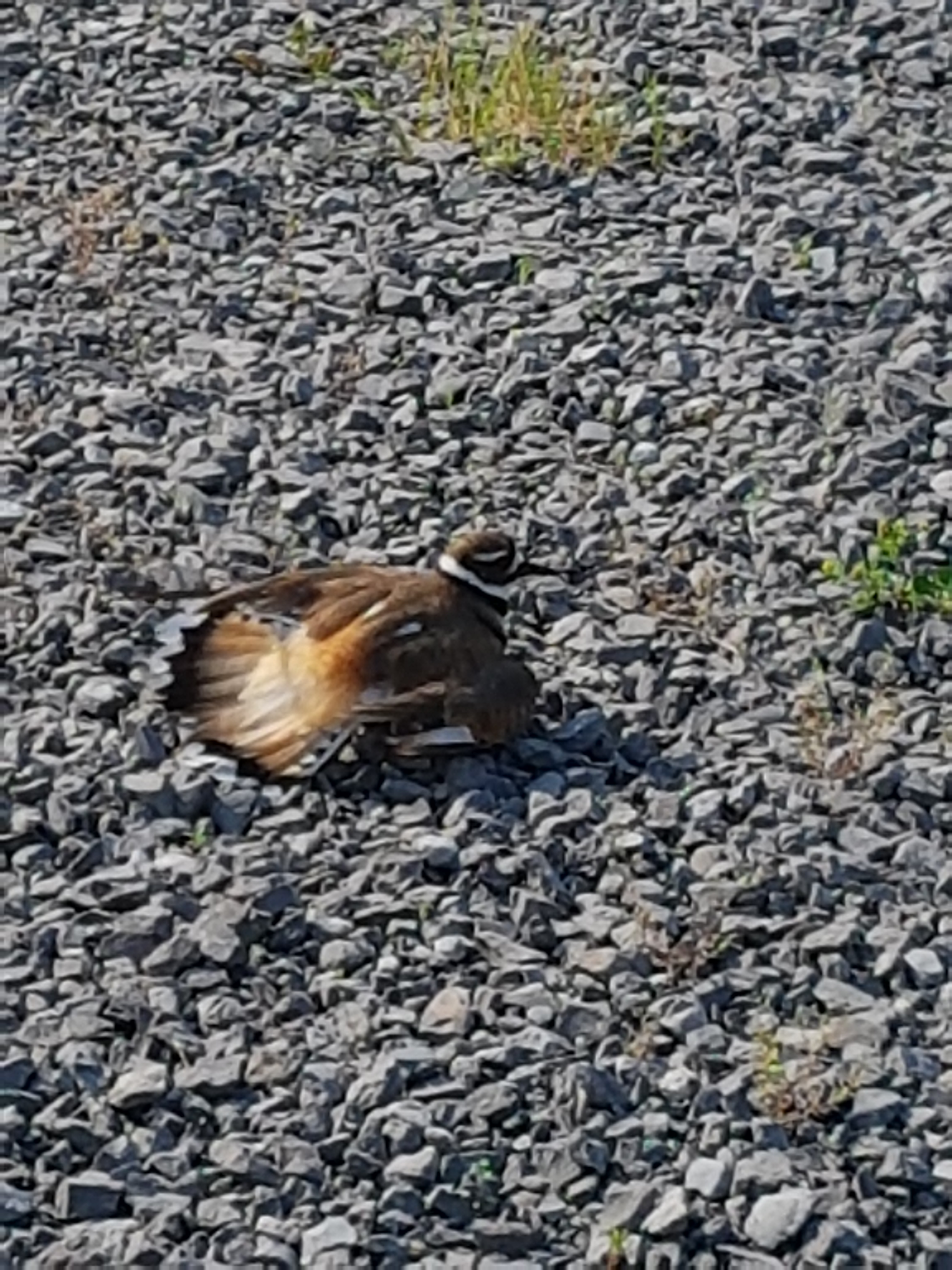 Reader Robert Jase has befriended some raccoons (Procyon lotor, both adults and kits) as well as a family of striped skunks (Mephitis mephitis). His notes are indented:

More pics of my wild friends. First off my cat Boo checks out Speck; the cats have lots of respect for the wild critters.  There are two skunk kits but they don’t come to the house so no pics of them as yet. 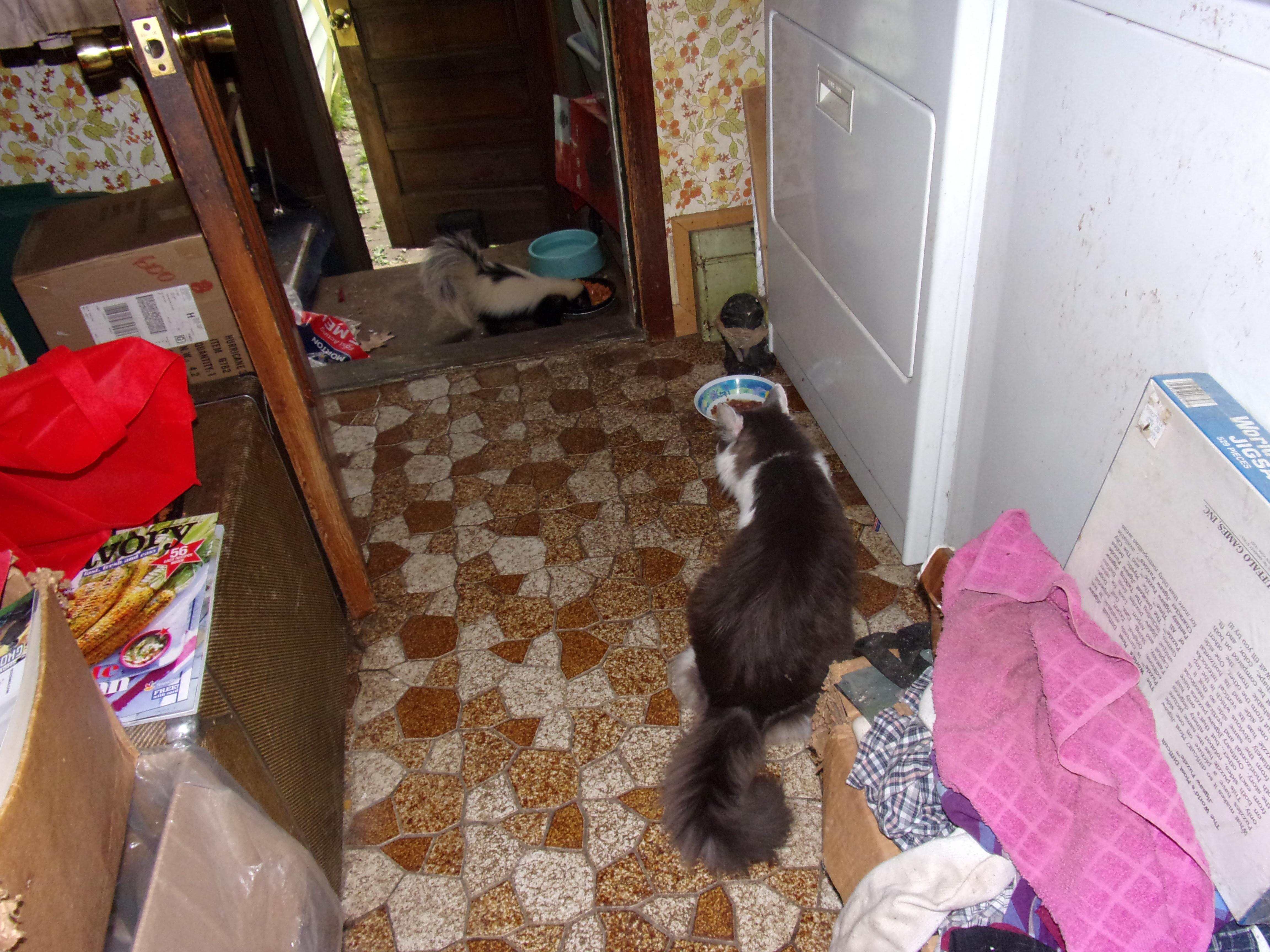 Next is Rackets with one of her kits. 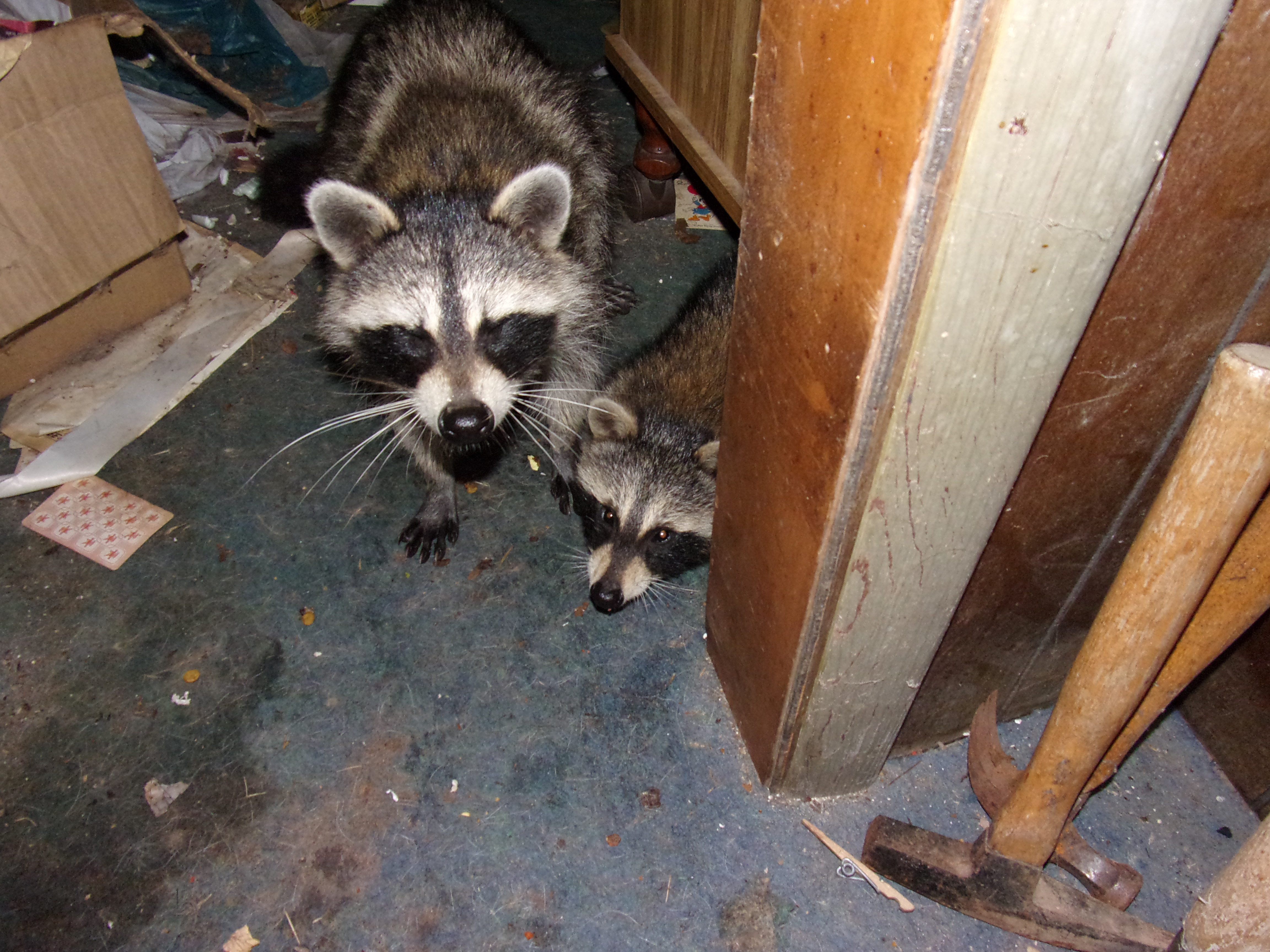 Third, there is one kit that just loves hiding under the stepstool and sneaking food from the dish. 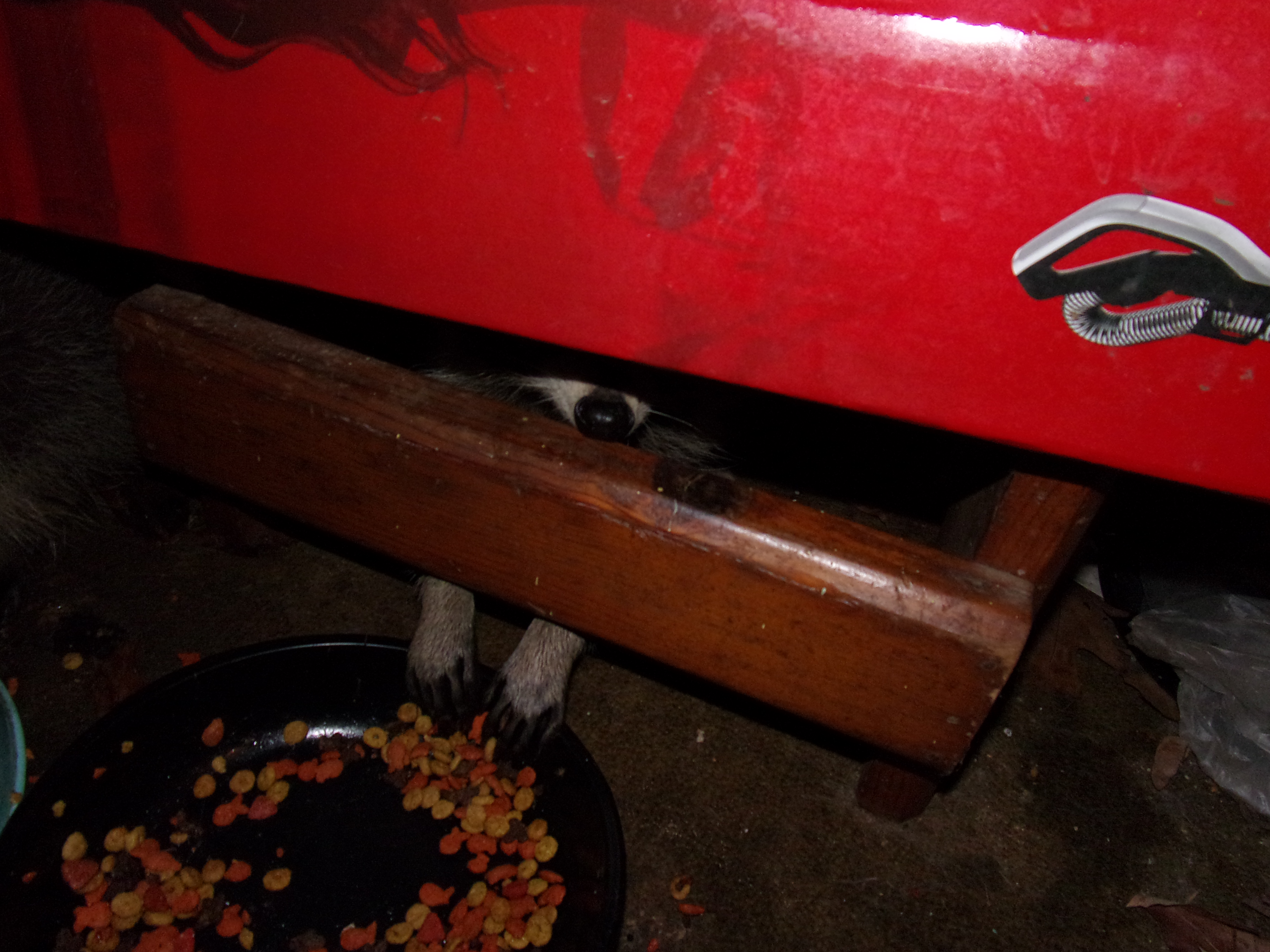 They really are very plush! 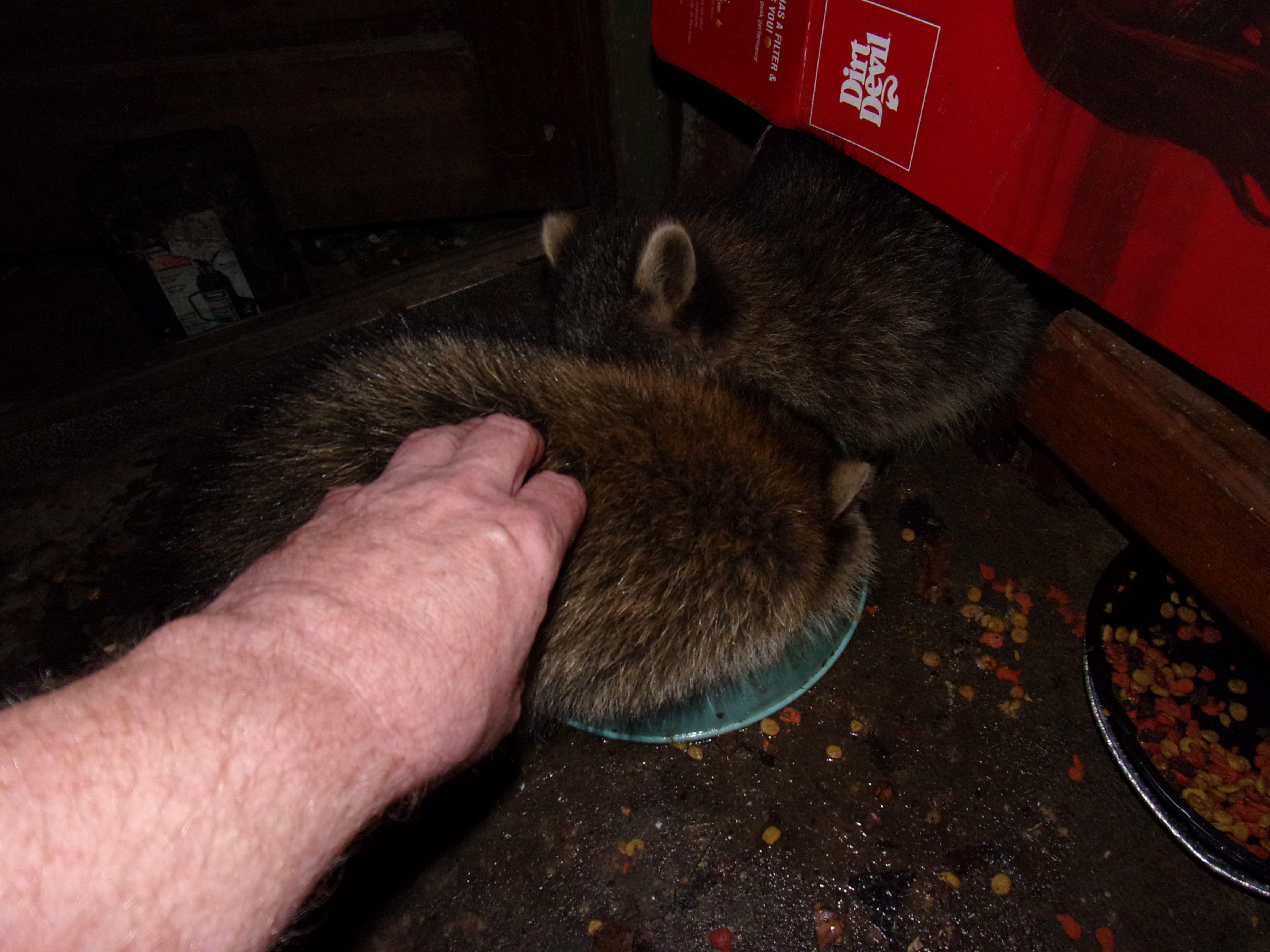 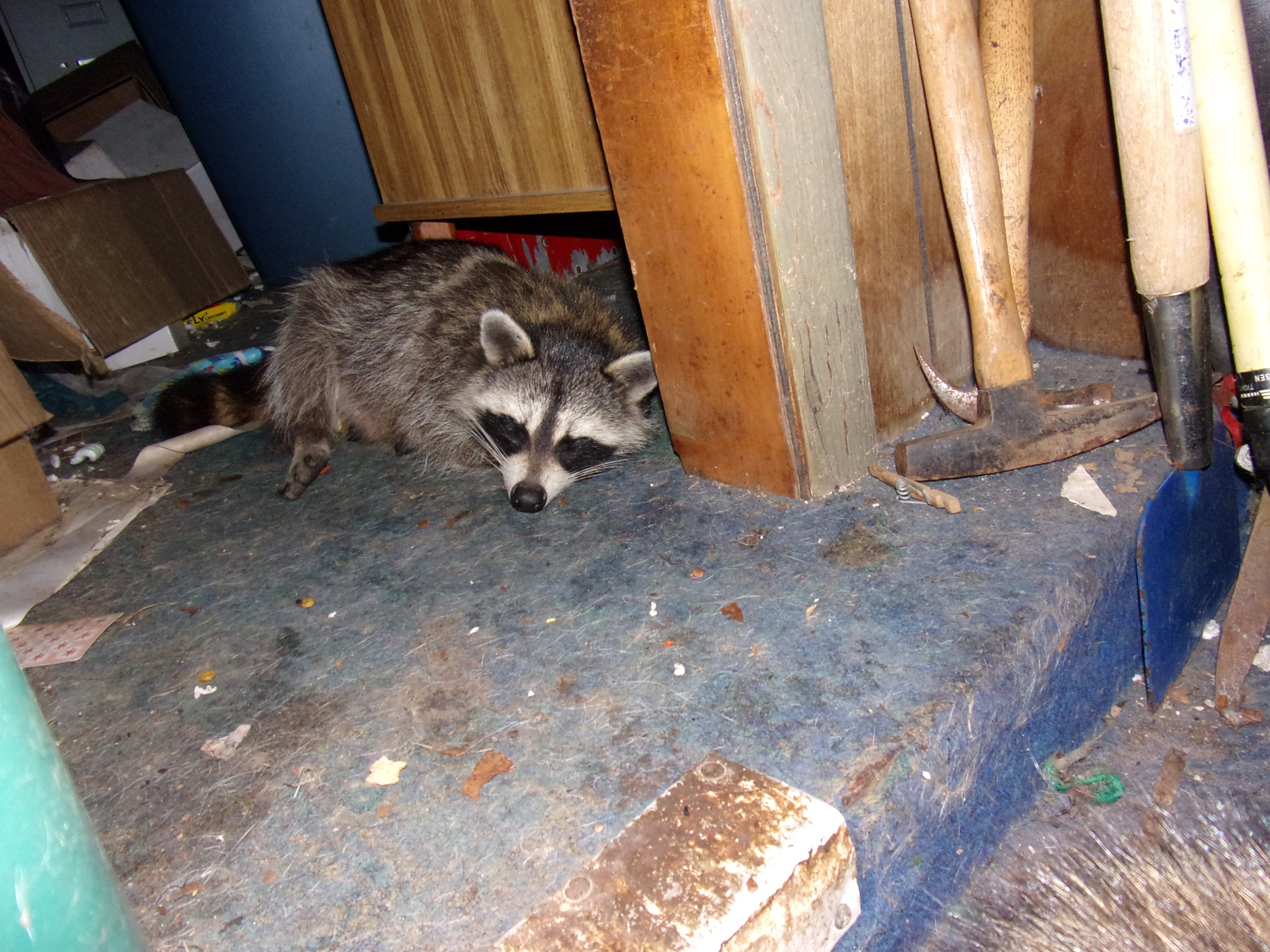 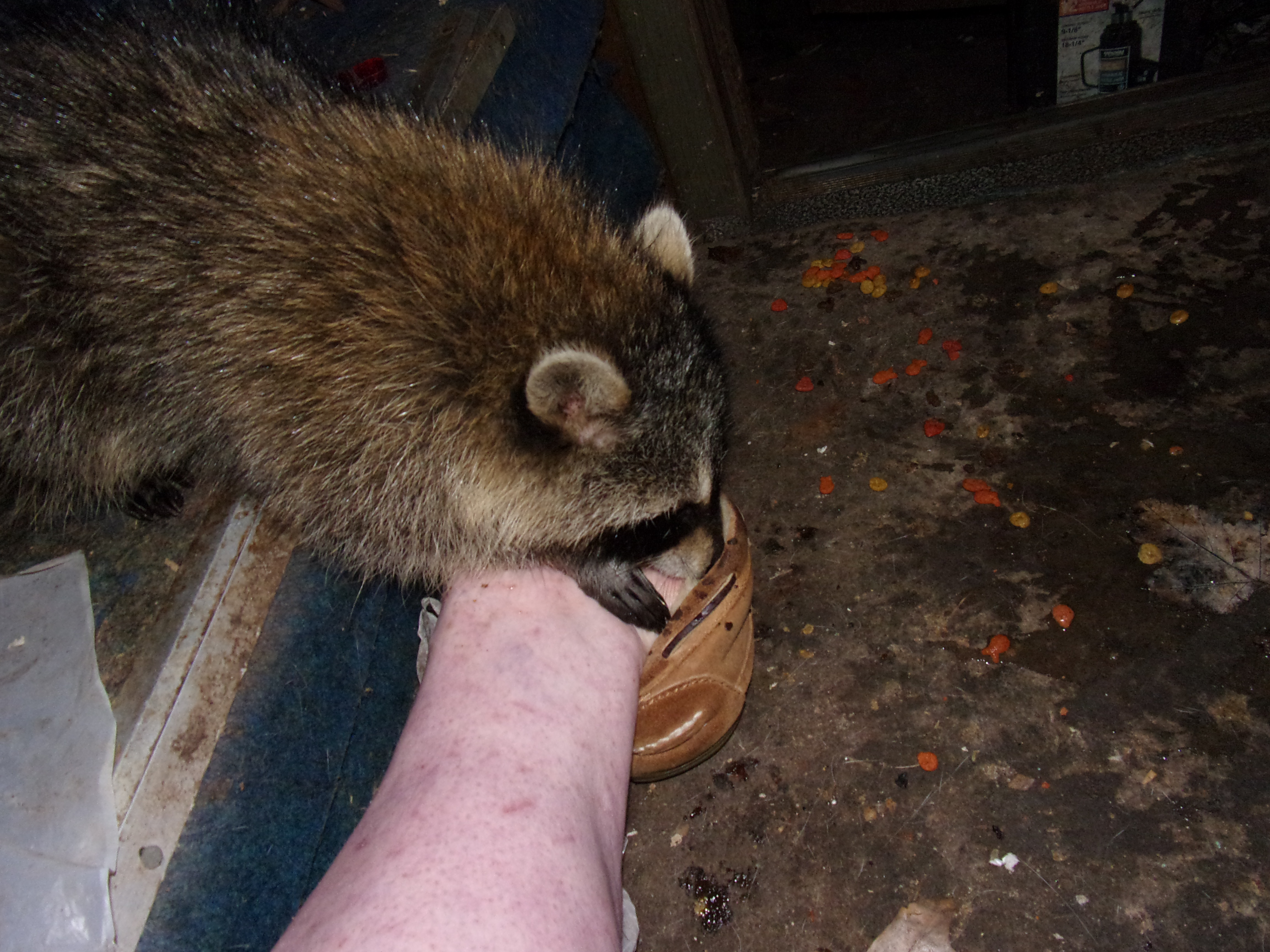 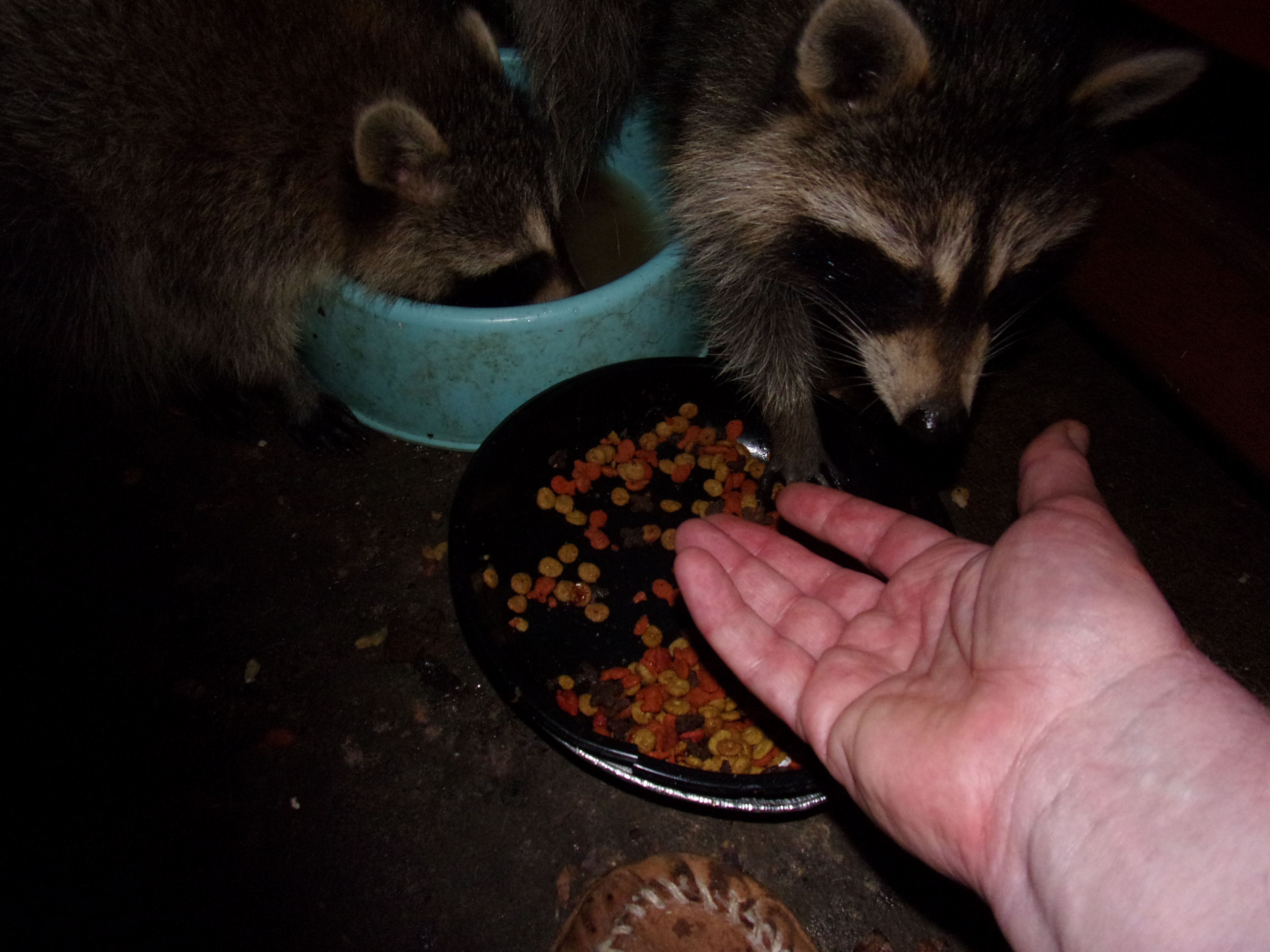 Skunks are a bit more cautious. 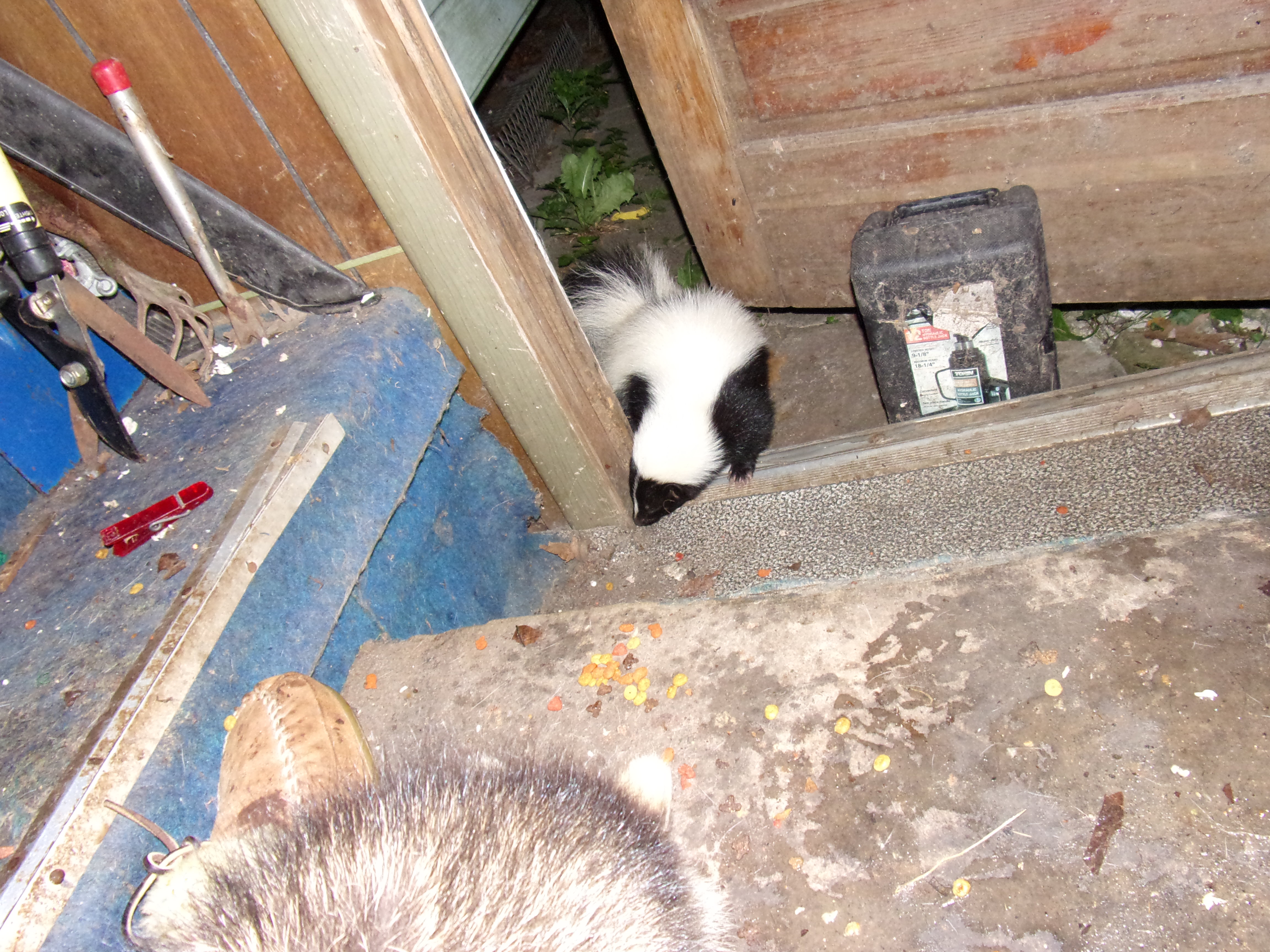 JAC: I’m not sure I would have done this, but all went well.

Here I am with one of the kits, I’m not making faces just talking to it to keep it calm. They were less friendly last week but I’m putting that down to the heat wave. 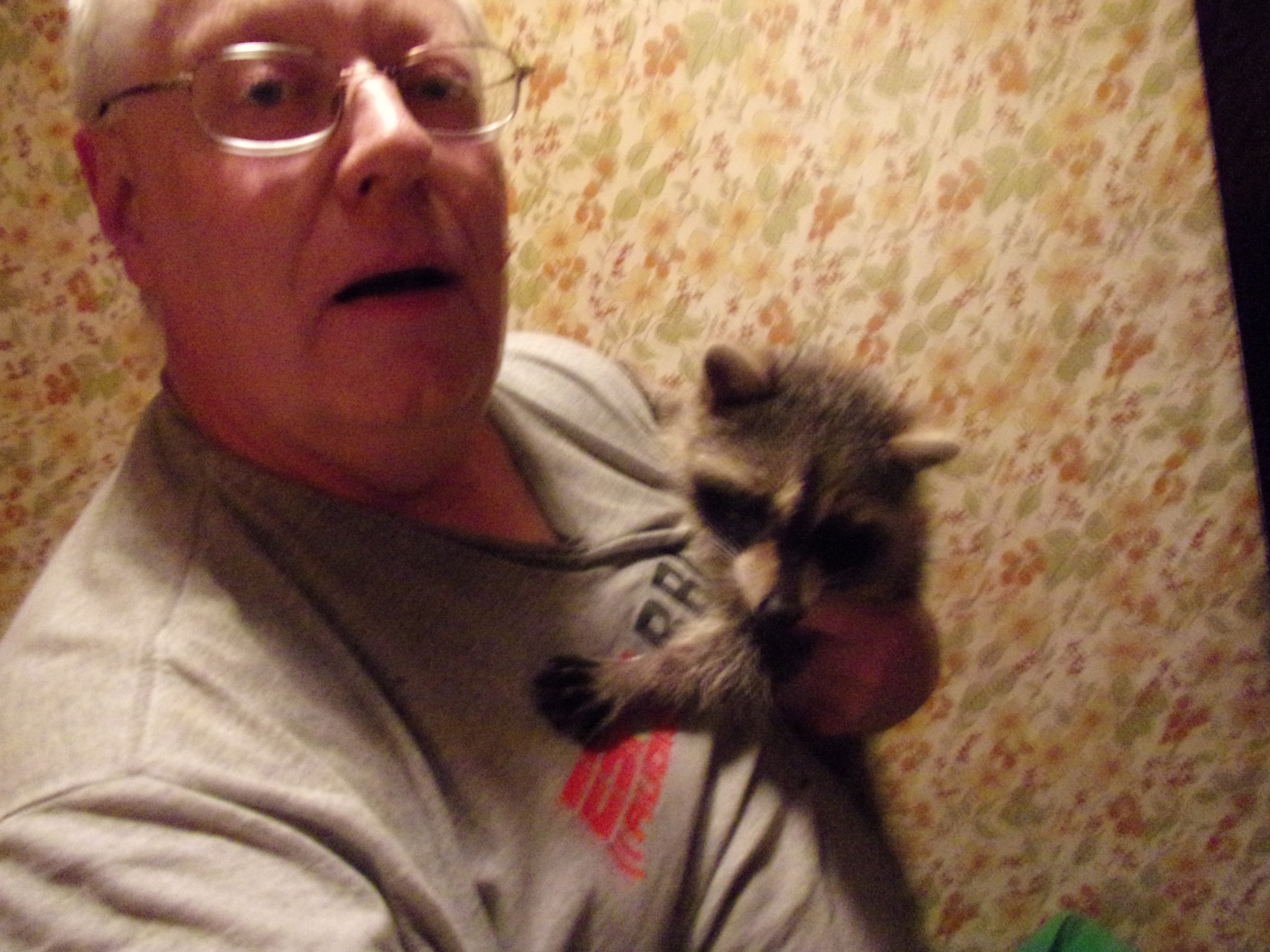