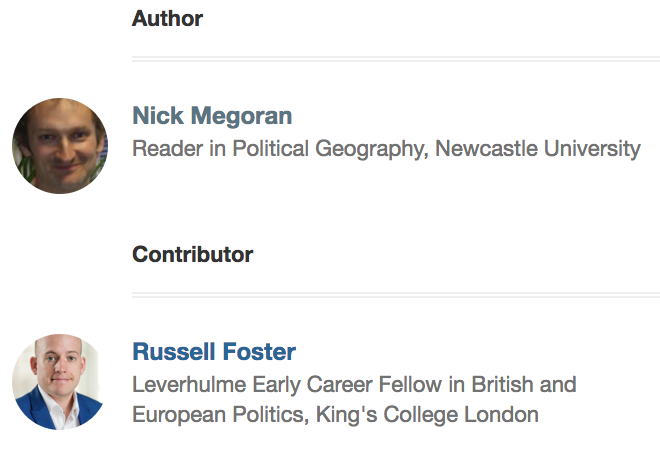 Naturally, Megoran and Foster repeatedly find “violence” in New Atheist writings, even if they have to take words out of context (they also mention the old canard that the USSR committed violence in the name of atheism):

Our study (jointly conducted by a Christian, an agnostic and an atheist) involved analysing the writing of Dawkins, Harris and Hitchens – the so-called “New Atheists”. We sought to establish their positions on US and UK foreign policy since the September 2001 attacks. We critically examined their bestselling books, along with their op-eds, social media posts and videos, to ascertain their positions – not on science or morality – but on politics, especially foreign policy.

They each argue that religion inherently incites violence, whereas atheism is more peaceful. Dawkins in particular asks: “Who would advocate killing in the name of a non-God?”

All three of these New Atheists were sympathetic to the attack on Afghanistan in 2001. Hitchens also vociferously supported the 2003 Iraq invasion, while Harris saw Western engagement with Islam and the Muslim world as part of a war that the West must win, or else face “bondage”. In his 2004 book, The End of Faith, Harris says (p.131):

While it would be comforting to believe that our dialogue with the Muslim world has, as one of its possible outcomes, a future of mutual tolerance, nothing guarantees this result – least of all tenets of Islam. Given the constraints of Muslim orthodoxy, given the penalties within Islam for radical (and reasonable) adaption to modernity, I think it is clear that Islam must find some way to revise itself, peacefully or otherwise. What this will mean is not all obvious. What is obvious, however, is that the West must win the argument or win the war. All else will be bondage.

And in specific reference to the Afghan war, Harris adds (p.53):

There is in fact no talking to some people. If they cannot be captured, and they often cannot, otherwise tolerant people may be justified killing them in self defence. This is what the United States attempted in Afghanistan, and it is what we and other Western powers are bound to attempt, at an even greater cost to ourselves and to innocents abroad, elsewhere in the Muslim world. We will continue to spill blood in what is, at bottom, a war of ideas.

We argue that the three supported this war because they read global politics through the lens of their atheism. They appear to see the West as locked in an existential war with religion, particularly Islam. There are four striking aspects of this atheist vision of global geopolitics.

Supporting a war conducted by others, however, is not the same as what ISIS does, stoning gays or tossing them off roofs, and beating women for wearing insufficient covering on the streets.  Harris, Hitchens, and Dawkins do not promulgate hatred of Muslims the way the media of the Middle East does, portray Jews in vile stereotypes and calling for the destruction of Israel. Nor do the New Atheists call for jihad and for the murder of apostates and unbelievers. In fact, I haven’t seen any of these men call for murder at all, except to go to war in response to religiously-inspired violence. What they are saying is that if others attack us in the name of faith, we are justified in fighting back and engaging in a war of words against the tenets of violence-promoting faith.

The authors also make the mistake of saying that all religion is violent, and that’s just dumb. They characterize New Atheists as saying that “religion is the most prolific source of violence”, and that may well be the case. Dawkins adds that “Islam is one of the great evils of the world”, and that is arguably true. And when Harris says “We are at war with Islam,” he means a war of ideas, not a call for us to annihilate all Muslims. Note that, in contrast, it is Muslim dogma that apostates and nonbelievers should be annihilated. Reader Michael, who sent me this link, also called my attention to the Hamas Covenant, which calls for militant jihad against Israel.

Finally, Foster and Megoran make the familiar distortions of Sam Harris’s Gedankenexperiment arguments, and take them as equivalent to the violence committed by Muslims at the behest of their faith:

Harris extends his argument by suggesting that the racial profiling of Muslims and judicial torture of terrorists may be ethical in what he calls “our war on terror”. At its extreme, he contends that “Muslims pose a special problem for nuclear deterrence” because theologically they don’t fear death. He reasons they are immune to the usual logic of Mutually Assured Destruction. Therefore, if an Islamist government acquired nuclear weapons, then “a nuclear first strike of our own” may be “the only course of action available to us”. The irony in this argument, which began with the declaration that religion is uniquely violent, is apparently missed by Harris, who has since qualified his position on torture as this:

My argument for the limited use of coercive interrogation (‘torture’ by another name) is essentially this: If you think it is ever justifiable to drop bombs in an attempt to kill a man like Osama bin Laden (and thereby risk killing and maiming innocent men, women, and children), you should think it may sometimes be justifiable to water-board a man like Osama bin Laden (and risk abusing someone who just happens to look like him).

Harris hasn’t called for torture, but simply discussed scenarios in which torture might be acceptable.

At the end of this execrable piece, Foster and Megoran equate the use of violence with advocating violence. And yes, violence may be the proper response if you’re attacked by people, but fighting against ISIS is not the equivalent of doing what ISIS does. The authors’ call for “nuance” is a call that invariably means “let’s go easy on religion”:

Our research demonstrates the paradox that although New Atheists claim that their ideology is more enlightened and peaceful than religion, they often end up advocating violence. This is because they exhibit a simplistic view of the world as being divided between two civilisations – secular and religious – which cannot coexist. In this, ironically, they arguably mirror the hardline religious leaders whom they so vociferously denounce.

Fifteen years after the invasion of Iraq and the chaos it unleashed, it is clear that there needs to be a more nuanced understanding of Middle Eastern societies and politics. Those nuances are as unlikely to be found in the analysis of fundamentalist atheists as they are in their religious antagonists.

I’ve been to many atheist meetings now, and I’ve never heard—not even once—a call for violence against religionists. In contrast, in the mosques and madrasses of the world you’ll hear that every day. 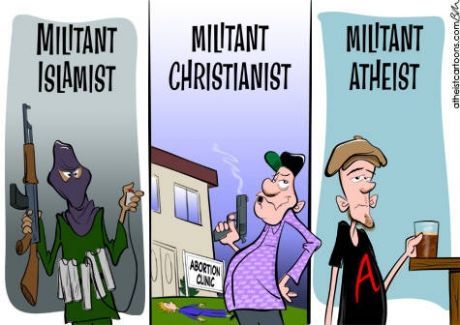