The Washington Post editorial below has on tap a considerable amount of science-bashing, as well as heavy pushing of the idea that there are “other ways of knowing” beyond empirical observation. Read and weep; the author is Michael Gerson, an op-ed writer at the paper and a former speechwriter for George W. Bush. I’m betting he’s religious, but that’s just a guess. 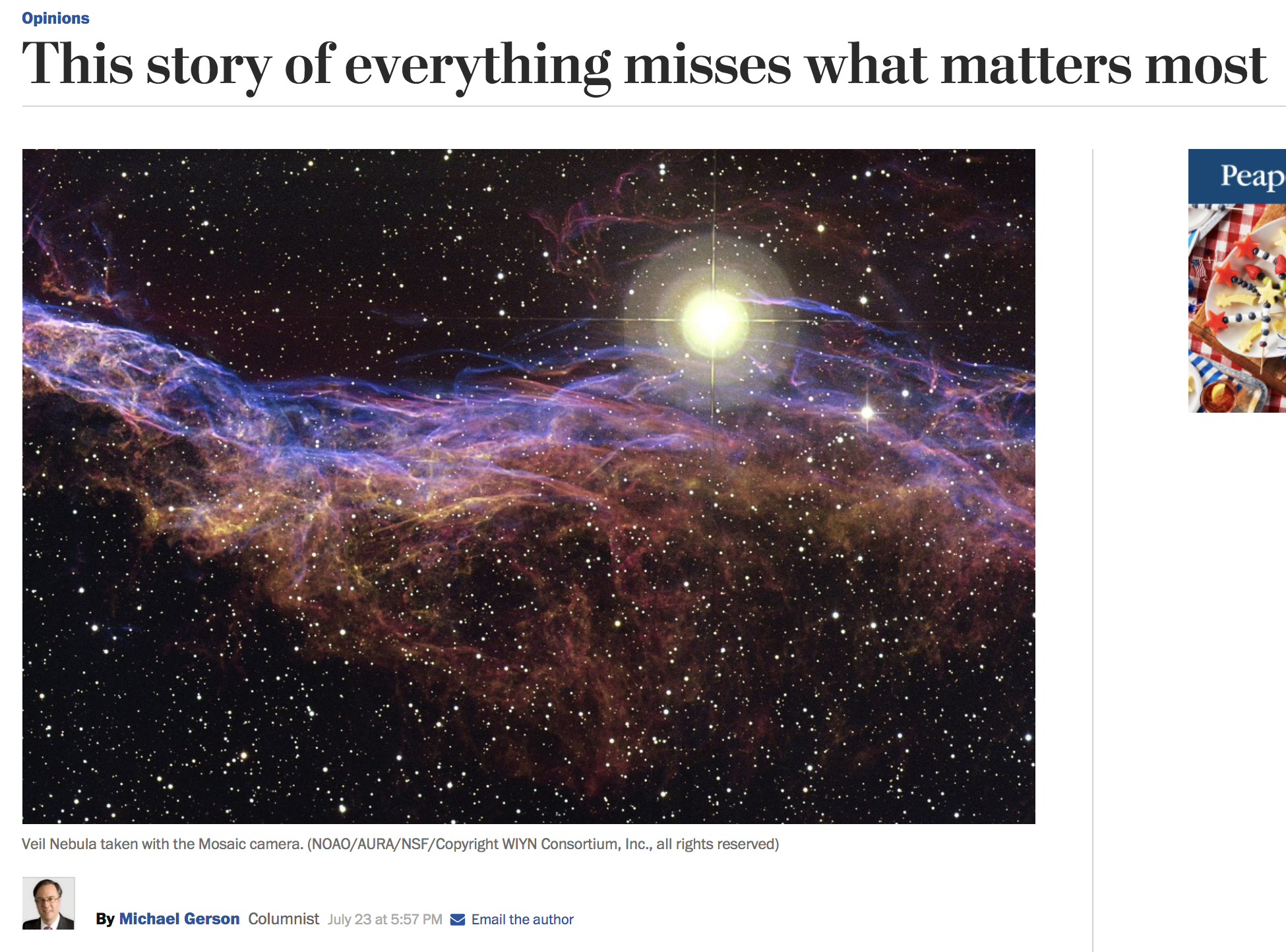 Gerson’s piece is a generally positive review of a new science book, Origin Story: A Big History of Everything, and he lauds its author, David Christian, for a lucid presentation of geology, anthropology, chemistry, linguistics, and sociology. But then Gerson gets exercised when Christian says he’s trying to replace traditional “origin myths” with true stories.  So Gerson goes off about science. OY! (Gerson’s words are indented.)

Christian has written a book that succeeds at everything except its stated purpose. Ultimately he wants to provide a replacement for traditional origin stories that come from religion. These he finds contradictory and outdated. But human beings are wired to need explanatory stories, revealing, as Christian writes, “ This is what you are; this is where you came from.” Without this rooting, people can become victim to a “sense of disorientation, division and directionlessness.”

Well, yes, maybe, as beings evolved to be curious, we want explanations. But are we wired to accept divine explanations? If so, what’s the evidence? And aren’t science and truth sufficient to satisfy that curiosity? If not, how do you explain Scandinavia, a group of largely atheistic lands where people are not sunk in ennui and anomie?

In some ways, “Origin Story” is appropriately humble. Christian’s version of history, he admits, provides no explanation for ultimate beginnings. Why did the universe start in a high state of order (which is a low state of entropy)? Why did the newborn universe — what Georges Lemaitre called the “Cosmic Egg” — have operating rules that allowed for the emergence of form and structure? There is really no telling. Maybe, Christian hints, the questions themselves are meaningless. And we certainly can’t turn to the divine. “Most versions of the modern origin story,” he writes, “no longer accept the idea of a creator god because modern science can find no direct evidence for a god.”

Christian thus repeats the defining mistake of scientism: the unquestioned assumption that all rational knowledge is scientific knowledge. This is anything but humble. It is a kind of epistemological imperialism that excludes knowledge coming from moral and philosophical reasoning, from theological argumentation and from historical investigation based on reliable witnesses. Not to mention the kind of knowledge that someone loves us. Christian attempts to increase the certainty of knowledge by limiting it to less consequential things. It makes the Cosmic Egg more like a Faberge egg — ornate, beautiful and, ultimately, useless.

My undergraduate advisor, Dr. Bruce Grant, responded (below) when he sent me the link to Gerson’s pablum:

Michael Gerson’s book review of “Origin Story” in his Opinion column, July 24, accuses the book’s author, David Christian, of repeating “the defining mistake of scientism: the unquestioned assumption that all rational knowledge is scientific knowledge.” But it is Mr. Gerson who is mistaken. Rational knowledge is not private knowledge. It requires verification. That requires evidence that is open to all to inspect. It cannot be simply made up, and accepted as true because it makes us feel good. That’s called wishful thinking. The author of the book Mr. Gerson reviews does not make claims beyond what current evidence supports. Scientists are free to ask any questions they want, but they are not free to make up the answers. That is the significant distinction between science and religion Mr. Gerson fails to recognize.

I’ll add that knowledge of the type Christian was writing about doesn’t come from philosophical or moral reasoning, for which you’d be hard pressed to identify universally agreed upon “truths”, though I think there’s value in both endeavors. (I don’t, for instance, think there are objective moral truths.) Theology, of course, produces NO truths, for every religion has different “truths” that are often incompatible. “Historical investigation based on reliable witnesses” is simply empirical investigation, which of course requires verification, as all good historians know. Finally, as I mention in Faith Versus Fact, even the question of whether someone loves us is based on reason. John Hinkley might have thought that Jodie Foster loved him, but there was no evidence for that. There are signs that someone loves you, depending on your definition of “love.”

Finally, Gerson pulls the ultimate theological rabbit out of the hat: “You can’t prove there’s no God.”

As to God, the claim that modern science can provide no direct evidence for a being apart from the natural world is tautological. Does Christian expect transcendence to be like a gas that glows blue when heated?

At the very least, a Christian should require evidence for the existence of God and Christ before turning her life over to Jesus worship. And yes, a God that interacts with the world should give the world some evidence that He exists. Otherwise it’s just the “wishful thinking” that Bruce mentions above. Such evidence is possible (I give some in FvF as did Carl Sagan in his book The Varieties of Scientific Experience: A Personal View of the Search for God [read it!]), but the evidence just isn’t there.  When we lack evidence for a widely believed proposition, like Santa Claus or Bigfoot, we tend to put that proposition in our mental dustbin—except when it comes to God.  Apparently Gerson is one of those who likes to suspend disbelief:

Christian’s view of the universe has an impressive breadth, but it is shallow. Scientism always involves reductionism. “A man who has lived and loved,” said G.K. Chesterton, “falls down dead and worms eat him. That is Materialism if you like.” If loyalty is really chemistry, and truth is just the wisp of electric current in a three-pound piece of meat, this is not enough to provide a sense of belonging and purpose. It is not even enough to divert a class of students who hear the call of a fall afternoon, and love, and a vast sky full of meaning.

Well, maybe science has its limits, but I for one am not going to find “purpose and belonging” in wish-thinking and scriptural fiction. In response to Gerson I’ll simply quote another great skeptic besides Sagan: Richard Feynman:

“I think it’s much more interesting to live not knowing than to have answers which might be wrong. I have approximate answers and possible beliefs and different degrees of uncertainty about different things, but I am not absolutely sure of anything and there are many things I don’t know anything about, such as whether it means anything to ask why we’re here. I don’t have to know an answer. I don’t feel frightened not knowing things, by being lost in a mysterious universe without any purpose, which is the way it really is as far as I can tell.”

I guess Feynman wasn’t properly wired to need explanatory stories—unless they were true.