According to The College Fix and its source, the student newspaper the Stanford Daily, a Resident Assistant at Stanford who used to be a member of student government has posted on Facebook a threat to punch Jews for being Zionists. Here’s the post of Hamzeh Daoud (click on screenshot to go to the post), which he later altered in light of widespread outrage. 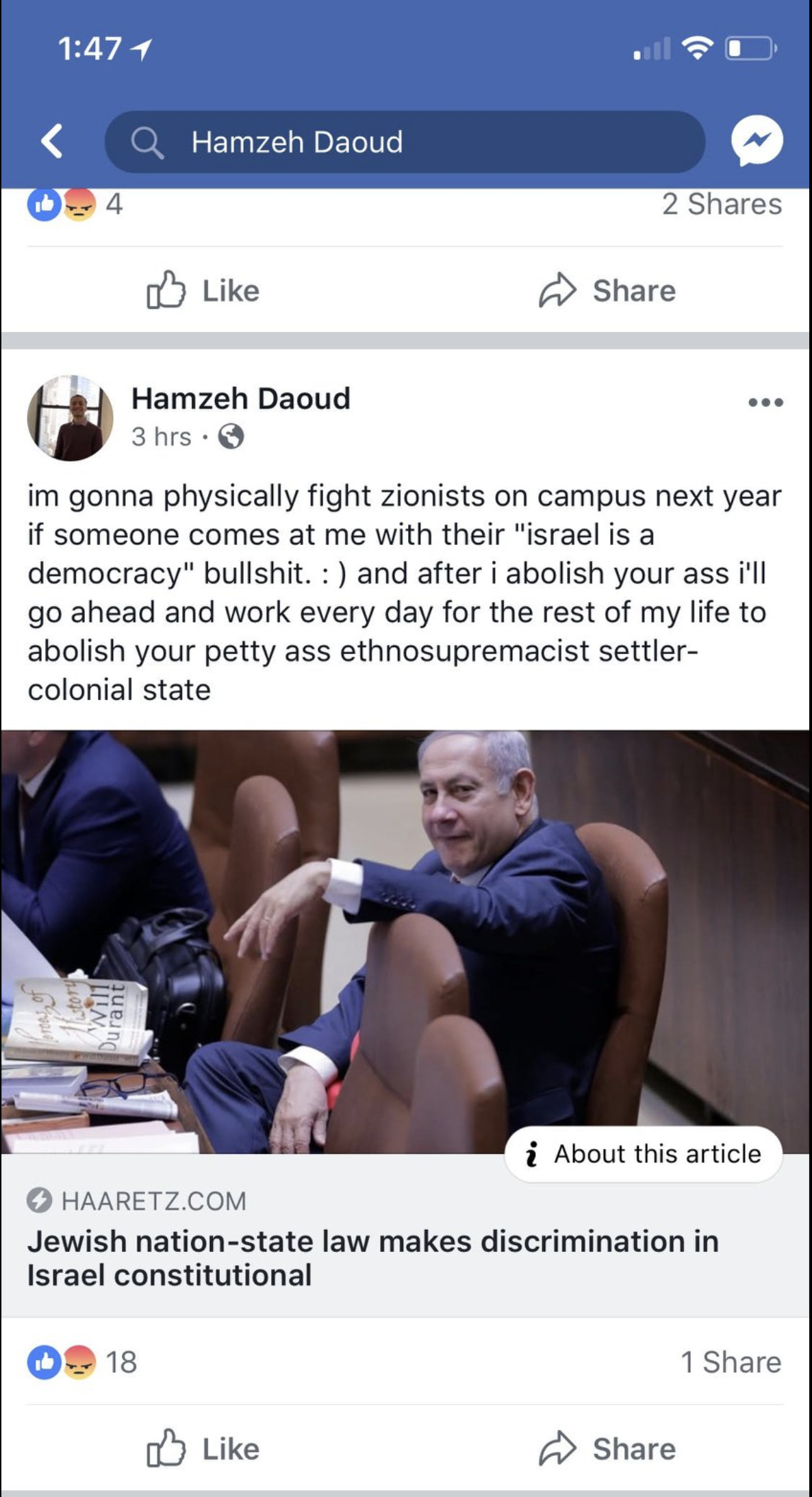 Let’s be clear: Palestine isn’t a democracy, and is far, far more oppressive and exclusionary than Israel. They oppress gays and women, won’t allow Jews to live there (talk about an apartheid state), and in fact give the death sentence to any resident who sells land to Jews. Daoud can’t see the beam in his own blinkered eye.

Apparently Daoud was set off by a new Israeli law affirming Israel as a Jewish state (see the explication of that law in the Wall Street Journal before you start railing about it). But leaving the law aside, note that Daoud’s real desire is to see Israel wiped off the map. That belies the claim of people like him who say “I’m anti-Zionist, not anti-Semitic”. Daoud is a member of the university’s Students for Justice in Palestine, an odious anti-Semitic organization one step more odious than CAIR and about as odious as the BDS movement, whose real motivation is also to wipe out the state of Israel.

From the Stanford Daily:

In his original post, Daoud wrote, “I’m gonna physically fight Zionists on campus next year if someone comes at me with their ‘Israel is a democracy’ bullshit. And after I abolish your ass I’ll go ahead and work every day for the rest of my life to abolish your petty ass ethno-supremacist, settler-colonial state.” In the same post, Daoud shared a link leading to a opinions piece on an Israeli news website that states “Jewish Nation-state Law Makes Discrimination in Israel Constitutional.” [JAC: It does not.]

Daoud edited the post at 2:21 p.m. Friday, nearly four hours after originally posting it. He changed the word “physically” to “intellectually,” and added, “I edited this post because I realize intellectually beating zionists is the only way to go. Physical fighting is never an answer to when trying to prove people wrong.”

On Saturday, the Stanford College Republicans (SCR) suggested that the University fire Daoud, who is a member of Stanford Students for Justice in Palestine (SJP), from his RA position due to his post physically threatening Zionist students at Stanford. Although Daoud edited his original post, which was made at 10:40 a.m. Friday, SCR posted a screenshot of the original to its Facebook page.

“SCR is disgusted by a threat of violence issued by Hamzeh Daoud, a rising junior at Stanford University, toward pro-Israel students,” the organization wrote. “Threatening to assault other students who hold a different point of view is anathema to a free society and any kind of education, let alone the operation of the premier research university in the world.”

Daoud, who will be a Residential Assistant in Norcliffe in the fall and who previously served on the Undergraduate Senate, wrote in an email to The Daily that his post was a “spur-of-the-moment emotional reaction” to the law.

“[The law] effectively made [Israel] an apartheid state and deemed Palestinian citizens of Israel second-class citizens,” Daoud wrote. “As a third-generation Palestinian refugee, I was appalled and took to Facebook to share my pain.”

First, there is no such thing as a “third-generation Palestinian refugee”: what he means is that he’s the grandson of Palestinian refugees. And that means he’s trying to claim victim identity by proxy. But never mind about that, either. Imagine if Daoud had threatened to punch members of other minority groups, like Catholics, women, or members of Black Lives Matter. He’d probably be expelled, but certainly removed from his position as Resident Assistant.

I don’t think Daoud should be officially punished for what he said, Even though it’s a threat, it’s not an imminent threat, and thus not a violation of the First Amendment. Taking away his RA-ship might be appropriate, but nothing should go on his Stanford record. But that doesn’t limit my ability to call him an anti-Semitic goon: the Palestinian equivalent of Dan Arel.

And if Stanford treats Daoud more gently than others who do the same thing, but to other minority groups, then they’re guilty of hyprocrisy.

In the end, Daoud’s rancor, and that of the SJP, just demonstrates the pervasiveness and viciousness of anti-Semitism in the U.S. and the fact that “anti-Zionist” is almost always a code word for “anti-Semite.” But people swallow “anti-Zionism” like a cat swallows cream. This reminds me of a joke that is ringing increasingly true:

A guy walks into a bar and notices a man talking to the bartender down at the other end. The guy does a doubletake because the man talking to the bartender really resembles Hitler. So the guy goes up to the man and says “Excuse me, but did anybody ever tell you that you look like Hitler?” The man says “Oh, but I am  Hitler. I have been reincarnated and I am back on Earth to kill 10 million Jews and 33 geese!” “Oh, my God! That’s terrible! But why 33 geese?” Hitler then turns to the bartender and says “See? I told you nobody cares about the Jews.”