The general view of human evolution among both scientists and laypeople is that “modern” Homo sapiens emerged from one single area in East Africa: perhaps from just a single population. That population supposedly evolved from an earlier ancestor of unknown identity—perhaps Homo erectus—underwent the transformation into the group of characters that identify our species, and then spread throughout the world. (This is independent of the evolution of what I consider other extinct subspecies of H. sapiens, like Neanderthals and Denisovans, which may have originated from single populations.)

A new paper by Eleanor Scerri and many colleagues, however, questions this conventional wisdom. The paper, an opinion piece rather than a scientific paper, appears in Trends in Ecology and Evolution (click on screenshot to see it, free with UnPaywall; the reference is at bottom, and a free pdf is here), limns what is known as the “multiregional hypothesis” for modern H. sapiens. This is the view that there were many semi-isolated populations of our ancestor scattered throughout Africa, and that each evolved quasi-independently because there were geographic and climatic barriers that reduced gene flow between the groups.

Each population then evolved different traits—of behavior, morphology, and mentation—that eventually combined through more extensive migration into one species that then spread throughout Africa and then the world. It is as if a group of tailors were to craft a garment, each responding to local tastes and materials, and then those garments were combined into one garment that became the “standard and universal” one.

“Anatomically modern humans” date from about 315,000 years ago, with the first finds being in Moroccan caves at Jebel Irhoud. These finds contravened the idea that the earliest humans evolved in East Africa, and suggest that already at that time modern H. sapiens was widely distributed throughout Africa. However, the Jebel Irhoud skulls, while having most of the features of modern human skulls, were relatively elongated. Here’s the earliest find (left) compared with a more recent (95,000 years old) modern H. sapiens skull. The elongation of the earlier one is evident. 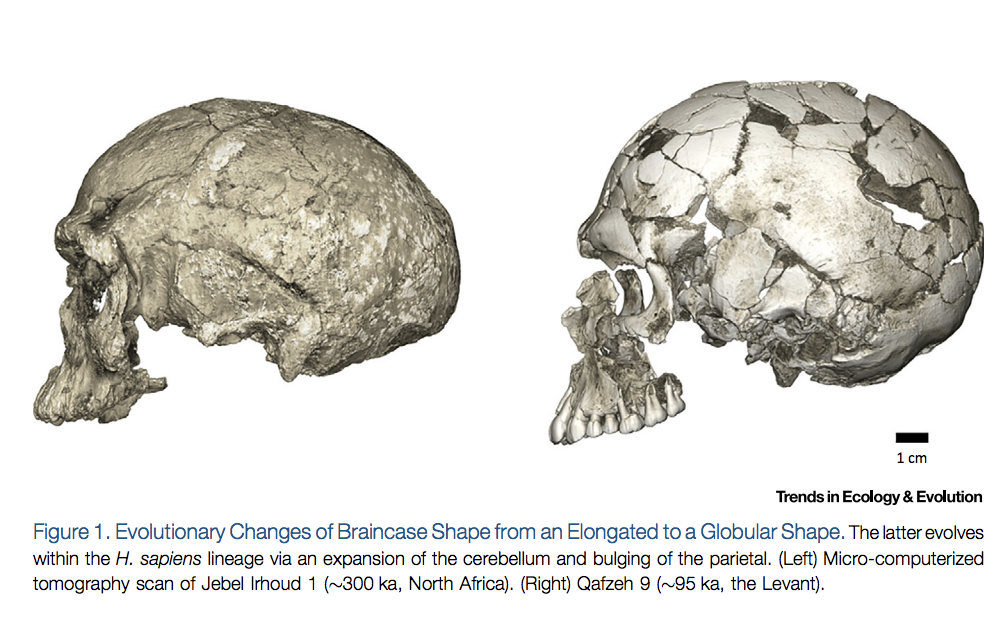 Multiregional evolution is supported by the authors’ contention that human populations were structured morphologically as late as 15,000 years ago, with some retaining more ancestral skeletons and others being more advanced—but all considered by anthropologists to be part of the single species H. sapiens sapiens (“modern” Homo sapiens).

Likewise, different populations of H. sapiens sapiens had different stone tools at about the same time, with some being more advanced than others, and this regional differentiation also held for other cultural artifacts like bone tools and shell beads. This too suggests a subdivided species, perhaps with different populations having different degrees of mental/neurological evolution.

What caused this differentiation? The authors aren’t sure, but say a likely cause was different environments that not only isolated populations from each other, but imposed different selection pressures on them. Climate is an obvious difference, with the figure below showing big differences in precipitation among parts of Africa that housed different populations of H. sapiens sapiens (areas within colored squares). Note the variation among localities even at the same time. These would cause obvious barriers as dry places would impede migration between wet places (the Sahara region, with less precipitation, is an obvious barrier).

Precipitation would affect the vegetable and animal food available, and hence the means of foraging and food preparation, and that would affect selection for tool usage and for forming different kinds of tools. Those pressures, in turn, could affect social evolution and the structure of our brains. Further, random differences in the frequencies of genes arising by genetic drift could act as different beginning substrates for natural selection, as the course of natural selection depends on its genetic and morphological starting points.

So there is some evidence for the authors’ multiregional hypothesis, which, as Ed Yong characterizes in an article in The Atlantic like this:

The best metaphor for this [the authors’ “multiregionalism” hypothesis] isn’t a tree. It’s a braided river—a group of streams that are all part of the same system, but that weave into and out of each other.

These streams eventually merge into the same big channel, but it takes time—hundreds of thousands of years. For most of our history, any one group of Homo sapiens had just some of the full constellation of features that we use to define ourselves. “People back then looked more different to each other than any populations do today,” says Scerri, “and it’s very hard to answer what an early Homo sapiens looked like. But there was then a continent-wide trend to the modern human form.” Indeed, the first people who had the complete set probably appeared between 40,000 and 100,000 years ago.

But there’s evidence against the hypothesis as well, the most telling being genetic analyses suggesting that different populations of humans in Africa didn’t diverge from each other 300,000 years or so ago, but between 100,000 and 150,000 years ago, suggesting a genetic and populational uniformity before that.

So we have a conflict between what the genetic data tell us and what morphology and tool use tell us.  This may not be a problem since the genetic data is not yet rock-solid. Nevertheless, we should take the paper as tentative but suggestive, which is why it’s an “opinion” piece rather than a regular scientific article.

The implications aren’t that important for non-paleobiologists. Although the multiregional theory suggests that our species emerged in a patchwork fashion, like Yong’s braided rivers, we know that as that species spread throughout the world in perhaps several egresses from Africa, those spreads did not emanate from many different places in Africa. And they don’t overturn the indubitable fact that humans are, in essence, complex African apes.

53 thoughts on “Did modern Homo sapiens evolve in different parts of Africa?”