If you’re in evolutionary genetics, you’ll know the name of Francisco J. Ayala.  When I first met him in 1971 at Rockefeller University, where he was studying fly genetics in Theodosius Dobzhansky’s lab (I was a beginning grad student), he was a Dominican priest, and came to lab in his priest suit, complete with collar.  When Dobzhansky retired and moved to the University of California at Davis in 1971 (and I became a conscientious objector working in a New York hospital), Ayala was hired to run the fly lab while Dobzhansky had a sort of “emeritus” status. (I had also gone to Rockefeller to become Dobzhansky’s student, but his retirement ended that plan.)

Ayala gained renown for his work on genetic variation revealed via electrophoresis in Drosophila: the same project that brought fame to my own advisor Dick Lewontin.  Lewontin got there first, and he and Ayala hated each other. That wasn’t because of competititiveness (at least on Dick’s part), but because Dick found Ayala’s work shoddy and despised the man’s careerism.

I remember one evening around 1980 when Lewontin was invited to give a big science talk at UC Davis, where I was then a postdoc. Ayala gave the introduction—the most insulting introduction I’ve ever heard. He made several snide remarks about Dick, and wound up saying that Dick was “most famous for attacking other people’s work.” We all cringed: Ayala’s words were nasty and reprehensible.

Dick didn’t miss a beat. He stood up and told a story of the famous baseball umpire Bill Klem. (That story is probably apocryphal.)  When someone who didn’t like Klem’s calls said that “he called them as he saw them,” Klem replied, “No, I called them as they WAS!” Lewontin’s point, of course, was that he was critical only of those who were truly wrong. Having seen the correspondence between them about electrophoresis (Dick showed it to us, and wouldn’t go public with criticism until he’d given the person every chance to correct their errors), I saw that Dick was right about Ayala. I won’t go into details of their scientific fracas here, but I remember them well.

Ayala became rich (I believe that, besides running a vineyard in California bearing his name, he had family money and also married a hotel heiress) and very powerful, but was not widely liked in the population genetics community nor at UC Davis, where most of the faculty I knew couldn’t abide the man. (I hasten to add that some people did like him.) As I recall, when Ayala moved to the University of California at Irvine, already well known, the department at Davis was so happy to be rid of him that they didn’t make a counteroffer (I am going from memory here and may be wrong.)

I found Ayala snobbish, arrogant, and above all a rampant careerist, who would do anything to become famous and promote his name. Eventually he donated $10 million to the biology section of UC Irvine, which renamed the biology school the Ayala School of Biological Sciences (it’s already been renamed on its website). A library was also named after him. He continued to accrue power, having a huge influence about which evolutionary biologists got into the National Academy of Sciences. Ayala also won the million-pound Templeton Prize in 2010 (he was always soft on religion, and refused to say whether he believed in God).

An example of his accommodationism is this book, which maintains that evolution was a “gift to religion” because it solved theological problems. If evolution, for example, produced imperfect design and nasty things like parasites, we need not wonder why God would create these things—supposedly solving the problem of evil. It didn’t, of course, because one could counterargue that a powerful God could have tweaked evolution to leave out the evil bits. 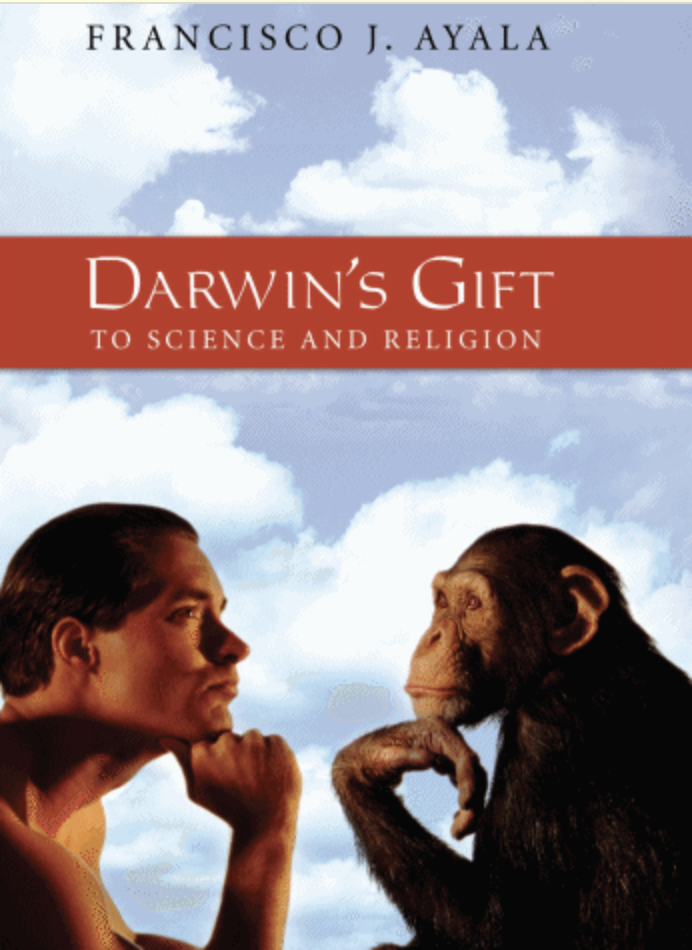 At Davis Ayala had the reputation of being a letcher, or at least of having a “keen eye for the ladies.” I remember well one of his graduate students, an attractive woman, telling me that when she met with Ayala and wanted to ask him for something, she’d always wear a very short skirt to curry his favor. I don’t recall any direct accusations of sexual harassment, but of course those were the days (early 1980s) before that kind of behavior was widely recognized as destructive and demeaning to women, and when the climate was just “boys will be boys.”

I must say that I was, surprised, though, to see this headline in the L.A. Times (click to read the article):

. . . In 2011, Ayala donated $10 million to the School of Biological Sciences, which then bore his name. It was the largest gift from a faculty member at the time.

The university said Ayala’s name has been removed from that school, and is also being removed from its central science library, graduate fellowships, scholar programs and endowed chairs. The biology school will now be known as the UCI School of Biological Sciences.

“I thank and commend our colleagues who reported this misconduct,” Chancellor Howard Gillman said in a statement. “Coming forward with this information was extremely courageous. Professor Ayala’s behavior defied our core beliefs and was inconsistent with our policies, guidelines and required training.”

Micha Liberty, an attorney who represents three of the women, said UCI ignored years of complaints from professors and graduate students that Ayala touched them and made sexual and sexist comments. She said one of the professors she’s representing reported Ayala’s conduct three years ago, but university officials failed to investigate or sanction him.

“They just told him, ‘Stay away from her,’” Liberty said. “Dr. Ayala has had a long and successful career and was clearly an asset to the UCI campus … and that in turn motivated UCI to look the other way when it came to complaints of sexual harassment.”

. . . Liberty said her clients are dissatisfied that UCI has not acknowledged its failure to act on previous complaints and protect women from Ayala. She said there are many more victims but most are scared to come forward because his stature in the field gives him the power to make or break careers.

I don’t think he has that stature any more.

Here’s the official announcement sent to the UC Irvine community: 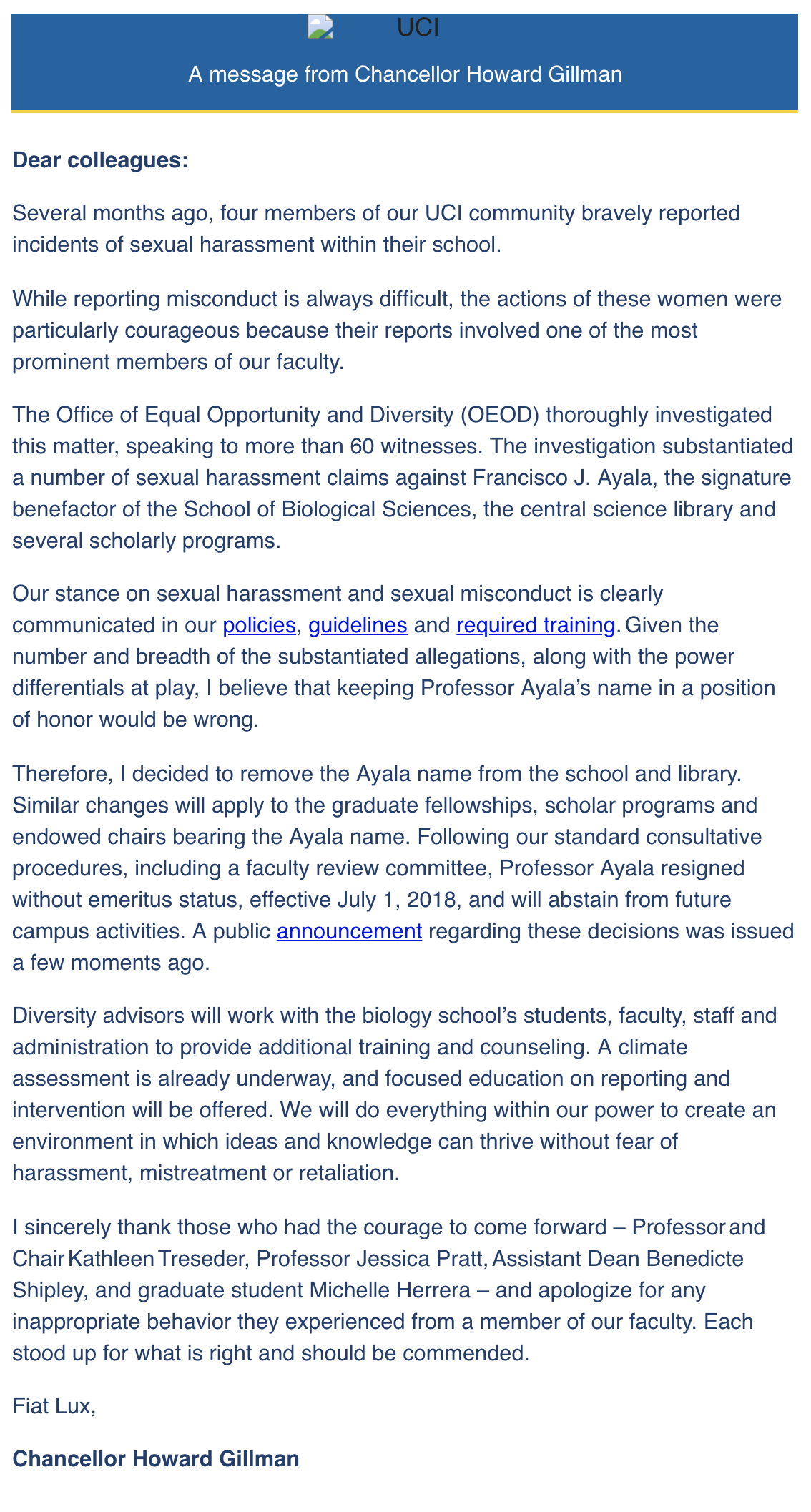 Ayala’s behavior, combined with his immense power, wound up creating a horrible situation. Horrible for science, horrible for the community of scientists, and, above all, horrible for women. As far as I’m concerned, he’s now got what he deserved, but he got it too late.