You can sense the palpable glee at HuffPo as they put this story up, as if it was just the perfect thing to do to Trump’s press secretary (click on screenshot):

Here’s the story if you haven’t yet heard it:

White House press secretary Sarah Huckabee Sanders was just sitting down to a farm-to-table meal at The Red Hen in Lexington, Virginia, Friday evening when, she said, the restaurant’s owner heard she was there ― and asked her to leave.

According to Sanders, who confirmed the story in a tweet after an image from the restaurant began circulating the internet, the restaurant owner objected to her work defending President Donald Trump, who has been under fire for an immigration policy widely decried as unnecessarily cruel.

“I politely left,” the press secretary said on Twitter.

“I always do my best to treat people, including those I disagree with, respectfully and will continue to do so,” she added.

The restaurant’s website appeared to crash Saturday as the story went viral, and phone calls by HuffPost could not make a connection.

Owner Stephanie Wilkinson told The Washington Post that one of the chefs had called her at home to tell her Sanders was sitting in the tiny restaurant, and that the staff had concerns. Wilkinson then drove over, huddled up with her staff and asked whether they would like Sanders to leave. They said yes.

“I’m not a huge fan of confrontation,” Wilkinson told the Post. “I have a business, and I want the business to thrive. This feels like the moment in our democracy when people have to make uncomfortable actions and decisions to uphold their morals.”

She said the town largely opposed Trump and noted that several of her employees are gay. In her official capacity, Sanders has defended a wide array of the president’s controversial comments and actions, including his stance on LGBTQ issues.

Wilkinson felt justified in her action because Sanders is a public official, not a regular customer with whose politics she disagreed.

. . . The owner said she and Sanders stepped outside, where Wilkinson explained that her establishment has “certain standards that I feel it has to uphold, such as honesty, and compassion and cooperation.”

I wonder how many customers in conservative Lexington, Virginia have been served at that restaurant who agree with Sanders, but aren’t public officials—or are even bigger bigots. Just because Sanders makes her views public—or rather, constantly defends Trump’s odious views—does she not have the right to have a meal in a restaurant without getting heaved out? How many customers who are dishonest or not compassionate have been served in that restaurant? How many bigots and Republicans have tucked into their fried chicken at The Red Hen? My guess is: a LOT.

Don’t get me wrong: I despise Sanders, whose job I see is to lie to the press and public, and defend an indefensible Presidency. And I wouldn’t invite her to my home. But if she wants a quiet meal in a restaurant without a ridiculous display of virtue signaling by the owners, is she not entitled to it? In fact, by kicking her out, I suspect Wilkinson violated the law. This is not a wedding-cake-baking case where the baker is asked to perform an act that violates his religious beliefs, though we can discuss that, too.

But we are supposed to be better than this. We are supposed to treat our opponents with civility and not humiliate them in public. I’m sorry, but this really is a case of Trump Derangement Syndrome, where people become irrational because our President is irrational.

And here are some of the other gleeful liberals who rejoiced in Sanders’s humiliation in comments at HuffPo: 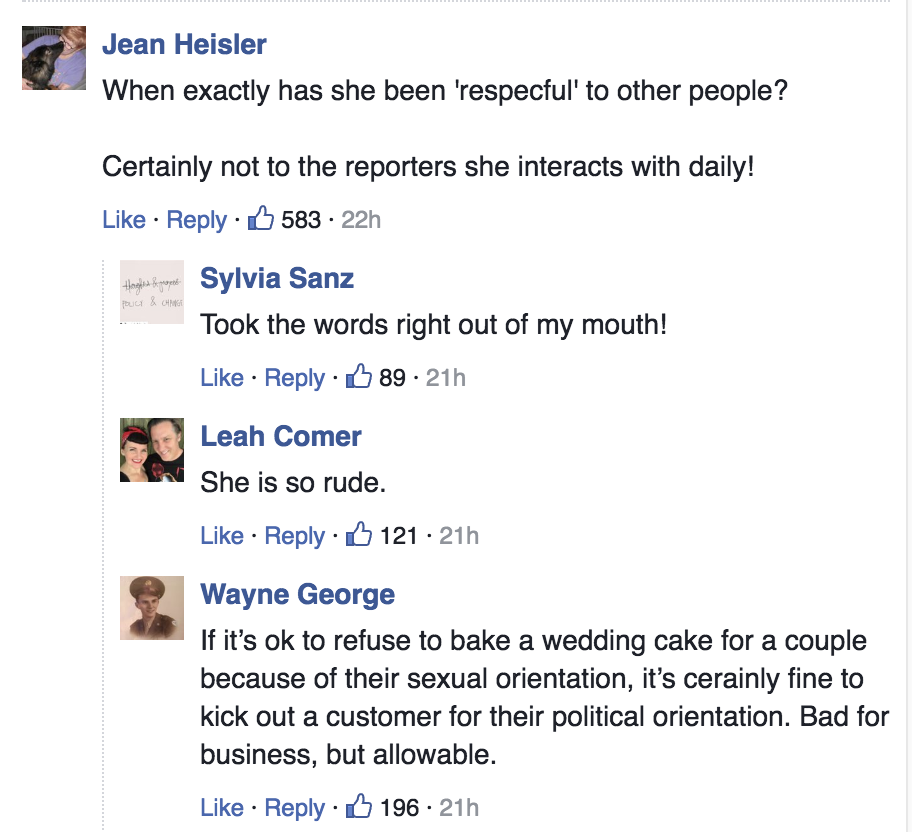 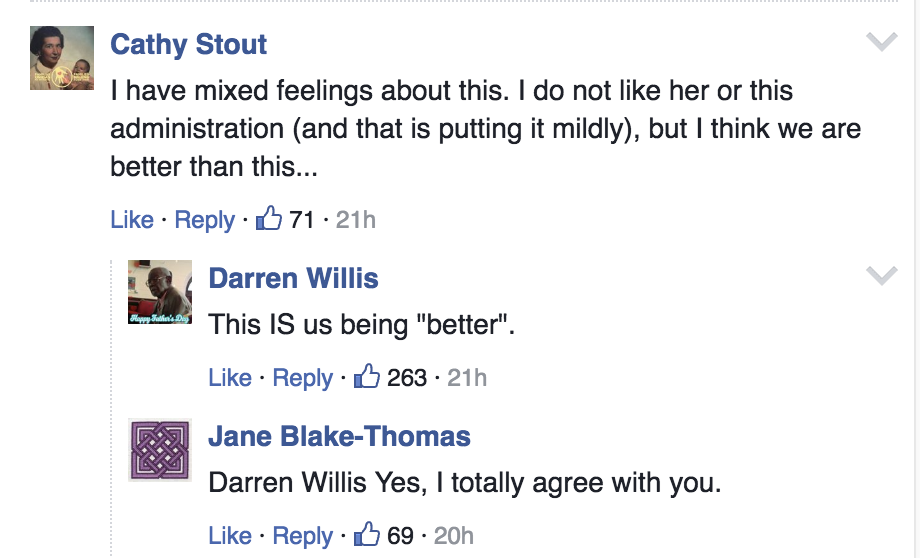 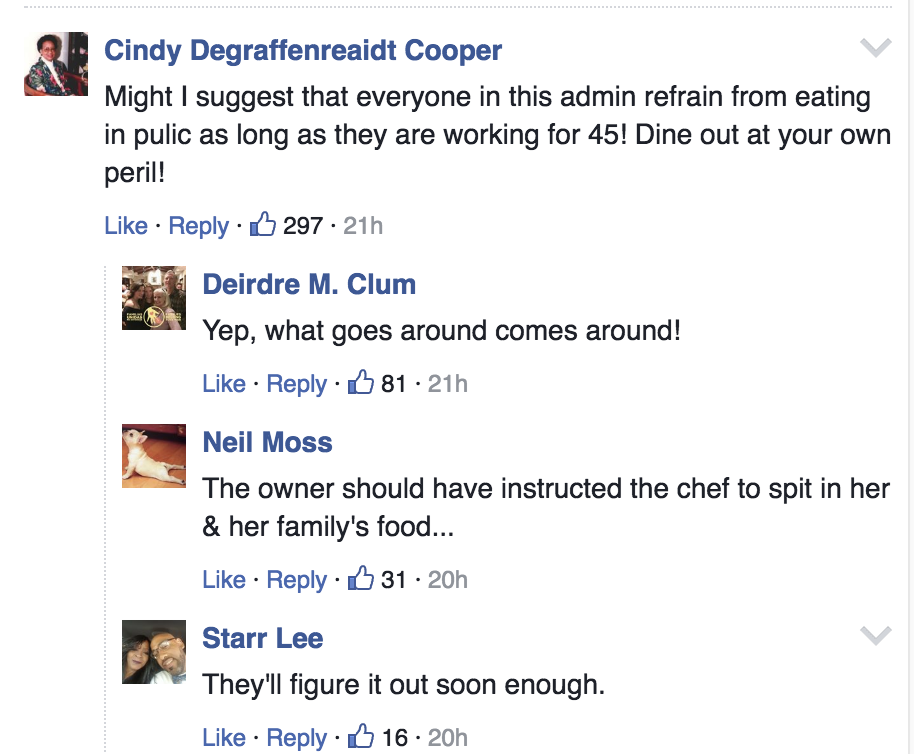 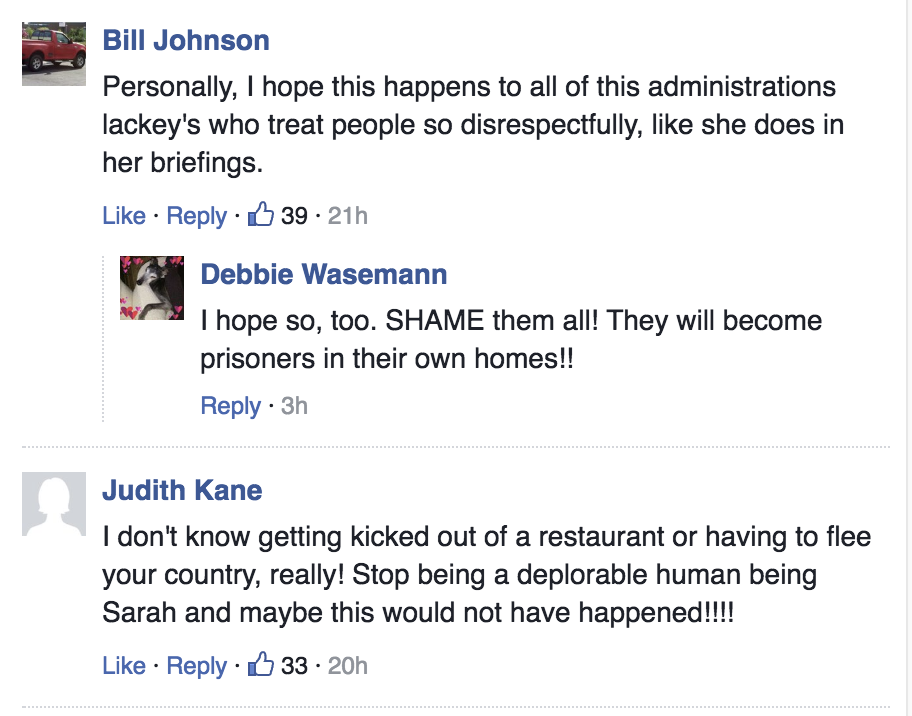 The comments go on and on, nearly all of them like this. I am ashamed of my political compadres.  Even if you take issue with the government’s defense of the bakers who refused to make a cake for a gay wedding (and I now think that the law should not allow bakers to refuse this kind of service), Sanders had no part in that case. Her sole crime is working for Trump. That’s something that no person with any progressive feelings should do, but we can’t keep demonizing our enemies and rejoicing in their mistreatment. We all know where that will lead in a few years.

Trumpites and left-wing sufferers from TDS have now tried to comment pro and con on the restaurant’s Yelp page to the extent that it’s been put on hold and monitored. This is where we are as a country.

Here’s Marc Radazza’s response to other people’s glee, and I agree with it (he’s a First Amendment attorney who writes at the site Popehat). (h/t: Grania)

Pam Bondi gets shamed out of a cinema. Sarah Huckabee Sanders gets booted from a restaurant. Kirstjen Nielsen gets picketed at a Mexican restaurant.

Trump’s goons are actively ruining lives on massive scale. It is perfectly fitting for taxpayers of conscience to ruin their night

I disagree with all 3 of these women's policies. I would never do this to them. And, if you're promoting it now, I don't want to hear you whining when groups of goons are doing this to people you like. https://t.co/v7iNj6YQNf

Yeah, I don’t want to hear you whining when a right-wing restaurant owner kicks Nancy Pelosi or Bernie Sanders out of their establishment because they favor more liberalized immigration or abortion laws! Can you imagine the furor that the Left would raise when the Right said, “These people deserve it because of their vile and immoral politics”?