All is well with the ducks despite yesterday’s trauma. I had a mini-trauma today: I went to the pond and there were FOUR DRAKES swimming about: Henry, Hank, and two new interlopers. Honey spent a long time chasing them around, and I worry that this wears her out. The ducklings stayed on the island and wouldn’t venture into the water, as they got chased by the males. But I brought out my trusty Super Soaker and drove the drakes away with some well-aimed squirts of water. They haven’t yet returned. I present some pictures but we have three videos. Be sure to watch them, as they’re short and show a lot of the behavior we see at the pond.

Four drakes: Honey is chasing two. It’s out of focus because it was dark and the shutter speed was slow 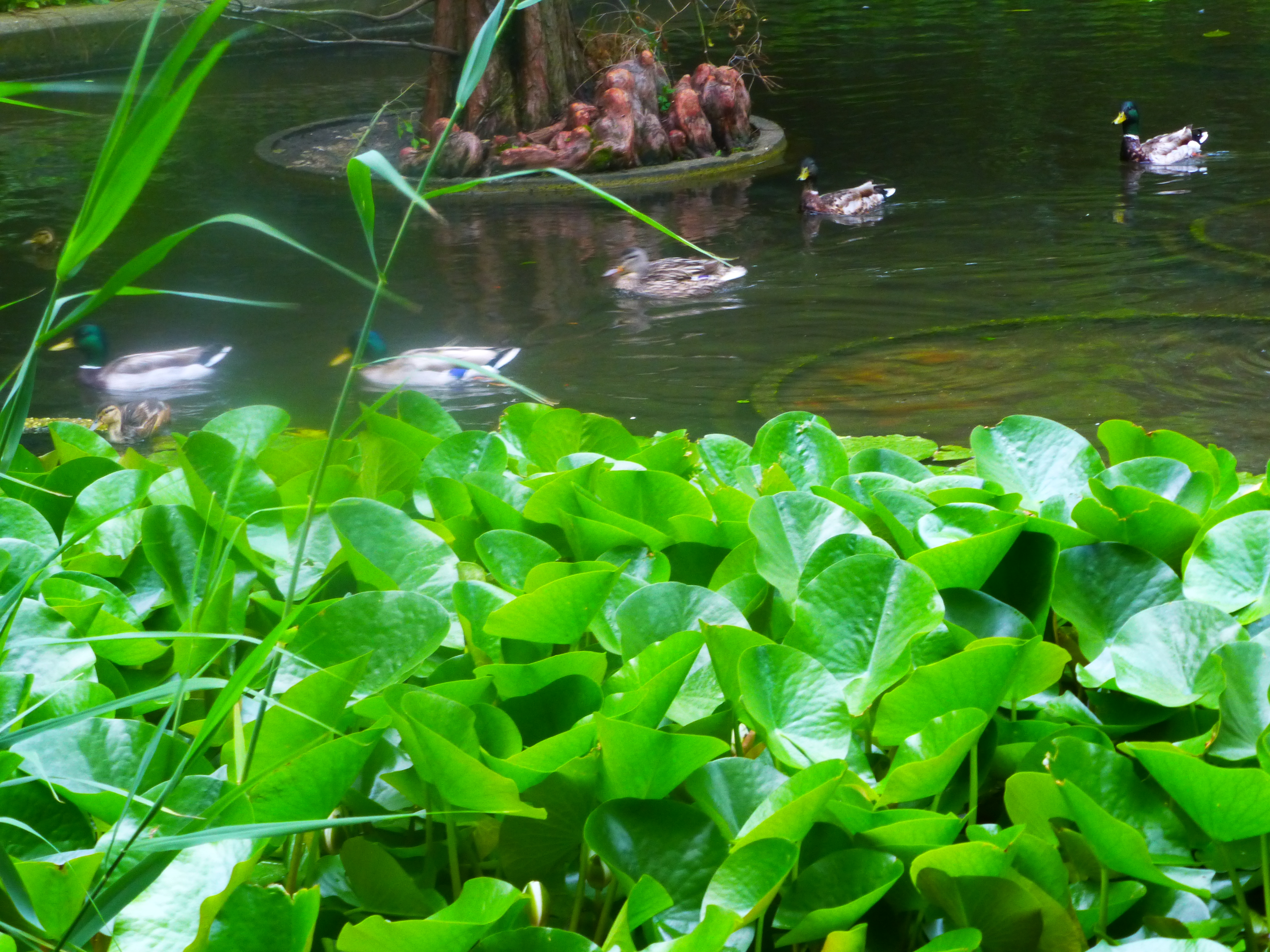 Various pictures of bathtime this afternoon (bathtime is the best time): 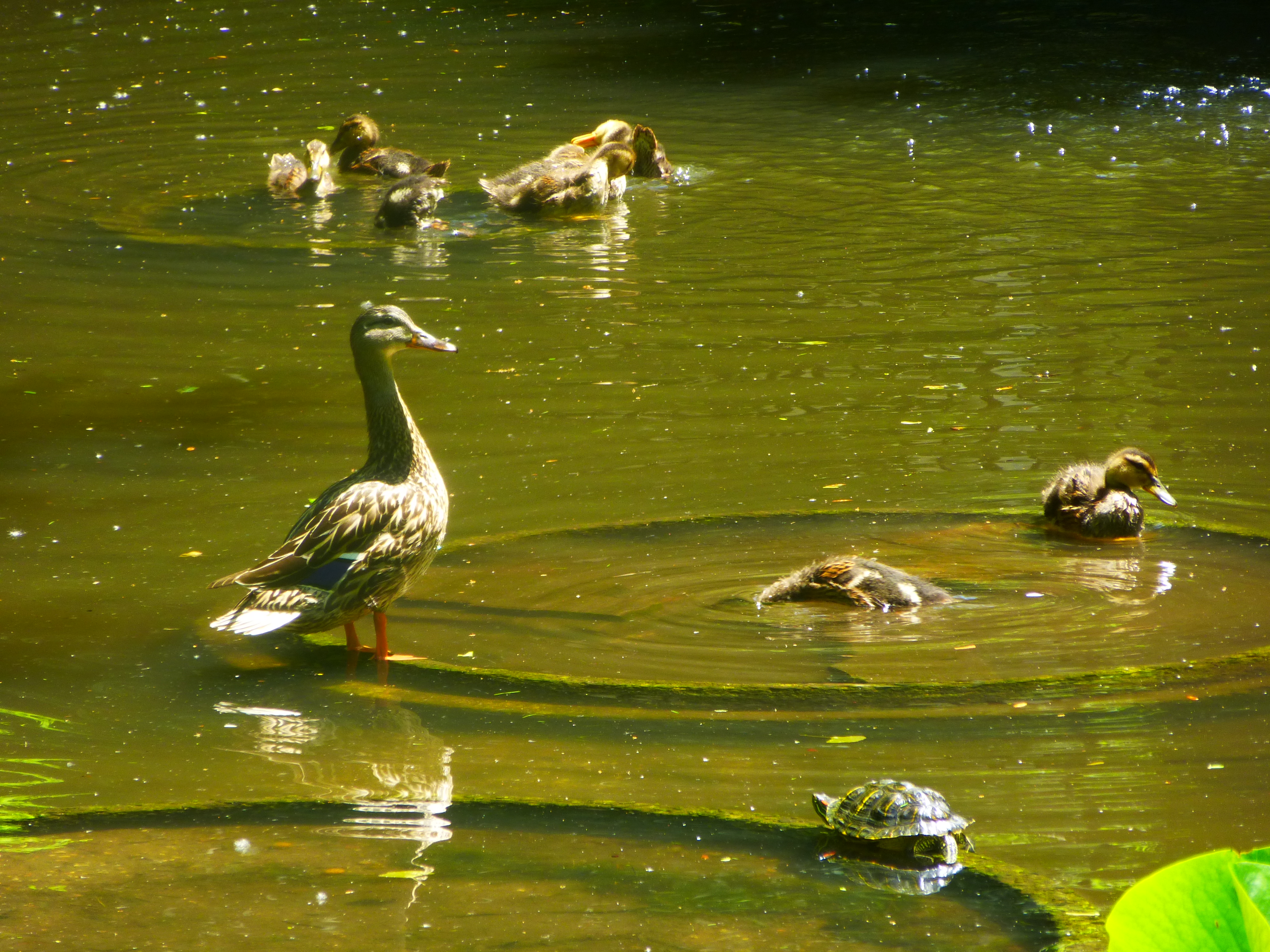 Note that the ducklings have started dabbling (going upside down to forage): 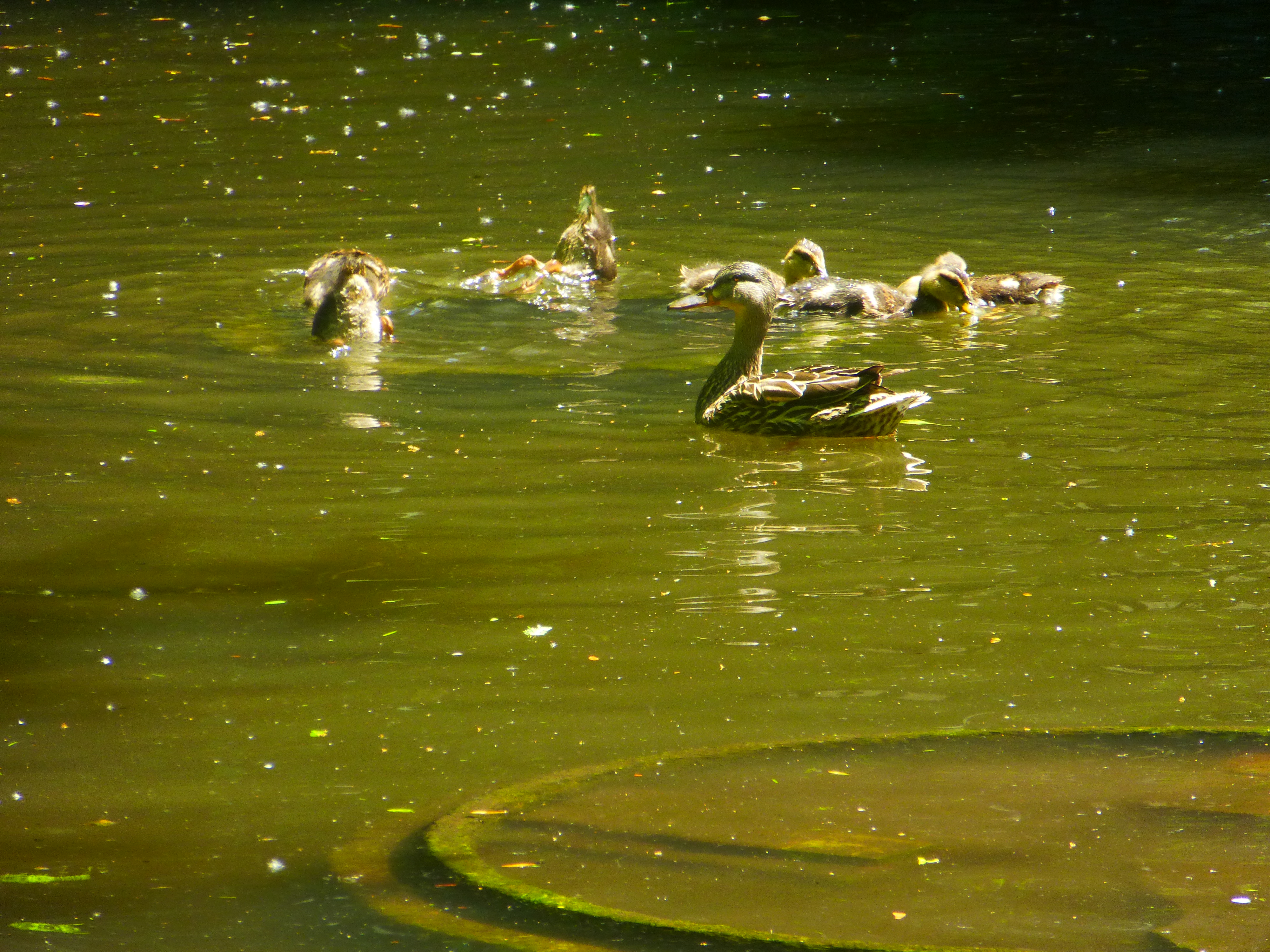 It is most adorable when the ducklings flap their stubby little wings (you can see that in the first video below): 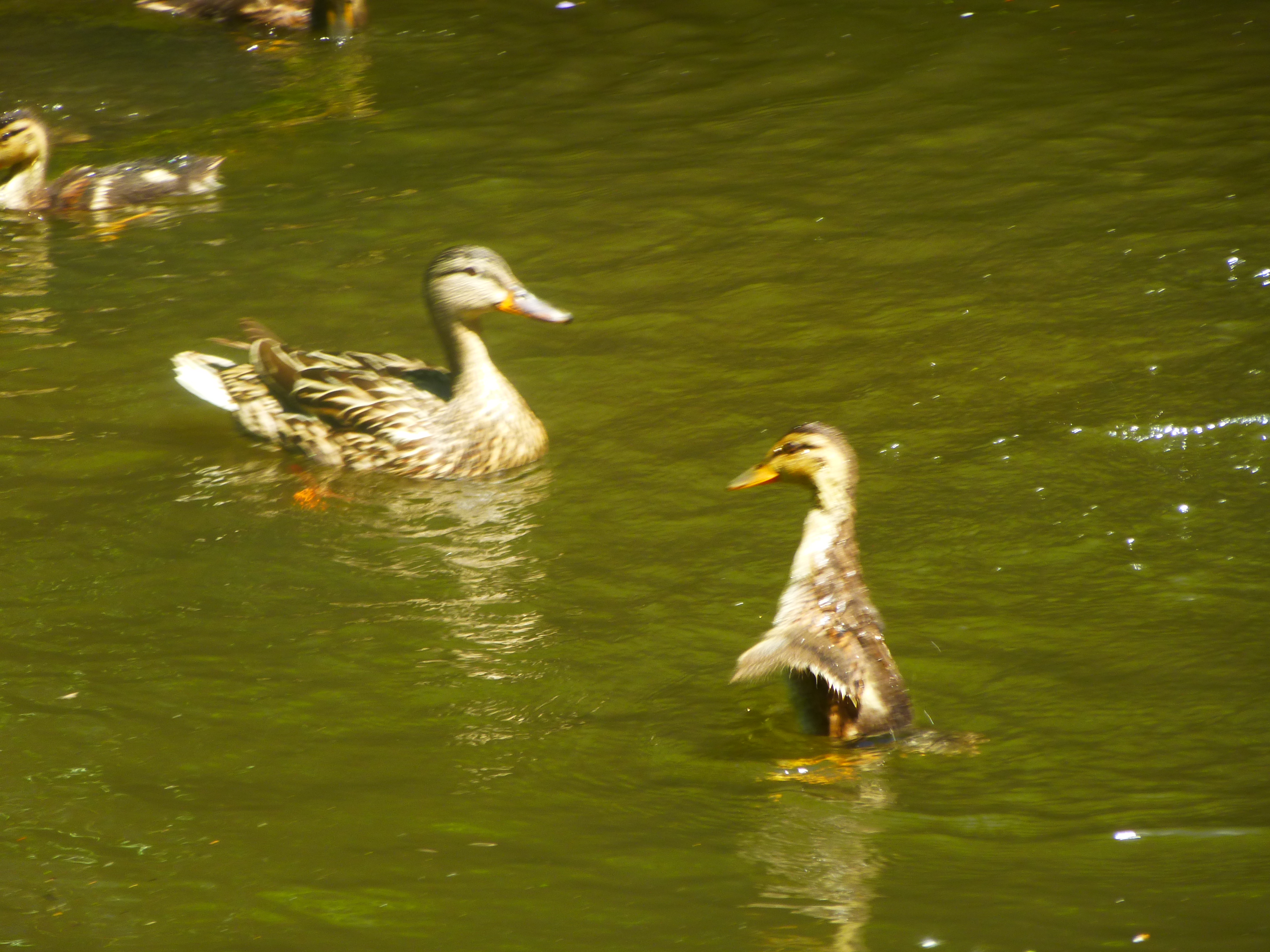 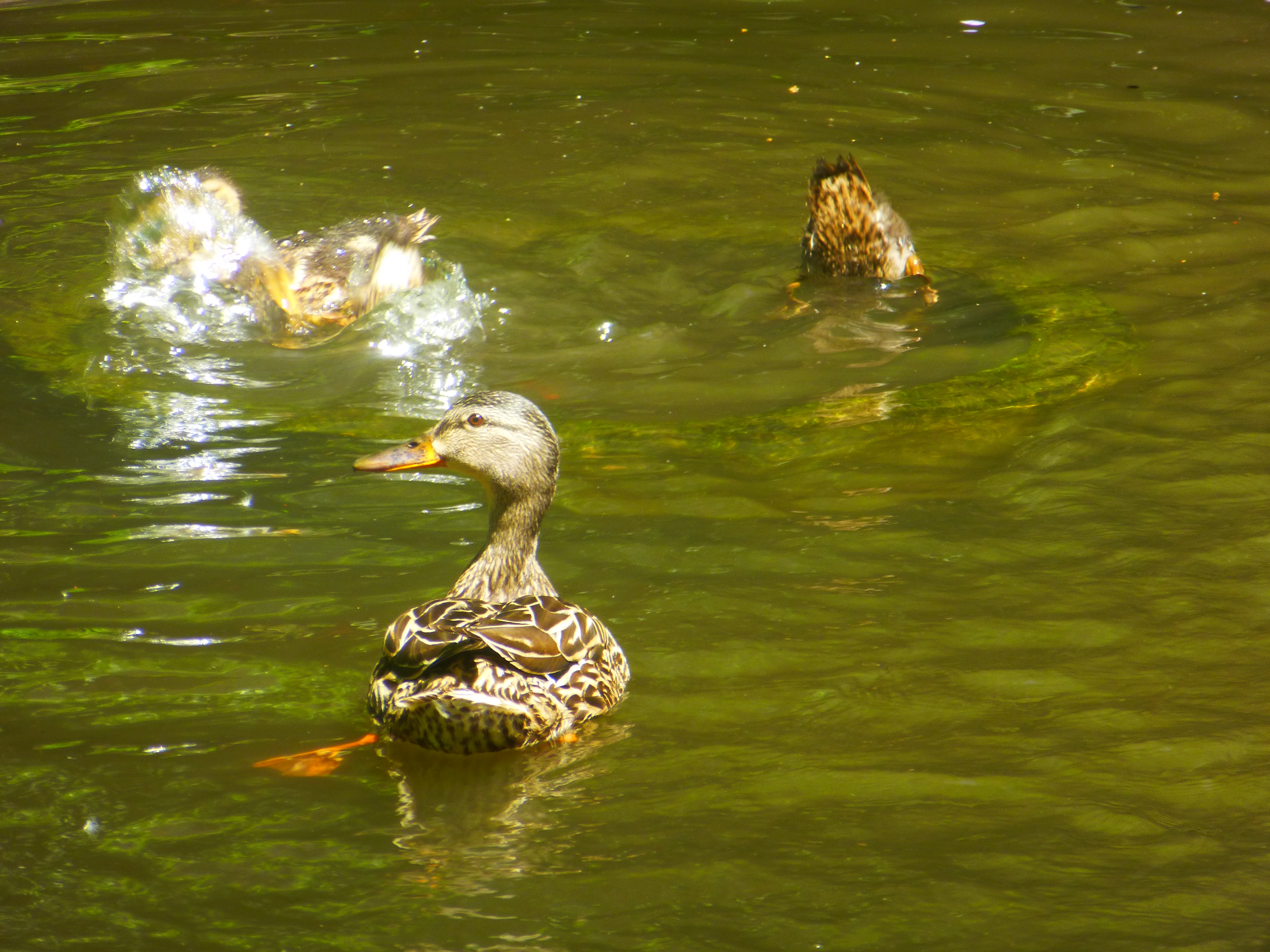 Mom is checking out the dabbles: 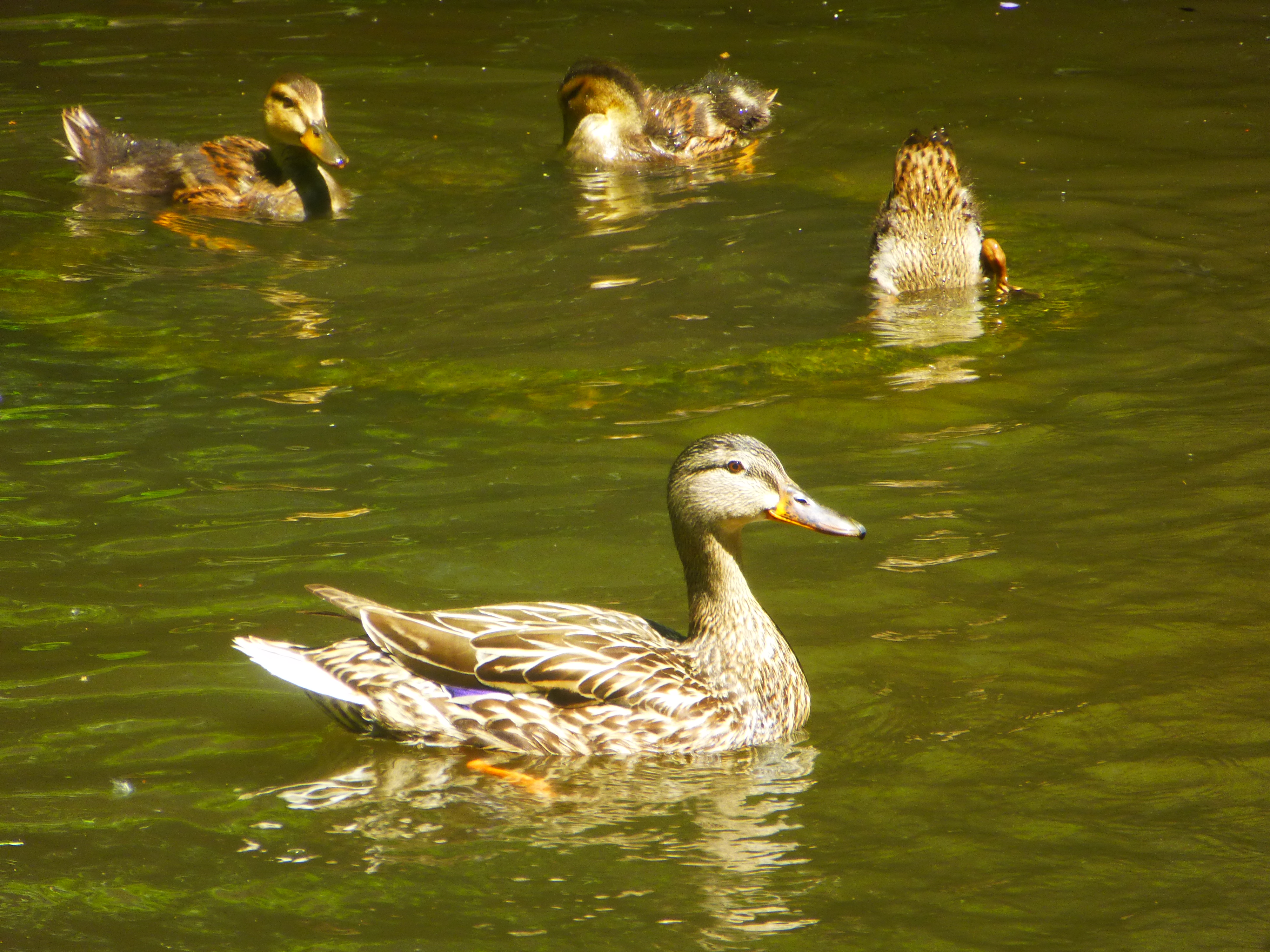 It gets frenetic out there. Sometimes the ducklings just take off swimming as fast as they can for no apparent reason. And they can swim fast! 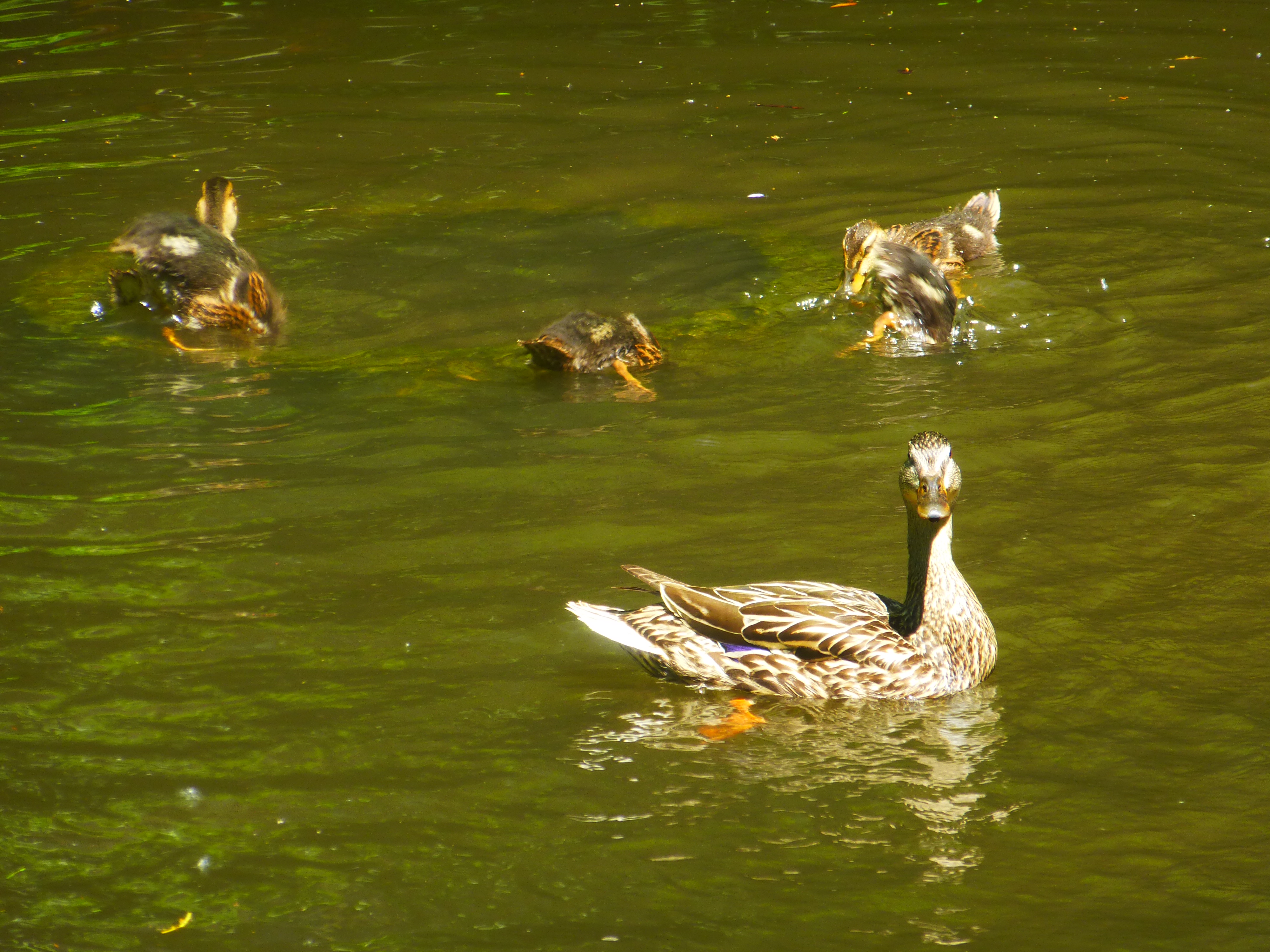 We love our ducks! 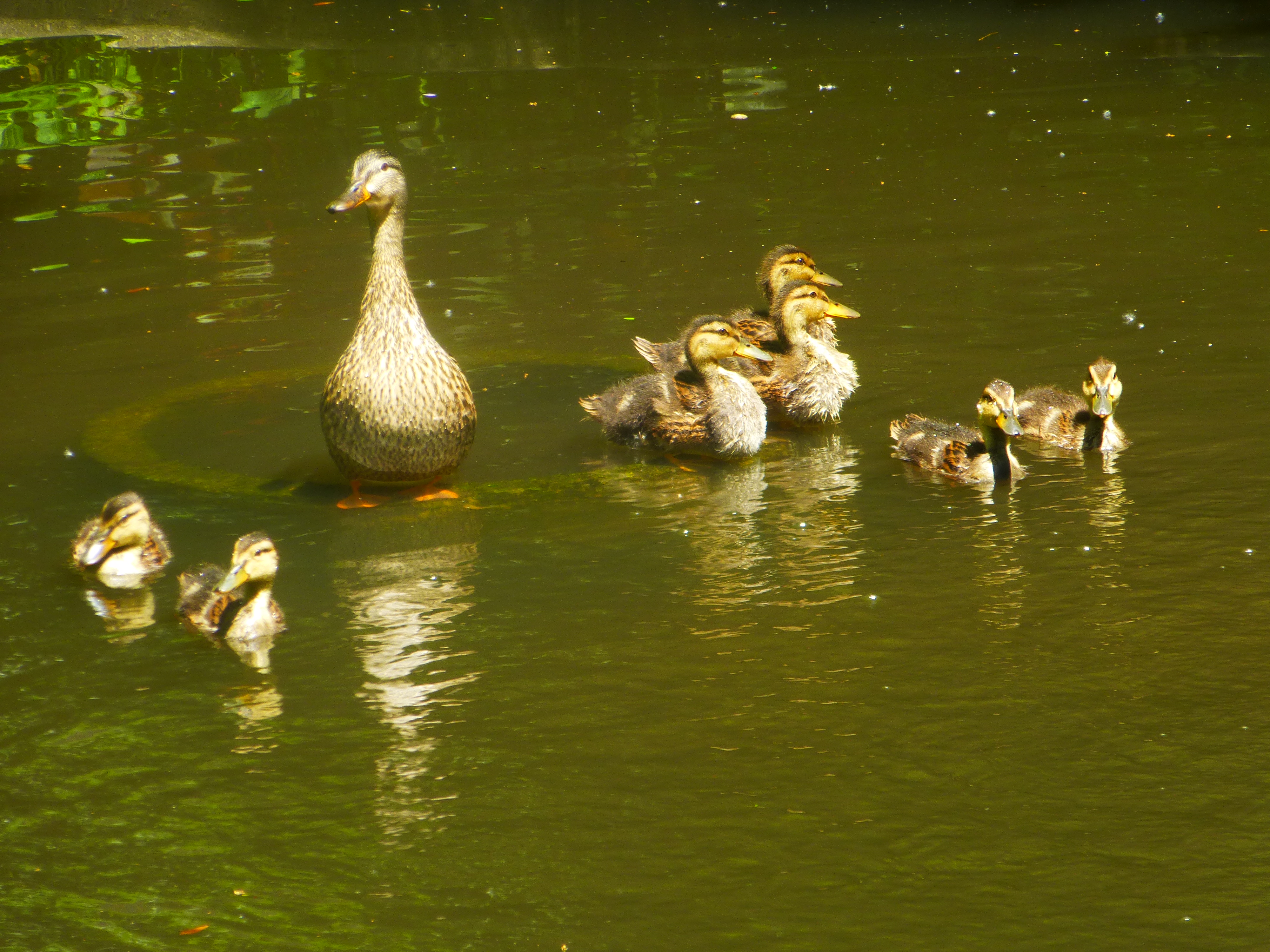 We mustn’t neglect the many turtles, who clean up any leftover duck food and also climb on anything possible to get more sun—including each other: 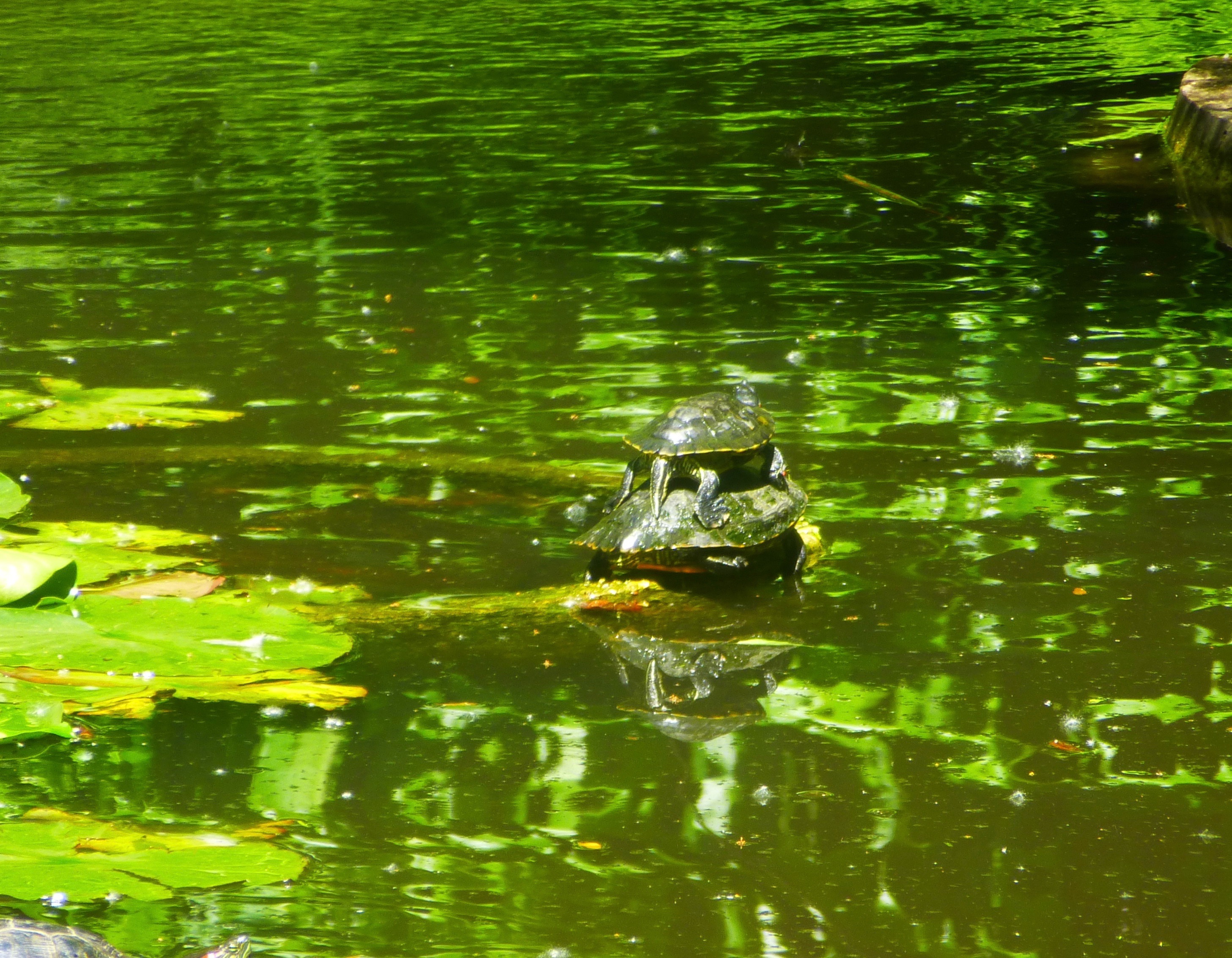 And the usual fight for space on the “duck” ramp: 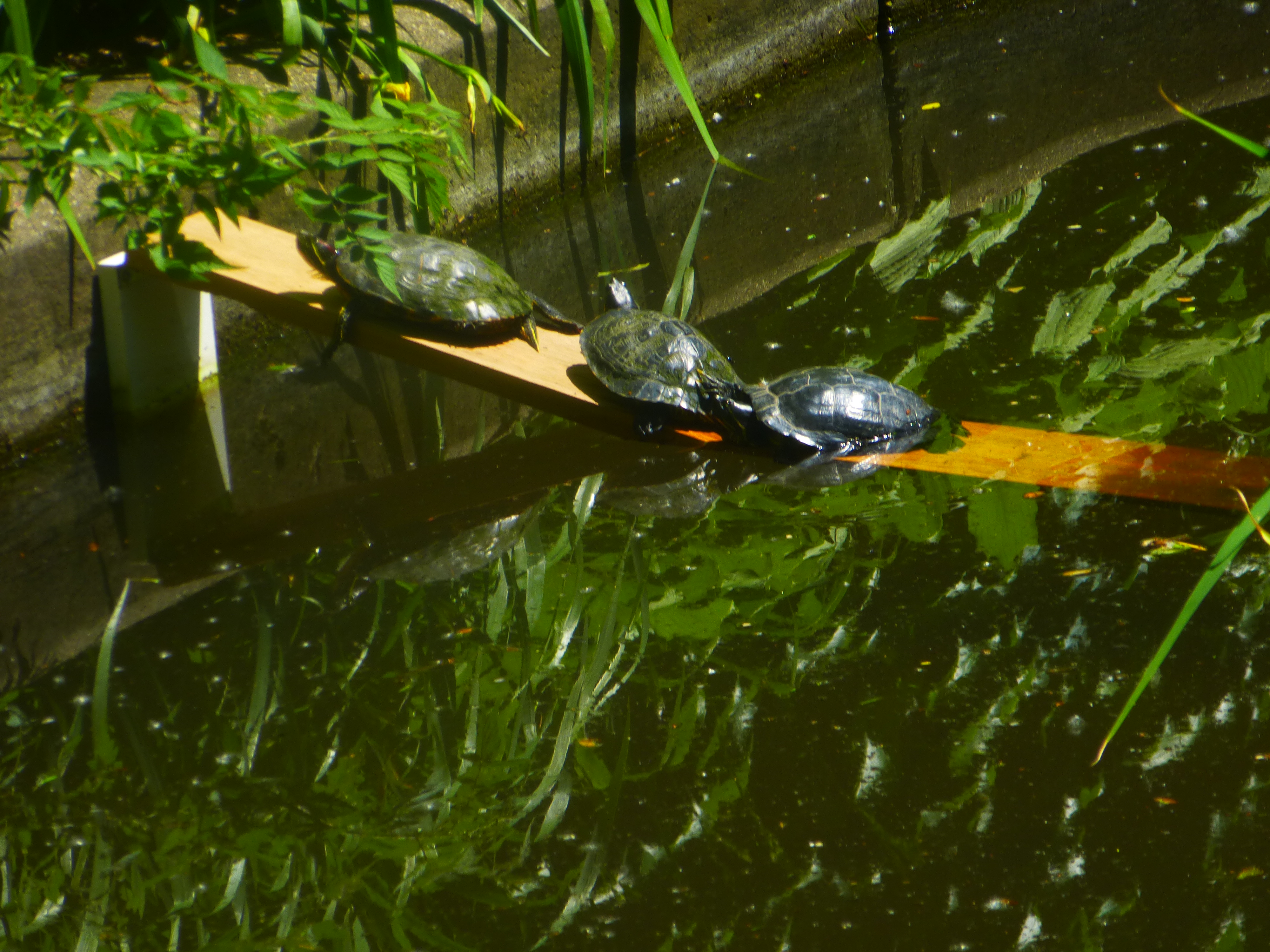 This video was taken by Anna just a few minutes ago. She is convinced (note video title) that the ducklings had a quantum leap in growth yesterday, so to her they appear much larger than they did yesterday. I’m dubious, but they are getting big! This shows bathtime after today’s feeding, and you can see why we love these ducklings so. Watch them dabble, pop underwater and resurface, and flap their little stubs of wings. It’s a delightful show, and they do it after every meal. Do watch this with the screen BIG.

This video was taken by Mr. Bill Dimitroff two days ago. He comes down here occasionally from Montreal and always checks on (and films) the ducks. Honey, the brood, and Frank are foraging in the grass, eating some corn we put down, and you can see Frank taking out after the ducklings. Like all mallards, a chase is preceded by a “head down” display. Fortunately, Frank never pecks or hurts the babies; he just wants their food.

Anna took this video of Frank yesterday. He was being sequestered in the small pond and fed copious noms so he’d stay away from the other pond, where I was feeding Honey and the brood.