Reader Tom Carrolan sent two sets of raptor images in April and May. I’ll put the second one up first: about the Norther Harrier. His captions are indented:

The Northern Harrier (Circus hudsonius) is a taxonomic issue. Recently divided from the European Hen Harrier (Circus cyaneus). From All About Birds: “Northern Harriers are fairly common, but their populations are declining. The North American Breeding Bird Survey records a steady decline of over 1% per year from 1966 to 2014, resulting in a cumulative loss of 47%, with Canadian populations declining more than U.S. populations.” They nest on the ground in freshwater and brackish marshes.

Males often have more than one nest active within their territory. At my outer Cape Cod hawk migration site, established in 1984 (Pilgrim Heights within the National Seashore), the male had three females on three nests. He defended the females from interlopers and delivered food two all his mates and offspring. One or two is common, with five nests and females, max.For North America, here are some images of this bird, where most birders would just like to see the adult male, known as the Gray Ghost.Heres an adult male, a composite, with a full crop, apparently having eaten within the last couple of hours! Observing this bulge is not uncommon for migrating hawks, but there are a few species for which this is uncommon: Harrier, Osprey/Bald Eagle, and others that eat soft food. That’s soft vertebrates (amphibians), inverts, fish. This bird has chowed down on something with hard volume, like a mammal… maybe an early chipmunk (7 April 2013). 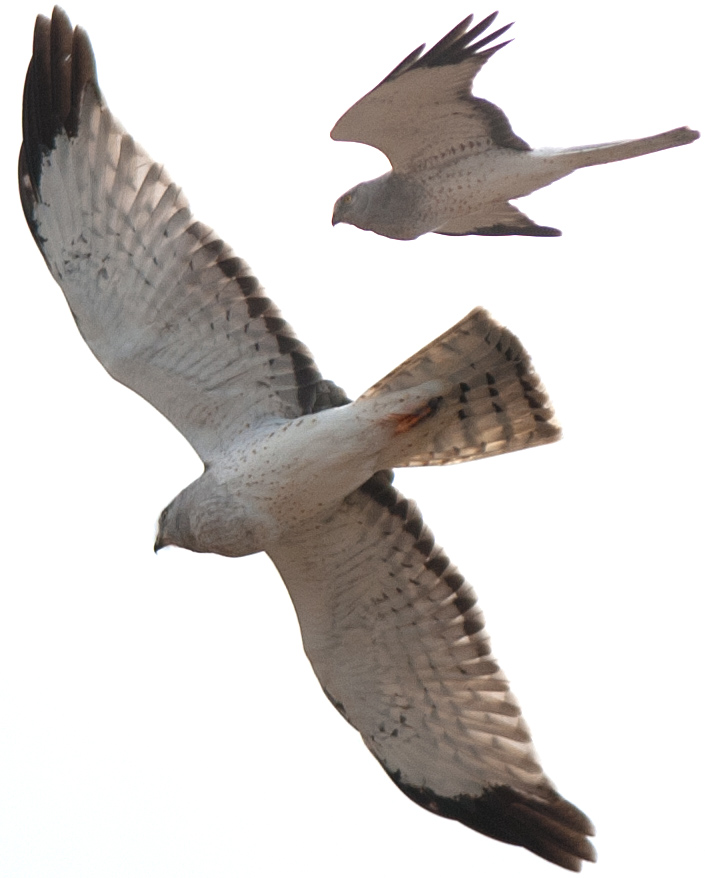 From my DigiBanding Project with Braddock Bay Raptor Research north of Rochester NY, here are a couple of immature Harriers. Both are shown in the project-required images: front and back with one wing extended.First here’s a young female with the dark iris beginning to turn to adult yellow. Young females have a dark iris. The central tail feathers have molted to post juvenile type. All our hawk tails molt from the central feathers outward. (18 April 2003)

All three of these images show juvenile orange tint. In the last Summer and beyond, birds of the year have this color, but it fades through the Winter. Another young female with a dark iris. (13 April 2003)

Here’s a recently hatched Harrier showing the juvenile orange breast coloration that will fade toward the next year. Also a full crop (2 September 2011):

Adult female Harriers have a well-streaked breast, and with age, will have grayer and grayer wings resembling the adult male. The adult female yellow iris is visible on the right. (07 March 2018 and 3 April 2015):

Every birder longs to see adult male Harriers. Here are a couple more. Males have a bright yellow iris color at all ages. (9 January 2012): 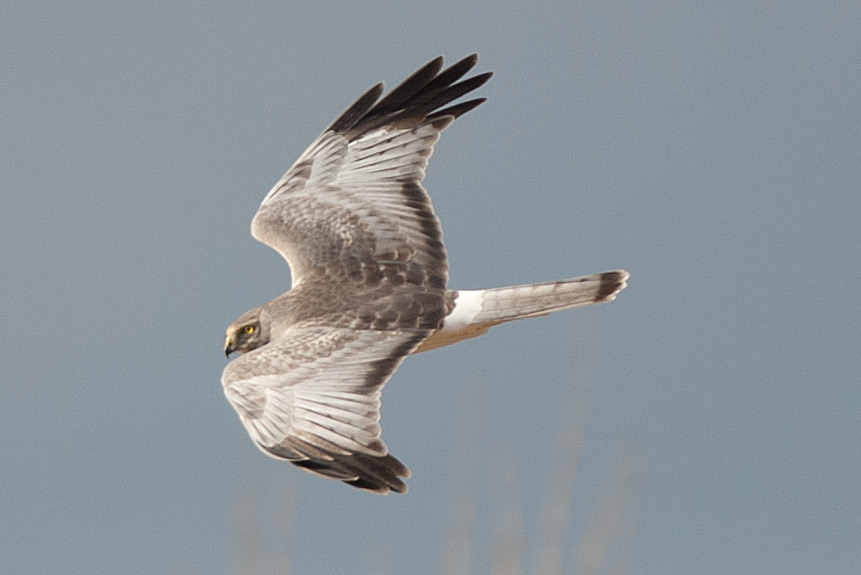 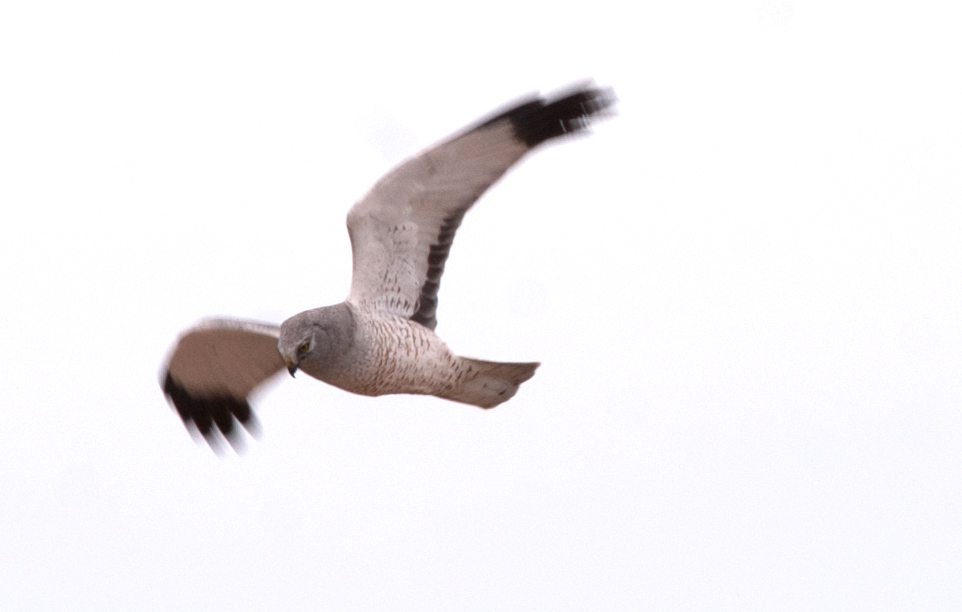 Late in the Spring migration, all manner of molt can be observed. Molt usual is timed to start on the home grounds. Here’s a late adult male Harrier, molting its first primary feathers enroute. (19 June 2010). 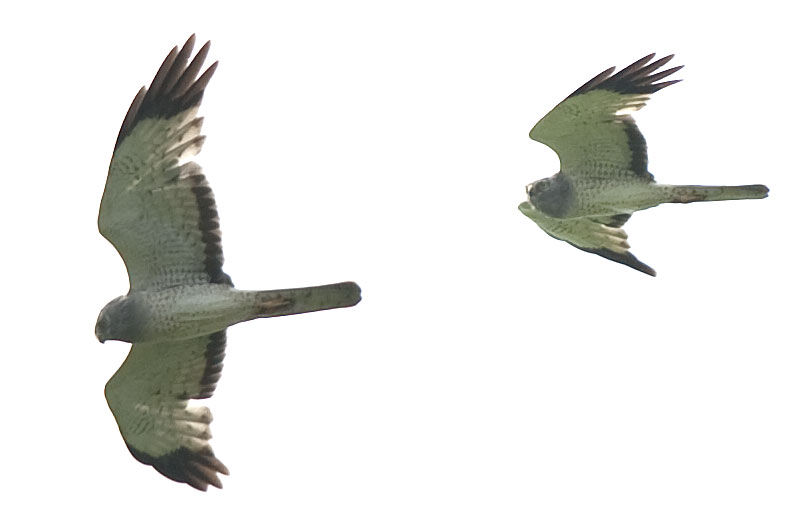 And last, here’s a young male Harrier, yellow iris, being pursued by a Red-winged Blackbird. In migration. The blackbird actually hit the hawk a couple of times. (13 March 2011): 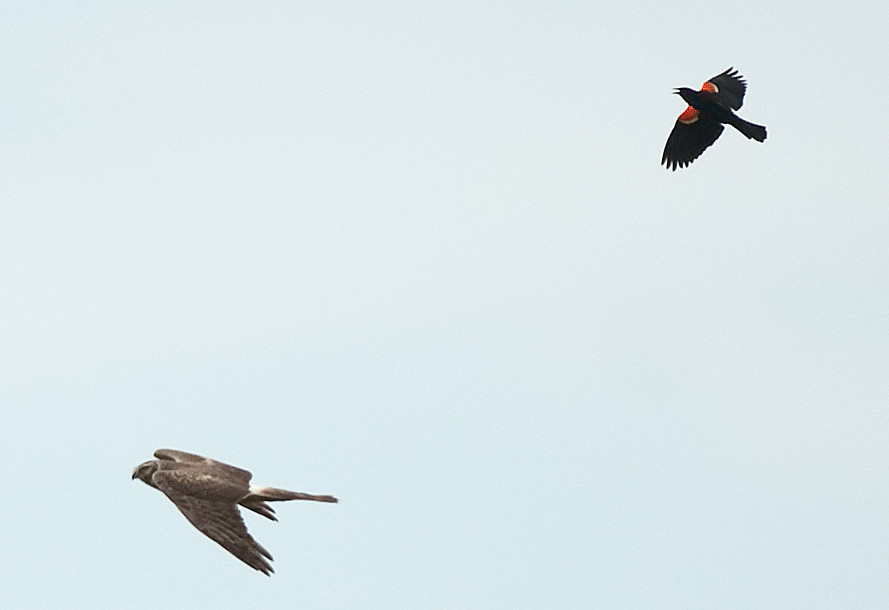