Grania sent me this tweet by Nicholas Christakis, who, with his wife Erika, was involved in Yale’s Great Halloween Costume Debacle. The part on the left I knew: yes, colleges, to save money, are increasingly farming out instruction to adjuncts and part-time professors, who receive a pittance (and no benefits) for their work. But the part on the right, about the University of Michigan’s bloated diversity staff, was new to me. I decided to check it out.

A play in two acts in my twitter feed today. Universities are shifting resources from faculty to administrative staff of all kinds. pic.twitter.com/prvf63p5HI

And yes, as you can read at Intellectual Takeout—which appears to be a conservative site,—the story is true. This information has been published widely, and you can check it as the salaries and employees are public information.

First, there’s a graph of how college costs have risen precipitously in the last twenty years. 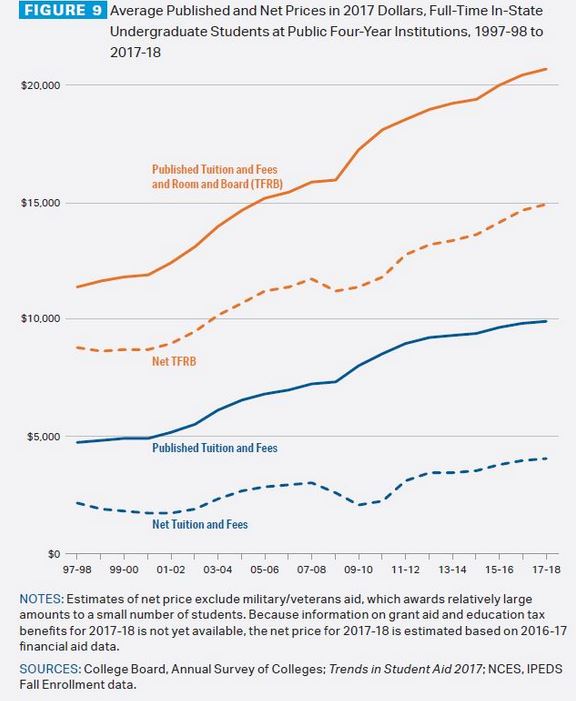 There are various reasons for surging costs, but the primary one is the remarkable expansion of university administration in recent decades. As Paul Campos, a law professor at the University of Colorado, wrote in the New York Times a few years ago:

“According to the Department of Education data, administrative positions at colleges and universities grew by 60 percent between 1993 and 2009, which Bloomberg reported was 10 times the rate of growth of tenured faculty positions.

One reason for an expanding administration is the enforcement of in loco parentis policies, as well as having a staff to deal with diversity issues. That’s not in itself bad, but diversity staffs, staffs dealing with “bias reports”, and so on, can get bloated. The one at the University of Michigan seems to have gotten out of control. As the article states:

Universities are large and require administrators to function, of course. The problem is there seems to be no end to the expansion. This point was recently illustrated by Mark Perry, an economics professor at the University of Michigan-Flint. [JAC: he’s also Faculty Affiliate, Women’s and Gender Studies Program, at UM Flint.]

Perry, who also is a scholar at the American Enterprise Institute, used the University of Michigan as an example to highlight the rise of “diversicrats” (diversity bureaucrats) on today’s campuses. The numbers are astonishing.

2. More than one-quarter (26) of these “diversicrats” earn annual salaries of more than $100,000, and the total payroll for this small army is $8.4 million. When you add to cash salaries an estimated 32.45% for UM’s very generous fringe benefit package for the average employee in this group (retirement, health care, dental insurance, life insurance, long-term disability, paid leave, paid vacation, social security, unemployment insurance, Medicare, etc.) the total employee compensation for this group tops $11 million per year. And of course that doesn’t count the cost of office space, telephones, computers and printers, printing, postage, programs, training, or travel expenses.

Here are all the 93 employees’ salaries; you can verify Sellers’s salary here.

The highest salary, though, isn’t really higher then Trump’s. As President, The Donald earns $400,000 per year, and vice-Provost and Chief Diversity Officer Sellers is short by $3,450. If you include fringe benefits, his salary would rise above $400,000, but of course Trump gets fringe benefits like free housing, food, and medical care.

How many students could that $11,083,521 support? Here’s what it currently costs to attend the University of Michigan (click on screenshot to go to the page):

Diversity is a worthwhile goal of colleges, so long as it’s not just diversity of pigmentation, but also diversity of ideas, of politics, of social class, of background, of income, and so on. But 93 people ensuring that diversity at a single college seems way too much for me. Something’s gone wrong at the University of Michigan.

47 thoughts on “The University of Michigan’s “Diversity staff” comprises nearly 100 full-time employees, with a budget over $11 milliion”