Posting will be light today as I’m a bit under the weather and can’t brain. In the meantime, enjoy the latest edition of Jesus and Mo, called “fail”: 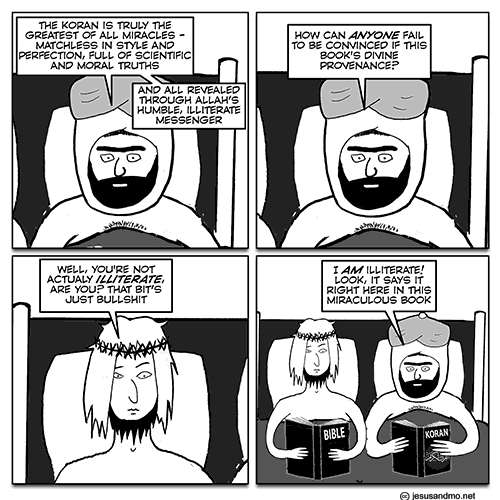 Well, I’ve often wondered, because Hitchens proclaimed it repeatedly, whether Muhammad really was illiterate.  One counterargument is provided by the website Radical Truth (the “T” in “Truth” is a cross), which is a Christian site apparently devoted to convincing Muslims of the Resurrection. Take what’s below, then, with a grain of salt (there are other arguments), but this Sura of the Qur’an does indeed claim that Muhamed was “unlettered”:

Muslims claim that because Muhammad was illiterate, he could not have written the Qur’an, and thus the Qur’an is a miracle, Muhammad’s primary miracle. This idea of illiteracy is supported in the Qur’an:

Sura 7:157: “Those who follow the apostle, the unlettered Prophet, whom they find mentioned in their own (scriptures), – in the law and the Gospel…

Sura 7:158 –  Say: “O men! I am sent unto you all, as the Apostle of God, to Whom belongeth the dominion of the heavens and the earth: there is no god but He: it is He That giveth both life and death. So believe in God and His Apostle, the Unlettered Prophet, who believeth in God and His words: follow him that (so) ye may be guided.”

Thus, the Qur’an’s very existence is testimony to Muhammad’s status as a prophet. There are a couple of problems with this position.

First, it is doubtful that Muhammad was illiterate. Recall that when he was being raised by his uncle, he traveled as a merchant, delivering supplies to various communities. He also traveled extensively with his first wife Khadijah, who hired him to help her with her trade business. Surely there must have been some sort of written record kept to document these transactions. The merchant trade cannot exist without written records of what and how much was shipped to whom.

Second, Muhammad’s illiteracy is irrelevant to the question of the existence of the Qur’an. Muhammad did not write the Qur’an; he recited it. Others wrote down what Muhammad recited, as the Qur’an was complied over several years. The Qur’an would have been written whether Muhammad could or could not read and write, so the argument is irrelevant.

There are other arguments, too. I can’t be arsed to analyze them, as the whole scenario of an angel reciting the Qur’an to Muhammad is ridiculous.