Professor Ceiling Cat (Emeritus) is back doing Hili, but readership and comments seem to be low, and I’m wondering how long I can sustain the will to do this. I will soldier on at least temporarily.

My heart is heavy this morning, as my brief visit to the pond revealed the arrival of yet another mallard drake (there are two besides Frank now) and no sign of mom and ducklings. I will do the feeding and a closer inspection later; I hope fervently that mom and ducklings are hiding somewhere, although I don’t know how they’d get out of the pond. But I will ensure the “duck island” is put in shape today in case of future ducklings.

It’s May 20, 2018, and a cold and cloudy Sunday in Chicago, with the high temperature predicted to be only about 50°F (10°C) . It’s National Quiche Lorraine Day (I’d prefer a cassoulet), as well as World Metrology Day (not misspelled) and World Bee Day (the birthday of the pioneer of beekeeping.

Today’s Google Doodle celebrates the first atlas of the world, published on this day in 1570: Theatrum Orbis Terrarum, or Theatre of the World. As Forbes notes,

. . . [it] was a novel concept in the late 16th century: a book of maps, all the same size, organized geographically.

It was the work of cartographer Abraham Ortelius, who collected the maps, added his own notes, and had the book printed from specially-engraved copper plates. It contains one of the earliest allusions to what would later become the theory of continental drift, and it’s full of the names of the leading scientists and cartographers of the late sixteenth century – people like Gerardus Mercator, whose method of representing the round globe on a flat map is still in use today. Ortelius did almost none of the actual surveying or drawing for the maps in his book; his role was to bring them all together with descriptions and references. So he cited the names of the 33 cartographers whose work he used – another first, in a period when rules about plagiarism would horrify most college professors today. He also included a list of 54 more professional cartographers.

On May 20, 1498, the Portuguese explorer Vasco da Gama found the sea route to India from Europe, arriving at Calicut, a city in Kerala. On this day in 1609, Shakespeare’s sonnets were published by Thorpe; Wikipedia adds “perhaps illicitly.”  In 1873, two Jewish men, Levi Strauss and Jacob Davis, got the U.S. patent for blue jeans with copper rivets. The rest is history: I suppose I’ve worn them about 95% of the days of my life since my junior year of college. On May 20, 1883, the volcano Krakatoa began its infamous eruption, culminating with an explosion on August 27 that killed over 36,000 people.  On this day in 1932, Amelia Earhart took off from Newfoundland on the first successful solo crossing of the Atlantic by a woman pilot. She landed in Ireland on May 21.  On this day in 1940, the first prisoners arrived in the concentration camp of Auschwitz. Exactly 16 years later, the first airborne hydrogen bomb was dropped by the U.S. in a test over Bikini Atoll in the Pacific. Here’s a video.

On May 20, 1964, Robert Wilson and Arno Penzias discovered the cosmic microwave background radiation—the echo of the Big Bang. Both men were awarded the Nobel Prize for Physics in 1978.  On this day in 1989, the Chinese government declared martial law in response to pro-democracy demonstrations, culminating in the Tiananmen Square massacre, with protests lasting until June 4. Finally, on May 20, 1983, a team of scientists led by Luc Montagnier published a paper in Science revealing the discovery of the human immunodeficiency virus (HIV). Montagnier, along with  Françoise Barré-Sinoussi and Harald zur Hausen, received the Nobel Prize for Physiology or Medicine in 2008, while Robert Gallo, who fought fiercely for credit (and probably deserves some) got nothing.

Meanwhile in Dobrzyn, the Princess gave us a scare:

A: Have you converted to vegetarianism?
Hili: No, I still live according to nature, but grass helps the digestion. 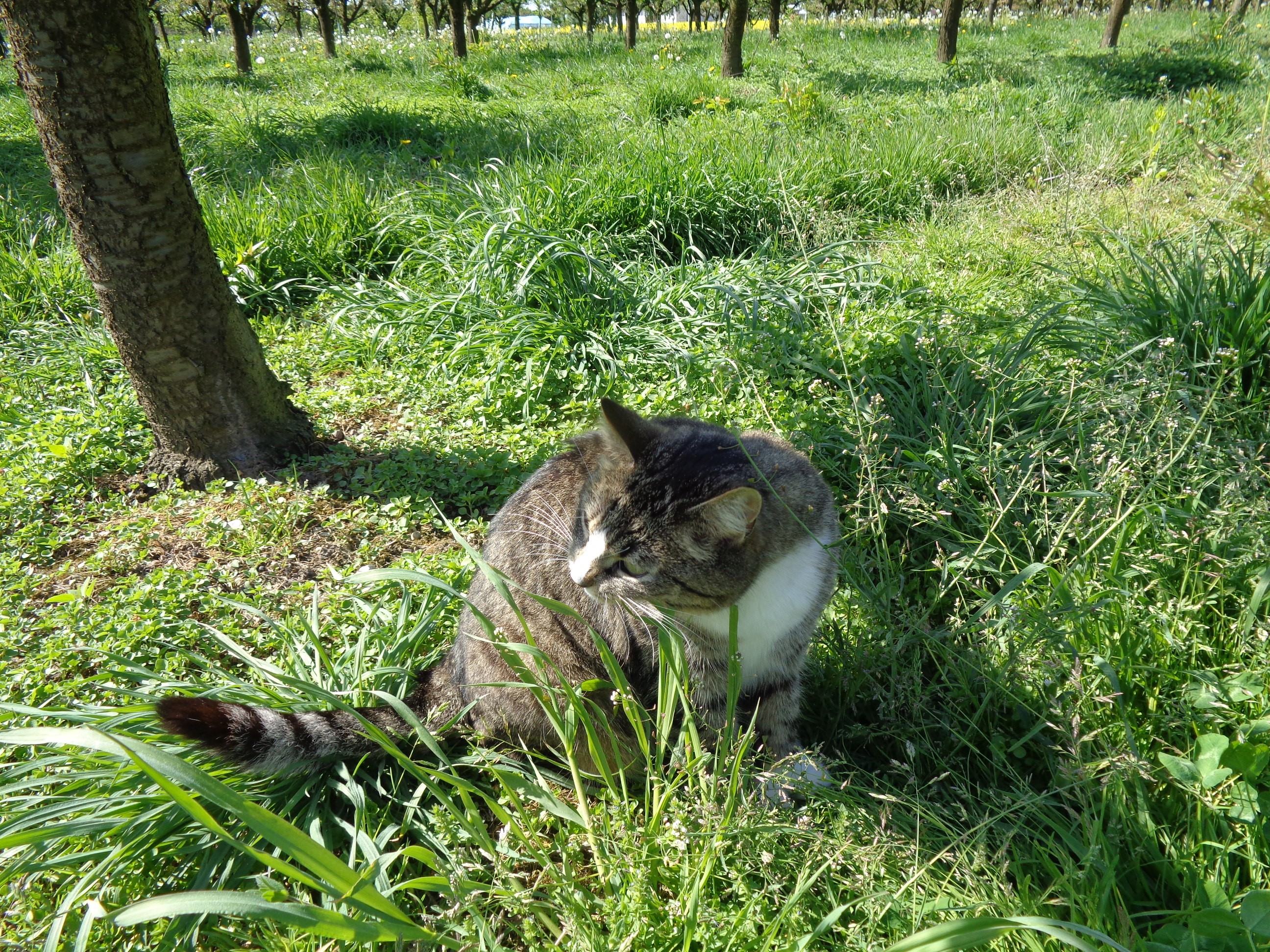 And spring is firmly ensconced in Winnipeg, where Gus has just been given a new catnip plant. Here he looks pretty baked: 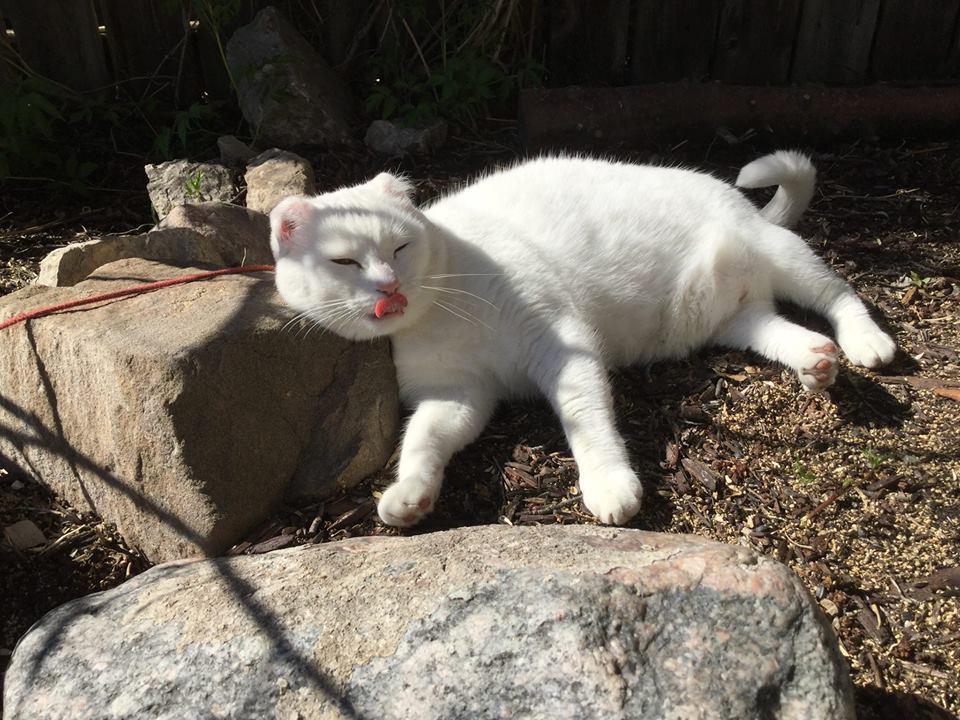 Some tweets from Matthew. Have a gander at this lovely grasshopper, which looks as if it were made of steel:

A heron surfing on a hippo!

A rare artist who could actually draw a cat accurately:

Two paintings now by French artist Olivier Violin. I’ve just found out he paints cats as well as Landscapes. Personally I like his signature. Cats well painted too. pic.twitter.com/lAarXZUt7w

And the world’s most graceful cat. LOOK AT THIS VIDEO!

This video claims the whale is “thanking” its rescuers for freeing it from a fishing net, but of course that’s pure speculation:

People chased this whale for hours to save him from a fishing net — and when he realized he was free, he thanked them in the BEST way 🐋💞 pic.twitter.com/qapZusvroK

I’m not sure what mayhem ensued here:

Matthew wants us to know about this important scientific advance in cat research:

3-mercapto-3-methyl-1-butanol
It's the onion-like off odor in beer & key aroma in male cat feces.
You're welcome.https://t.co/srylEgYyj7

Reader Gethyn tells us about the spread of domesticated cats from their origin in the Middle East:

You can find house cats on every continent except Antarctica. But that wasn't always the case. Here's how cats spread across the world https://t.co/qDVylRrp5H pic.twitter.com/PtxozgGKde

And from Grania, interspecies (or inter-object) love:

Emma Thompson was supposed to be talking about the new BBC production of "King Lear" that she's starring in.
She really, really did not want to talk about the Royal Wedding.
Guess she will not be donning a fascinator on Saturday: https://t.co/01VxqUL3D7 pic.twitter.com/meKGpDCIAg