So I’ve had ten of the eleven meals I planned, having been knocked out one day by what the French call a “crise de foie.” But I’m back in fighting trim, and consumed a final repast at Chez Denise, a perennial favorite, and, since I ate here the day I arrived, this gives the trip a pleasing symmetry.

I stayed in the hotel much of the morning as I had to reserve a free Economy Plus seat by phone 24 hours in advance of the flight (I’m now in a tier of United Airlines that gives me this one meager benefit), and I got a good seat, on the aisle and with extra leg room. Then off to Les Halles for lunch.

On the way we passed the buildings of the famous Samaritaine department store complex, the four of them built between 1910 and 1928. The store went out of business in 2005, but of course as an architectural gem they can’t destroy the buildings. They will be repurposed for other uses. Here are two of the buildings under renovation. 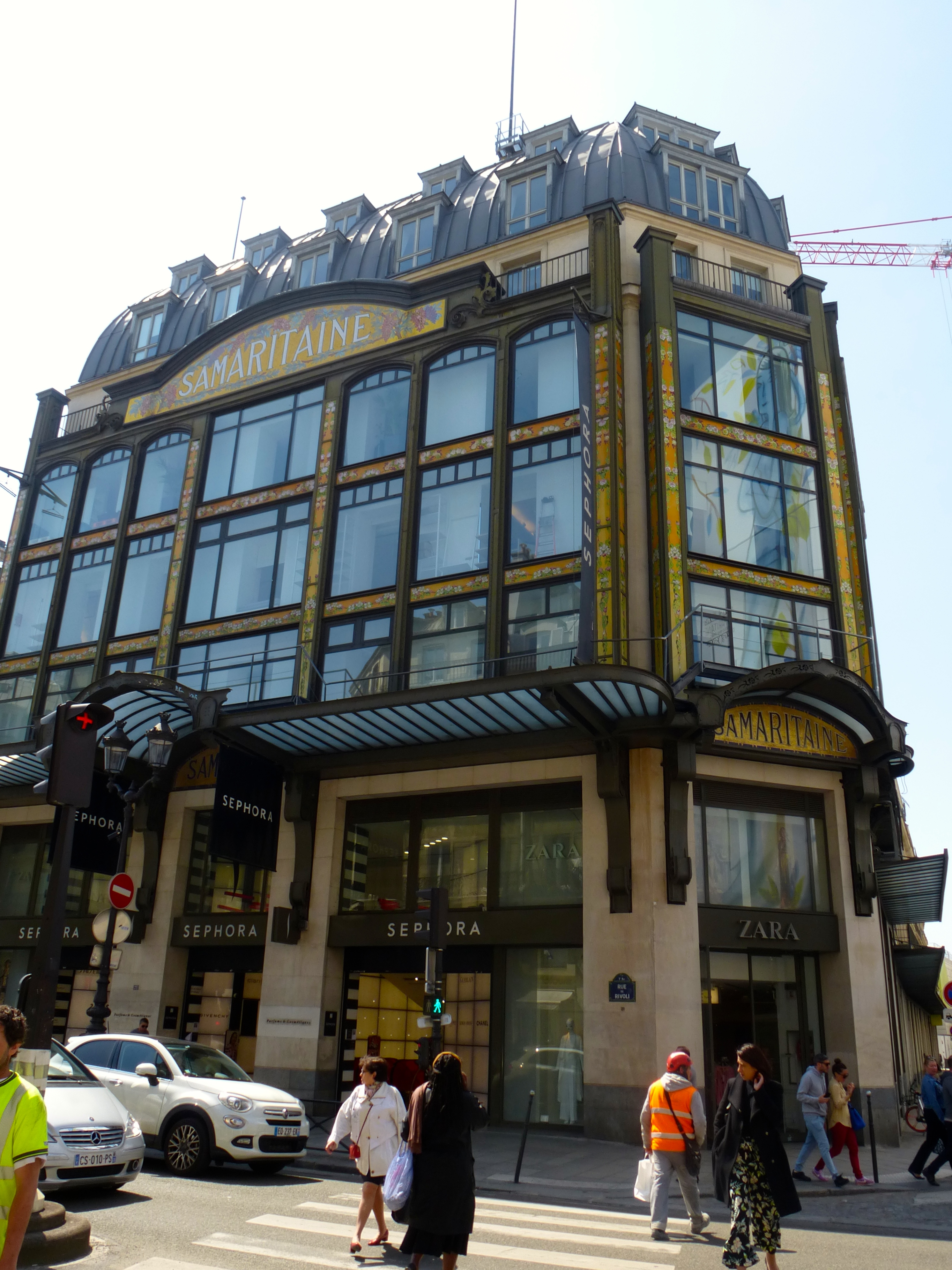 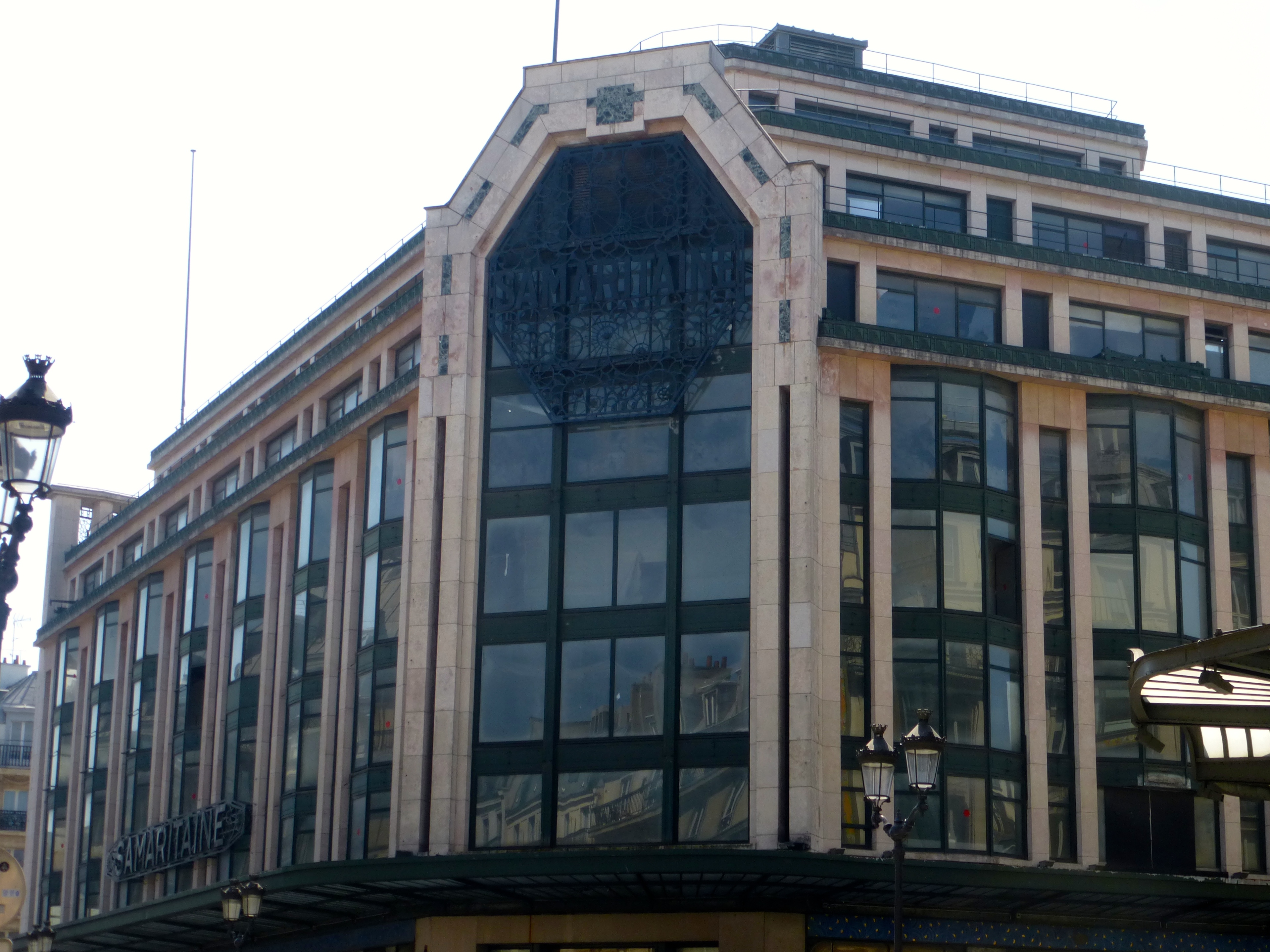 In the park that replaced the original Les Halles—a huge and now-defunct wholesale food market called “The Belly of Paris”—a group of school kids did some impromptu dancing to the music from someone’s phone: 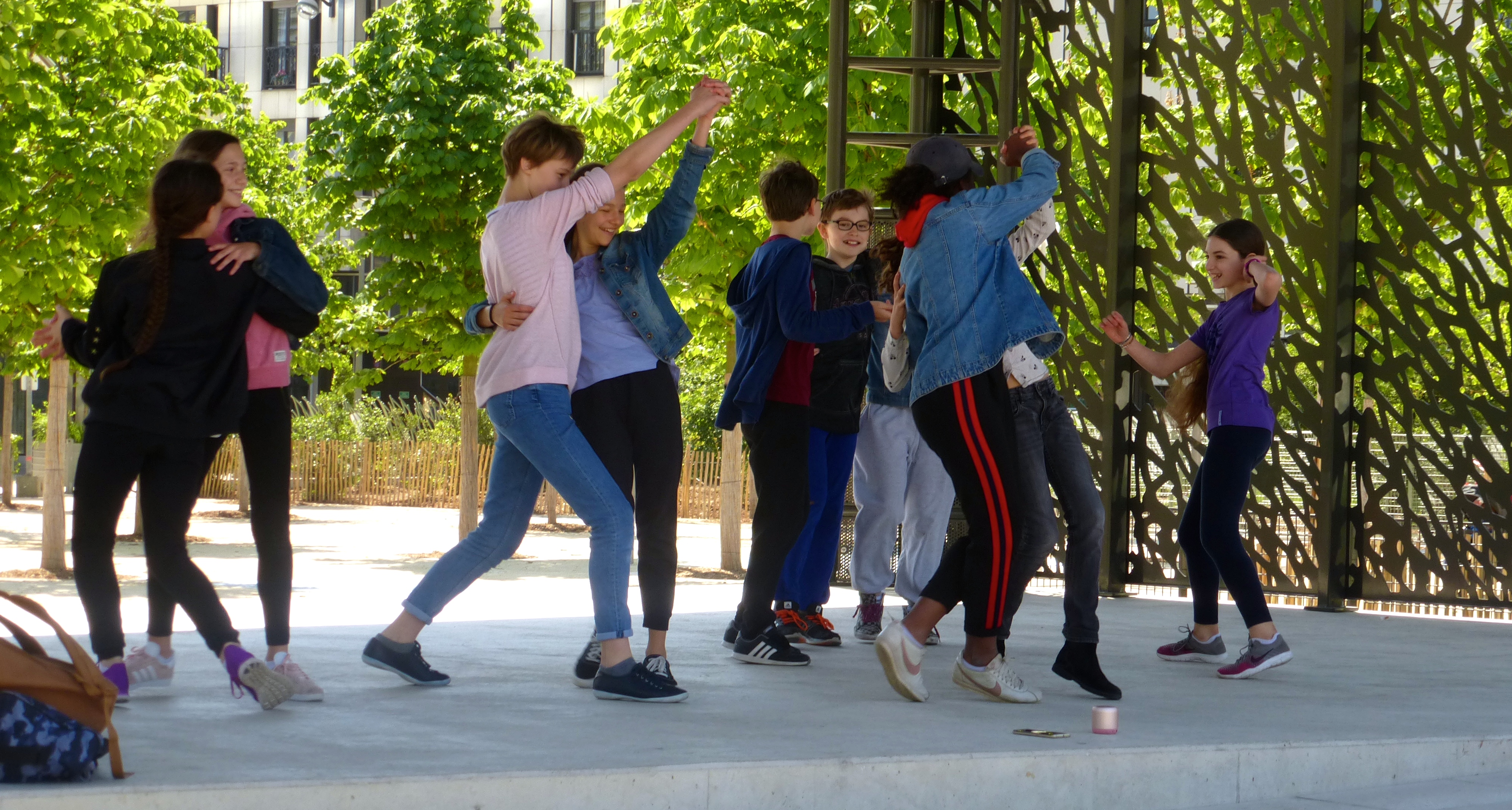 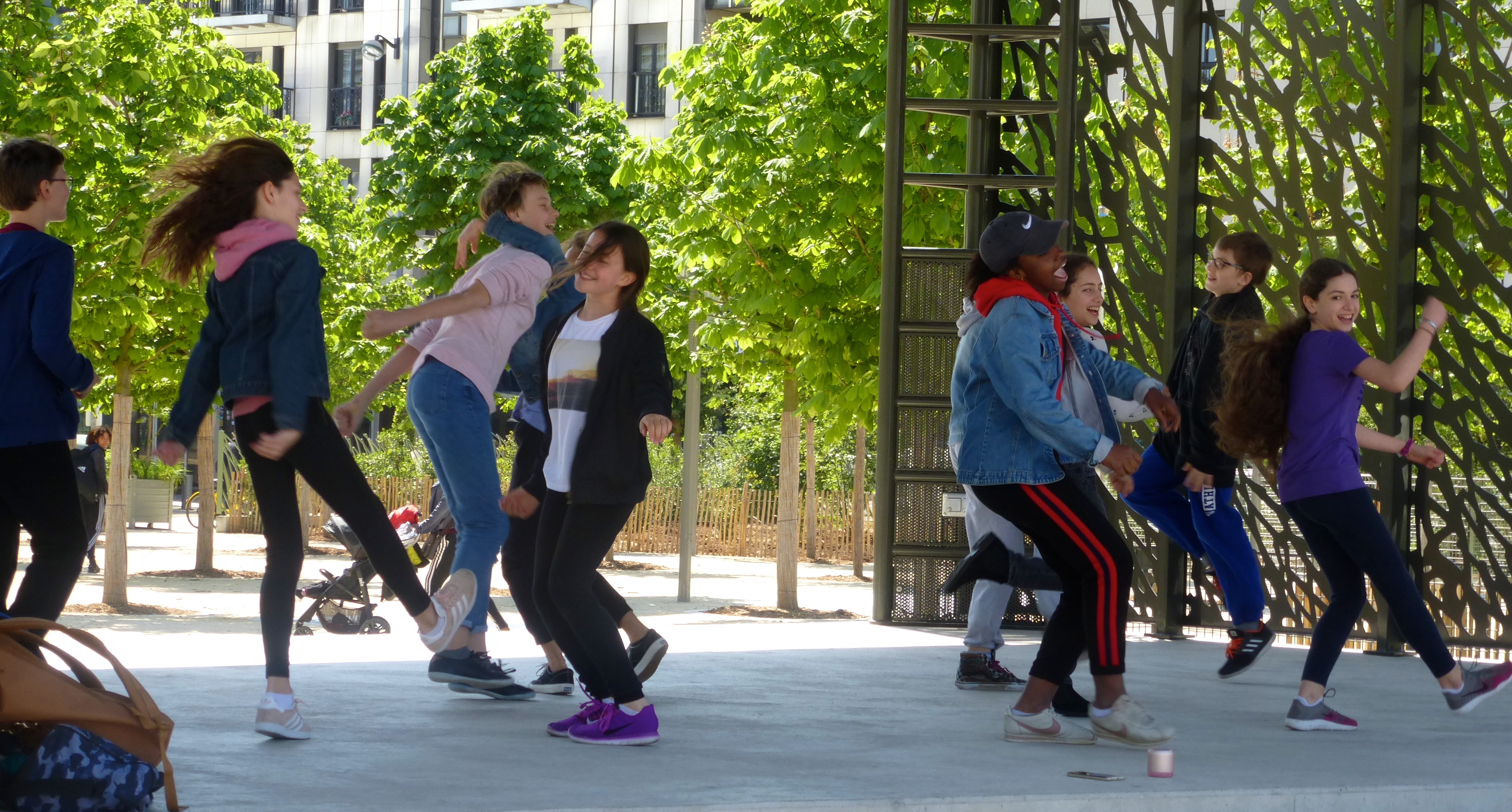 I visited Les Halles on a family trip when we lived in Germany (my dad was in the Army), and it was something to see. But the market was demolished in 1971 and the wholesale food operation moved to the suburb of Rungis.

In a nearby church, St.-Eustache (built 1532-1632), you can find, among the altars showing Jesus and scenes from the Bible, this lovely diorama: “The Departure of Fruits and Vegetables from the Heart of Paris on the 28th of February, 1969,“by Raymond Mason. It’s a sad testimony to the renovation of Les Halles, which never regained any true Parisian spirit. Even today it’s a soulless series of bland emporia and mediocre restaurants, with a park that draws many homeless people.

But the altar is a refreshing change from the usual Catholic shrines: 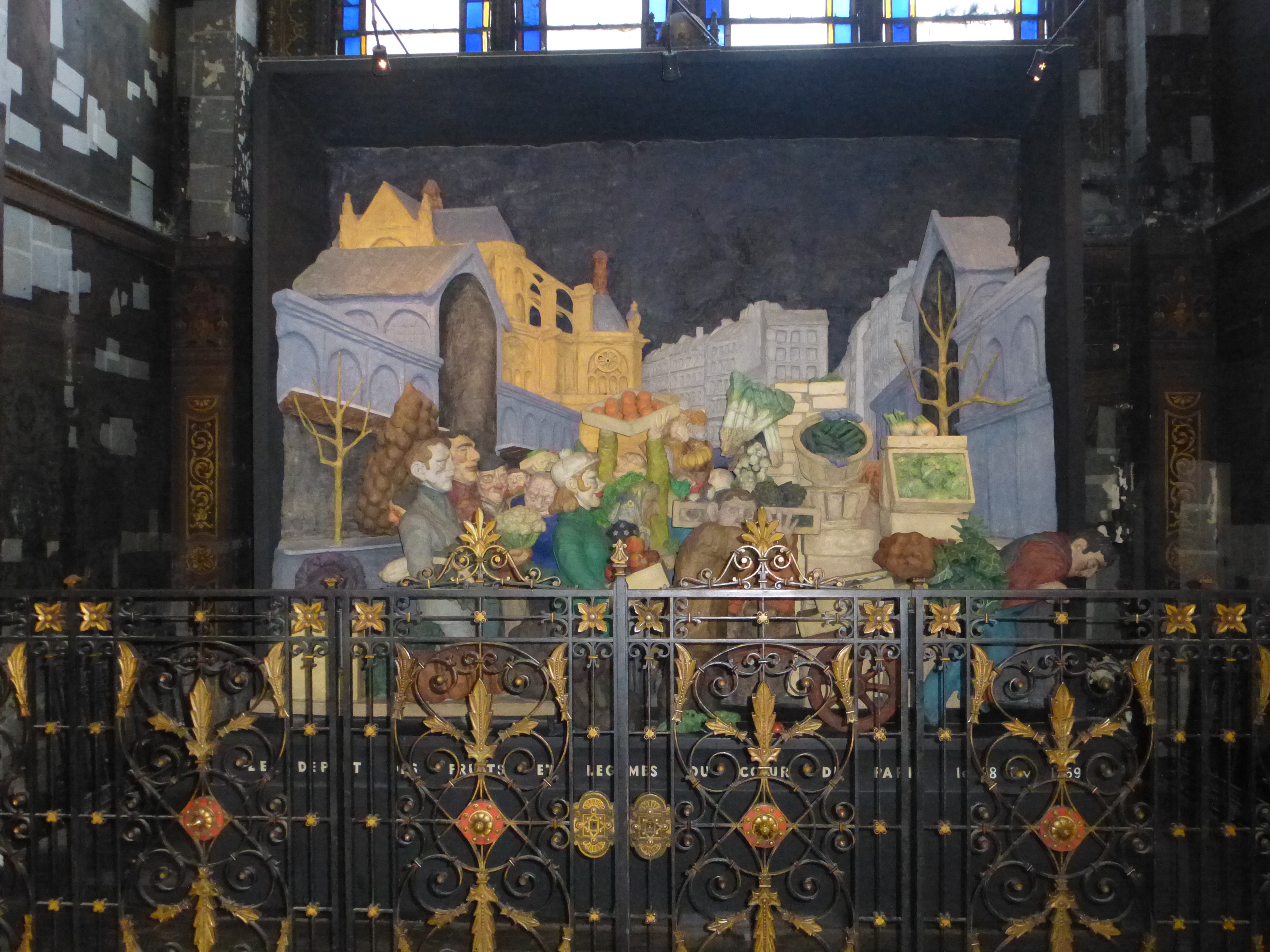 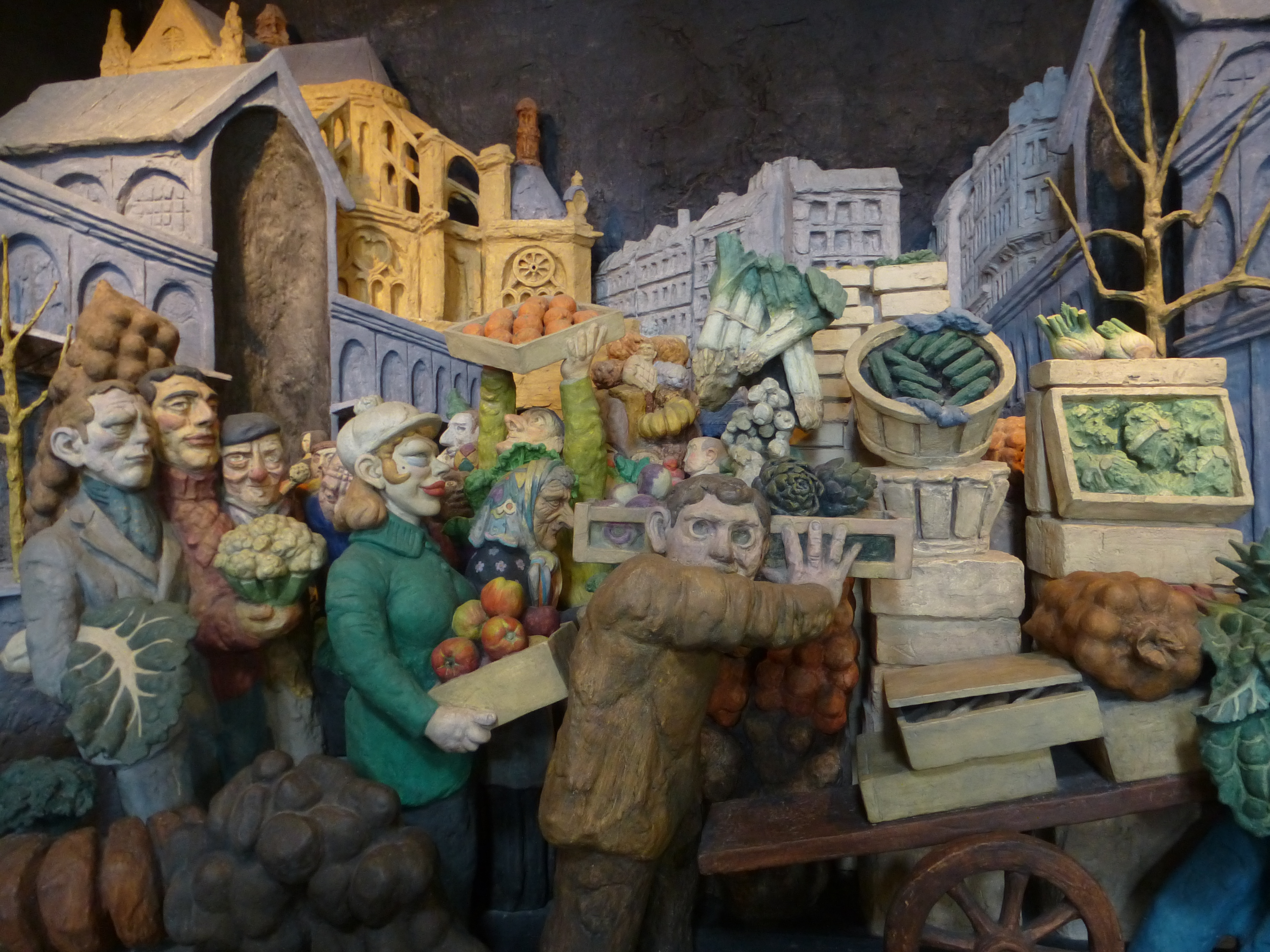 Right across the park is Chez Denise, my favorite “Parisian” Paris bistro, and one that is exactly the same as when I first ate there in 1989. Most of the menu is identical, the waiters are older and crack jokes, and the clientele is well fed and happy, knowing they’ll get a terrific and copious meal there—inches away from other diners—at a good price.

The tables are close together, and sometimes you have to share a table with strangers. But they don’t remain strangers for long. I’ve never been there when I haven’t had a conversation with the next table, whether French or tourists. And I’ve never had a bad meal there. Ever. One concession to modernity: the restaurant is no longer open 24 hours a day, but of course I don’t stay up and dine at midnight. 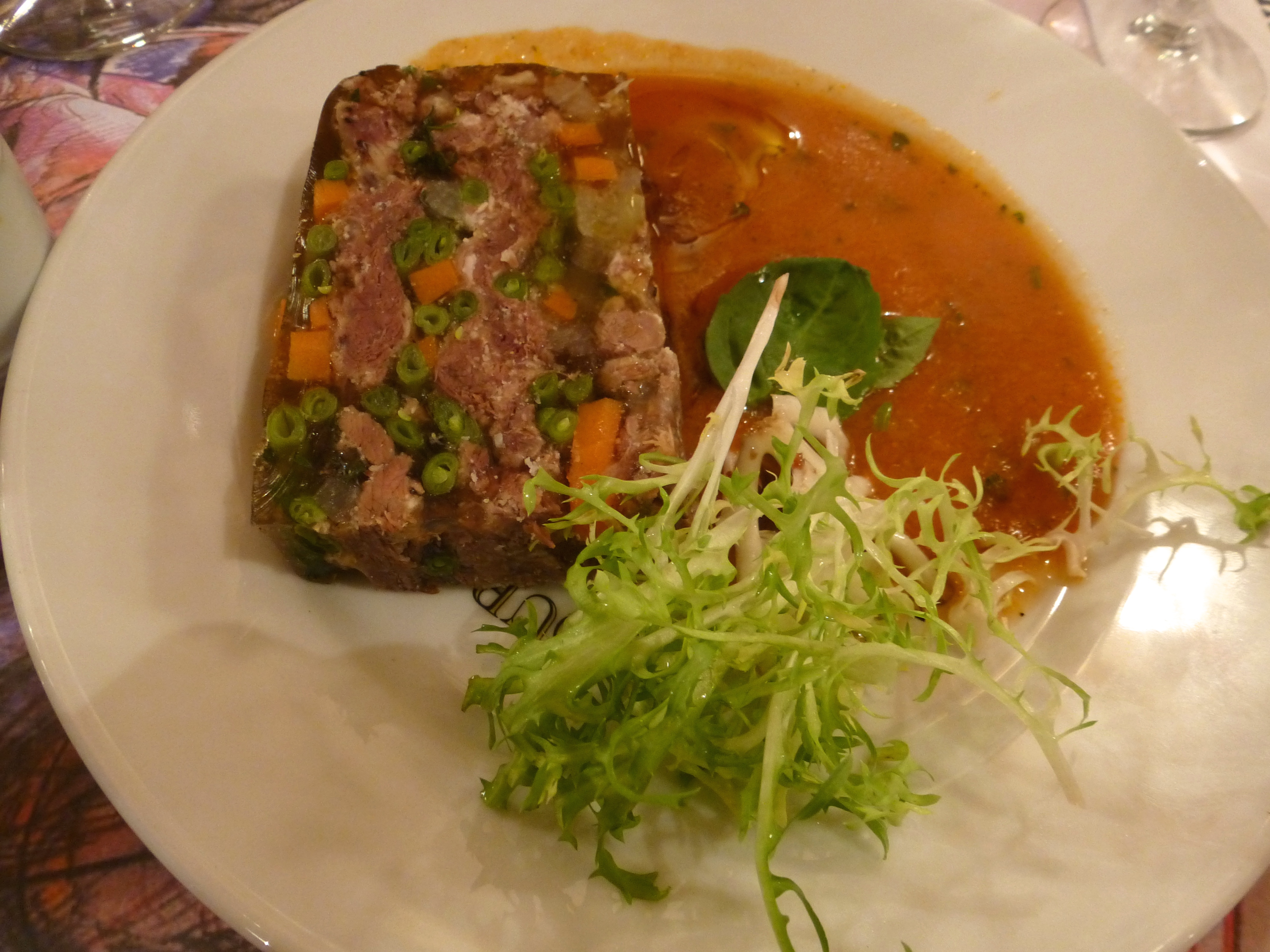 My usual starter, a lighter salade frisée which I order as a light entrée because I know that I’ll also get the onglet de boeuf (hanger steak), rare, with a huge pile of wonderful frites, and that I’ll also have a rich dessert: 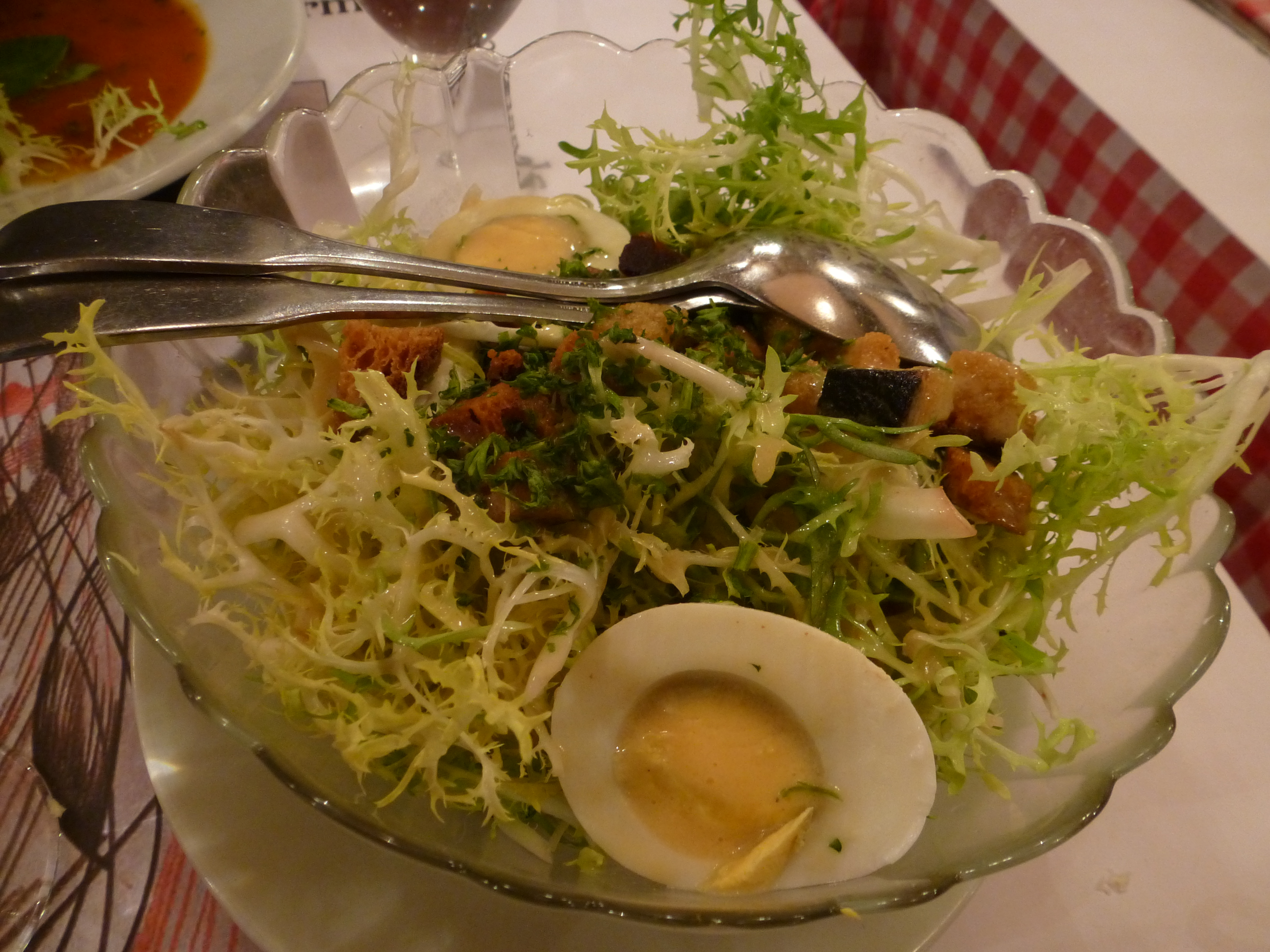 My companion got stewed beef cheeks in a rich gravy, served with small macaroni. I’d never had beef cheeks before but she had, and, as a foodie, pronounced these the best she’d ever had. The portion was huge: too big for even a trencherman (trencherperson?) to finish, and the dish also defeated the French woman at the next table. 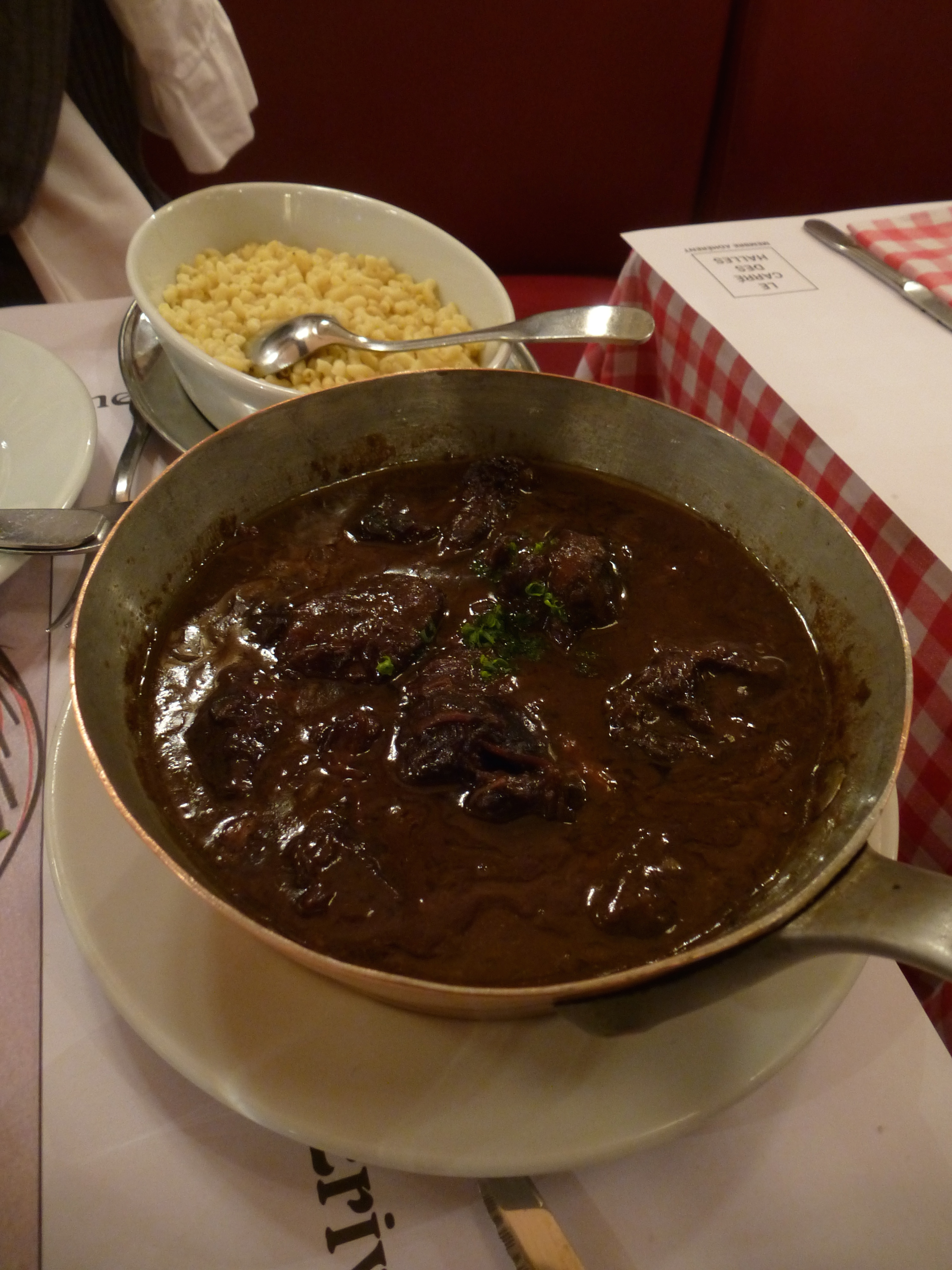 My onglet, which I’ve cut so you can see it’s cooked the right way (“saignant“, or “bloody” a tad more cooked than “bleu“). Sweet shallots cut the richness of the meat. 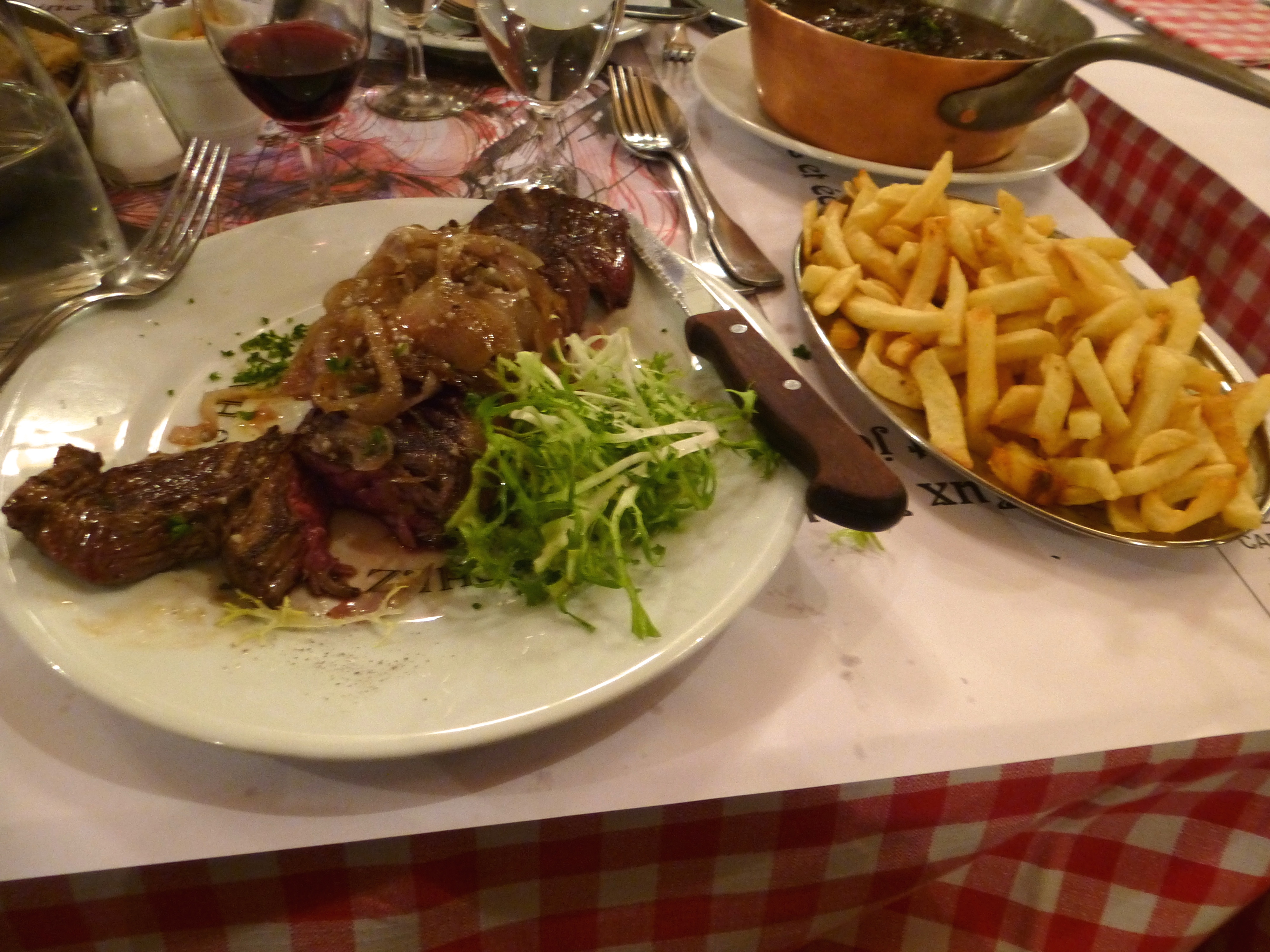 I forgot to photograph the dessert, the house’s famous baba au rhum, as we were by then engaged in lively conversation with two older Frenchmen at the next table who had ordered lamb chops and boeuf salé, so we had to ask them how it was. Those guys could eat!

Here is a photo of the outside menu (not complete) and two of the desserts we had the day I arrived (baba au rhum to the left, along with the bottle of rum to douse it with), described in my first Paris post: 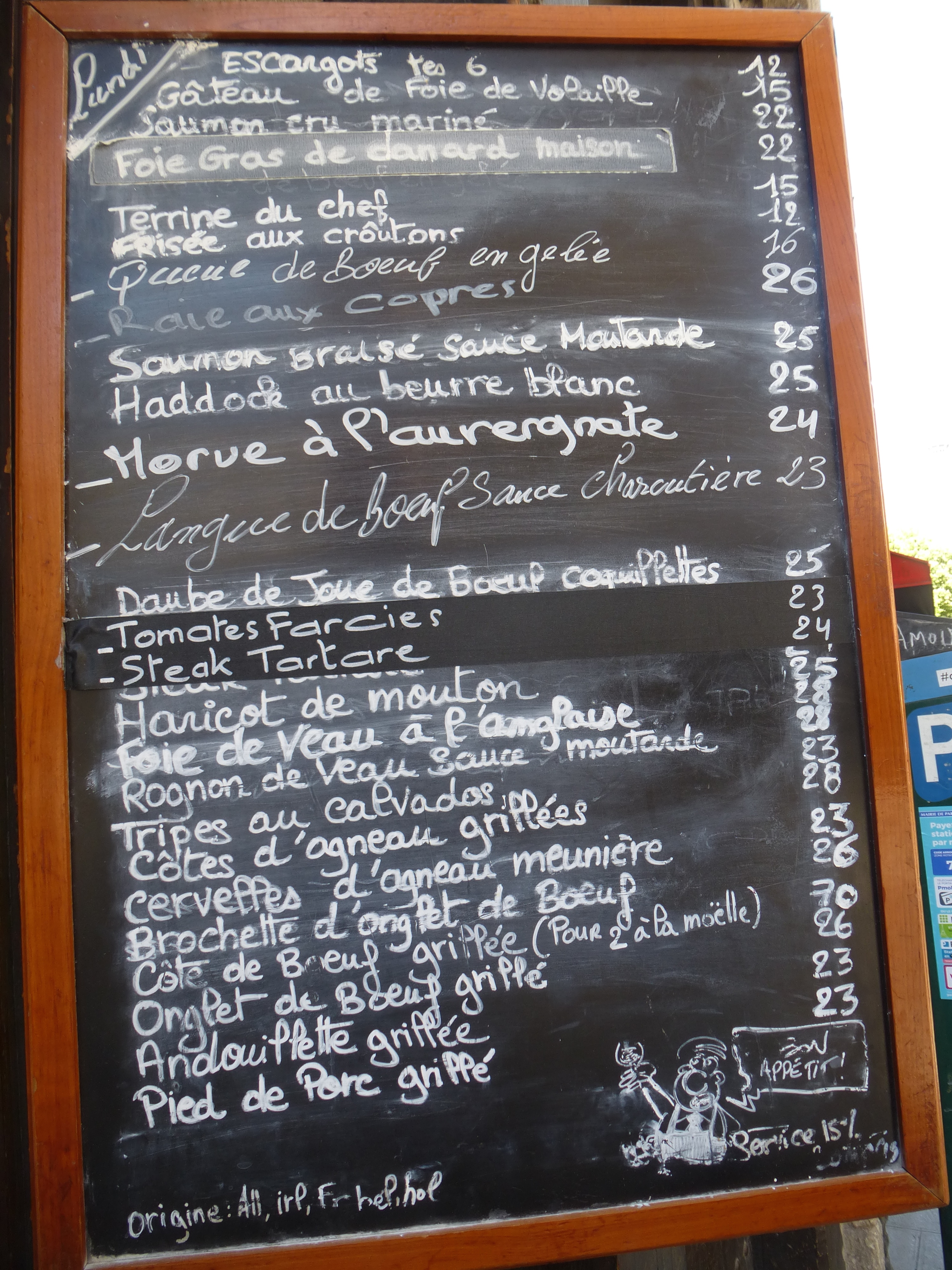 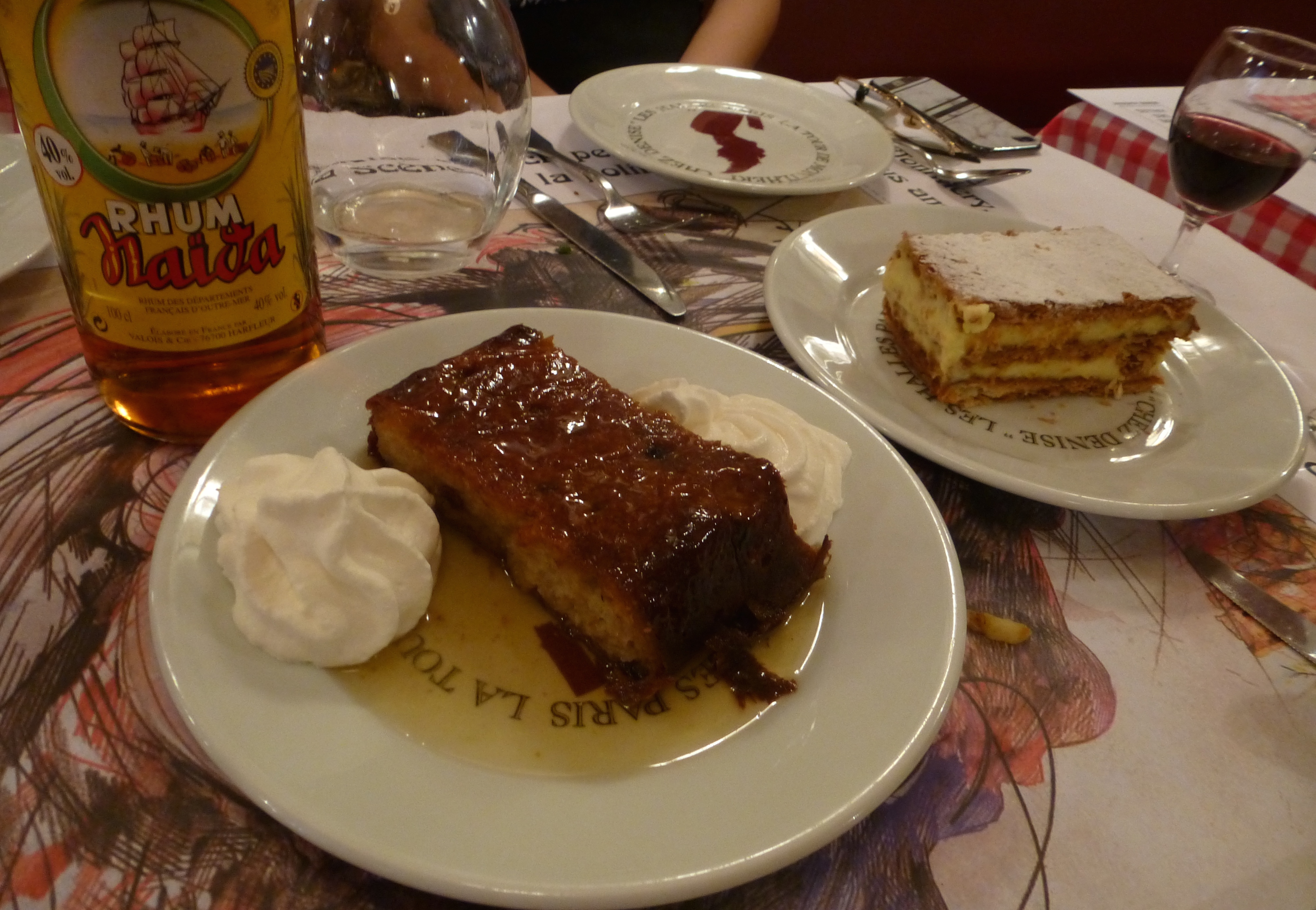 Another walk after lunch, as my friend wanted to try a seafood that is almost impossible to get but was described by gourmet Andres de Groot as one of the world’s best foods. On the way, we came across one of Paris’s famous covered streets lined with ancient markets that now harbor modern stores. 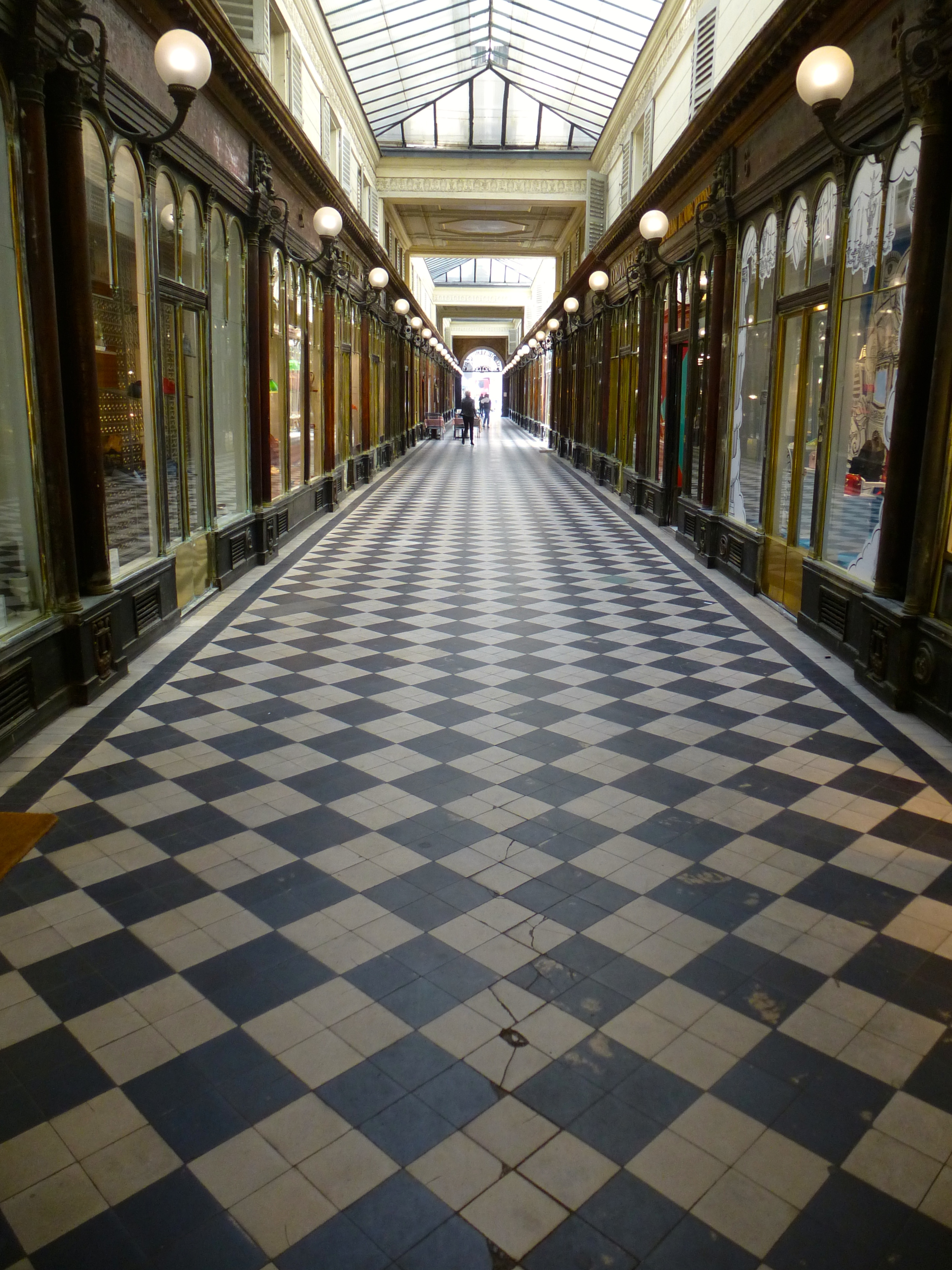 And a postprandial snack (not mine) at L’Ecume Saint Honoré : 6 Belon oysters and a violet (close-up below)m which is actually a tunicate of the species Microcosmus sabatieri, and is also called “fig of the sea.” One rarely sees these and my friend called all around Paris until she found a place that had them, but then they got them in only yesterday, which is why one of them had to be eaten after a planned lunch. The oysters were not a problem, as they presented no bulk: 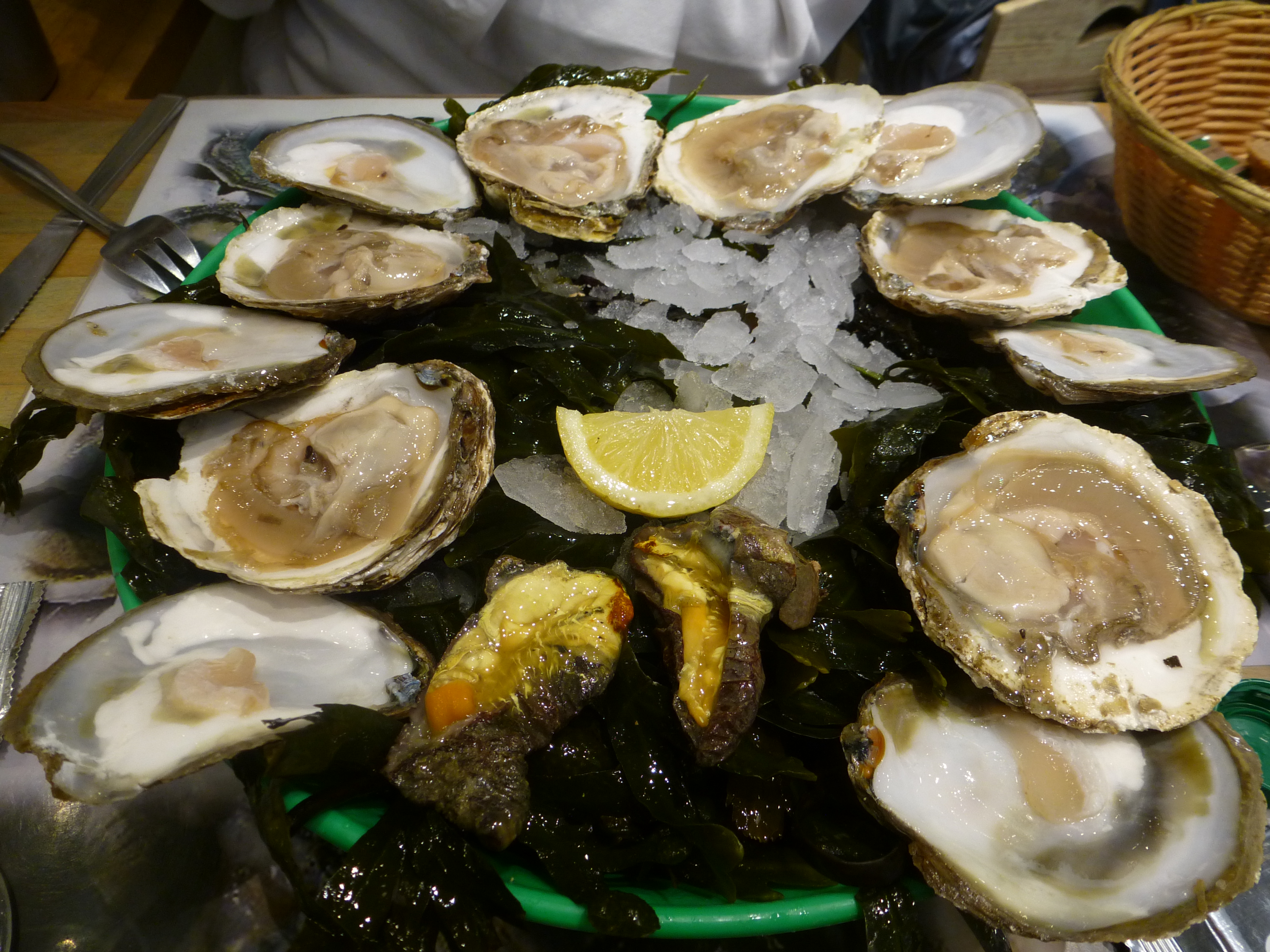 The violet. I didn’t taste it, but my friend said it was hard to describe, but tasted strongly of iodine. The covering was leathery. 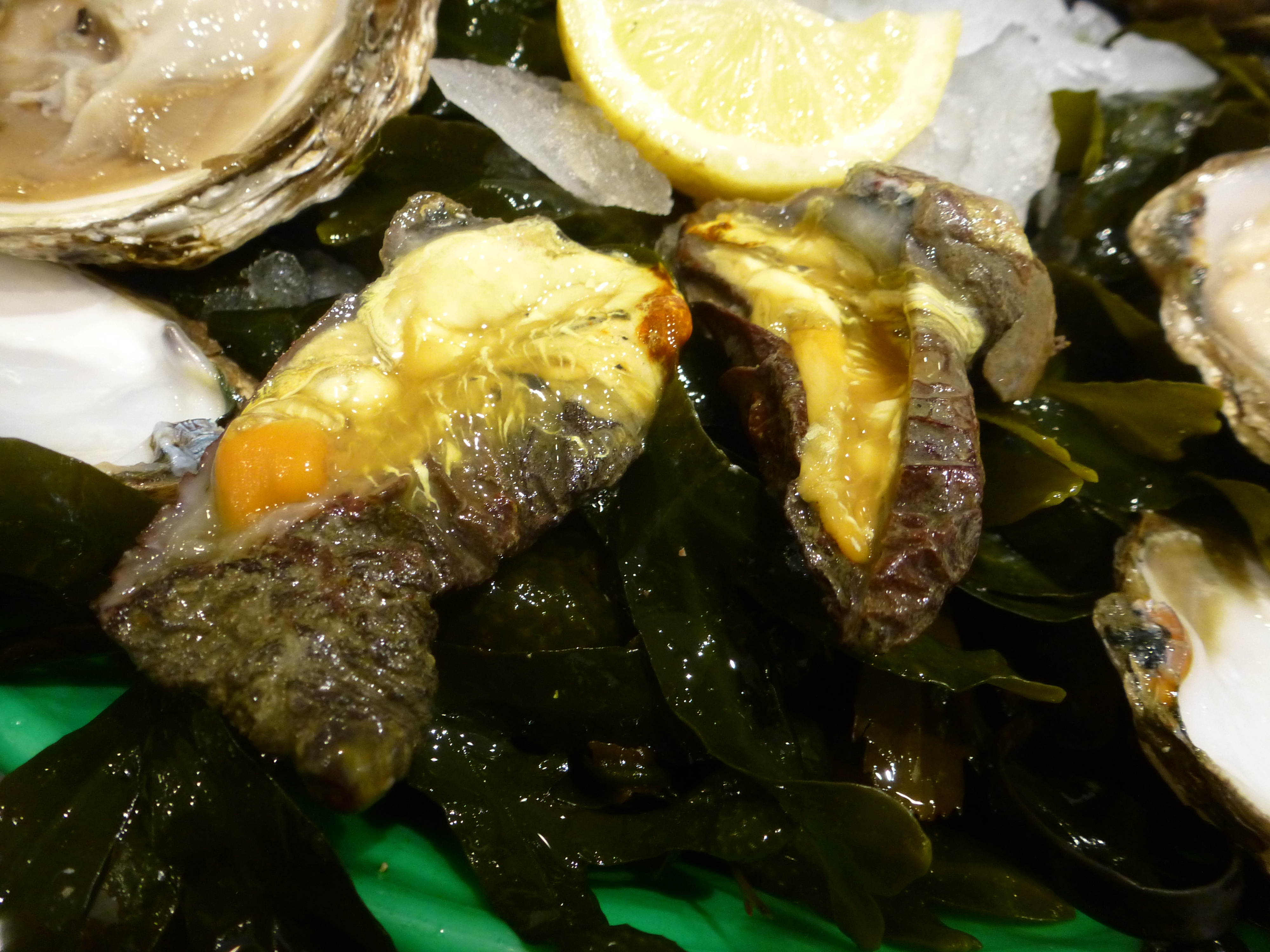 And so, stuffed with good food, I returned to my hotel to pack, nap, and plan my egress from Paris tomorrow. Like the fruits and vegetables of Les Halles, I leave the city with sadness.