At many sites, including the Spokane (Washington state) newspaper The Spokesman Review, there are reports that a Vice President of Gonzaga University (a Jesuit school in Spokane) sent out an email to students warning them against cultural appropriation and inappropriate celebration on Cinco de Mayo (today), a day that often serving as an excuse for Mexican-themed parties with boozing. Here’s the VP’s email, which appears at Campus Reform: 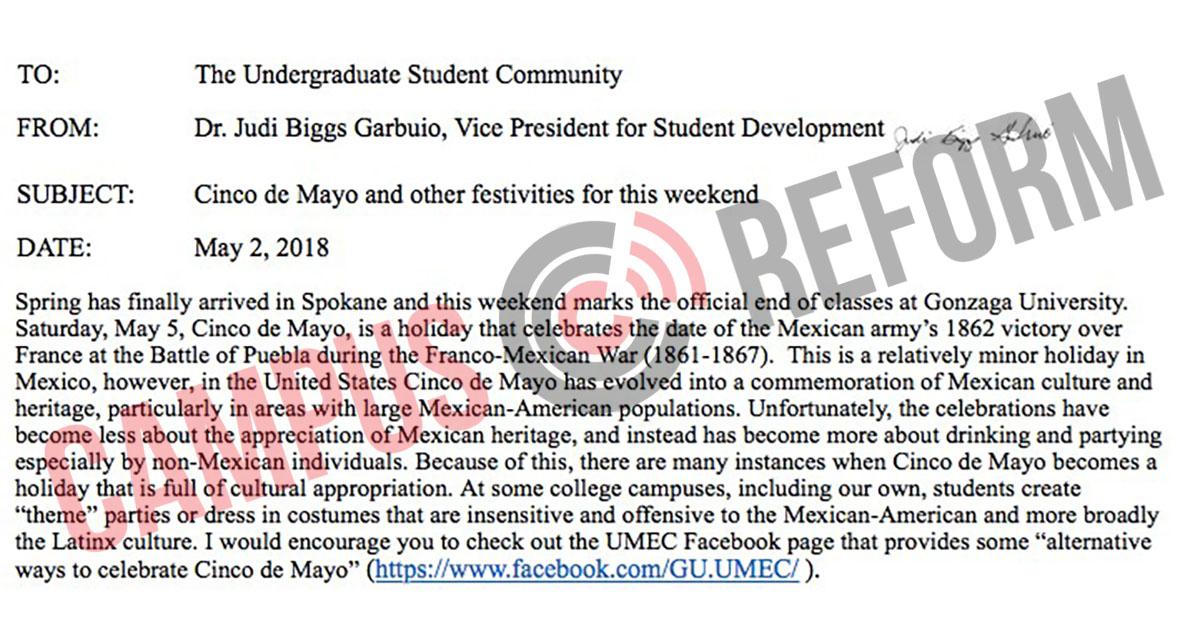 The Unity Multicultural Center is in fact a Gonzaga University organization. On their Facebook page cited by Vice President Garbuio, you’ll find this list of dictates, including the last one suggesting donations to a social-justice organization. Your’e also supposed to call out your friends if they don’t celebrate with proper respect: 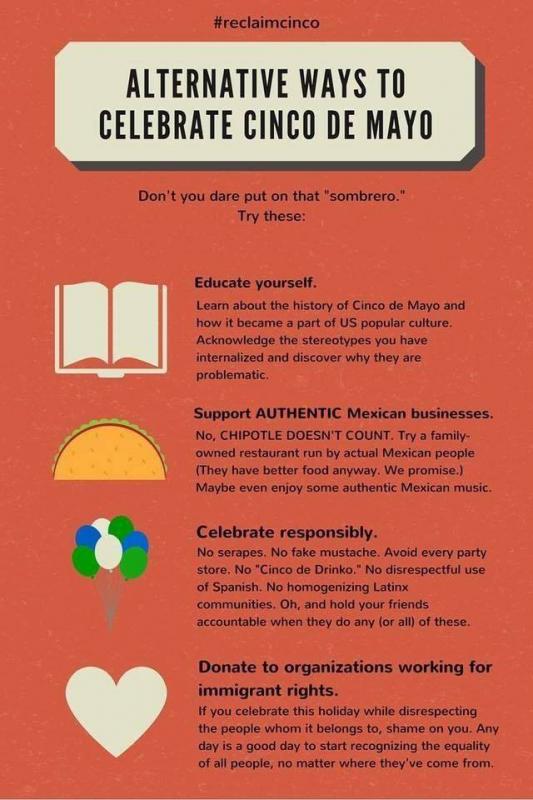 More from the Spokesman:

After Ben McDonald, a Gonzaga student, penned a story about the email for Red Alert Politics, a horde of other popular conservative websites, including the Daily Wire, followed suit.

“Colleges have become havens for the easily offended on campuses across the nation to complain about people enjoying themselves as being ‘offensive to their culture,’ ” McDonald wrote. “Whether it was Yale students getting offended for Halloween costumes or Pitzer College students saying that hoop earrings are racist, Gonzaga is just the next addition to the many other universities who have caved in the face of ‘cultural appropriation.’ ”

Biggs Garbuio told The Spokesman-Review she was surprised to see so many websites sound off on her email. She said she wrote a similar email a year ago and annually sends emails during Halloween about avoiding racially insensitive costumes.

“The intent was purely to educate the students on the history of Cinco de Mayo,” she said. [JAC: No it wasn’t; it was mainly to control their behavior.]

After seeing some schools across the country dealing with the backlash of cultural appropriation in party settings, Biggs Garbuio said she wanted to get ahead of the issue.

Now don’t get me wrong.  There are ways to celebrate the date that are inappropriate and offensive, at least to me: these include wearing fake mustaches or anything that mocks Mexico or Mexicans. Serapes and sombreros are a judgement call; I sure as hell wouldn’t wear one, but you can wear them without the intent of making fun of Mexicans. They are, after all, clothing worn by some Mexicans, and wearing them might be a celebratory rather than a denigrating move, like wearing green on St. Patrick’s day. (Believe me, lots of Chicago-ans without Irish ancestry wear green top hats and bow ties on St. Paddy’s Day—clothing not even worn by the Irish.)

What I object to is that a university takes it upon itself to give students cultural lessons, and even suggest donating to immigrants’ right organizations. That’s something a good liberal would do anyway, but it’s not a college’s function to police your behavior in this way. Let the students learn for themselves if they overstep boundaries, and where those boundaries lie and why.

This all reminds me of Erika Christakis’s response at Yale to an email from the Intercultural Affairs Committee telling students to dress in non-offensive ways on Halloween. Christakis, a housemaster at the university, wrote students an email saying that perhaps they themselves should decide appropriate dress rather than be dictated to by others. Well, you know what happened to her: she was demonized and ultimately hounded out of her job and Yale itself. What happened to her was unconscionable. So let me play Christakis to Gonzaga: Vice President Biggs Garbuio, stop telling students what “cultural appropriation” is and how to behave properly. Don’t police them; let them learn for themselves.

When I was in India at Christmas, there were many parties at which Hindu citizens celebrated the holiday by drinking and dancing. I even met a Santa Claus who was most likely not a Christian but a Hindu (see here). Would Gonzaga write a note to Hindu students, telling them to knock off the revelries at Christmas because, after all, it is a religious holiday celebrating an event sacred to Christians? I doubt it.

For other Pecksniffian policing of the holiday, see here, here, and here.