It’s Saturday, May 5, 2018, and tomorrow I leave for the world’s most beautiful city, Paris (Prague runs second). But today is National Enchilada Day (I’ve just had many in New Mexico), and, famously, Cinco de Mayo, celebrating the Mexican victory over the French at the Battle of Puebla in 1862. The holiday also celebrates Mexican culture, which of course includes enchiladas and other wonderful food. You’re allowed to eat them today without being accused of cultural appropriation.

On this day in 1260, Kublai Khan became head of the Mongol Empire, and decreed the construction of a stately pleasure dome.  In the U.S. on this day in 1809,  Mary Kies became the first woman awarded a U.S. patent, involving a method for weaving straw together with silk and thread.  On May 5, 1821, Napoleon Bonaparte died in exile on St. Helena, one of the most remote spots on Earth. And, on cinco de Mayo, 1862, Ignacio Zaragoza’s Mexican troops defeated the French at the Battle of Puebla.  On this day in 1891, Carnegie Hall in New York City formally opened with a big public music performance; Tchaikovsky was the guest conductor.  On May 5, 1904, the very first perfect game in modern baseball was pitched—by the immortal Cy Young. (In a “perfect” game, nobody reaches first base) On this day in 1912, the newspaper Pravda, the organ of the Communist Party of the Soviet Union, began publishing in St. Petersburg.

A historic day in evolutionary biology: it was on May 5, 1925, that teacher John T. Scopes was given his arrest warrant for teaching human evolution in a public school, violating Tennessee’s Butler Act.  In 1961, astronaut Alan B. Shepherd became the first American in space, going up and down without orbiting. If you read The Right Stuff, you’ll see that he was neglected in favor of the first American to actually orbit the Earth: John Glenn.  On this day in 1973, the horse Secretariat won the 1973 Kentucky Derby with a time of 1:59.4, a record that still stands. And exactly 8 years later, Irish hunger striker Bobby Sands died in Long Kesh Prison hospital; he’d been starving for 66 days and was 27 years old.

Here’s Secretariat’s marvelous victory, coming from sixth place to win by two lengths. He went on to win the Triple Crown that year. What a horse! Here’s the sad last footage of the horse before he was euthanized.

Meanwhile in Dobrzyn, Hili is engaged in her usual solipsism:

Hili: It’s a pity that my fur is not black.
A: Why?
Hili: I would look like a panther. 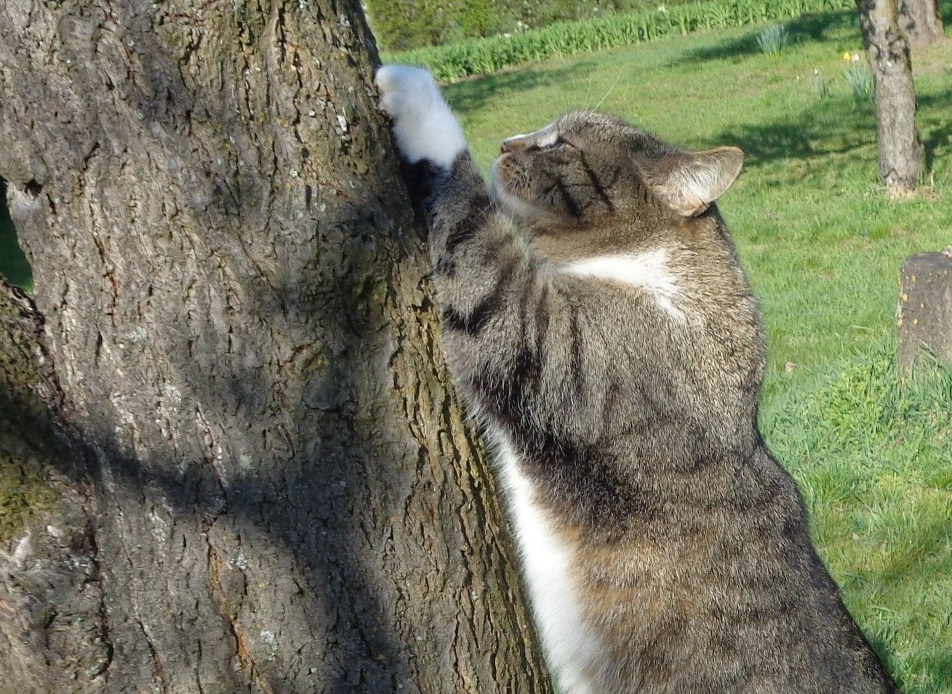 People who can't distinguish between etymology and entomology bug me in ways I cannot put into words.

From Grania: listen to those tiny meows? I think this is one of those short-legged mutant cats:

And a HUGE mutant cat!

From Matthew, a sad commentary on the increase in incarcerated Americans:

What a graceful lizard!

. . . and a fish I didn’t know existed: the pineapplefish (Cleidopus gloriamaris) from waters off Australia:

Fish fact: This is a pineapple fish. Not only is it heavily armored, it also has a neat light organ under its eye (the orange thing)that glows blue-green at night to help it feed. All hail the pineapple fish! pic.twitter.com/7HNZVf3cer

The volcano Kilauea erupted on the Big Island (Hawaii) yesterday, driving many people from their homes. This picture tells the tale:

Just back from Pu’u O’o vent this made my heart stop… yesterday it was full of lava, today… it’s empty. As our pilot from Paradise Helicopters put it, it went somewhere… 😔 pic.twitter.com/9THLy8i9vd

Insect of the day. Two dead-leaf bush crickets on the verge of making sweet love. The male sits atop the female like an incubus. pic.twitter.com/rizO1vaRDC

From Grania and Matthew: a list of people’s screwups. Go read the thread connected with the second one below:

We want to hear about your work related fuck-ups. Reply, quote tweet, do your worst.

Got my days wrong and ended up alone in a room with my boss and the President of Ireland while I was on ketamine. https://t.co/gSjPY8WjKL