A service dog forgot he was at work and charged towards one of the characters during a recent performance of Cats. The Broadway performance of the Andrew Lloyd Webber musical – which sees actors and actresses dress up as cats – was halted when the service dog leapt up from beside its owner and sprinted towards the stage. Nasa launches spacecraft bound for Mars Spies at the Neil Simon Theatre told Page Six the dog ‘got away from its owner and ran after [the character] Bombalurina, performed by actress Mackenzie Warren, during the opening number’ Jellicle Cat. Luckily a fast-moving usher intervened and ‘returned the wayward canine to its mortified owner’.

. . . A spokesperson confirmed that the incident took place but added: ‘In the storied history of Cats, this is the first time one of the actual cats was involved in an incident with a dog. ‘We’re pleased to report that no animals or humans were harmed in the dust-up, and the performance continued without a hitch.’

A cat book in the public domain deserves your attention, and if you have kids you’ll want to read all of it to them and show them the photos. Here’s the book (click on screenshot to go to the entire work), which contains 40 photos and hilarious descriptions of the cats. It may be the first series of LOLcat memes: 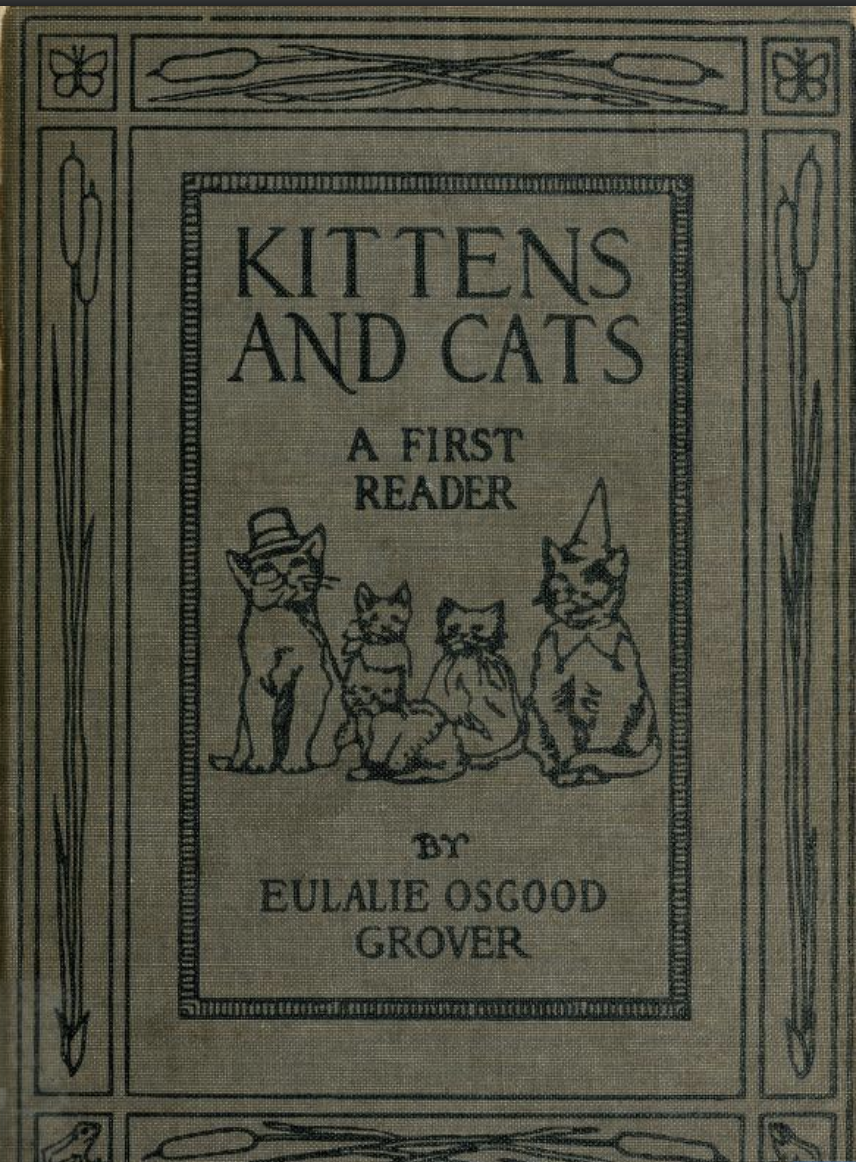 Before LOLCat, Grumpy Cat, Longcat, Nyan Cat, before all the famed kitties of the internet age, before the modern computer was but a glint in Mother Turing’s eye, there were the felines featured in Kittens and Cats: A First Reader (1911). If this delightful, yet also slightly creepy, book is anything to go by then taking photos of cats and brandishing them with an amusing caption was far from being a phenomenon born with the internet. Within its pages we meet “Queen Cat”, “Dunce Cat”, “Party Cat”, and perhaps our favourite “Hero Cat”, amongst others. The book is attributed to the American children’s author Eulalie Osgood Grover, who weaves about the pictures the tale of the Queen’s party and all the kitty characters attending. As for the photographs themselves, the book states them to be courtesy of the Rotograph Company, a popular postcard manufacturers, which implies they are almost certainly an early example of the work of Harry Whittier Frees, their staff animal photographer. A few years later Frees would become associated with a whole host of similar pictures under his own name, with the publication in 1915 of his The Little Folks of Animal Land, which was followed by the publication of a number of further such collections until he ended his own life in 1953. How did Frees get his cats to pose for such photographs, even more remarkable before the days of super quick shutter speeds? Although he denied the use of dead or taxidermied animals, and insisted only humane methods were used, one can’t help but wonder if this is really true, especially in the case of his later work which involved more elaborate tableaus than displayed in this book.

I show below a few pages. The theme is a party given by The Queen Cat, but there are digressions. And be sure to read “A word to the teacher” at the end! 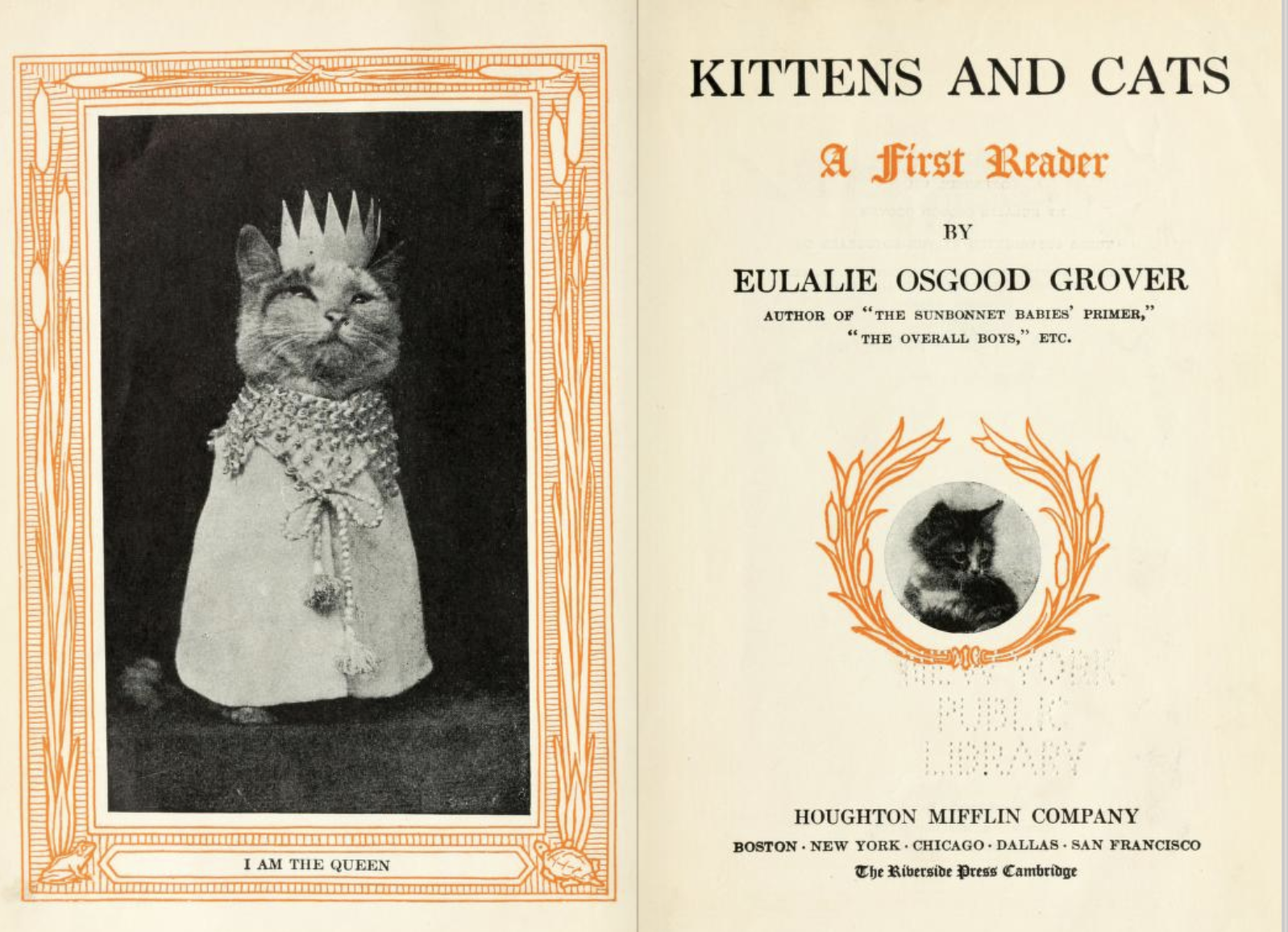 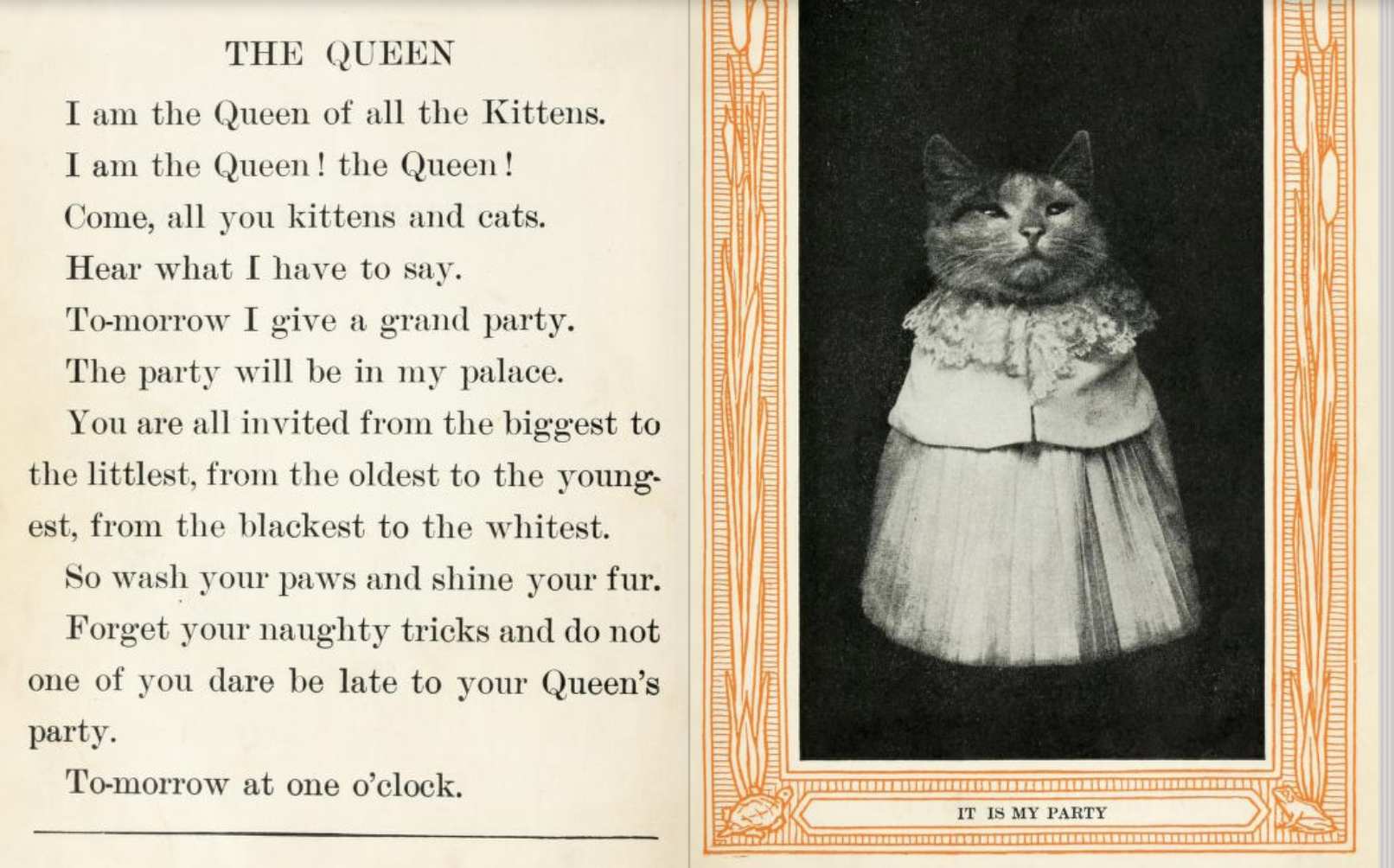 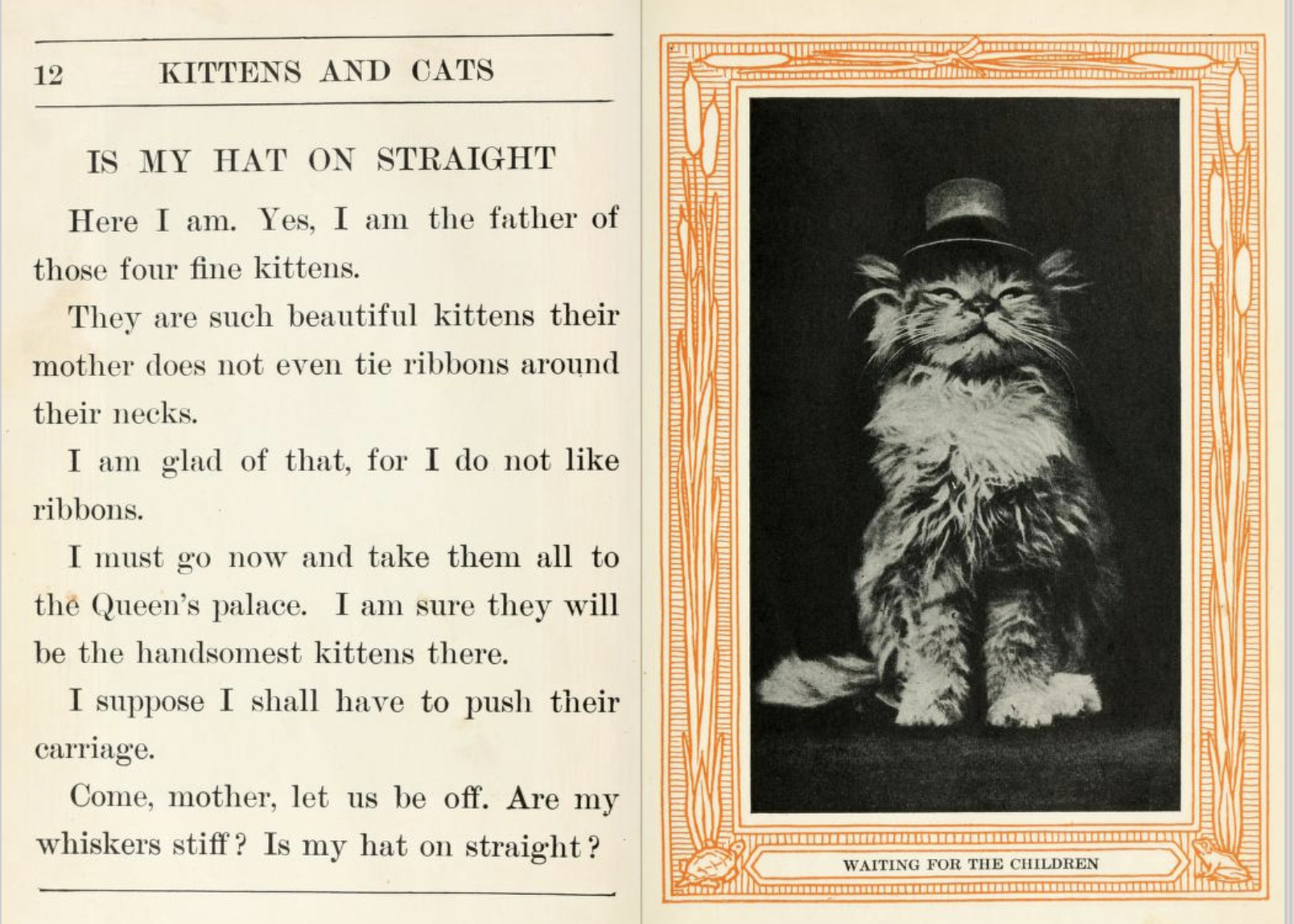 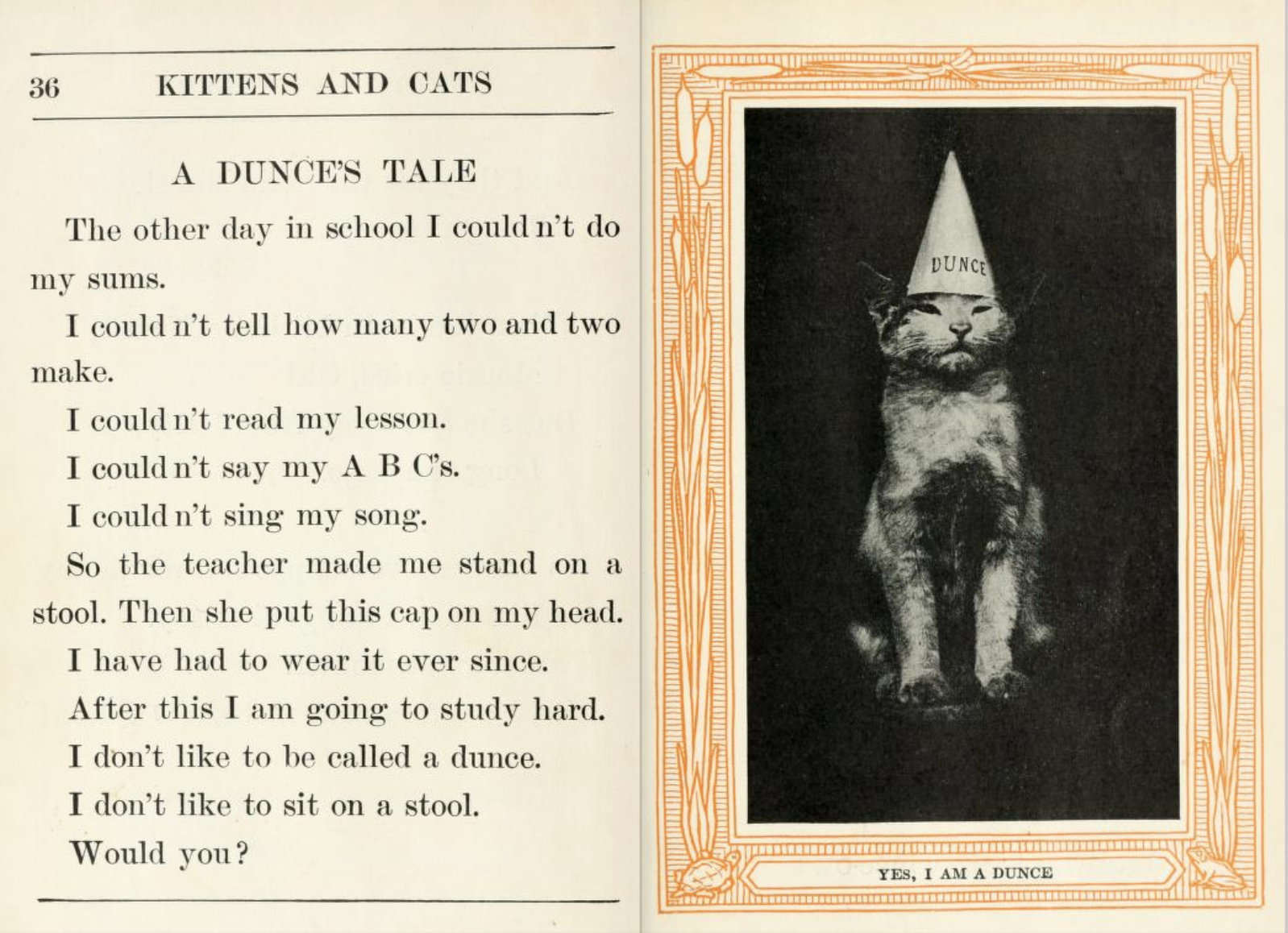 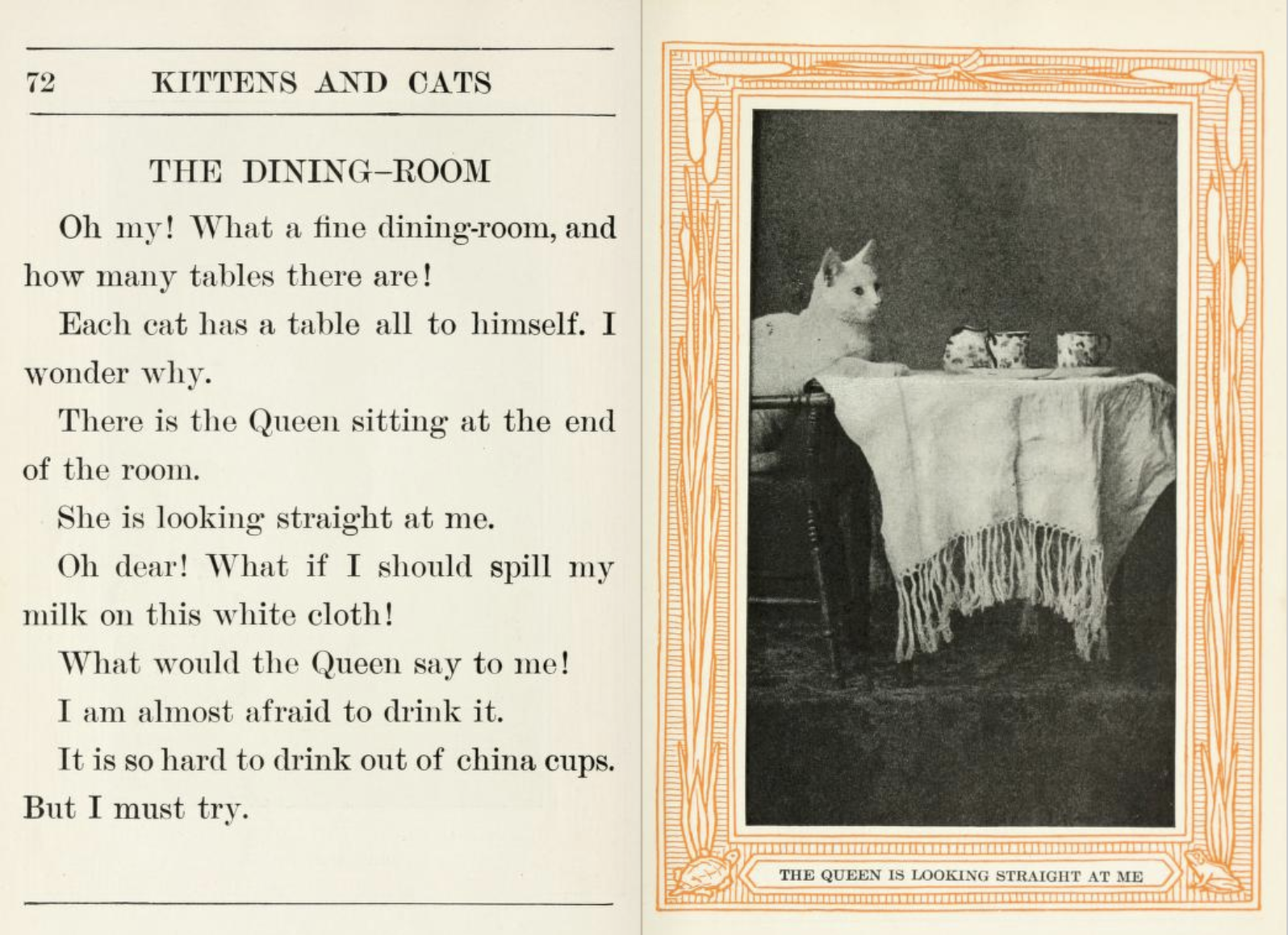 Finally, if you haven’t been following “Simon’s Cat”, Simon Tofield has collected eleven minutes’ worth of animation featuring the new kitten: the “Tiny Terror”:

Lagniappe: Reader Winnie in Paris says she saw a woman wearing these stockings under knee-high boots. It must have looked as if cats were peeking over the tops! 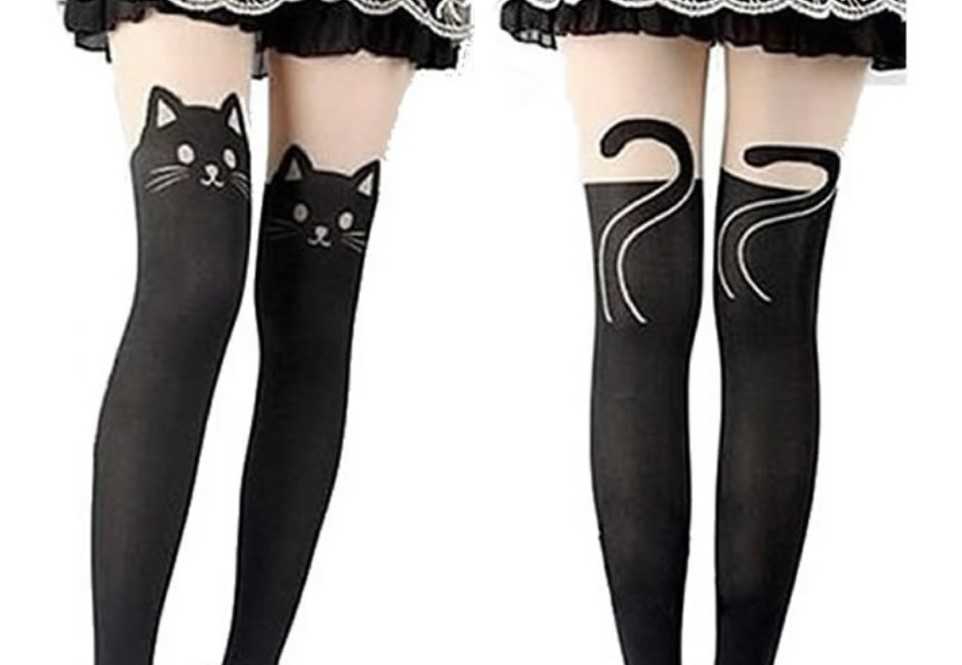