It’s also National Chocolate Parfait Day, as well as International Worker’s Day, celebrating the laboring folk. It was and is a huge holiday in the Soviet Union, but this tweet, from Grania, shows that not everyone was enthused:

May 1 1886 – 340000 workers in Chicago strike for 8 hour day; known as Emancipation Day. Begins tradition of May Day as workers’ holiday. pic.twitter.com/XCPEFXCzVV

On May 1, 301, Diocletian and Maximian retired for their office of co-Roman Emperor. On this day in 1169, Norman mercenaries landed in Leinster, which, according to Wikipedia, marks the beginning of the Norman Invasion of Ireland.  On May 1, 1328, the Wars of Scottish Independence ended as the Treaty of Edinburgh-Northampton recognized the Kingdom of Scotland as an independent state. But then, on the same day in 1707, the Kingdoms of England and Scotland joined to form the Kingdom of Great Britain.

On this day in 1753, Linnaeus published his catalogue Species Plantarum, marking the start of plant taxonomy as well as the Latin binomials which has become the modern convention of how to denote a species. Exactly 33 years later, Mozart’s opera The Marriage of Figaro had its debut in Vienna. On this day in 1863, the Battle of Chancellorsville began.  On May 1, 1930, Pluto was officially named as a planet. It still is one, and shut up if you disagree!  In 1948, the Democratic People’s Republic of Korea (North Korea) was established under the tyrannical rule of Kim Il-Sung, who is still considered “The Eternal President of North Korea”. Exactly 8 years later, after successful field trials, Jonas Salk made his polio vaccine available to the public. What a hero! Today they’d try to patent it.  On this day in 1960, in the famous U-2 incident, Francis Gary Powers of the U.S. was shot down in his U-2 spy plane, creating a huge fracas. He spent two years in a Russian prison and then was returned to the U.S. in a prisoner exchange, dying in a helicopter crash in 1977.  On May 1, 1999, the body of British Climber George Mallory was found on Mount Everest, 75 years after he and his co-climber Andrew Irvine disappeared on Mount Everest. There’s still debate about whether they reached the summit.  On this day 7 years ago, there were two incidents: Osama bin Laden was killed by U.S. Navy Seals, and Pope John Paul II was beatified in a rush job by his successor Benedict XVI.

Meanwhile in Dobrzyn, Hili is using woo to prevent a failure of cherry maturation as happened last year. It’s a wonderful picture of Hili, too.

A: What are you doing?
Hili: I’m spitting three times over the right shoulder so that neither frost nor hail will damage the cherries.
A: My grandmother said that you have to spit over your left shoulder.
Hili: She could’ve been mistaken. 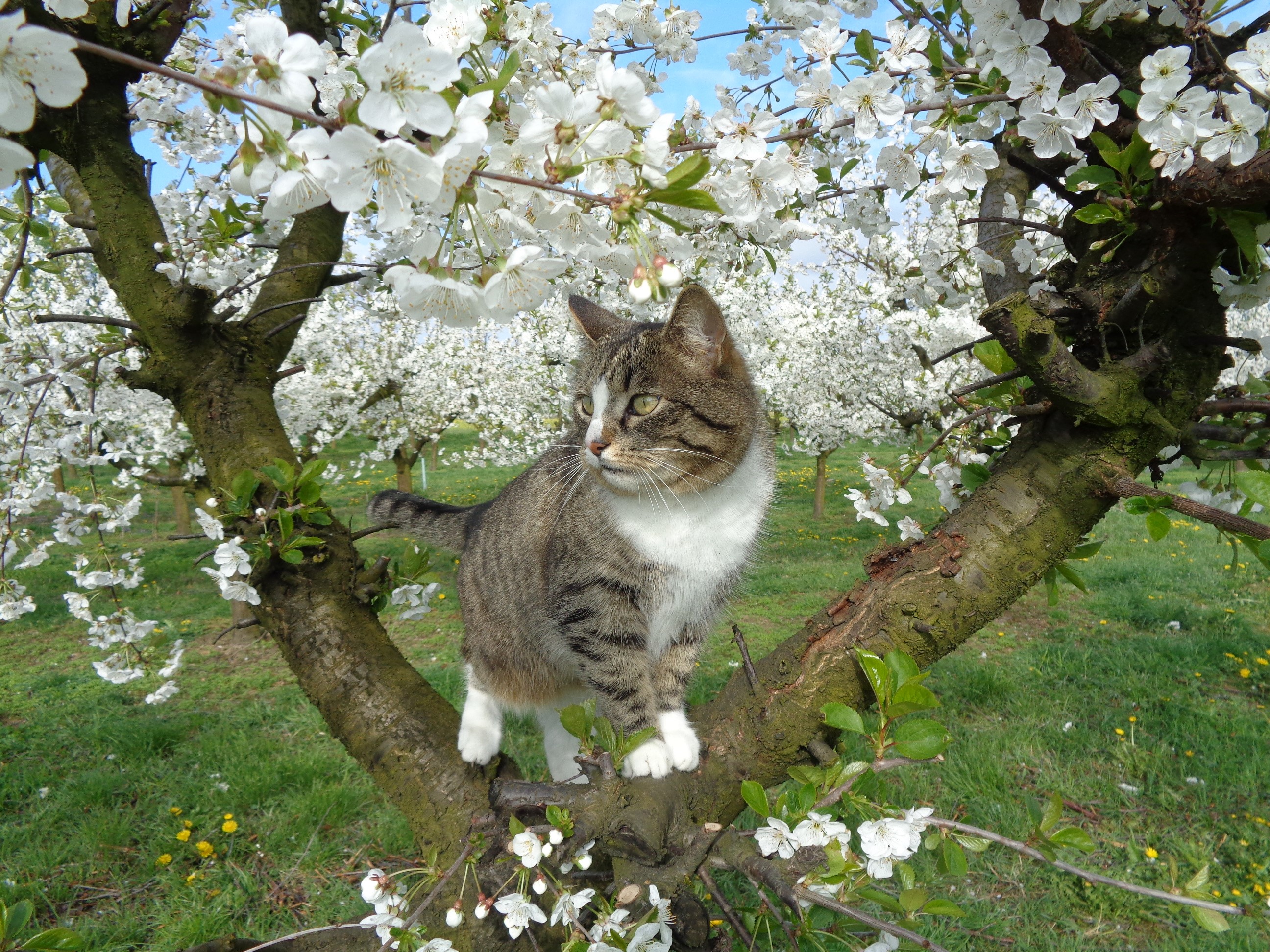 And, not far away, Leon is exploring the site of his future home:

Leon: well, I’m setting of in search for May adventures.

Reader Dean sent a tweet (enlarge sign by going to the tweet and clicking on the right side) that shows a postmodernist message from a landlord about the absence of a fire extinguisher.

Our landlord came and gifted us with conceptual art. pic.twitter.com/UOJEhFQlp9

And from Ann German via Heather Hastie, an ancient cat is reassured by a modern one:

From Grania, a splendid aerial view of Central Park:

Just a reminder why Central Park is the most famous Park in the world. Source: https://t.co/whwlx6E845 pic.twitter.com/gjnSWQhHQy

The hyprocrisy of the rich:

According to the New York Times, Mercedes Schlapp tweeted about the “out of touch leftist media elite” while in a limo en route to a media party. https://t.co/UNL37DWU6x pic.twitter.com/JSm0IR0LsY

And another inappropriate use of cats in advertising (are the cats being bathed in cocoa?)

It looks like the cocoa is used for bathing, as well. pic.twitter.com/3AGc7qHlnF

From Matthew; learn from Feynman how trains stay on tracks:

Thriller in PNAS: Symbiotic virus of parasitoid not only blocks immune system of caterpillar in which parasitoid deposits her eggs, but also betrays parasitoid offspring to a hyperparasitoid that parasitizes the parasitoids https://t.co/RpGYhUVlMD pic.twitter.com/mrDk5Q5bce