The Claremore [Oklahoma] Daily Progress has a nice story about a boy born with a cleft lip, a green right eye and a blue left eye adopting a cat with a cleft lip and exactly the same odd eyes (on the same side). An excerpt:

“Fate willed these two together,” the boy’s mom, Christina Humphreys, wrote in a blog post that has been shared more than 45,000 times on Facebook in less than a week.

After no owner claimed the unique feline, Mending Spirits volunteers named him Valentine and got him neutered and vaccinated. Foster caregiver Angie Kimes gave Valentine a home until he was ready to find a forever home. The all-volunteer Mankato-based rescue group posted about Valentine on multiple websites. Christina discovered Valentine after a post was shared on a social media group of moms of children with cleft lips.

Days later, the Humphreys were making the over 600-mile trip to Mankato to claim Valentine.

“We’re usually not spontaneous people, but we knew that we were meant to love this kitty,” wrote Christina, who did not respond to interview requests from The Free Press.

A family friend started a GoFundMe page that raised money to help the Humphreys pay for their trip to Mankato to meet Valentine. A Mankato area man paid their adoption fee. 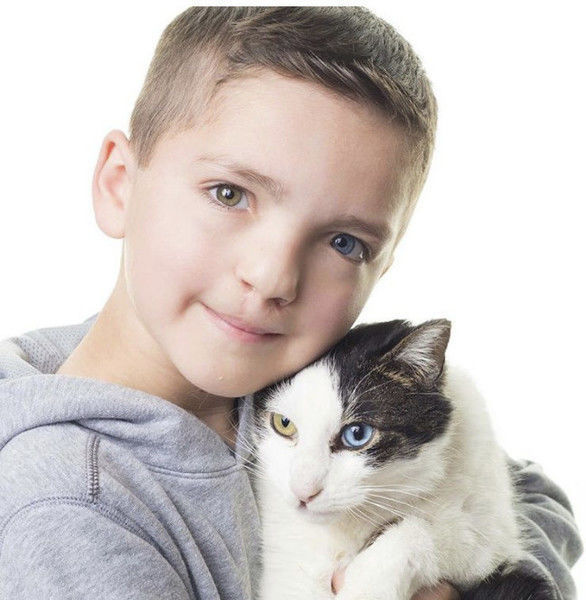 Madden renamed his new friend Moon and they are home in Owasso, Oklahoma getting to know each other better.

“I’m so thankful Madden has Moon,” Christina wrote. “Not only so that both he and the kitty have a relatable and sweet companion, but also, I hope Moon helps Madden realize that being born unique in an incredible thing.”

Humans can be wonderful, paying for this boy’s trip to meet his soul cat (surgery has largely fixed both). Here’s another photo: 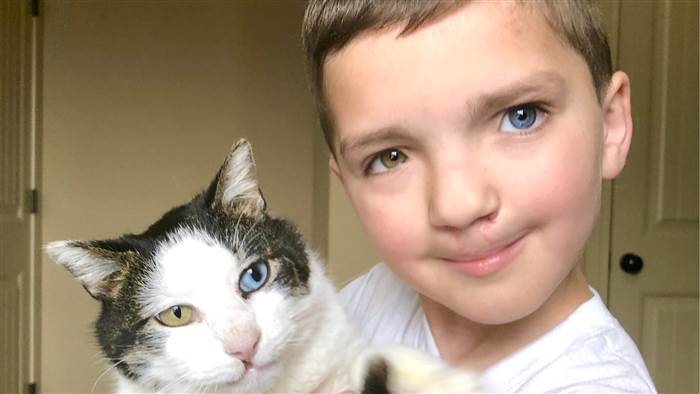 It’s long been my theory (which is mine) that medieval artists were simply unable to paint cats, either putting human faces on felid bodies or botching the job completely. I’m not quite sure why this was the case, but BuzzFeed proves my point with its piece “23 Ugly medieval cat paintings that will speak to your soul“. Here are a few (sources at the BuzzFeed post): 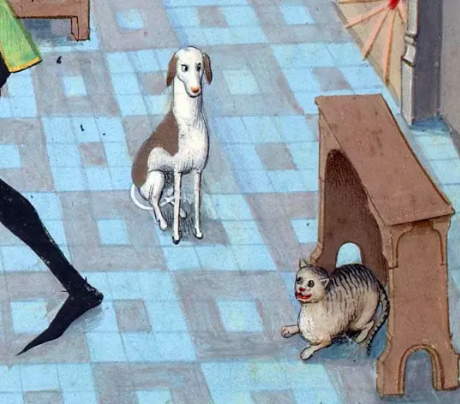 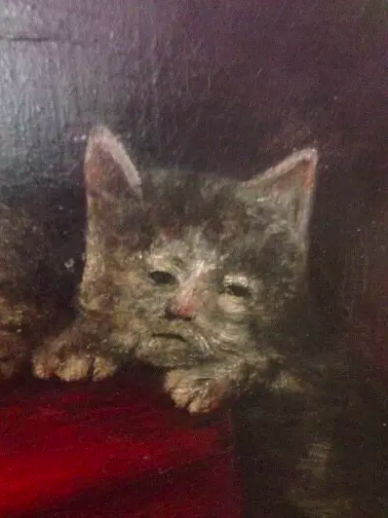 This cat has its tongue coming out of its nose: 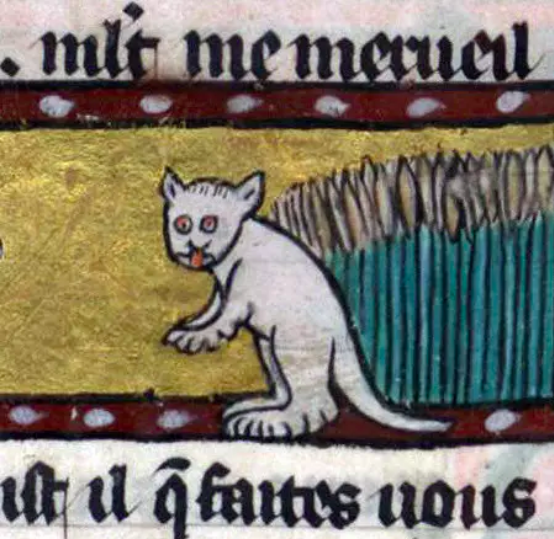 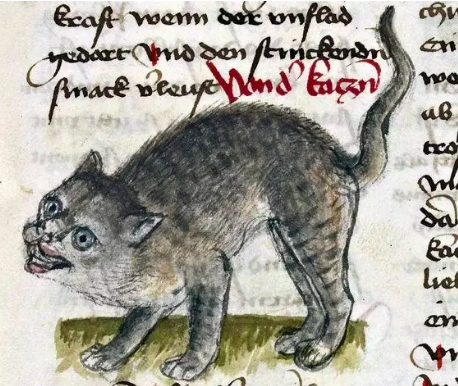 Another human face. Why couldn’t these artists get the cats right? Hadn’t they seen one? 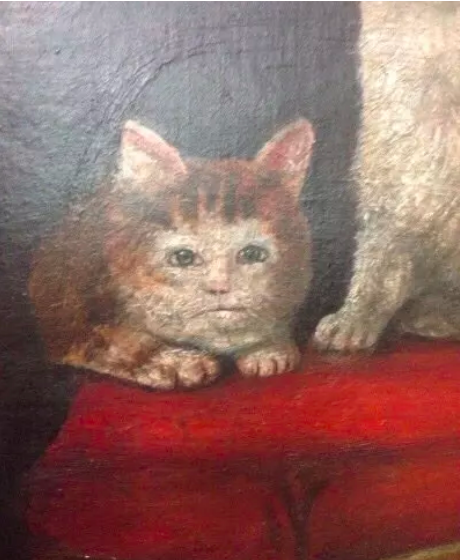 For even more grotesque and distorted cats, like the one below, see the paintings at Honest to Paws: 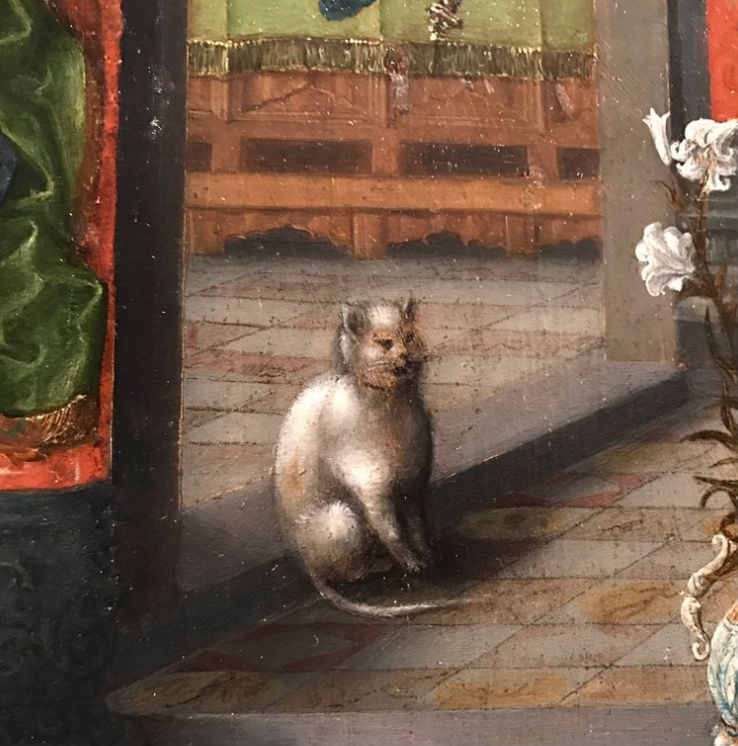 Finally, the Guardian crowdsources the answer to a burning question (click on screenshot to go to article):

There are several answers, and I’ll let you read them yourself, but this is the one we all think of:

So what else is it about kittens that trigger this cute reflex? Much of the earliest work into cuteness as a scientific phenomenon began with Austrian scientist Konrad Lorenz who coined the term “Kindchenschema”. As the name suggests, it basically proposes that the more qualities and features something has in common with human babies, the cuter it’s perceived as being. For instance, babies have disproportionately large heads and eyes compared to their eventual adult form, thanks to the uneven ways the brain and body develop. Kittens (and puppies) also have large heads and huge eyes, so are considered cuter than the more evenly-proportioned beady-eyed rodents nature provides us with.

Of course this just raises another question: why do we find big heads and eyes so attractive? My response would be this: babies are born that way for developmental reasons, and natural selection has altered our perceptions so that we find this appearance adorable enough to tend the bearer. After all, any parents who found human babies horribly ugly would be less likely to pass on their genes. But who knows?

But at least the mechanism can be tested, and one famous test was Steve Gould’s well known Natural History essay, “A biological homage to Mickey Mouse.” Who but Gould, who specialized in allometry—the differential relative growth of body parts—would think to apply that biological idea to a cartoon character?

But sure enough, as Mickey’s phenotype evolved over the years, his snout got relatively smaller and his head and eyes relatively bigger. Do read the essay; here’s a Disney drawing of Mickey’s evolution used in Gould’s essay: 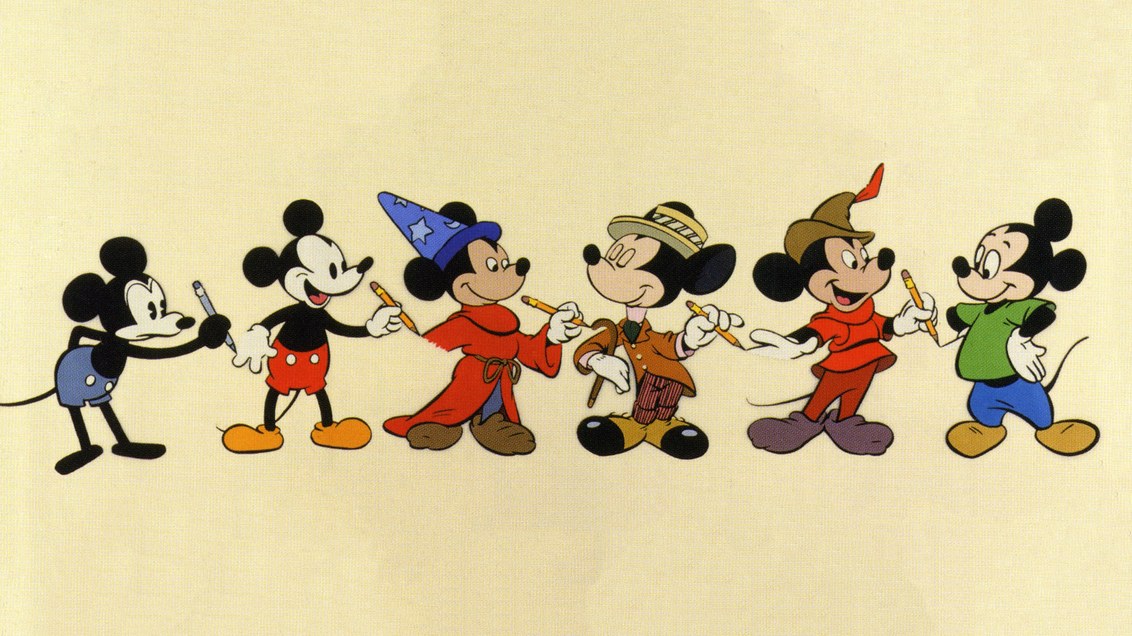