I spent two nights in Santa Fe as there’s so much to see and do—and eat. People watching is fun, too, as the town harbors a mix of wealthy locals, aged tourists, and aged hippies, as well as a “woo” culture (see below). The food is good, too, though I’m trying to restrain myself: no more than two meals a day.

Here are a few holiday snaps from Day 2:

This is the New Mexico Museum of Art, right off the central plaza. I didn’t go in, as I feared I would eat up the whole lovely day looking at their collection of 20,000 pieces. It’s got a good reputation, and is New Mexico’s oldest art museum. 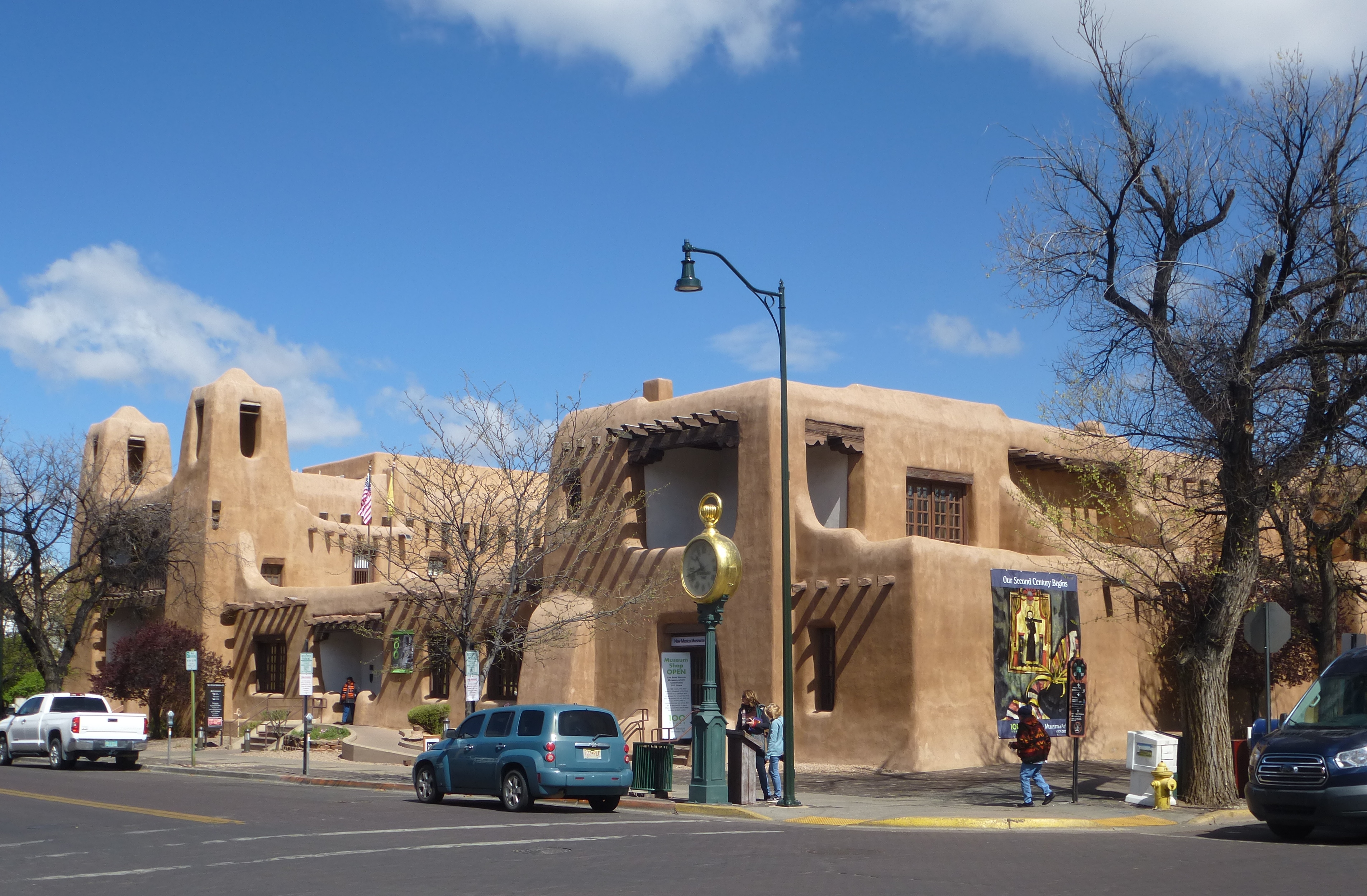 It was Saturday, so things were hopping: it was market day, when the local Native Americans come to town to sell their arts and crafts, including jewelry, blankets, and assorted lovely items. The vendors line the arcade along the Palace of Governors.  I didn’t buy anything (I already have too much stuff), but I greatly admired a handmade obsidian knife with a deerhorn handle made by a nice guy who chatted with me. I didn’t photograph it (I should have), and anyway it was $450: a piece of art, not cutlery. 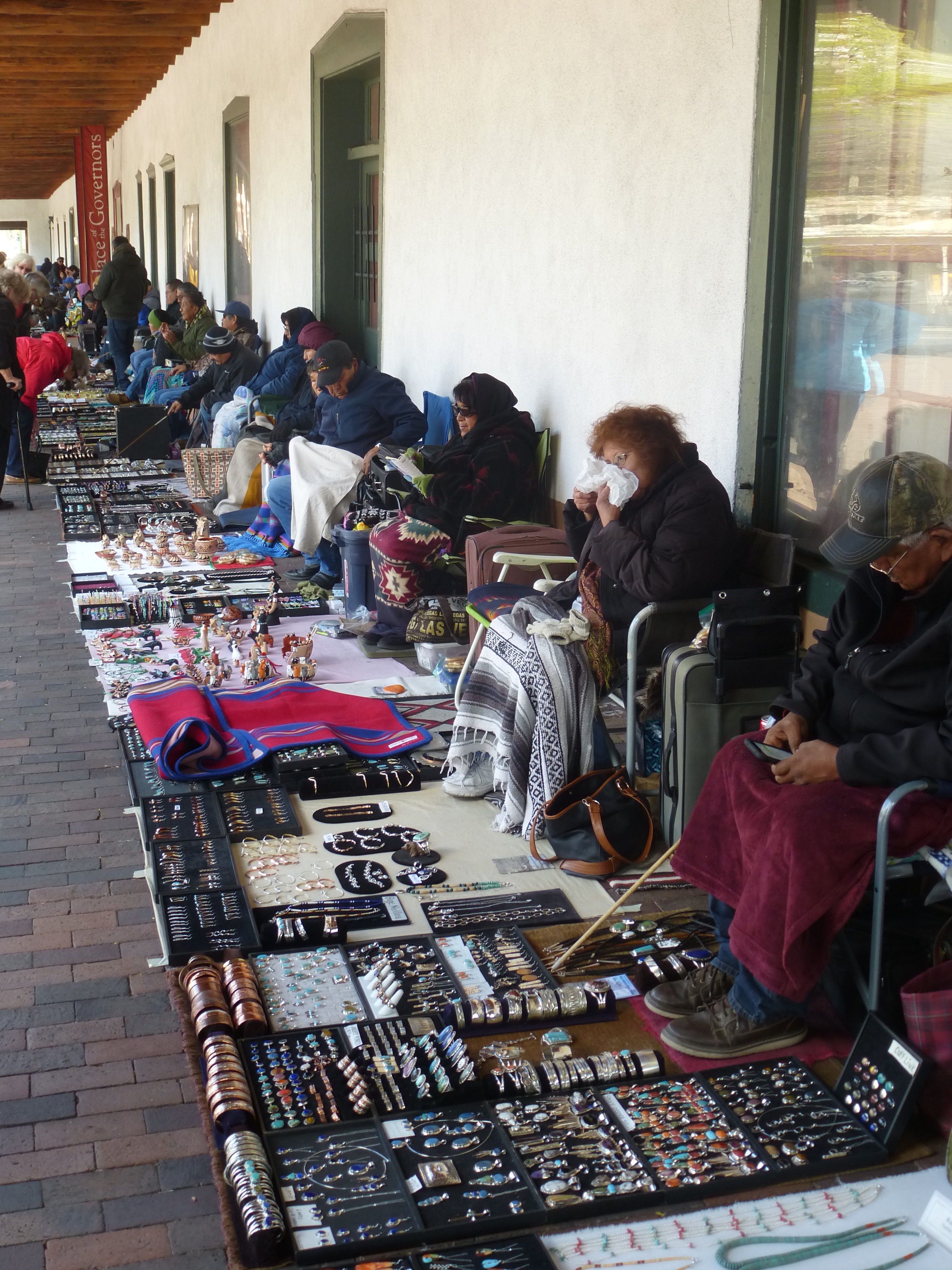 I noticed that the obelisk in the center of the Plaza, a memorial to the settlers of the state who died while killing off the locals, had been defaced, with a word missing and another one written in: 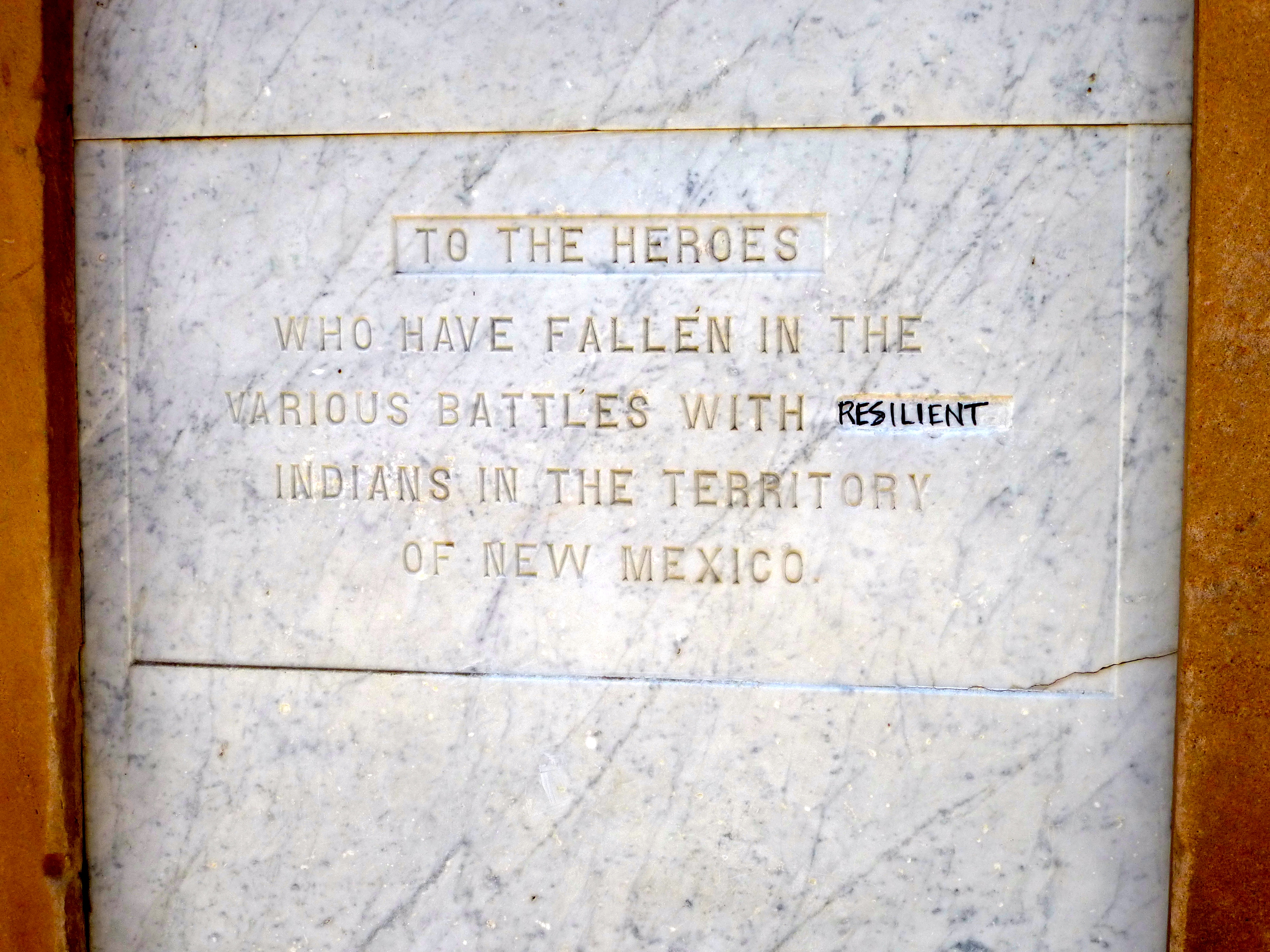 I asked a tour guide who was leading a group around what word had been there before. He said the word was “savage”, and that one day, in broad daylight, a guy (I think a Native American, but am not sure) walked up to the monument and hacked off the missing word. I don’t blame him, as the indigenous people were no more “savage”—and probably less so—than those who displaced and killed them. I think someone else wrote “resilient” later. The story of the destruction of the indigenous peoples is a sad one, and this graffiti is just one form of reparation.

There’s a newer plaque on the other side of the monument that tries to make amends for the old, offensive words. This is one correction I don’t mind: 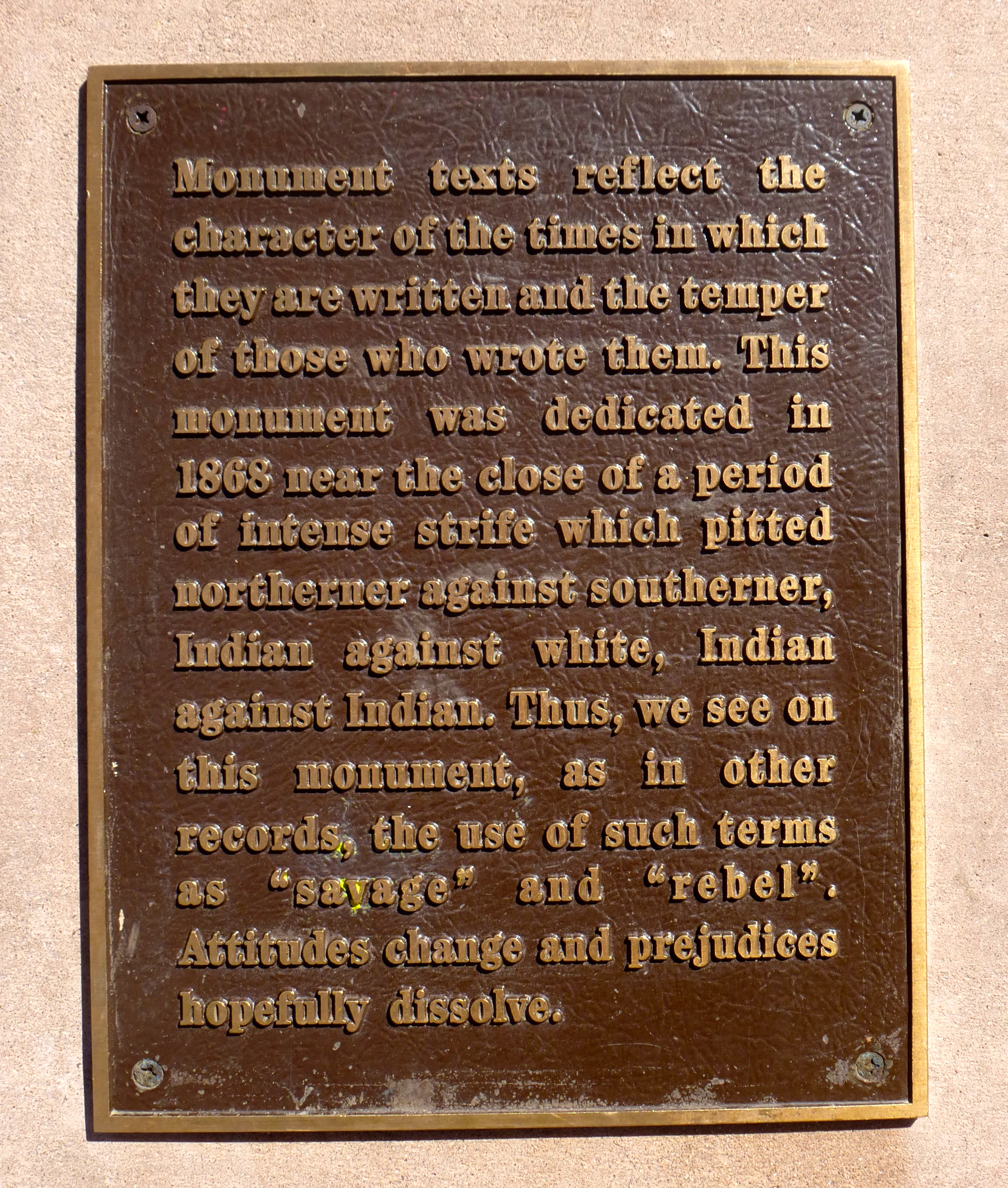 Tourists. I was surprised that many of them were older, but maybe they are “snowbirds” who come here to escape the chill of the north: 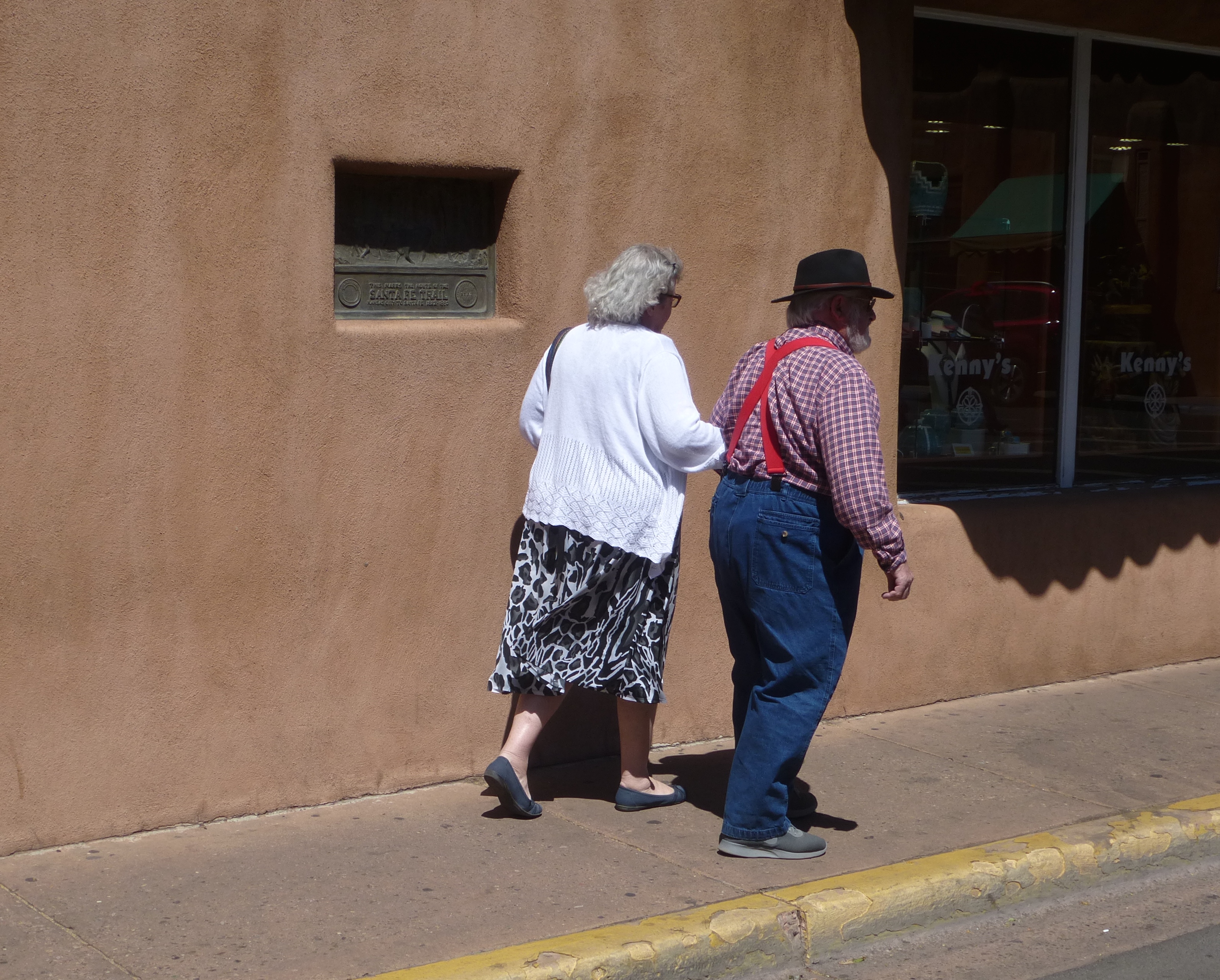 Jewelry for sale. If you like Native American style turquoise, this is paradise, but prices are, I suspect, very high: 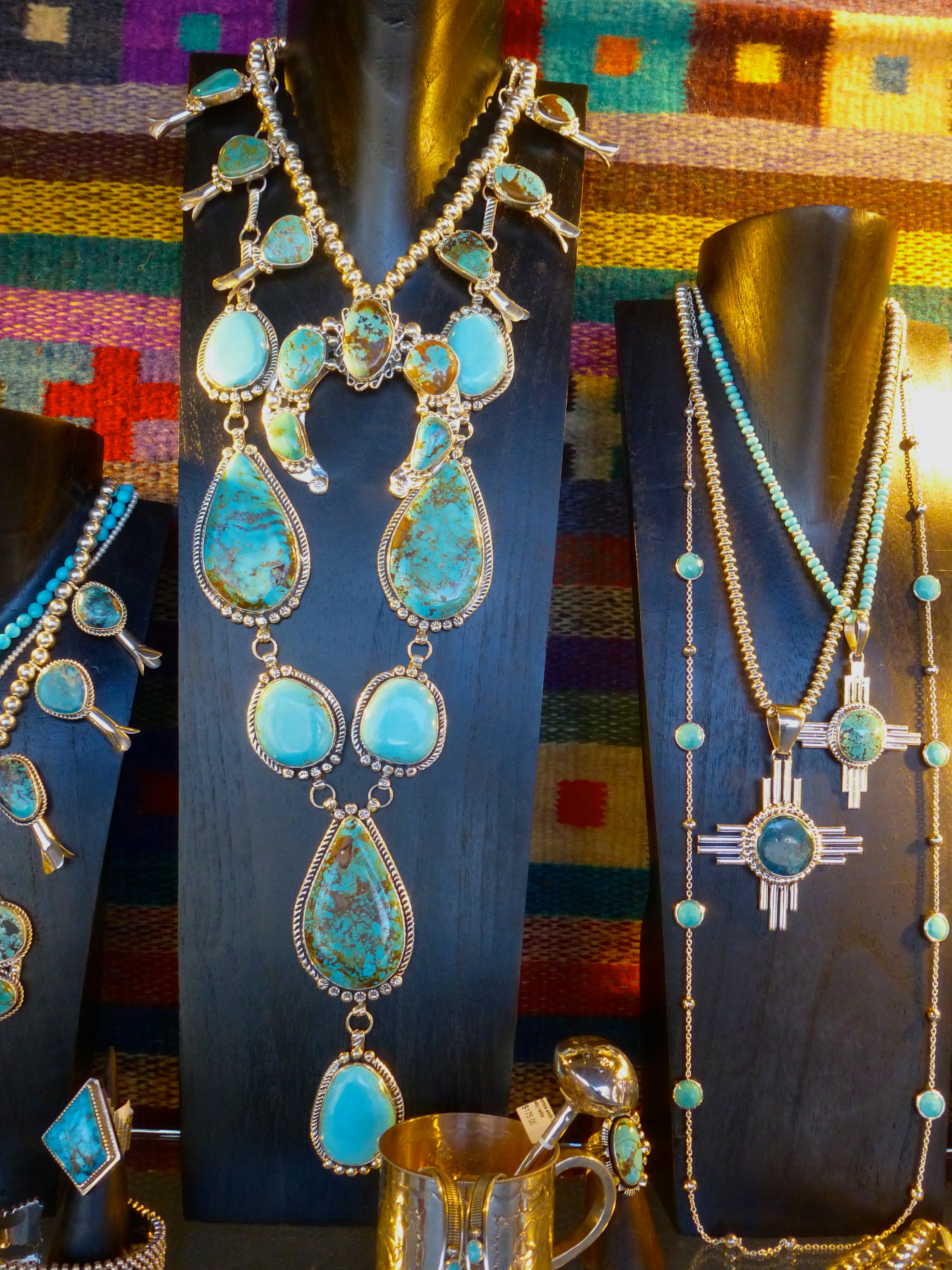 A lovely piece of greenish turquoise (Wikipedia has a nice article on the gemstone, noting that it’s been debased in recent years by artificial coloration, synthetic “stones”, and imitations.) 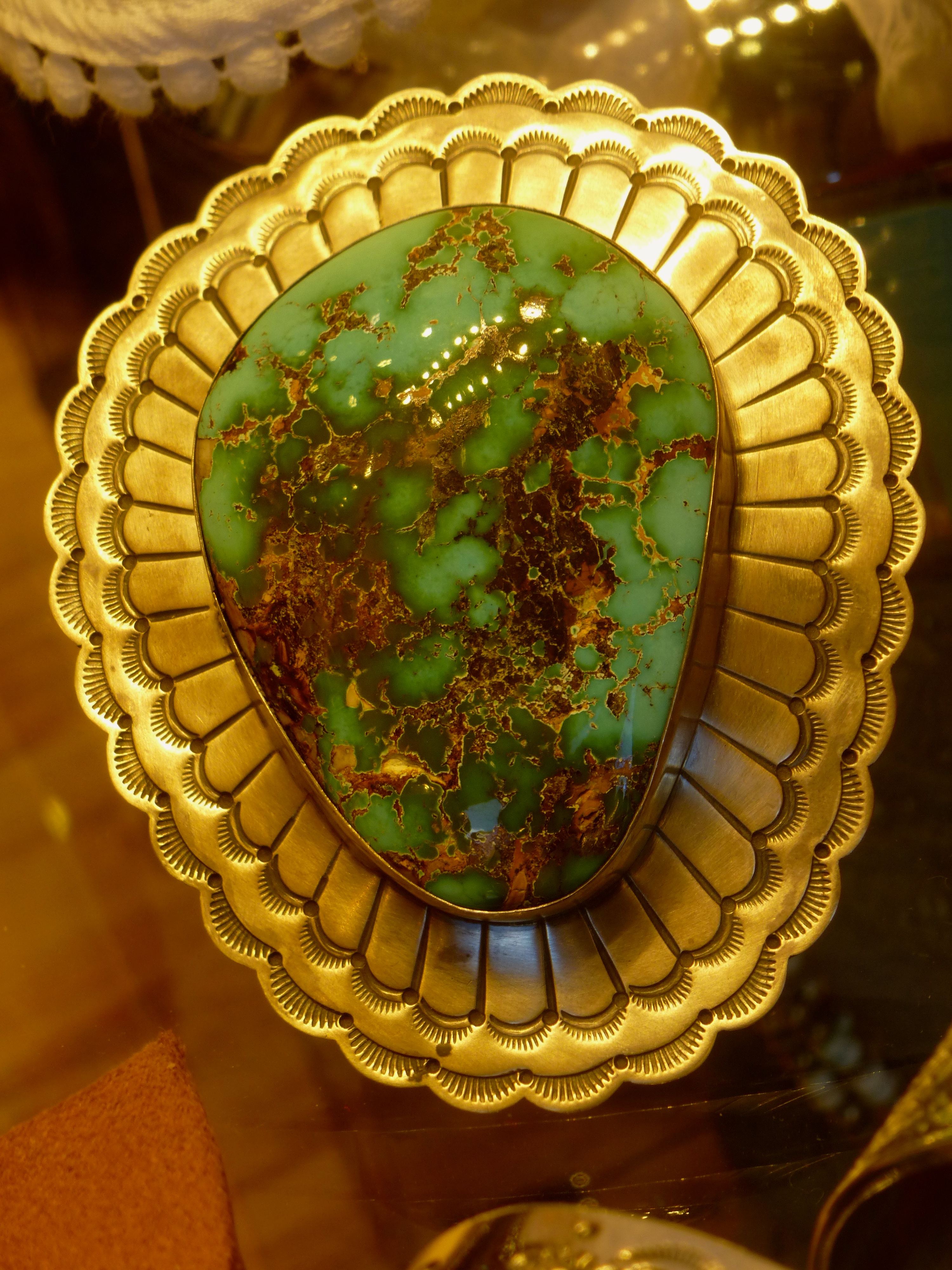 There is woo in town. I went into one rock and mineral shop (I’m a sucker for rock and fossil shops) and noticed that, in the rear, they were selling “gemstone water”, water in which gemstones are placed, conferring on the liquid a “healing power”. Pure bullshit, of course.

And here’s some other woo.  I’m sure that some of the warm drinks are okay, though without medicinal properties, but what on earth is Belly Bless™? Note the crystal- and aromatherapy. 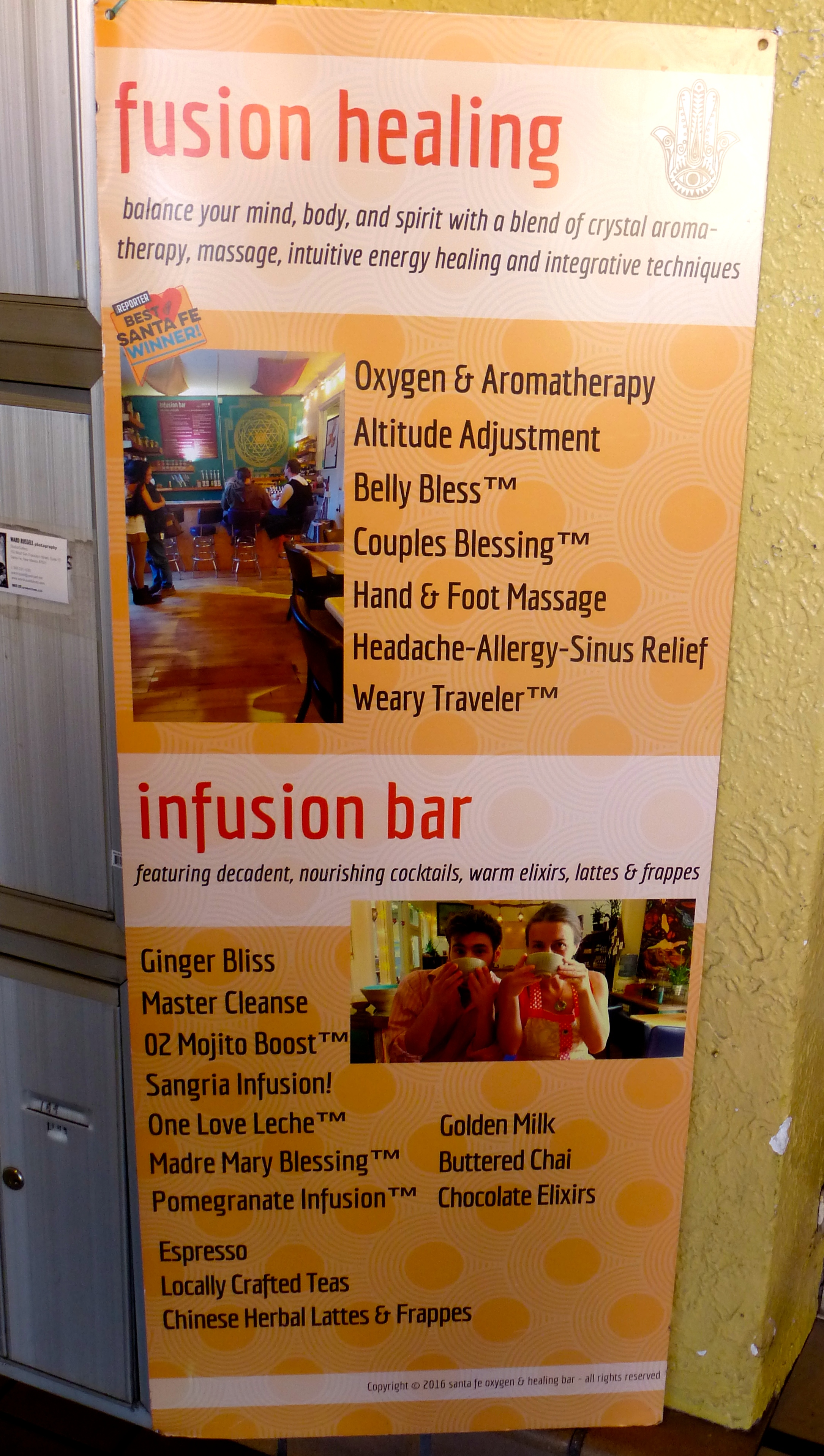 But I also found four instantiations of my Spirit Animal. The first one is particularly lovely (notice the baby): 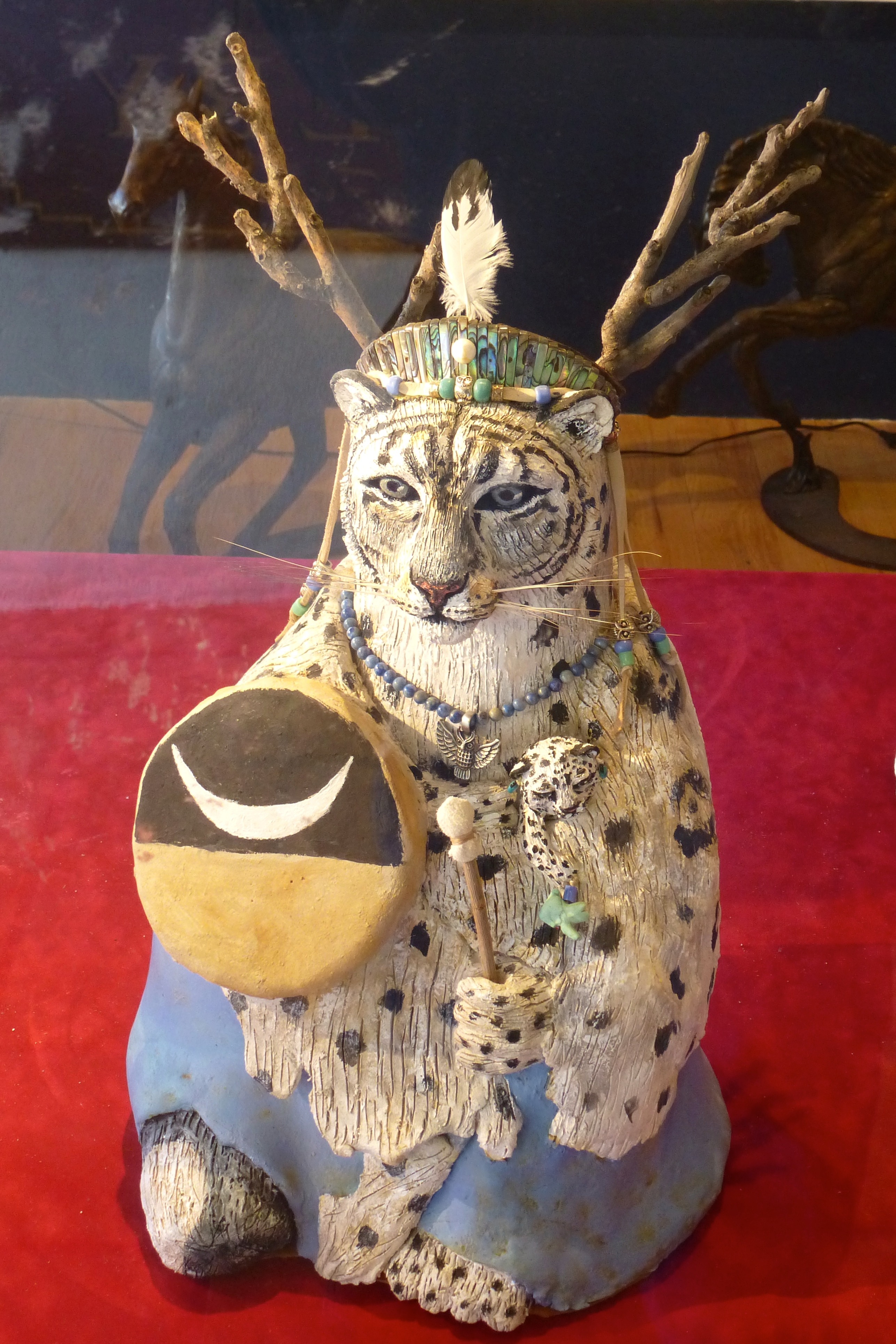 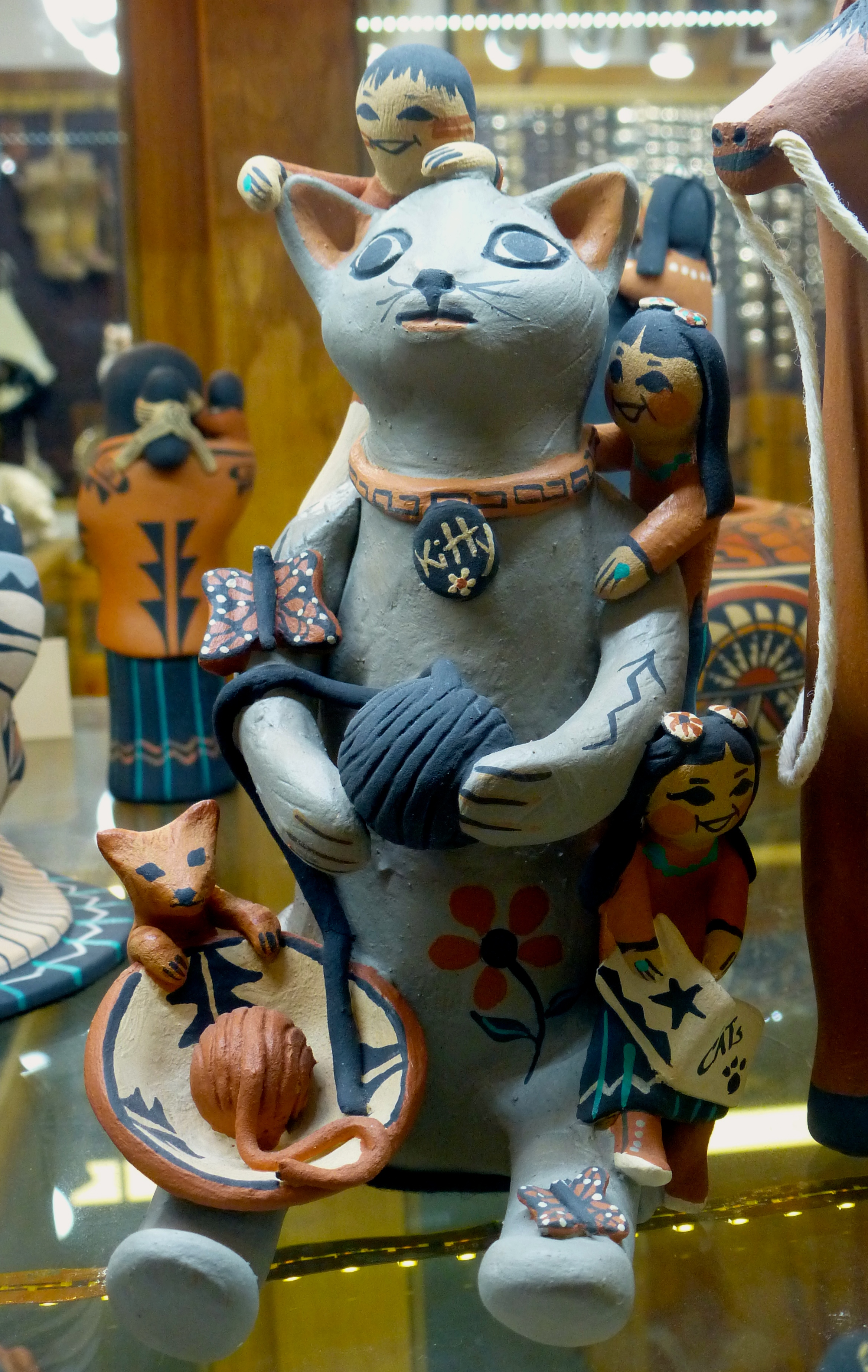 Two pumas outside an antique store: 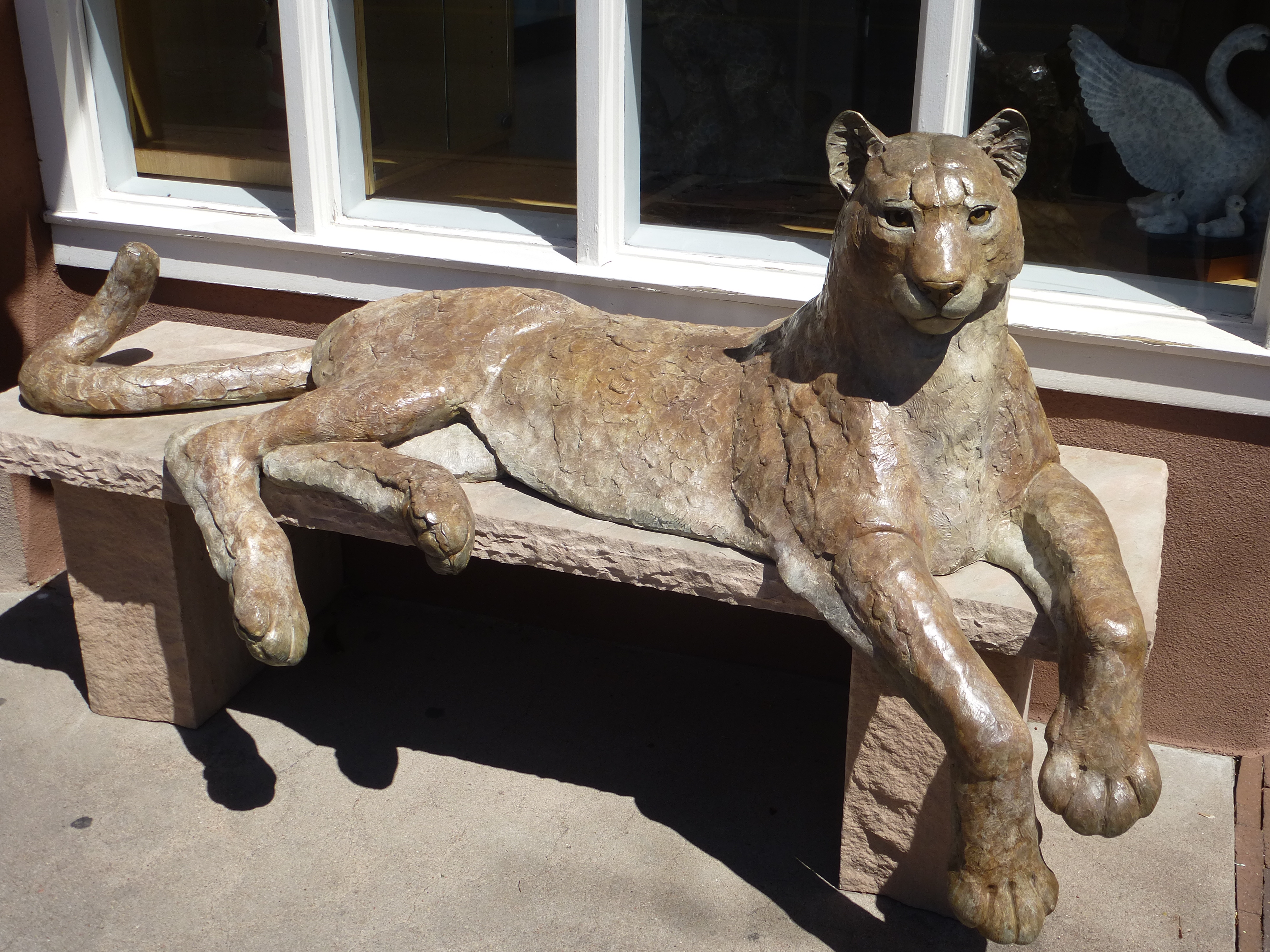 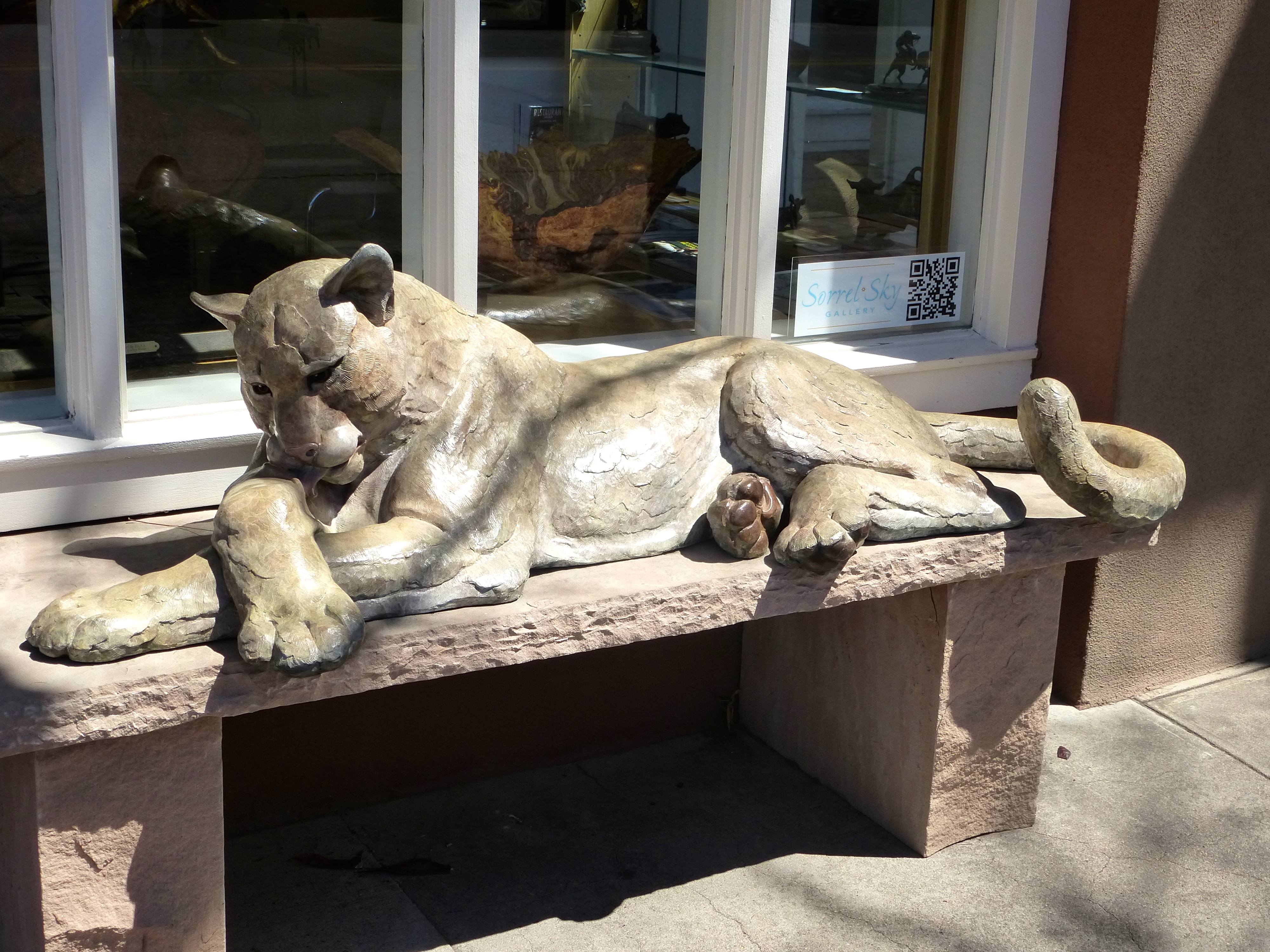 The San Miguel Chapel (also called the “San Miguel Mission”) near downtown may be the oldest church in the United States. The adobe church was, according to its website, built between 1610 and 1626, but has been damaged and rebuilt several times since then. However, the original adobe walls are still largely there under the newer stucco. (Adobe is a building material made of mud, straw, and sometimes manure, that’s dried in the sun and used as large bricks. It’s fairly durable in dry climates, but requires attention and repair even then.)

I love the adobe houses and churches of the Southwest; I’ll show more on a Taos post later, as it’s the stuff from which the Native American pueblos are made. Here’s San Miguel: 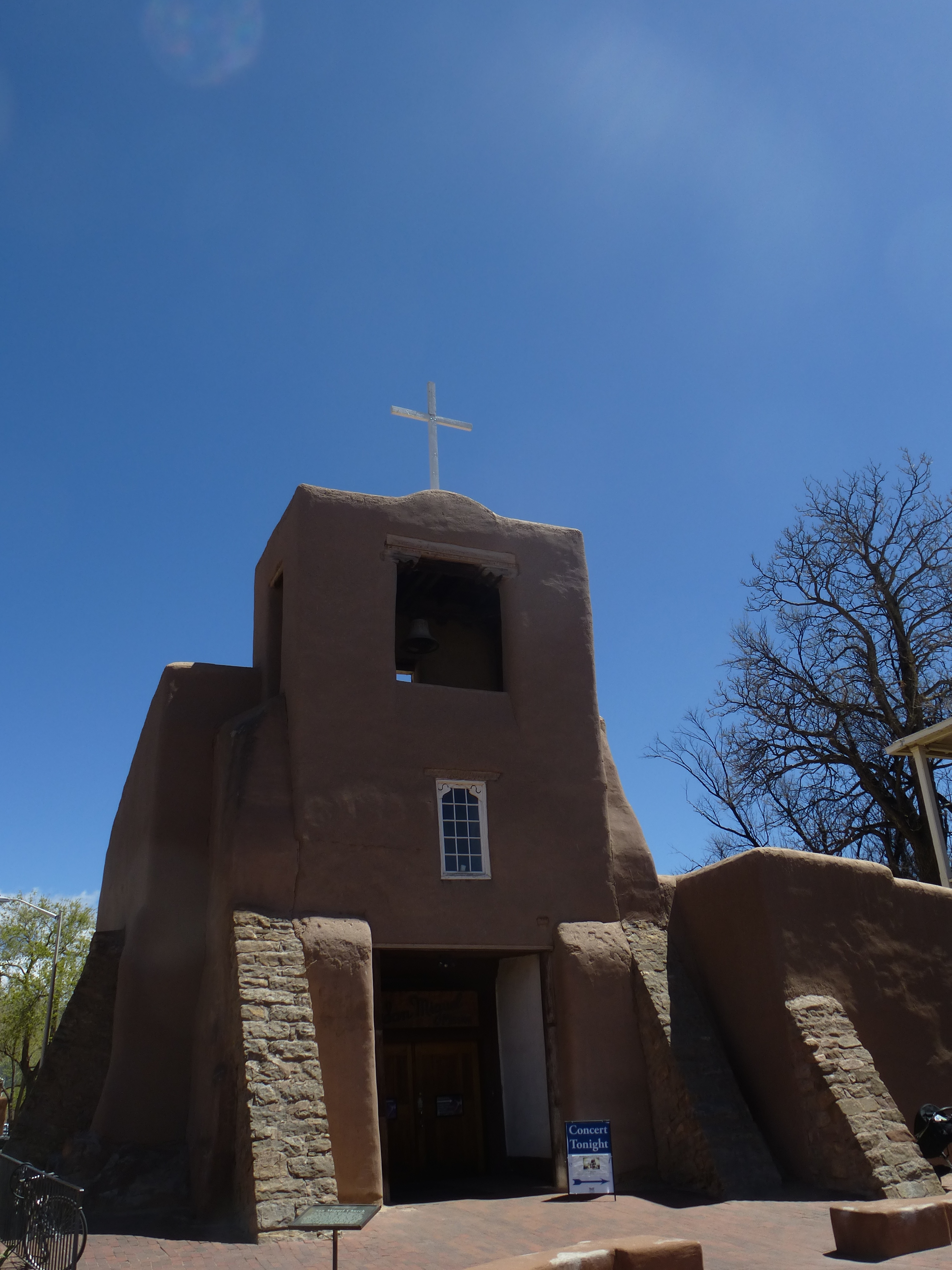 Many of these churches were built using Native American slave labor under the direction of Spanish Catholic missionaries.

Across the street is what is reputed to be America’s oldest house: the De Vargas Street House, whose age is in fact unknown, but probably was built in the 17th or early 18th centuries. Well, who knows, but it’s a lovely adobe structure that you can enter and photograph. Here’s the outside and a reconstruction of the inside (it actually once had two stories). You can see the adobe bricks where the stucco coating is gone: 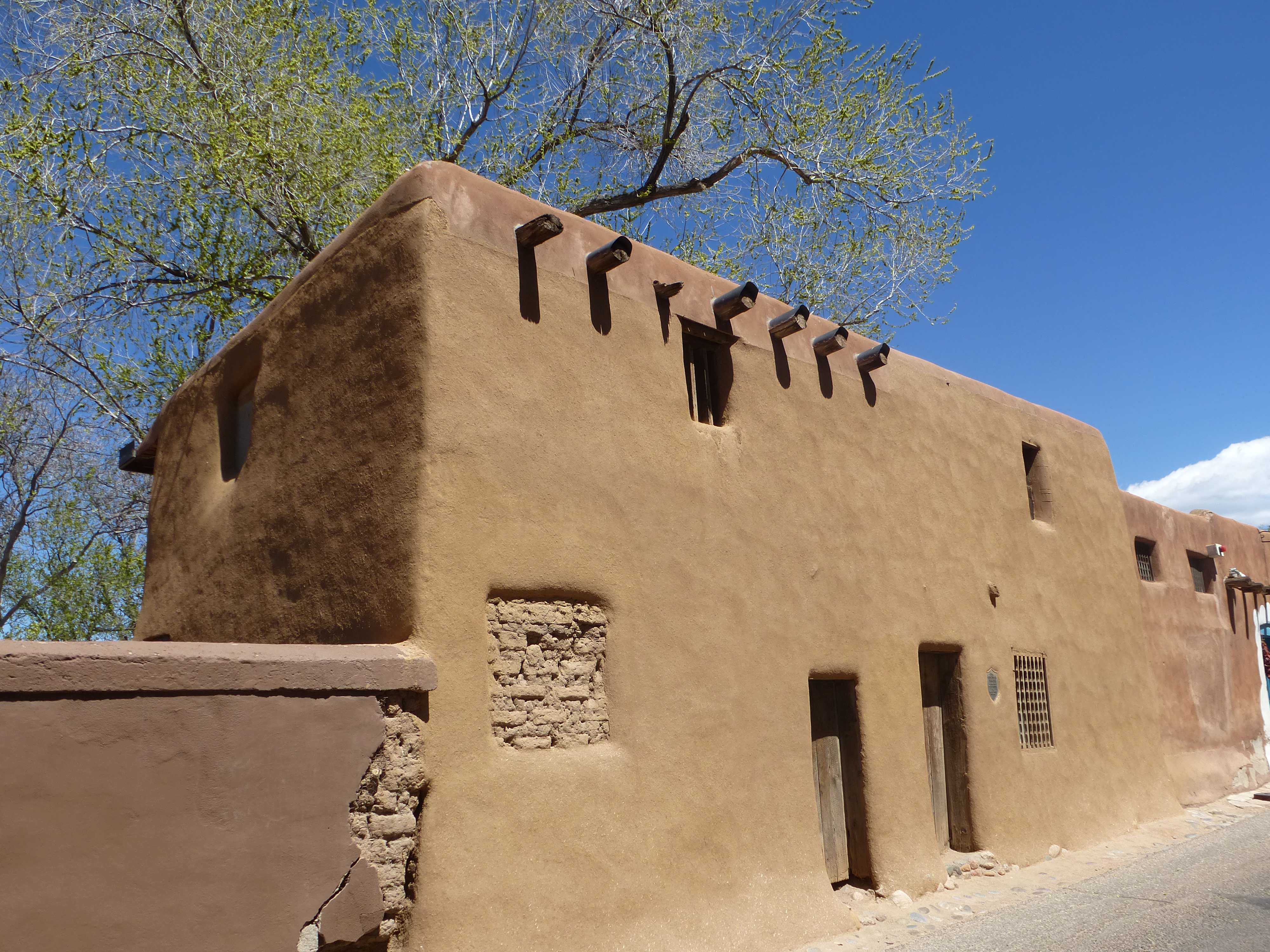 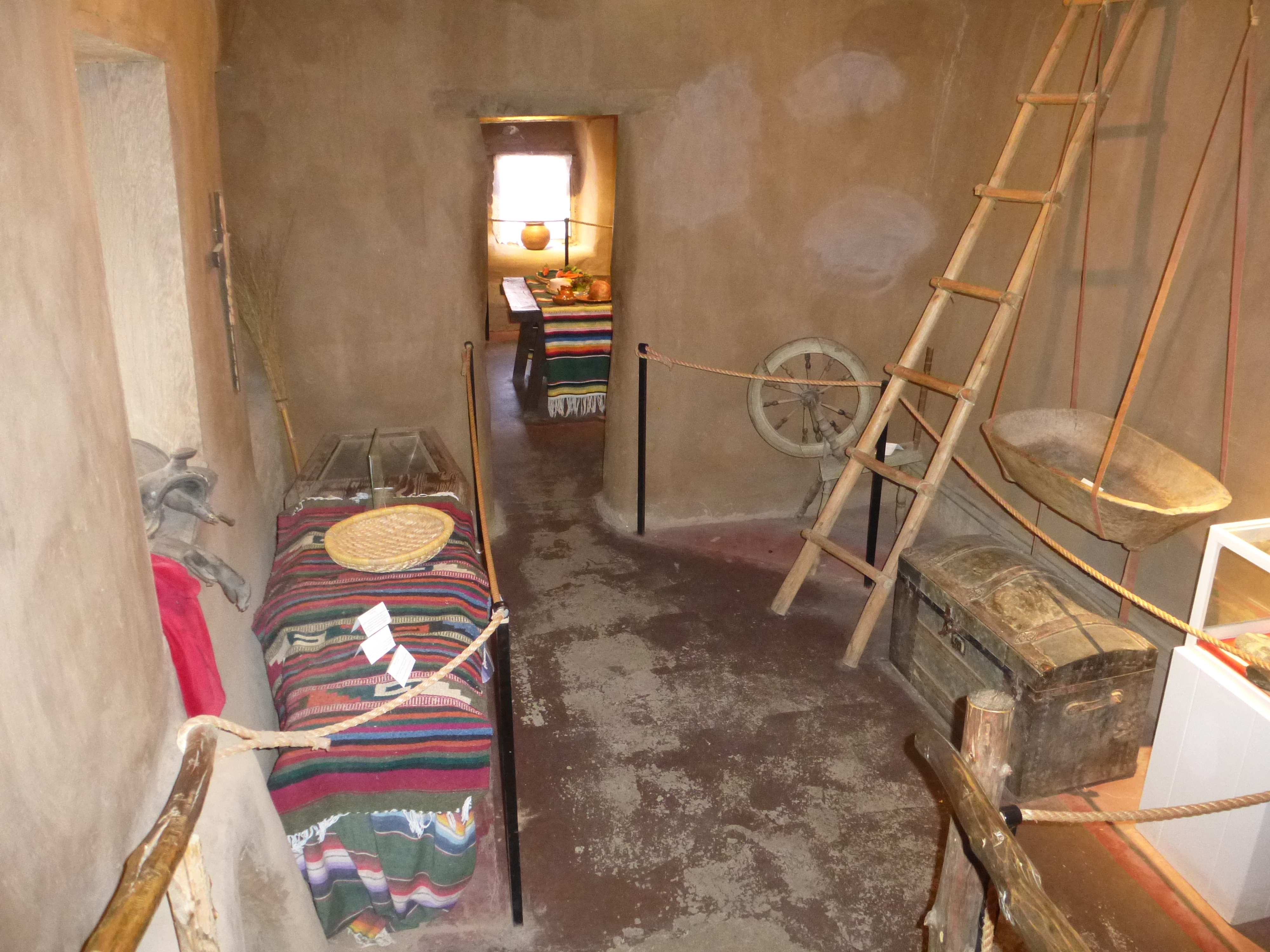 Finally, my second and last meal of the day (I did have a salted caramel milkshake as a pre-bed snack). I wasn’t hungry till about 3 pm because I’d had that huge breakfast of blue cornmeal pancakes with pinon nuts, butter, and syrup, which stayed with me for hours.

A nice woman at the tourist office recommended lunch at one of her favorite places near downtown, Del Charro’s, which has good draft beer and decent local cuisine. I had the blue corn chicken enchiladas, washed down with a superb local red craft ale, not too hoppy. (I deplore the tendency of brewers to overhop their beer in America, almost as if they’re in a contest to make the bitterest one-note ale.) This is a record day for me: I had blue corn food for both breakfast and lunch. 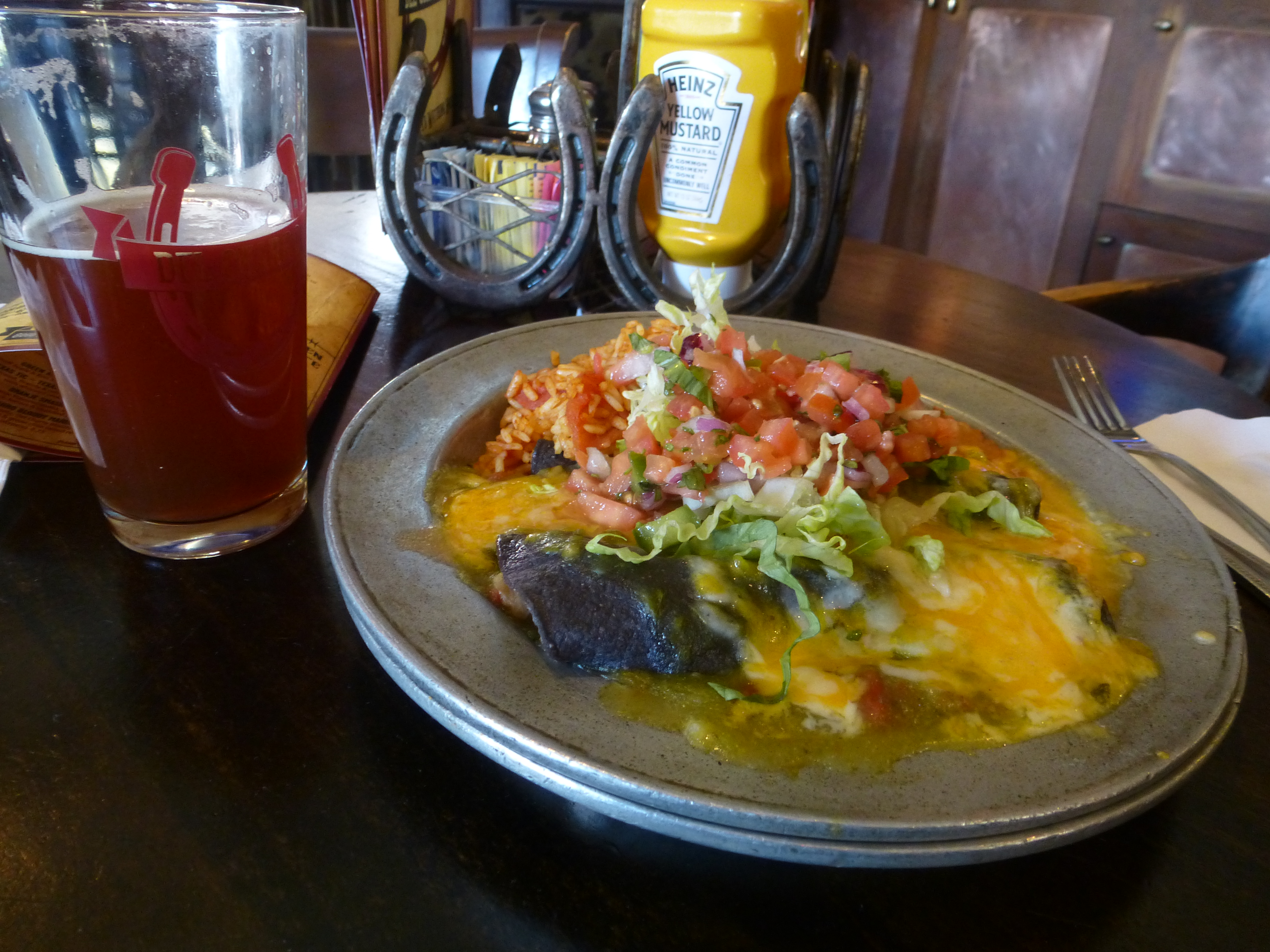 Tomorrow (or when I get a chance): a visit to lovely Taos.