UPDATE: Reader Brian called my attention to an NPR article reporting that young people are much more likely to lie on polls than are their elders; perhaps that explains the result below. As he noted, “This does not explain the link between religion and flat earth that you observed, which is definitely interesting, but this may very well make us skeptical of the results of such polls.  I do not believe that this ‘mischievous responder; phenomenon will explain all of the recent rise in flat-earth conspiracy belief, but I at least hope this accounts for some of it.”

A first I thought this was an April Fools joke, but the date didn’t comport, and it was reported reported by CBS News, ” which led me to the YouGov poll site. CBS reports a sample size of 8,215 Americans.  The first graph shows the results for the entire sample, showing that only 84% of them have always believed in a round (well, “spherical” is more accurate) Earth, with 9% having some doubts or being flat-Earthers. 7% aren’t sure!  Don’t they know the data? 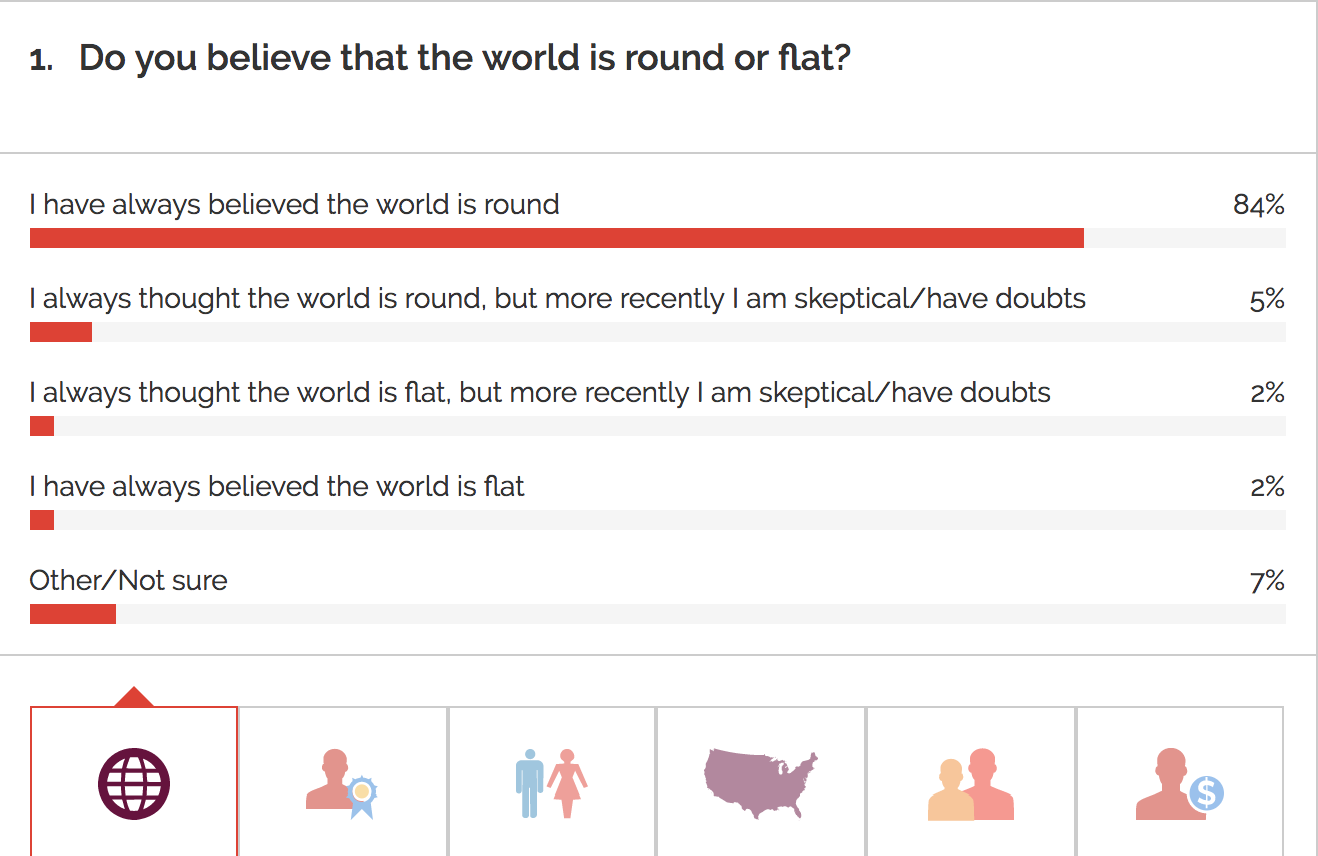 When you divide it up by age, the youngest group, 18-24 years of age, show only 2/3 accepting the world is round, with 18% having some doubts (or being flat-Earthers) and 16% being sure. The proportion of round-Earthers rises with age, with fully 94% of those over 55 saying they’ve always believed the world is round. What are they teaching the kids in school these days? Or haven’t they looked at the photos from space? 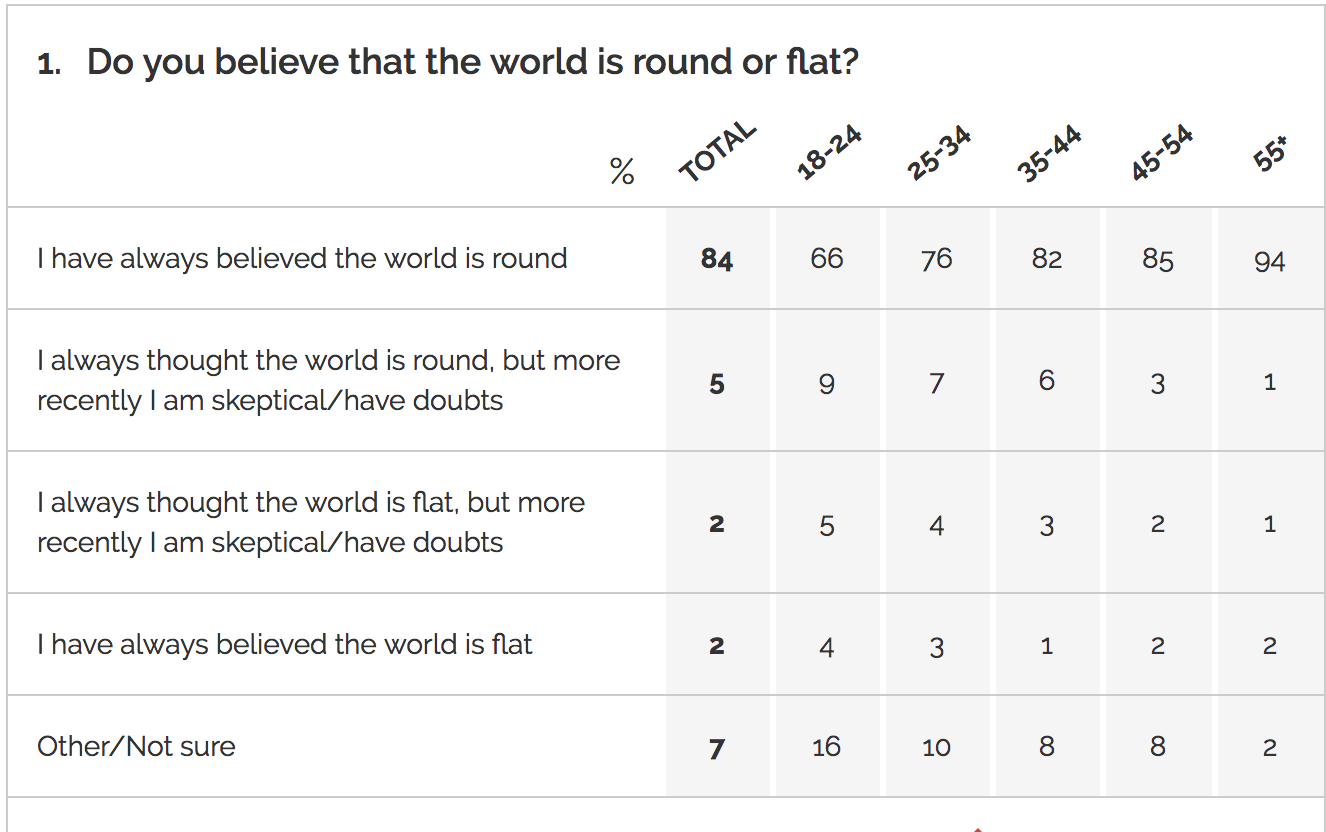 As one might expect, flat-Earthers tend to be more religious than “evidentialists”. After all, if you believe in the delusions of faith, you can believe anything. Since the YouGov supplementary page shows that there is a flat-earth control, these people are probably those who have always believe in Pancake Earth, though it’s not clear which of the four groups are included. It’s interesting that in the total sample, 42% of Americans consider themselves either “not very religious” or “not religious at all.” 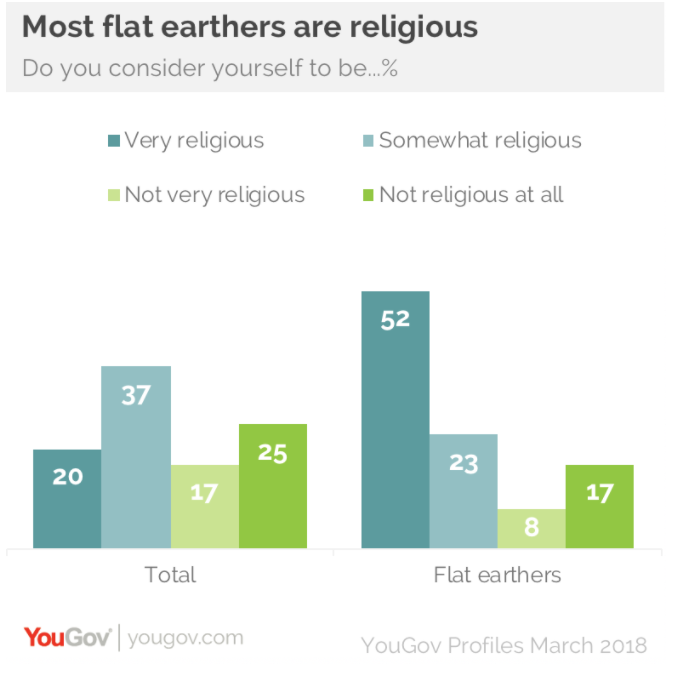