Steve is doing a full-court press publicizing his new book, Enlightenment Now: The Case for Reason, Science, Humanism, and Progress, which has now risen to #10 on Amazon.  And this publicity is exactly what I’d be doing if I had his renown and intellectual chops. At any rate, I’ll call your attention to three news items that are based on the book, including two excerpts or rewrites.

The first is from The Chronicle of Higher Education, and you can see it by clicking on the screenshot below.  It’s fairly similar to Steve’s 2013 piece in The New Republic, “Science is not your enemy“, in that it calls for an infusion of science into some areas of the humanities while still extolling those areas of the humanities, like literary interpretation, that have little to do with science.  That piece drew an intemperate response from literary editor Leon Wieseltier in the same magazine, “Crimes against humanities” (Subtitle: Now science wants to invade the liberal arts. Don’t let it happen.”)

Nevertheless, check out the comments after the Chronicle piece to see the humanities scholars fighting for their turf. There’s no need to, really. Their endeavors are a vital part of a liberal education, and I, for one, would have had a much poorer life were it not for my English, fine arts, philosophy, and ancient history courses in college. By suggesting that some areas of the humanities could benefit from a more quantitative and empirical (i.e., scientific) approach, Steve has been criticized as “scientistic”, and I expected this misguided kvetching will get even louder when people read the book. 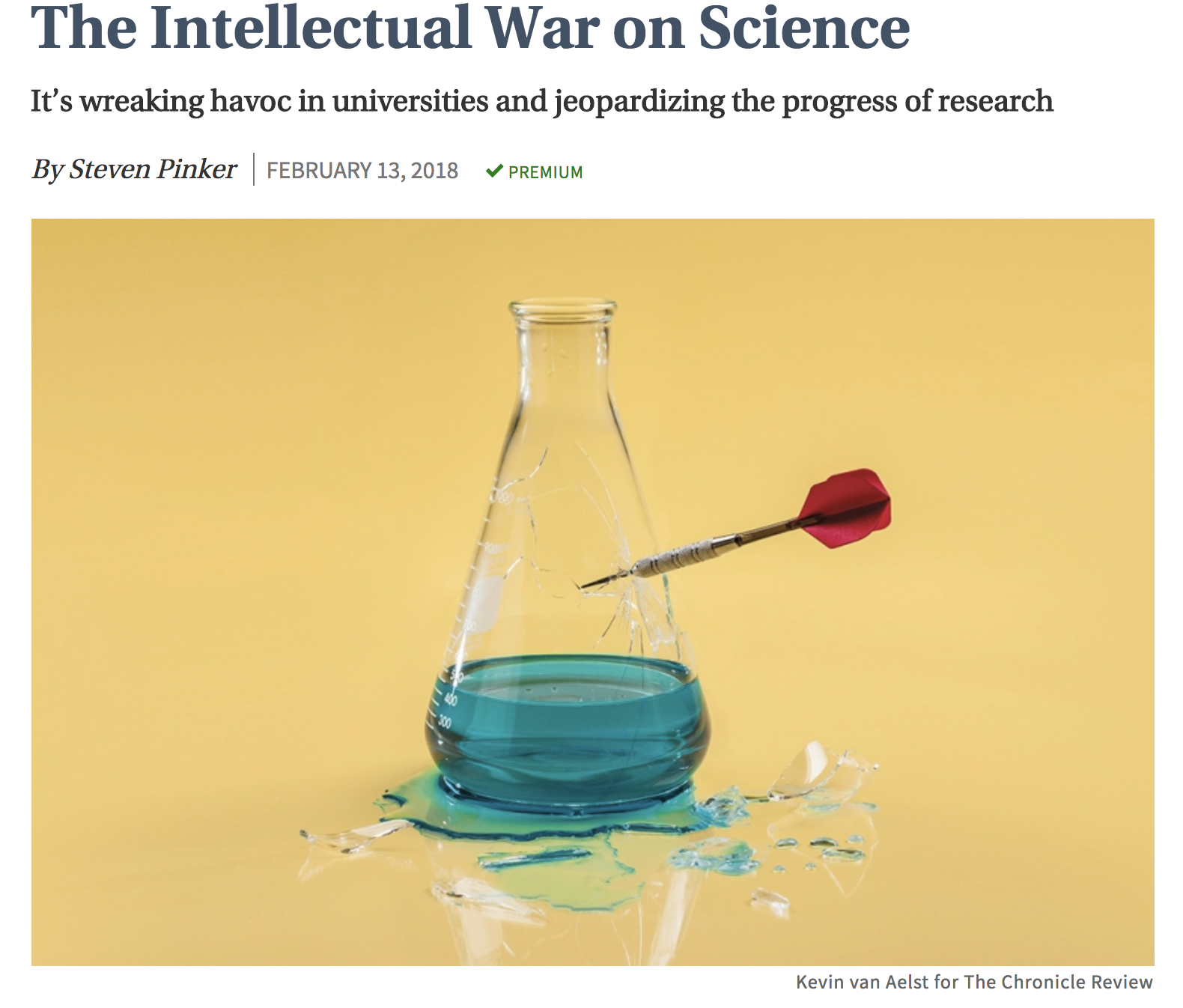 This week Pinker also gave an interview on NPR’s program 1A (I’ve listened only to the first bit).  It’s still up, and you can hear the 35-minute show, in which Pinker discusses his new book, by clicking on the screenshot below. From the part I’ve heard, he shows his usual eloquence, speaking in full paragraphs that, if written out, would also be excellent prose. 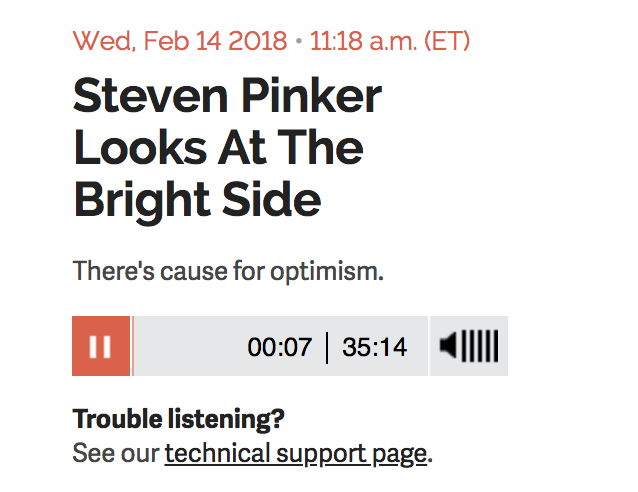 Finally, there’s this, which I quite like. I’ve thought a lot about identity politics but never as clearly or succinctly as Pinker. This is from The Weekly Standard, a venue I never go to.

This is clearly connected with the new book, and is an interview with Adam Rubenstein. I’ll give just one or two excerpts (I especially like the last paragraph of this first excerpt):

Steven Pinker: Identity politics is the syndrome in which people’s beliefs and interests are assumed to be determined by their membership in groups, particularly their sex, race, sexual orientation, and disability status. Its signature is the tic of preceding a statement with “As a,” as if that bore on the cogency of what was to follow. Identity politics originated with the fact that members of certain groups really were disadvantaged by their group membership, which forged them into a coalition with common interests: Jews really did have a reason to form the Anti-Defamation League.

But when it spreads beyond the target of combatting discrimination and oppression, it is an enemy of reason and Enlightenment values, including, ironically, the pursuit of justice for oppressed groups. For one thing, reason depends on there being an objective reality and universal standards of logic. As Chekhov said, there is no national multiplication table, and there is no racial or LGBT one either.

This isn’t just a matter of keeping our science and politics in touch with reality; it gives force to the very movements for moral improvement that originally inspired identity politics. The slave trade and the Holocaust are not group-bonding myths; they objectively happened, and their evil is something that all people, regardless of their race, gender, or sexual orientation, must acknowledge and work to prevent in the future.

Even the aspect of identity politics with a grain of justification—that a man cannot truly experience what it is like to be a woman, or a white person an African American—can subvert the cause of equality and harmony if it is taken too far, because it undermines one of the greatest epiphanies of the Enlightenment: that people are equipped with a capacity for sympathetic imagination, which allows them to appreciate the suffering of sentient beings unlike them. In this regard nothing could be more asinine than outrage against “cultural appropriation”—as if it’s a bad thing, rather than a good thing, for a white writer to try to convey the experiences of a black person, or vice versa.

My one beef with this is that there still is very real oppression of non-binary people, women, and gays in the U.S. and other parts of the world—that is not a “multiplication table” or a myth. It is an objective reality, even if, at least in America, such oppression is not “institutionalized” in law.  But I agree with him that cries of “cultural appropriation” are almost always risible, and will hinder rather than improve the world.

AR: There is, as you recognize a “liberal tilt” in academia. And you write about it: “Non-leftist speakers are frequently disinvited after protests or drowned out by jeering mobs,” and “anyone who disagrees with the assumption that racism is the cause of all problems is called a racist.” How high are the stakes in universities? Should we worry?

SP: Yes, for three reasons. One is that scholars can’t hope to understand the world (particularly the social world) if some hypotheses are given a free pass and others are unmentionable. As John Stuart Mill noted, “He who knows only his own side of the case, knows little of that.” In The Blank Slate I argued that leftist politics had distorted the study of human nature, including sex, violence, gender, childrearing, personality, and intelligence. The second is that people who suddenly discover forbidden facts outside the crucible of reasoned debate (which is what universities should be) can take them to dangerous conclusions, such as that differences between the sexes imply that we should discriminate against women (this kind of fallacy has fueled the alt-right movement). The third problem is that illiberal antics of the hard left are discrediting the rest of academia, including the large swaths of moderates and open-minded scholars who keep their politics out of their research. (Despite the highly publicized follies of academia, it’s still a more disinterested forum than alternatives like the Twittersphere, Congress, or ideologically branded think tanks.) In particular, many right-wingers tell each other that the near-consensus among scientists on human-caused climate change is a conspiracy among politically correct academics who are committed to a government takeover of the economy. This is sheer nonsense, but it can gain traction when the noisiest voices in the academy are the repressive fanatics.

This, using words like “repressive fantatics” (I agree!) is about as explicit as he gets about the foibles of the Left. And you can be sure that the usual suspects will be going after Steve, calling him an “alt-righter”, a misogynist, or even a racist for sentiments like these.

The last question posed to Pinker is this: “What should the president be reading? And why?” I’ll let you read the answer for yourself (hint: it doesn’t involve Pinker’s books).

I’ll be starting Enlightenment Now this weekend. It’s a big ‘un, and will take a while, but stay tuned for my take.

34 thoughts on “Pinker on the science “wars”, identity politics, and his new book”