Everybody knows that, among the Left, “Islamophobia” is a cardinal sin, even when it refers not to bigotry against Muslims but criticism of Muslim beliefs. Certainly real bigotry against individuals, or invidious stereotypes against groups, should be decried, as it is for anti-black racism. In fact, one characteristic of the Left is its sympathy for groups perceived to be oppressed or the target of discrimination in history.

Except for the Jews, that is, despite the fact that their demonization and oppression are common knowledge.

Here are the latest FBI date on hate crimes from the last year they’ve been reported—2016: 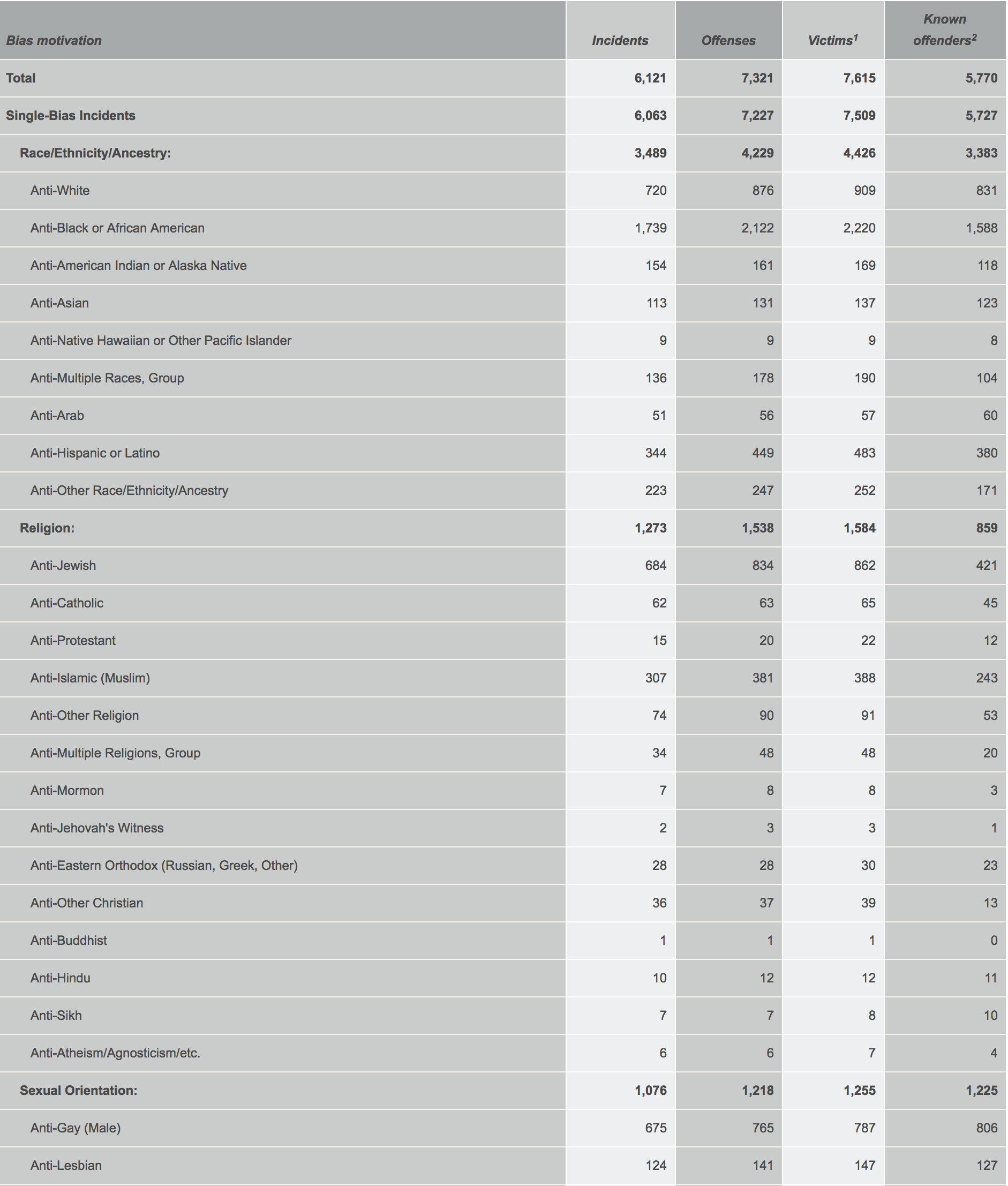 Just taking incidents in that year, the most frequent hate crimes were against blacks (1,739), gays (799 including lesbians), whites (720), and Jews (684).  Muslims were victims of 307 incidents, fewer than Hispanics.  Even without dividing these by the number of victims to get a per capita rate, it’s clear that anti-Semitism is manifested twice as often as “Islamophobia”. I also am not sure what an “anti-white” hate crime is, or who perpetrates them. Perhaps readers can help here.

As far as number of victims are concerned, it’s 2,220 for blacks, 933 for gays, 909 for whites, and 862 for Jews. 388 Muslims were victims of hate crimes.  To get a rough probability that an individual of a given religion or ethnicity was the victim of a hate crime, we simply divide the number of hate crimes in each class by the number of individual victims in that class. When we do that, we get this:

On a per capita basis, then, the decreasing order of probability of being a victim goes this way: Jews, Muslims, blacks, gays, and whites. Jews edge out Muslims in terms of hate crimes per capita, but you hear a lot more about the latter than the former.

Why is that? My own guess was twofold: Jews are perceived as “white” compared to blacks and Muslims, and therefore not “people of color”; and because the demonization of Israel somehow takes the sting out of anti-Semitism—perhaps because people feel that Jews somehow deserve anti-Semitism because of the actions of their religion’s “apartheid state”. (Remember, though, that these are American Jews, and Muslims are often as “white” as Jews.)

The Forward, though, has an interesting take on this. In their recent piece, “How anti-Semitism’s true origin makes it invisible to the Left,” author Jean-Paul Pagano suggests that Jews aren’t really perceived, like the other groups, as oppressed. Rather, they’re seen as a wicked but clever cabal that, through almost supernatural powers, have taken control of money, business, show business, banks, the government, and so on. That is, Jews are seen as a conspiracy rather than a subjugated group, which makes their demonization easier to swallow. A few quotes:

. . . in a key sense, regular racism — against blacks and Latinos, for example — is the opposite of anti-Semitism. While both ultimately derive from xenophobia, regular racism comes from white people believing they are superior to people of color. But the hatred of Jews stems from the belief that Jews are a cabal with supernatural powers; in other words, it stems from the models of thought that produce conspiracy theories. Where the white racist regards blacks as inferior, the anti-Semite imagines that Jews have preternatural power to afflict humankind.

This is also why the left is blind to anti-Semitism. Anti-Semitism differs from most forms of racism in that it purports to “punch up” against a secret society of oppressors, which has the side effect of making it easy to disguise as a politics of emancipation. If Jews have power, then punching up at Jews is a form of speaking truth to power — a form of speech of which the left is currently enamored.

In other words, it is because anti-Semitism pretends to strike at power that the left cannot see it, and is doomed to erase — and even reproduce — its tropes.

Although conspiracy theories about Jews are rife in the Middle East, they’ve also infected the U.S., though Pagano gives just a few examples (e.g.. claims that I sometimes hear that Israel is engaged in training U.S. police to kill blacks, that Israelis take the organs of Palestinian babies, etc.). A few more quotes:

Above all else, anti-Semitism is a conspiracy theory about the maleficent Jewish elite. And it’s this that makes it easy to disguise as a politics of liberation, or, at least, to embed anti-Semitism quietly in efforts for social justice.

You can see this in the resuscitated efforts of groups like Black4Palestine and Jewish Voice for Peace to portray Israel and America as bastions of capitalist white supremacy that collude to brutalize people of color.

In the early part of the decade, Ethiopian-Israeli women charged that state-mandated health providers had used shady means to depress their fertility with the contraceptive Depo-Provera. The government denied coercion, but questions remain about the validity of its probe. This was not enough for Black4Palestine, which declared that “[Israel] has sterilized Ethiopian Israelis without their knowledge or consent.”

Narrowly, the effect of alleging sterilization invokes the Nazi specter of eugenics. But more broadly, the conspiracy theory summons medieval fears of Jewish magic harming sexual function, which live on in the Arab world.

For its part, JVP launched a national effort to promote the idea that Israel teaches U.S. law enforcement how to inflict “systemic” racism on people of color, “including extrajudicial executions, shoot-to-kill policies, police murders, racial profiling, massive spying and surveillance, deportation and detention, and attacks on human rights defenders.”

It’s critical to note that Americans are not accustomed to recognizing, let alone understanding, a sizable portion of anti-Semitism, because it typically doesn’t resemble anti-blackness — the horrific down-punching form of racism that haunts American history and reverberates into the present.

Well, it’s an interesting view, but I’m not sure I’m totally on board. I’ll just throw it out for discussion.

The “normalization” of anti-Semitism (sometimes called “anti-Zionism”, which I think is pretty much the same thing), is evidenced by this cartoon that appeared in the Daily Californian, the University of California at Berkeley student newspaper, when Alan Dershowitz spoke there last October. It reeks of “blood libel” and other anti-Semitic tropes that are the daily fare of government propaganda in the Middle East—propaganda that Western news studiously ignores. The cartoon was eventually removed when there was an outcry (see my post here). 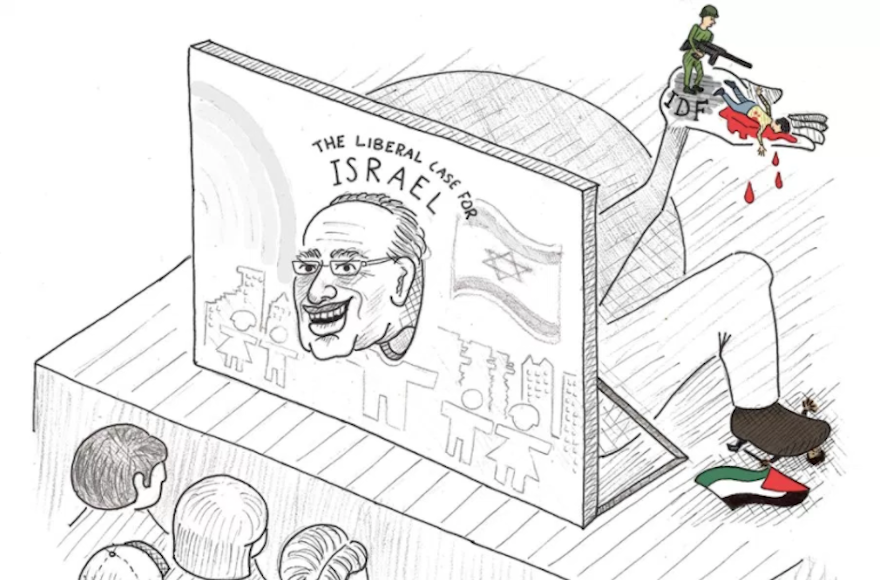 As I said, I’m not sure how much I agree with the “cabal” theory for the normalization of anti-Semitism, but it’s an interesting thought; and I’d be glad to hear reader’s takes. What seems clear is that hate crimes against Jews aren’t publicized or recognized nearly as much as hate crimes against other groups, even though Jews are, on a per capita basis, the most frequent target.

69 thoughts on “Why isn’t anti-Semitism as reviled as “Islamophobia” or anti-black racism?”