My friend and colleague Jon Losos has recently published a book, Improbable Destinies: Fate, Chance, and the Future of Evolution (Riverhead Books, New York) that will be of considerable interest to WEIT readers. The main question addressed by the book is this: To what extent is the course of evolution predictable? And, in particular, what do the phenomena of convergence tell us about the answer(s) to this question. 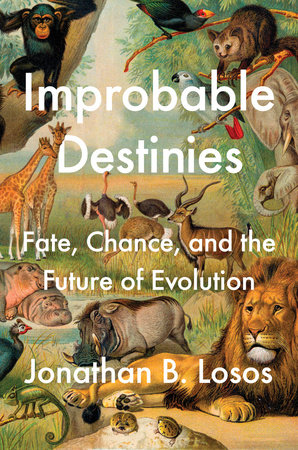 Jon is best known for his work on the adaptive radiation of West Indian Anolis lizards, and anoles are famous for displaying convergent community structure on the islands of the Greater Antilles: the same ecologies, morphologies, and behaviors have evolved multiple times among the islands of the archipelago. On each of the Greater Antilles, a suite of sympatric lizards have evolved independently, and each island’s suite contains species of analogous morphology and behavior, each analogue associated with particular stations in the vegetation.

The similarities in ecological structure and function across phylogenetically independent lineages of anoles is quite striking, and has been hailed as an example of how natural selection can mold recurring adaptations. When I told my thesis advisor, Dick Lewontin, that I could predict the ecology and morphology of the next species of anole to evolve on Jamaica, Dick, who was not a fan of the supposed ubiquity of adaptation, was a combination of dismayed and mildly dubious.

So, in this book, someone who is arguably ‘Mr. Community Convergence’ takes a broader look at evolutionary convergence for a general audience. The book is written in a colloquial, conversational style, the text sprinkled with puns, alliteration, cultural allusions (e.g. the Horta), words like “bamboozled”, “glom” and “Aussie”, at least one neologism (“arboles”, for big trees, partly a borrowing from Spanish, but also undoubtedly influenced by the English word ‘anoles’, itself a borrowing from Carib through French), and, shockingly for an academic, correct use of the word “rubric”. Reading it, in fact, provides an experience very much like talking with the author. While conversational tastes may differ, I regard this as a plus for the book, and a plus for its non-scientist readers. The approach also advances one of Jon’s other goals in the book, which, as we’ll see, is to put a human face on the practice of science.

He begins by surveying the phenomena of natural history for evidence of predictability and evolutionary convergence. The phenomena are manifold: from convergent traits (long nectar sipping bills), to whole organisms (ichthyosaurs and dolphins), to whole communities (Greater Antillean anoles); and a long set of rules about how animals respond to particular environmental conditions. Rodents, for example, get big on islands, while elephants get smaller, and warm blooded animals in the arctic have short legs, and in deserts they are pale. The list goes on.

Jon recounts many such cases. In discussing the case of anoles, he includes a lot of his own experiences in growing up to be a herpetologist, and this is where we see clearly the second main theme of the book, which is to show how it is scientist’s do their work, and how they come to study the things they study. But after recounting these cases, he also devotes a chapter to evolutionary idiosyncrasy, the “one-offs” of evolution, like aye-ayes, the grub-digging primates of Madagascar, and, much though Simon Conway Morris might wish it weren’t so, that other really unique primate, Man.

Jon knows, though, as Stephen Jay Gould liked to say, that all questions in natural history are ones of relative frequency. Almost anything you can think of in natural history occurs– but does it occur very often? Jon concludes that Conway Morris has shown convergence to be more common than some have thought, but not ubiquitous.

Switching from comparative evidence to experimental evidence, the book then switches to closely observed cases of evolutionary change in the field and in the lab. Jon now becomes a journalist, visiting research sites and the scientists who work at them, going in to the details of a number of studies. He devotes a chapter each to the guppies of Trinidad, his own experimental work on Bahamian anoles, Rothamsted Experimental Station in England, sticklebacks, fruitflies, and Richard Lenski’s monumental Longterm Evolution Experiment on E. coli (which gets two chapters). A feature of each of these chapters are interviews with the scientists involved, who recount their motivations for the work, how they conducted it, and, in many cases, how their own interpretations have evolved over time.

In these chapters we see the scientists’ and the author’s views changing (evolving?), but eventually we want to know what the author, having reviewed the phenomena of convergence in extenso, finally concludes. And the last part of the book provides this for the reader. It is not the conclusion that Simon Conway Morris would prefer—we (i.e. humans) are not an inevitable consequence of evolution. As Jon succinctly puts it:

The fact is, we humans are an evolutionary singleton—nothing else like us has ever evolved on Earth anywhere, any time. The ubiquity of convergent evolution in general would seem to provide scant support for our evolutionary inevitability.

And what about life in general? Convergence does reveal that there are often similar ways of dealing with similar environments. But this doesn’t mean the ‘same’ organisms will recur. As Jon writes:

… here on Earth, species frequently do evolve similar features in response to similar environmental conditions. So, even if a humanoid or a platypusoid (or a chameleonoid or kiwioid) is unlikely to have evolved elsewhere, that’s not to say that extraterrestrials would look completely unfamiliar. An extraterrestrial might even be a mashup, platypus-style, of many different parts borrowed from different Earth inhabitants.

His conclusions are thus contra Conway Morris. There are certain principles (e.g., in hydrodynamics, a stiff surface parallel to the direction of motion can prevent roll) that are instantiated again and again, but how they play out depends on the starting point. If you are a toothed tetrapod, being a predator involves having sharp teeth, but not if you’re a cephalopod (which involves beaks, and not teeth at all). A number of mammalian lineages have become large herbivores living on prairies or savannas, but that does not require, as in horses and antelope,  hooves for running across the prairies– hopping works quite nicely as well, as kangaroos have shown us. Jon’s conclusion reminded me of W.K. Gregory’s notion of “habitus and heritage”. (Jon should like this comparison, since, as an undergraduate student of E.E. Williams, who was a student of Gregory, Jon is Gregory’s academic grandson.) According to Gregory, an organism’s habitus are those features of the organism which adapt it to its immediate conditions of existence, while it’s heritage are those features that it has inherited from its ancestors– the accumulated ‘adaptive wisdom’ of its progenitors. The habitus features must be derived from the existing heritage features, not ab initio from some engineer’s optimal solution. Thus the same conditions of existence may be adapted to very differently by different organisms with different heritages. Birds have evolved into large herbivores– geese on Hawaii, for example; and into large predators– eagles in general, and Haast’s eagle as a particularly striking example. But they don’t wind up looking like cattle or big cats. Where you go depends on where you are.

(Full disclosure: I am the unnamed graduate student on p. 58, and I am thanked in the acknowledgements. But my role in the book is minuscule, and I was thanked for providing a few minor facts,)