The eminent paleobiologist Simon Conway Morris, who did seminal work on the Burgess Shale Fauna, has a new book out. Published on January 19, it’s called The Runes of Evolution: How the Universe Became Self-Aware. And it was published by Templeton Press, which should tell you something about its contents. 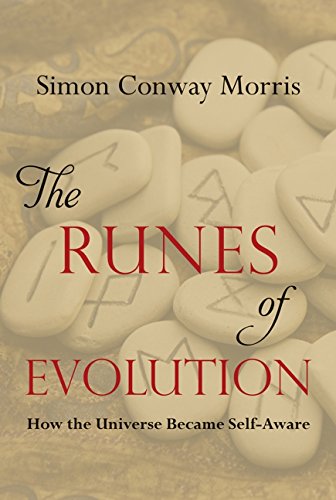 Now the subtitle does seem to be a bit wooish and Deepak-ish: in fact, more than a bit, for the Universe is certainly not self-aware, at least in the sense that it has a Big Mind that can produce awareness. Unless, that is, if you believe in God, which Conway Morris certainly does (he’s a devout Christian). And I suspect, and am willing to bet, that the message of this book is that the evolutionary phenomenon of convergence—its nominal topic—gives evidence for the deity. Like Conway Morris’s previous book, it is probably a work of natural theology.

In 2003 Conway Morris produced a fat book called Life’s Solution: Inevitable Humans in a Lonely Universe. Much of the book was quite good, for it was the first concerted attempt to document the phenomenon of “evolutionary convergence.” This is the phenomenon whereby unrelated species evolve similar traits in response to similar selective pressures, so they “converge” in the way they look.

There are lots of examples of such convergence; one of the most famous is the way that marsupial and plancental mammals, though their ancestors diverged about 160 million years ago, have produced species that look very similar. Here’s a picture of several convergences from The Roaming Naturalist; I have a similar picture in Why Evolution is True and give more examples below:

The problem with Conway Morris’s Life’s Solution was not its catalogue of remarkable convergences, which I found fascinating, but in its aim: to claim that evolutionary convergence gives evidence for God. That is, he used the phenomenon of convergence to argue that there are certain favored paths for evolution (which, indeed, there almost certainly are)—but that one of those paths must lead to Homo sapiens or a similarly self-aware creature (I call them “humanoids”) that can apprehend and worship God.

Lest you doubt that this is where Conway Morris was going in that book, read my post about it from 2012. (You can read about Conway Morris’s religious beliefs and denigration of atheism here.)

As I said, I haven’t yet read the new book, and I will, but the description at the Templeton Press site suggests that it’s a popular version of Life’s Solution, and with the same message—with added “self-awareness of the universe”:

How did human beings acquire imaginations that can conjure up untrue possibilities? How did the Universe become self-aware? In The Runes of Evolution, Simon Conway Morris revitalizes the study of evolution from the perspective of convergence, providing us with compelling new evidence to support the mounting scientific view that the history of life is far more predictable than once thought.

A leading evolutionary biologist at the University of Cambridge, Conway Morris came into international prominence for his work on the Cambrian explosion (especially fossils of the Burgess Shale) and evolutionary convergence, which is the process whereby organisms not closely related (not monophyletic), independently evolve similar traits as a result of having to adapt to similar environments or ecological niches.

In The Runes of Evolution, he illustrates how the ubiquity of convergence hints at an underlying framework whereby many outcomes, not least brains and intelligence, are virtually guaranteed on any Earth-like planet. Conway Morris also emphasizes how much of the complexity of advanced biological systems is inherent in microbial forms.

In anticipation that this new book will mirror the old one, including its message of human inevitability, let me reproduce something I wrote a while back criticizing the ideas that a). the evolution of humans (or humanoids) was inevitable and b). that evolutionary convergence gives us evidence for a Divine Plan. My article in the 2009 New Republic, “Seeing and believing,” reviewed two books on evolution by Kenneth Miller and Karl Giberson. Both of them use arguments similar to Conway Morris’s for why evolutionary convergence gives evidence for God. Rather than rewrite my argument (which I’ve already done in the upcoming Faith versus Fact), I’ll just reproduce a bit of what I wrote five years ago:

To support the inevitability of humans, Giberson and Miller invoke the notion of evolutionary convergence. This idea is simple: species often adapt to similar environments by independently evolving similar features. Ichthyosaurs (ancient marine reptiles), porpoises, and fish all evolved independently in the water, and through natural selection all three acquired fins and a similar streamlined shape. Complex “camera eyes” evolved in both vertebrates and squid. Arctic animals such as polar bears, arctic hares, and snowy owls either are white or turn white in the winter, hiding them from predators or prey. Perhaps the most astonishing example of convergence is the similarity between some species of marsupial mammals in Australia and unrelated placental mammals that live elsewhere. The marsupial flying phalanger looks and acts just like the flying squirrel of the New World. Marsupial moles, with their reduced eyes and big burrowing claws, are dead ringers for our placental moles. Until its extinction in 1936, the remarkable thylacine, or Tasmanian wolf, looked and hunted like a placental wolf.

Convergence tells us something deep about evolution. There must be preexisting “niches,” or ways of life, that call up similar evolutionary changes in unrelated species that adapt to them. That is, starting with different ancestors and fuelled by different mutations, natural selection can nonetheless mold bodies in very similar ways–so long as those changes improve survival and reproduction. There were niches in the sea for fish-eating mammals and reptiles, so porpoises and ichthyosaurs became streamlined. Animals in the Arctic improve their survival if they are white in the winter. And there must obviously be a niche for a small omnivorous mammal that glides from tree to tree. Convergence is one of the most impressive features of evolution, and it is common: there are hundreds of cases.

All it takes to argue for the inevitability of humanoids, then, is to claim that there was a “humanoid niche”–a way of life that required high intelligence and sophisticated self-consciousness–and that this niche remained unfilled until inevitably invaded by human ancestors. But was its occupation really inevitable? Miller is confident that it was:

“But as life re-explored adaptive space, could we be certain that our niche would not be occupied? I would argue that we could be almost certain that it would be–that eventually evolution would produce an intelligent, self-aware, reflective creature endowed with a nervous system large enough to solve the very same questions we have, and capable of discovering the very process that produced it, the process of evolution…. Everything we know about evolution suggests that it could, sooner or later, get to that niche.”

Miller and Giberson are forced to this view for a simple reason. If we cannot prove that humanoid evolution was inevitable, then the reconciliation of evolution and Christianity collapses. For if we really were the special object of God’s creation, our evolution could not have been left to chance. (It may not be irrelevant that although the Catholic Church accepts most of Darwinism, it makes an official exception for the evolution of Homo sapiens, whose soul is said to have been created by God and inserted at some point into the human lineage.)

The difficulty is that most scientists do not share Miller’s certainty. This is because evolution is not a repeatable experiment. We cannot replay the tape of life over and over to see if higher consciousness always crops up. In fact, there are good reasons for thinking that the evolution of humanoids was not only not inevitable, but was a priori improbable. Although convergences are striking features of evolution, there are at least as many failures of convergence. These failures are less striking because they involve species that are missing. Consider Australia again. Many types of mammals that evolved elsewhere have no equivalents among marsupials. There is no marsupial counterpart to a bat (that is, a flying mammal), or to giraffes and elephants (large mammals with long necks or noses that can browse on the leaves of trees). Most tellingly, Australia evolved no counterpart to primates, or any creature with primate-like intelligence. In fact, Australia has many unfilled niches–and hence many unfulfilled convergences, including that prized “humanoid” niche. If high intelligence was such a predictable result of evolution, why did it not evolve in Australia? Why did it arise only once, in Africa?

This raises another question. We recognize convergences because unrelated species evolve similar traits. In other words, the traits appear in more than one species. But sophisticated, self-aware intelligence is a singleton: it evolved just once, in a human ancestor. (Octopi and dolphins are also smart, but they do not have the stuff to reflect on their origins.) In contrast, eyes have evolved independently forty times, and white color in Arctic animals appeared several times. It is hard to make a convincing case for the evolutionary inevitability of a feature that arose only once. The elephant’s trunk, a complex and sophisticated adaptation (it has over forty thousand muscles!), is also an evolutionary singleton. Yet you do not hear scientists arguing that evolution would inevitably fill the “elephant niche.” Giberson and Miller proclaim the inevitability of humanoids for one reason only: Christianity demands it.

One final note: I argue that the contigency of evolution means that the appearance of humans wasn’t inevitable. How do I reconcile that with my view of physical determinism—that, barring truly indeterminate quantum effects, everything that happens in the universe obeys physical laws, and thus is in principle predictable? Doesn’t that view mean that if the tape of evolution was rerun, humans would appear again, simply as a result of physical law? In Faith Versus Fact, I argue “no,” and for two reasons. First, the raw material for evolution—mutation—is likely to be a quantum phenomenon, both in the nature of replication errors in the DNA and in the cosmic rays that can also cause mutations. Both of those may be fundamentally non-deterministic phenomena, and hence unpredictable in principle. And if the raw material for evolution is unpredictable in principle, then so are its products. That means that if we reran the tape of life, one couldn’t say with any certainty that humanlike creatures would appear.

Second, or so Official Website Physicist™ Sean Carroll tells me, many of the cosmic bodies produced after the Big Bang also resulted from quantum phenomena in the early universe. That means that the Earth and its physical conditions were likely not a result determined at the moment of the Big Bang. Now that doesn’t mean that there isn’t life on other planets—in fact, I suspect there is. But it means that the inevitability of humans evolving on Earth (a tenet of Christian evolutionists like Conway Morris and Miller) isn’t a result of the inevitability of the laws of physics.

If humans really are an inevitable product of evolution, we could in principle test that by looking at life on other planets. For if there is life in those places, it must have been life that evolved. And if it’s life that evolved, then, according to Conway Morris, there will be “humanoid” creatures there, with intelligence similar to ours (or even more advanced), as well as some belief in and worship of God. You can rerun the tape of life on planets other than ours!

74 thoughts on “Simon Conway Morris’s new book on evolutionary convergence. Does it give evidence for God?”