The latest Herman strip, drawn by Jim Unger, shows us one way of accommodationism. And it comes perilously close to those theistic evolutionists—including both scientists and creationists—who accept evolution but say that God either set up the process so that it would be guaranteed to produce Homo sapiens (the view of Simon Conway Morris, whose theory we discussed earlier today), or tweaked evolution from time to time to ensure that we’d appear. 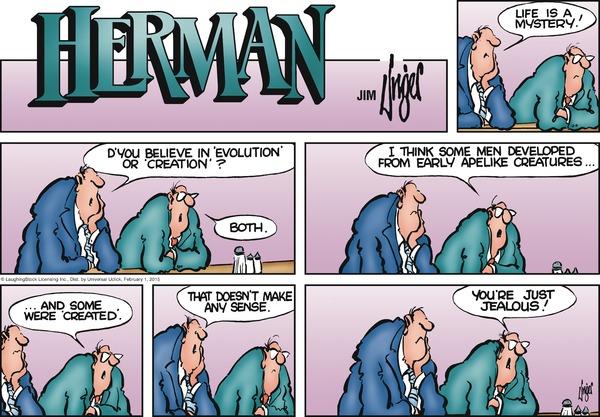 And over at The Onion, there’s a grim report on natural selection (click on screenshot below to see the piece): 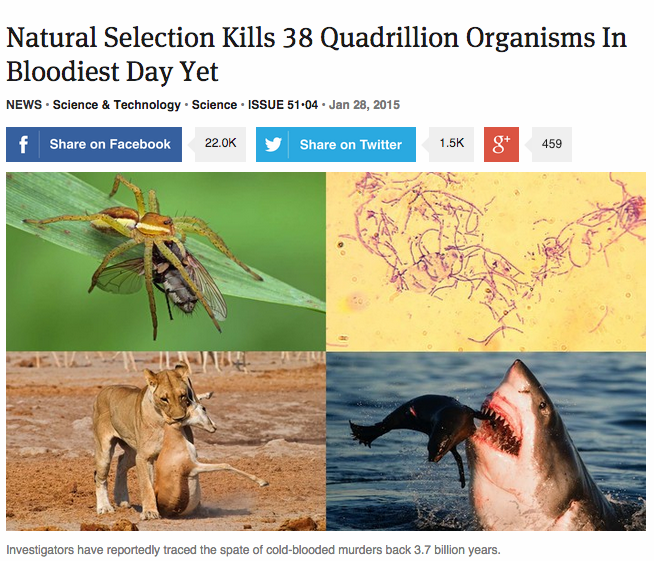 EARTH—In a seemingly unstoppable cycle of carnage that has become tragically commonplace throughout the biosphere, sources confirmed this morning that natural selection has killed an estimated 38 quadrillion organisms in its bloodiest day yet.

Numerous reports from biomes on all seven continents revealed that over the past 24 hours, the ruthless biological phenomenon had ended the lives of a record 360 trillion animals and 908 trillion plants, along with 36.7 quadrillion fungi, protists, and bacteria.

“What we’re seeing here is the work of a hardened, practiced killer,” said Yale University evolutionary biologist Richard Prum, describing the brutal process through which a massive number of victims—among them thousands of starfish, countless patches of moss, and entire colonies of intestinal protozoa—were massacred with little to no warning. “These weak and helpless organisms, all of which appeared to have had no way to defend themselves against this latest wave of violence, were wiped out in cold blood.”

“It is painfully clear this slaughter was perpetrated by a force that holds zero regard for the value of life,” Prum added . . .

What’s curious is that there really is an evolutionary biologist at Yale named Richard Prum. I wonder if he really said that stuff (in jest, of course). They also quote a “University of Calcutta zoologist” who appears to be fictitious. Jeez—they’re making stuff up!