I’m seeing these signs all over Hyde Park, the part of Chicago where I live: 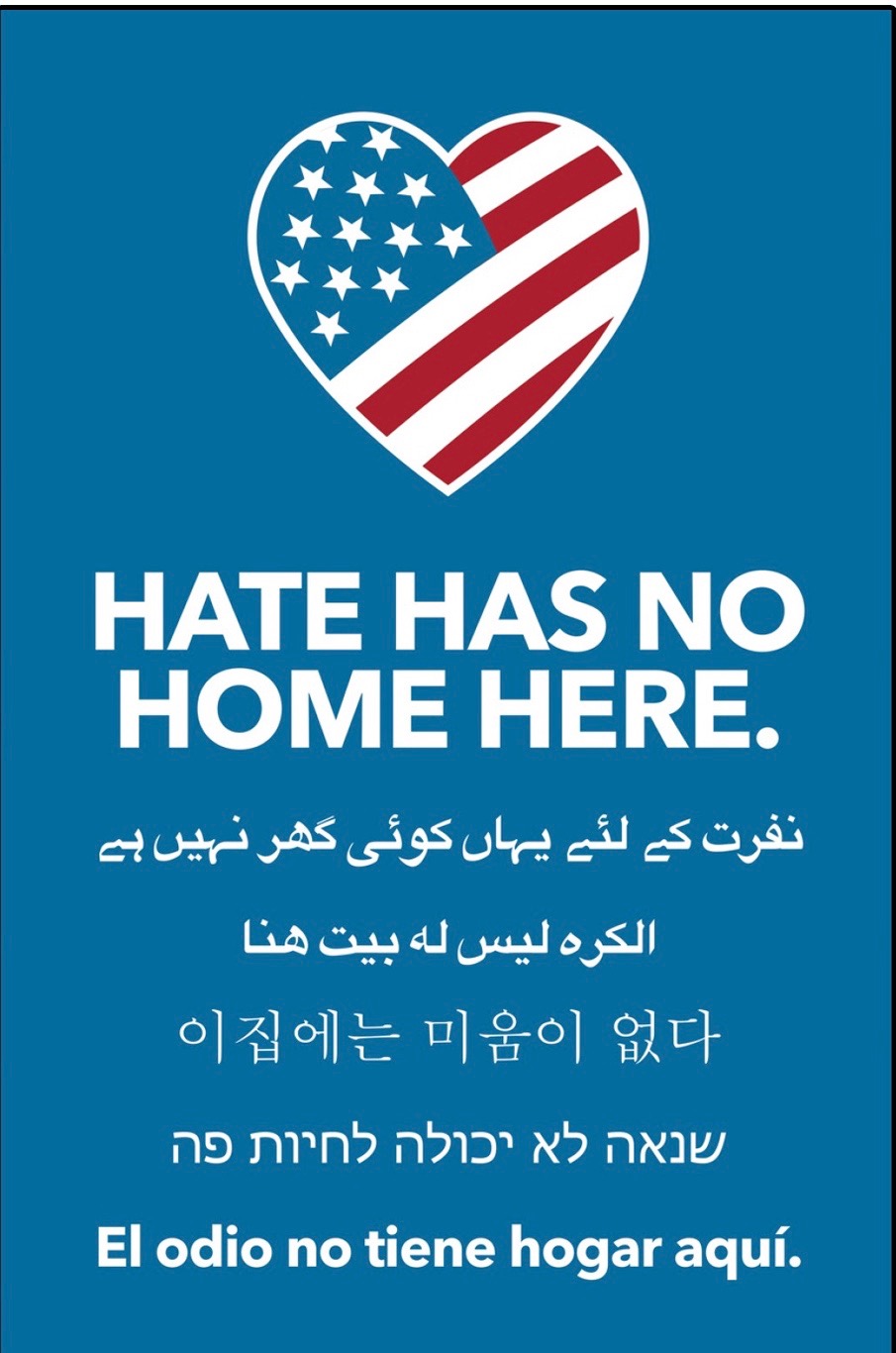 And of course they’re supposed to be signs of inclusivity and welcome, which is good. But are they sincere? According to Frank Bruni’s editorial in today’s New York Times, they’re not always true for the Left. Bruni is distressed by this editorial that appeared in the Texas State University (San Marcos) student newspaper, an editorial I wrote about before: 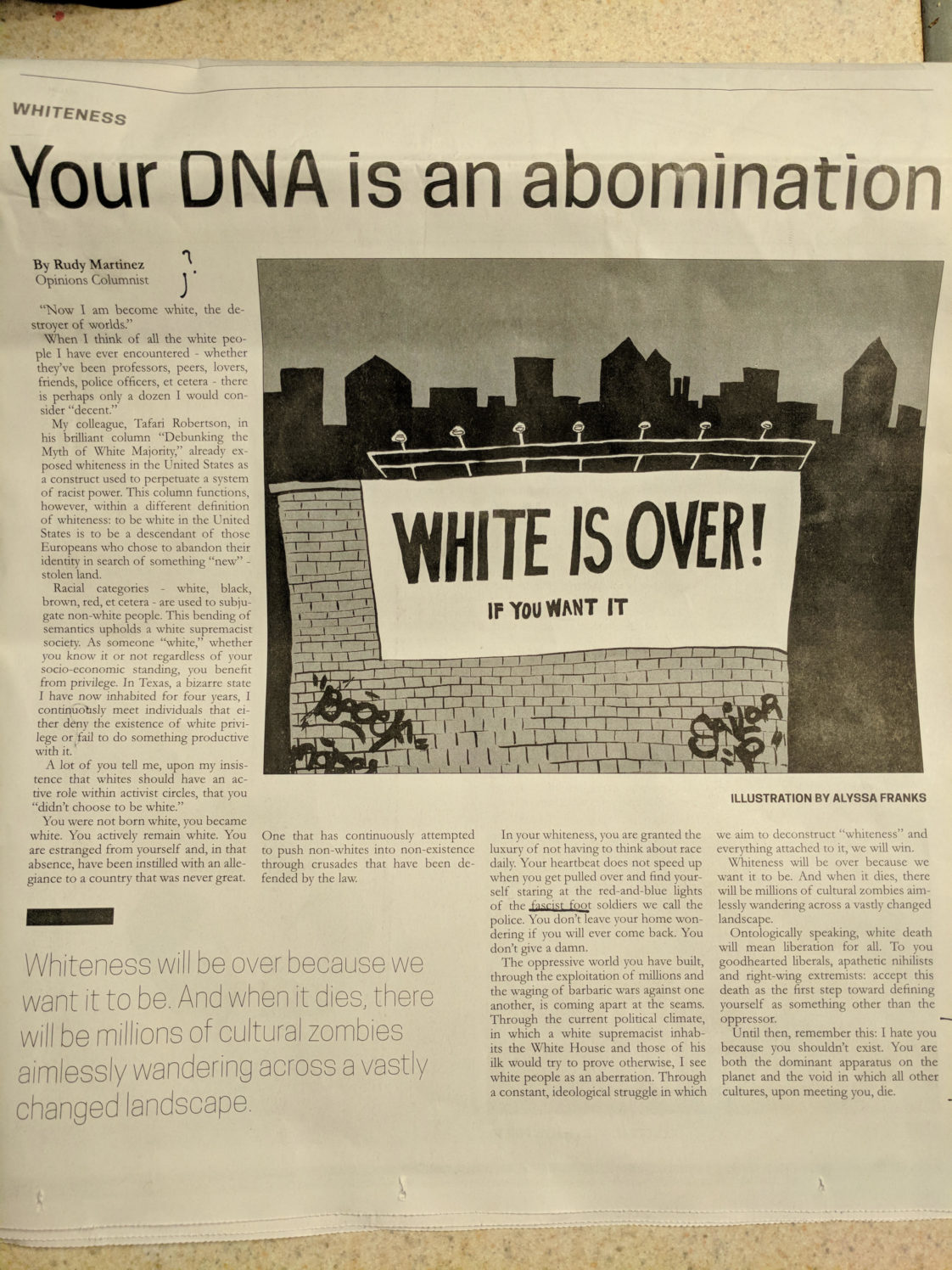 If you go to my original post, where you can read it, you’ll see it’s by Rudy Martinez, a Hispanic student who claimed that he almost never met a decent white person, as he sees the vast majority of them as privileged racists. The college op-ed was taken down, but Bruni’s piece, “An Abomination. A monster. That’s me?“, calls out not only the hatred (racism, really) of the author, but argues that such views play into the hands of Trumpian conservatives since “mirroring the ugliness of white nationalists and the alt-right just gives them the ammunition that they want and need.” And I think he’s right here, as things like this editorial, or the shenanigans of liberal students when people like Ben Shapiro, Christina Hoff Sommers, or Charles Murray try to speak, just let the Right broadcast that we’re violent, narrow-minded, bigoted, intolerant, and all the things we dislike about the Right.

Bruni says this about the column above:

Yes, this was deliberate provocation. By a college student. And he’s obviously right that people of color have been systematically oppressed.

But what college newspaper would have published a column by a white student telling his black peers that they’re a wretched lot? What, beyond catharsis, did the column’s author accomplish?

And what has happened to our discourse — and how we do we make necessary progress — when hate is answered by hate, prejudice is echoed by prejudice, extremism begets extremism and ostensible liberalism practices abject illiberalism? Isn’t that how Donald Trump wins?

This wasn’t just one student or one campus or college campuses in general. This was a manner of thinking and language too prevalent among those who correctly call out racial inequities and social injustices but wrongly fall prey themselves to the bigotry behind those ills.

The far right set the tone, but the left shouldn’t adopt it. Doing so won’t get us to the fairer place that we must inhabit, and it plays directly into Trump’s dirty hands.

Bruni gives several examples of this kind of behavior (my words, not his quotes):

Feinberg has not been put on leave, and I don’t think the HuffPo has apologized or penalized one of their senior writers (they’d never do that for something like this)—but what a horrible thing to say! I’m not surprised, of course, as HuffPo has, as I often say, been driven literally mad by Trump’s election. But while I disagree with many of McCain’s political views, he’s nevertheless done some good things, like voting “no” on the Obamacare repeal, and I think he’s a decent man. To celebrate his terminal illness, or to use it as political snark, is unconscionable.

And just yesterday I saw on my Facebook page a remark by someone who, commenting on speculations that Donald Trump is ill because he’s recently slurred his speech, remarked that he hoped that Trump was really sick and died a horrible death. Much as I dislike Trump and what he and his administration are doing, I wouldn’t wish that kind of suffering on anybody or his family.

As Bruni says, a lot of this is promoted by the nature of social media, which allows you to broadcast your thoughts instantly, unfiltered, and often anonymously, and to say things to the world that you’d never say in person to another human. Would the Delaware professor tell Otto Warmbier’s parents that he “got what he deserved”? Would Feinberg tell McCain’s family that they should be glad that their inheritance will be tax-free after he dies?

We’re better than this—or should be. We can hate ideas rather than people, and we can behave civilly towards those who espouse ideas we don’t like. We don’t have to be kissy-kissy with white supremacists, of course, but we don’t have to punch them, either.

47 thoughts on “Does hate have a home on the Left?”