Skip to content
A book called Purpose and Desire: What Makes Something “Alive” and Why Modern Darwinism has Failed to Explain it“, by J. Scott Turner, came out September 12, published by HarperOne.  It hasn’t sold very well, despite Amazon recommendations by Intelligent Design advocates and Discovery Institute members Douglas Axe and Stephen Meyer and, amazingly, a starred summary from Kirkus Reviews, implying it’s a book of importance:

Here’s their review (my emphasis):

An exploration of how “there is something presently wrong with how…scientists think about life, its existence, its origins, and its evolution.”

The discipline of biology is in crisis, writes Turner (Biology/SUNY Coll. of Environmental Science and Forestry; The Tinkerer’s Accomplice: How Design Emerges from Life Itself, 2009, etc.) in this ingenious mixture of science and philosophy that points out major defects in Darwinism and then delivers heterodox but provocative solutions. That biology is in crisis may be news to readers, but the author points out that no Darwinian explanation exists for the origin of life or the origin of the cornerstone of modern biology, the gene. Darwinism also has a “hard time explaining what an organism is, or why…living things are actually (not apparently) well-designed.” Aware that alarm bells will sound, Turner denies proposing intelligent design but adds that the obstacle is philosophical: biologists must accept that Darwinian evolution is a “phenomenon rife with purpose, intentionality, and striving.” This is vitalism—not the mystical 19th-century life force but the obvious ability of living organisms to maintain internal consistency in the face of environmental perturbation. Mostly, the book is a virtuosic, if revisionist, history of evolutionary thought that rehabilitates traditionally scorned figures (Jean-Baptiste Lamarck, Georges Cuvier), reinterprets celebrated 19th-century French physiologist Claude Bernard’s ideas on homeostasis, and delivers admiring portraits of the geniuses of modern evolutionary ideas (Lewis Henry Morgan, Ronald Fisher, Sewall Wright, J.B.S. Haldane) without backing down from Turner’s insistence that they missed something. Creationists happily trumpet any criticism of Darwinism as proof that it’s false, but Turner is only proposing that the strictly materialist approach to studying life could use some help. That organisms strive is not magic but an emergent property.

An unsettling but highly thought-provoking book.

Well, no, we don’t have a well-supported Darwinian explanation for the origin of life, but we do have Darwinian explanations that good people are working on (see Nick Lane, Addy Prosser, Gerald Joyce, Jack Szostak et al.), so the claim that there are “no Darwinian explanations for the origin of life (or of the gene)” are simply false. And our lack of understanding, which is due to our not being there when life started, surely doesn’t mean that there’s something wrong with abiogenesis as a naturalistic theory, much less with “materialism.”  I’m not sure what Turner means by “a hard time explaining what an organism is”, but if they mean individuals, then no, we don’t have a hard time with that; they are simply the genome-carrying descendants of an original life form. We also have theories about how multicellularity evolved. And we certainly have explanations for why living things are “well-designed”; it’s called natural selection. But there are glitches in design as well, and those glitches are evidence not for purpose or conscious design, but for mindless evolution constrained to work with the materials it has.

Now what Turner’s evidence is for “purpose, intentionality, and striving” I don’t know, and I suppose I’ll have to read this book (I’ve requested it via interlibrary loan); but these claims have been made over and over again since 1859, and none have stood up.  In fact, the vagaries of evolution, the fact that it goes off in all directions, the pervasiveness of extinction, and the flaws in organismal “design”, all argue against some teleological basis for evolution.  “Homeostasis”—the ability of an organism to maintain aspects of its function or morphology in the face of environmental changes—is not something mystical, but a result of selection itself: organisms face varying and often unpredictable environments, and have evolved ways to deal with these so they don’t lose reproductive output (growing fur when it’s cold, spines if you’re a rotifer in a pond with predatory fish, and so on). That this can happen is evidenced by our ability to select for greater or lesser degrees of homeostasis, showing that it has a genetic basis and thus could be subject to selection.

The materialist (i.e., naturalist) approach to studying life hasn’t ever needed help, for no problem has ever been solved in biology by assuming that there’s some external, non-materialistic purpose behind it all.

Why Kirkus gave this one star is a mystery to me. Perhaps I misunderstand these blurbs (I doubt it), but I’ll find out for myself. 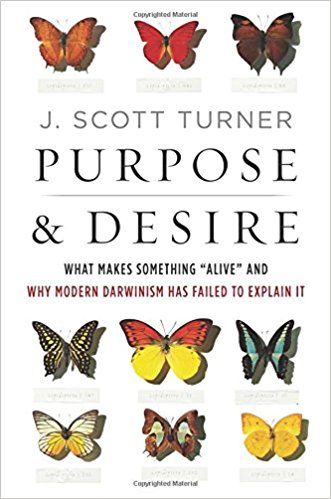 Here’s the Amazon summary (my emphasis):

A professor, biologist, and physiologist argues that modern Darwinism’s materialist and mechanistic biases have led to a scientific dead end, unable to define what life is—and only an openness to the qualities of “purpose and desire” will move the field forward.

Scott Turner contends. “To be scientists, we force ourselves into a Hobson’s choice on the matter: accept intentionality and purposefulness as real attributes of life, which disqualifies you as a scientist; or become a scientist and dismiss life’s distinctive quality from your thinking. I have come to believe that this choice actually stands in the way of our having a fully coherent theory of life.”

Growing research shows that life’s most distinctive quality, shared by all living things, is purpose and desire: maintain homeostasis to sustain life. In Purpose and Desire, Turner draws on the work of Claude Bernard, a contemporary of Darwin revered among physiologists as the founder of experimental medicine, to build on Bernard’s “dangerous idea” of vitalism, which seeks to identify what makes “life” a unique phenomenon of nature. To further its quest to achieve a fuller understanding of life, Turner argues, science must move beyond strictly accepted measures that consider only the mechanics of nature.

A thoughtful appeal to widen our perspective of biology that is grounded in scientific evidence, Purpose and Desirehelps us bridge the ideological evolutionary divide.

Again, homeostasis can easily evolve by natural selection, and needn’t reflect “purpose and desire”, which is either a teleological force within organisms or some external intelligence guiding the process.  It’s not surprising that this book was recommended not by biologists, but by members of the Discovery Institute.

One thing is for sure: people just love hearing that “evolutionary theory is wrong.” What is behind this seemingly wonky endeavor? Yep, you guessed it (my emphasis). As Wikipedia notes:

[Turner] is an adviser to the Microbes Mind Forum and Professor of Biology at the State University of New York College of Environmental Science and Forestry (SUNY-ESF) in Syracuse, New York. Under a grant from the Templeton Foundation, he has been a visiting scholar at Cambridge University, writing his third book, currently titled “Biology’s Second Law: Evolution, Purpose and Desire”, which builds the case that evolution operates through the complementary principles of Darwinian natural selection (biology’s “First Law”) coupled to homeostasis(biology’s “Second Law”).

Turner himself verifies the source of the dosh: “The writing of this book is funded through the generosity of the John Templeton Foundation.”

There’s nothing that Templeton likes better than to marinate science in teleology, and to show that evolutionary theory is wrong in fundamental ways. Nevertheless, prominent biologists continue to swill from the Templeton trough.